Of the six new 2017 Pulsar motorcycles, refreshed to different extents by Bajaj Auto, the Pulsar 135 LS has received the most number of cosmetic changes. And it’s important not just from a ‘number of changes made’ perspective, but from a positioning viewpoint too.

The Pulsar 135 LS (Light Sport) motorcycle, which was first launched in late 2009 was a nippy, nimble option, primarily for youngsters who were keen on straddling the wide bay between the 100cc econo-commuter and 150cc sporty bike. The 135LS was a fresh new concept, what with its 4valve configuration and potent performance for its size. 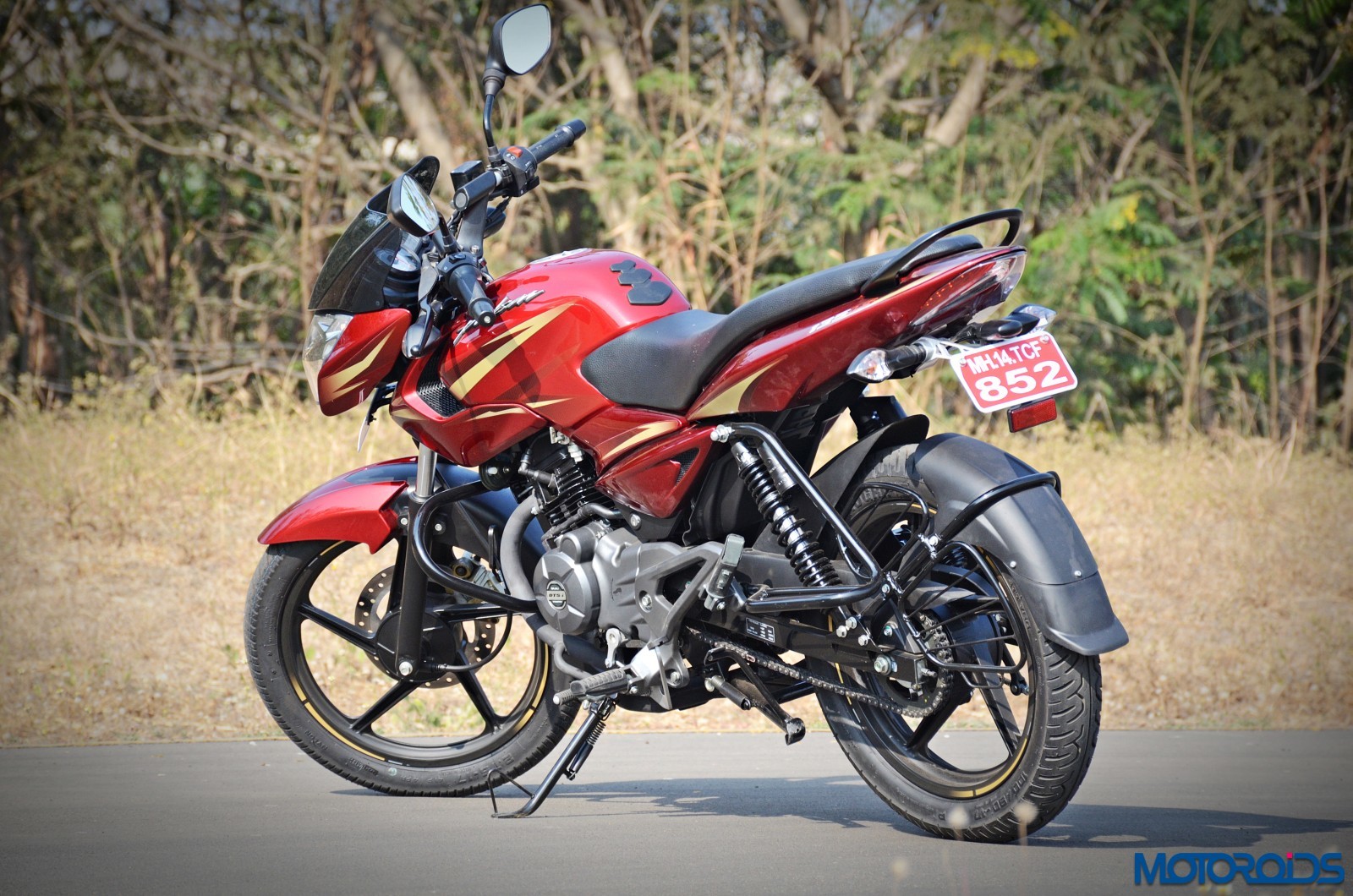 It sold well too, initially, before turning into a not-so-significant model for Bajaj. Bajaj hasn’t given up on this one, though, and has been constantly listening to customer feedback. It appears that the carefree, bare form of the motorcycle didn’t go down too well with some of the potential buyers.

Changes were suggested by a wide majority of survey respondents, suggesting a lean towards a more comfortable, practical, commuter-friendly demeanour for the bike. Bajaj listened carefully, and has duly obliged by incorporating the suggested changes. What we have, thus, is the 2017 version of the Pulsar 135 LS, which obviously retains the LS branding, but now tries to please the practicality seeker, and not the thrill thirsty. Let’s unravel this affair.

So what exactly has changed?

Quite a few things. First off, the tiny windscreen on the original 135LS has given way to a bigger screen capable of deflecting a larger volume of air, though still largely ineffective in offering protection from opposing air at speed. 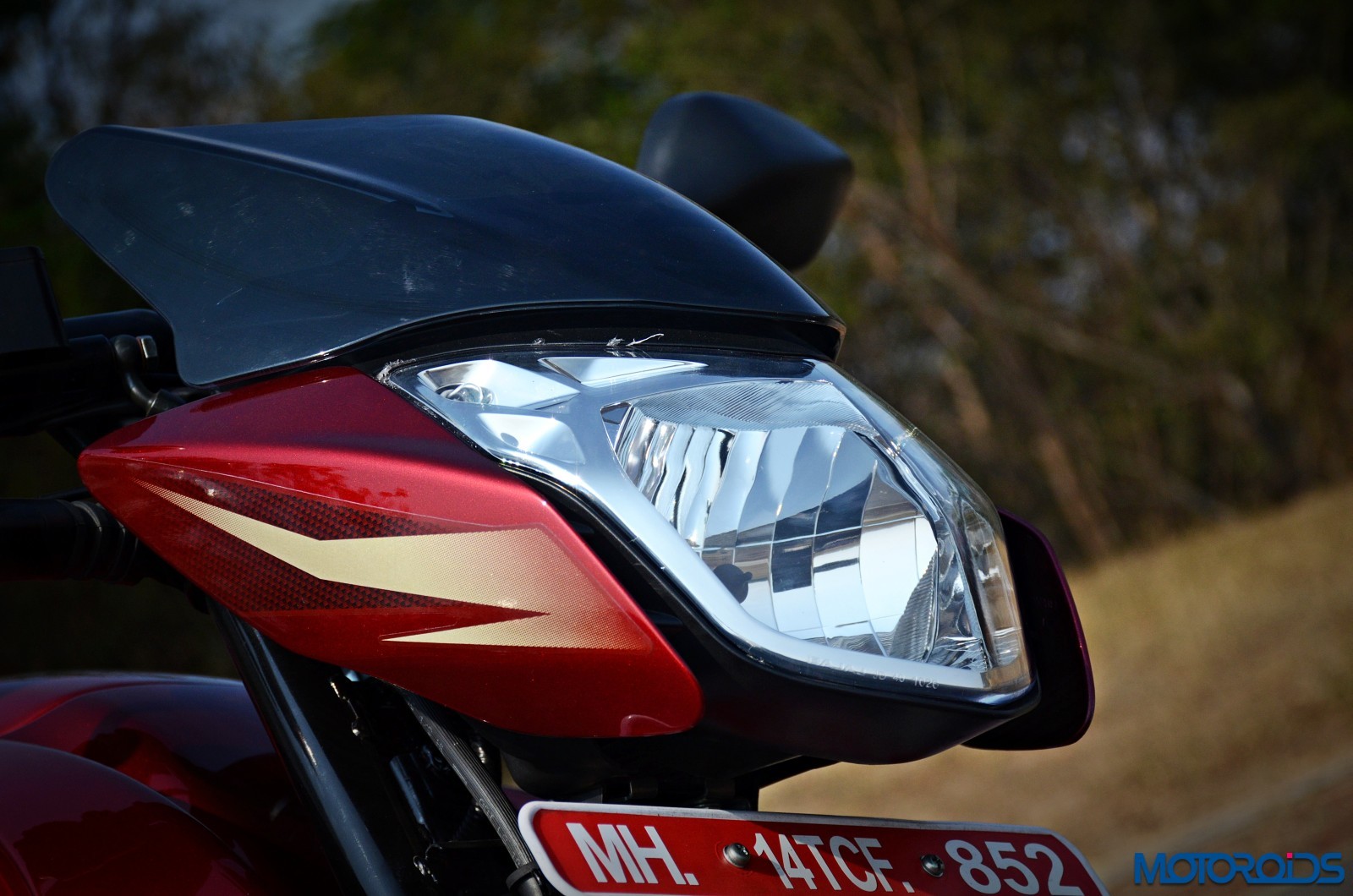 The change is courtesy overwhelming feedback by customers who want that screen for various reasons, including ‘a place for putting a cleaning cloth’, ‘ full crown for their bike’s head’ and for some, wind protection too. Whatever the reasons, Bajaj has reasons to believe the suggestion mattered and so the front screen is now bigger. 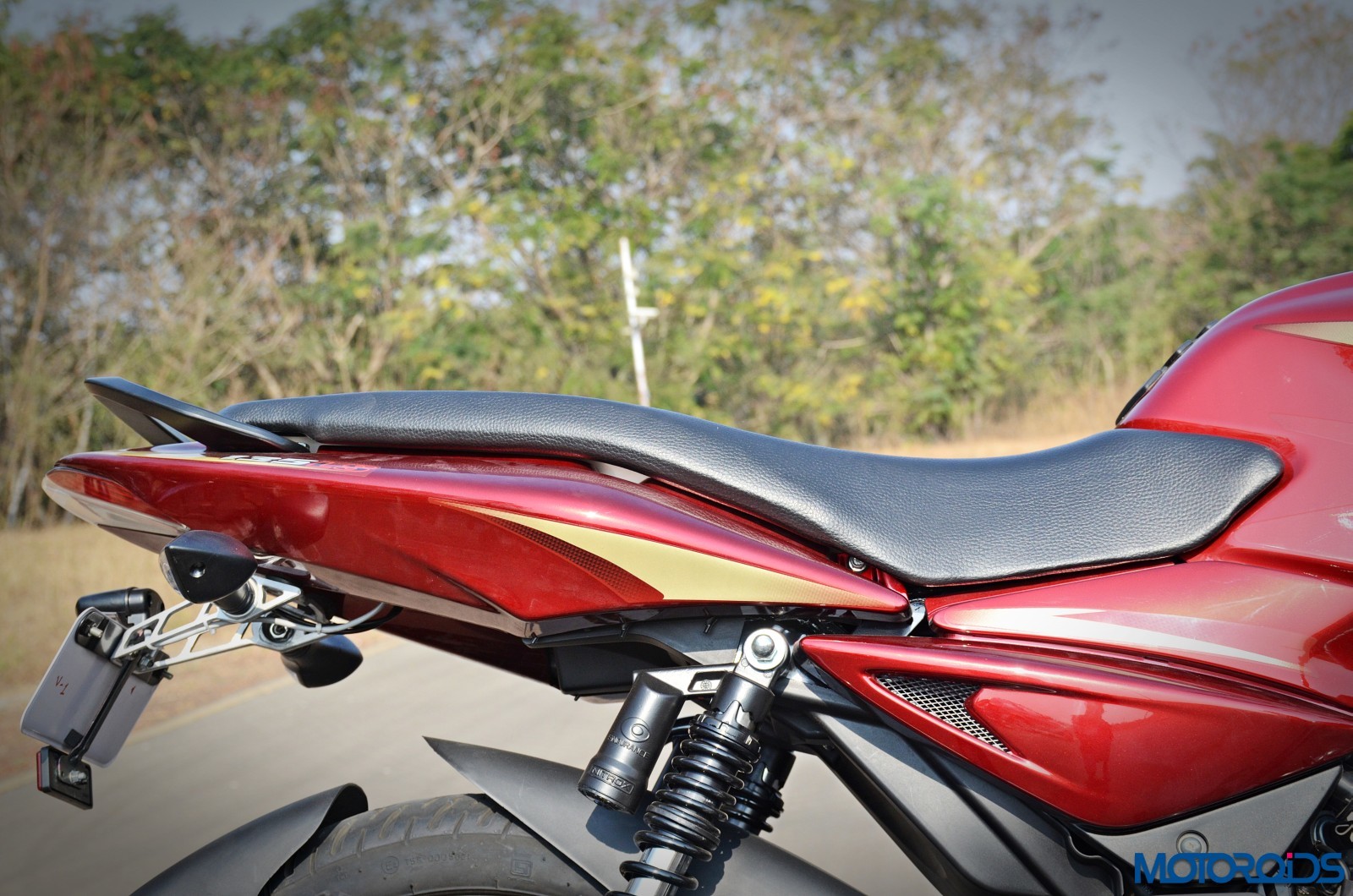 Secondly, the sporty split seat aimed at the youth has been transformed into a long, cushy, well contoured unit for enhanced comfort. Another practicality oriented input given by a large audience. 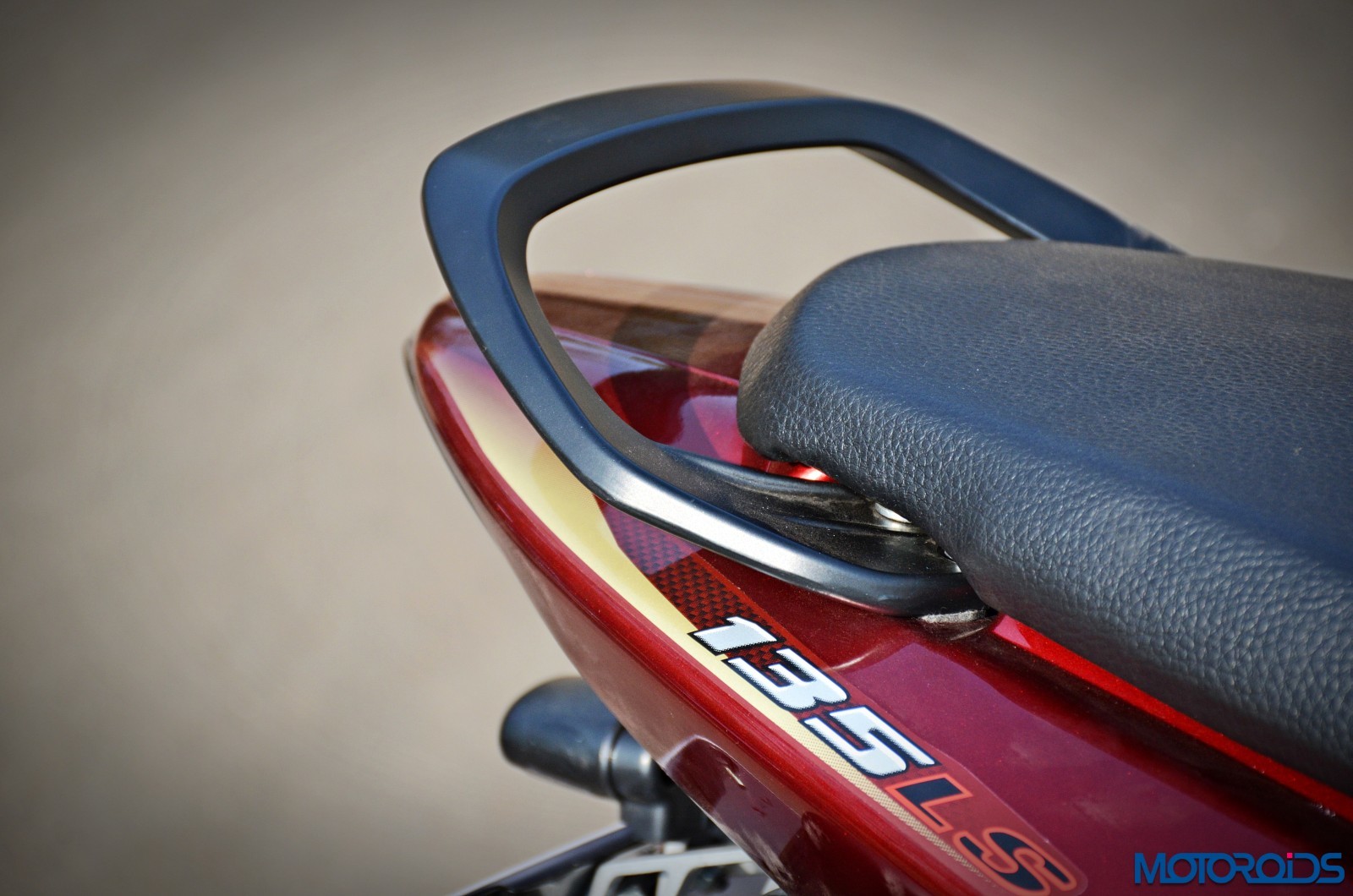 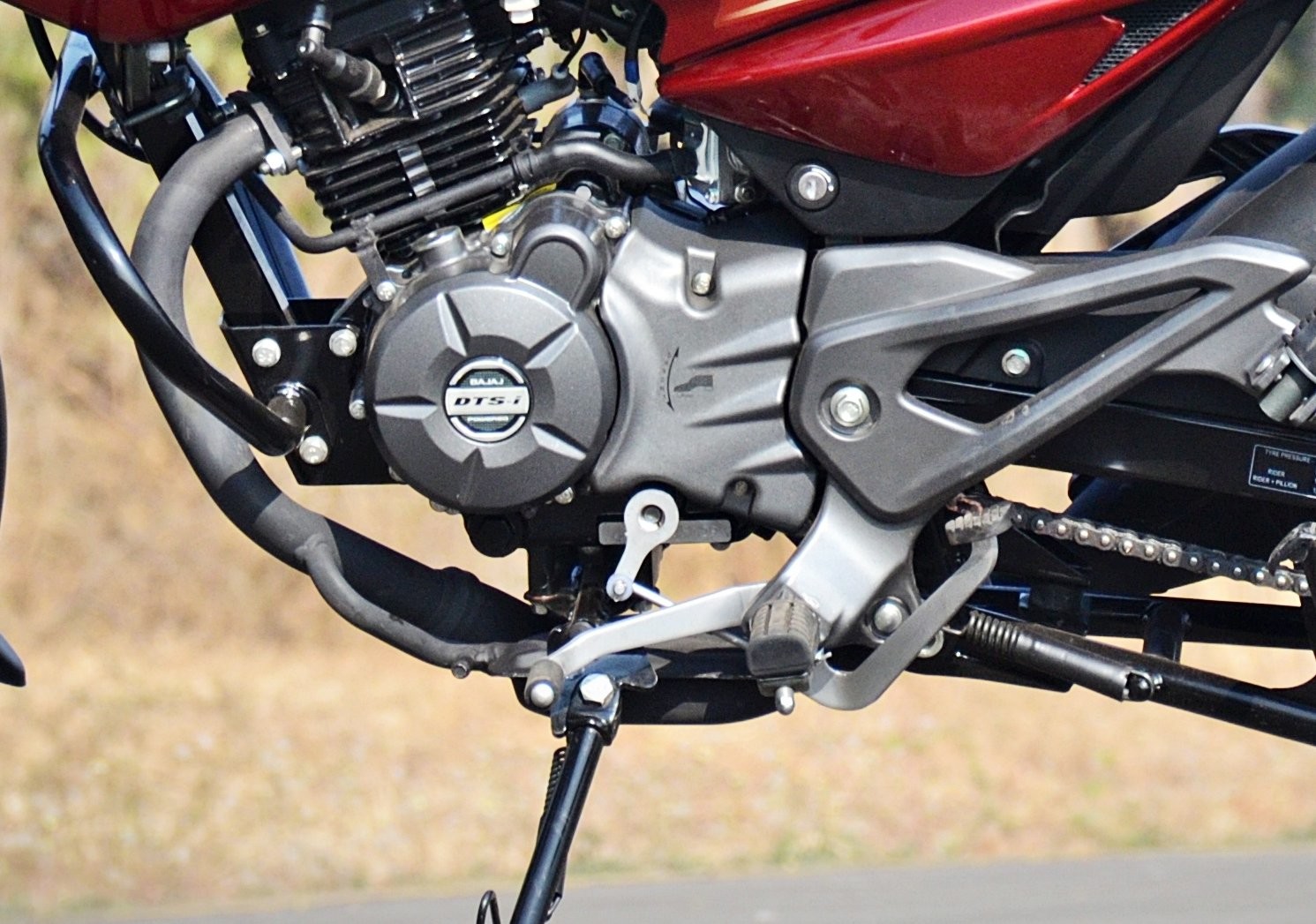 Similarly, a heel-toe shifter has made a rather dashing entry, literally kicking out the toe only unit. 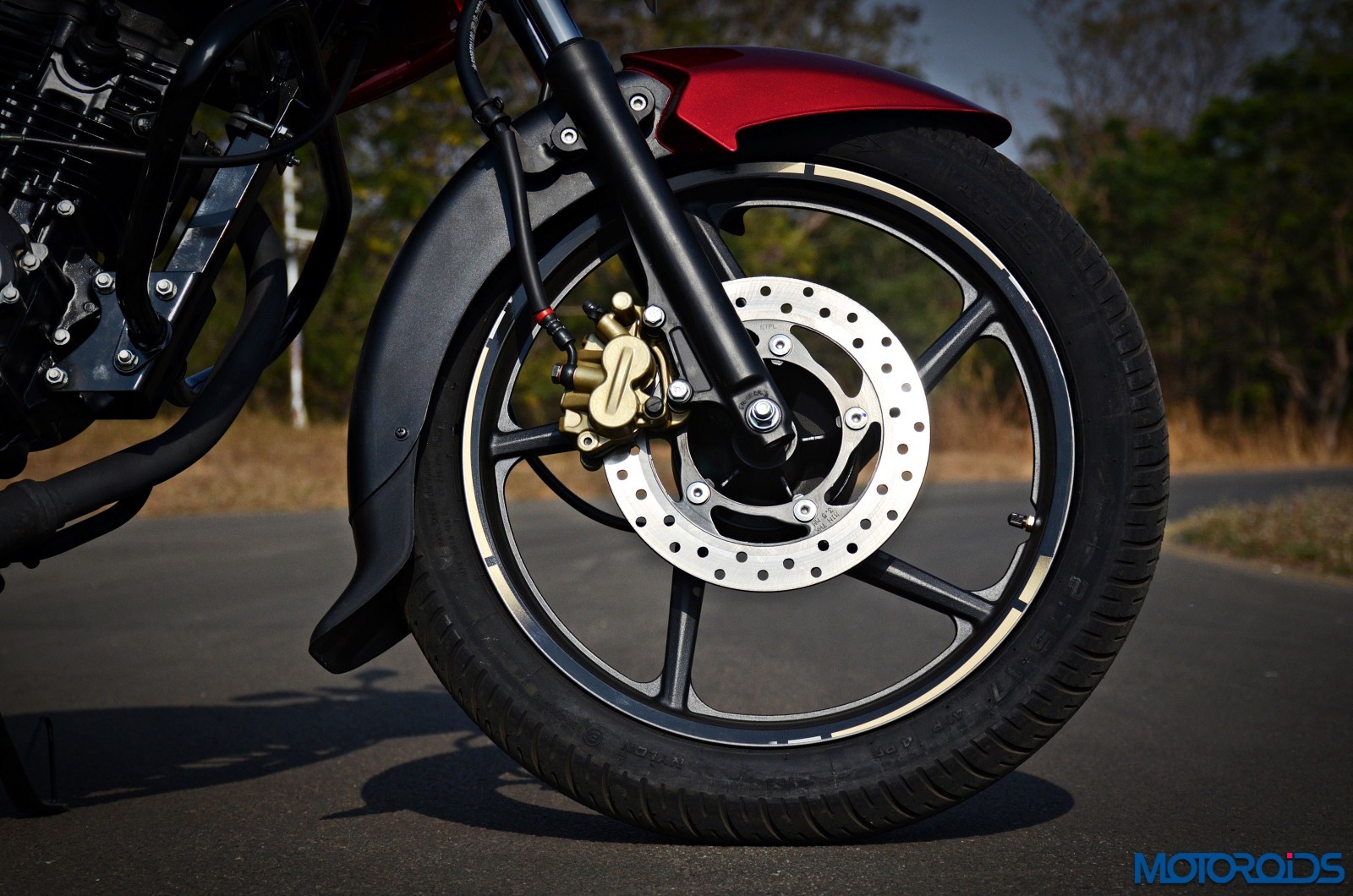 On the flip side, though, the wheels get sporty part pin striping, though it’s a change that almost the entire 2017 Pulsar line up has witnessed. 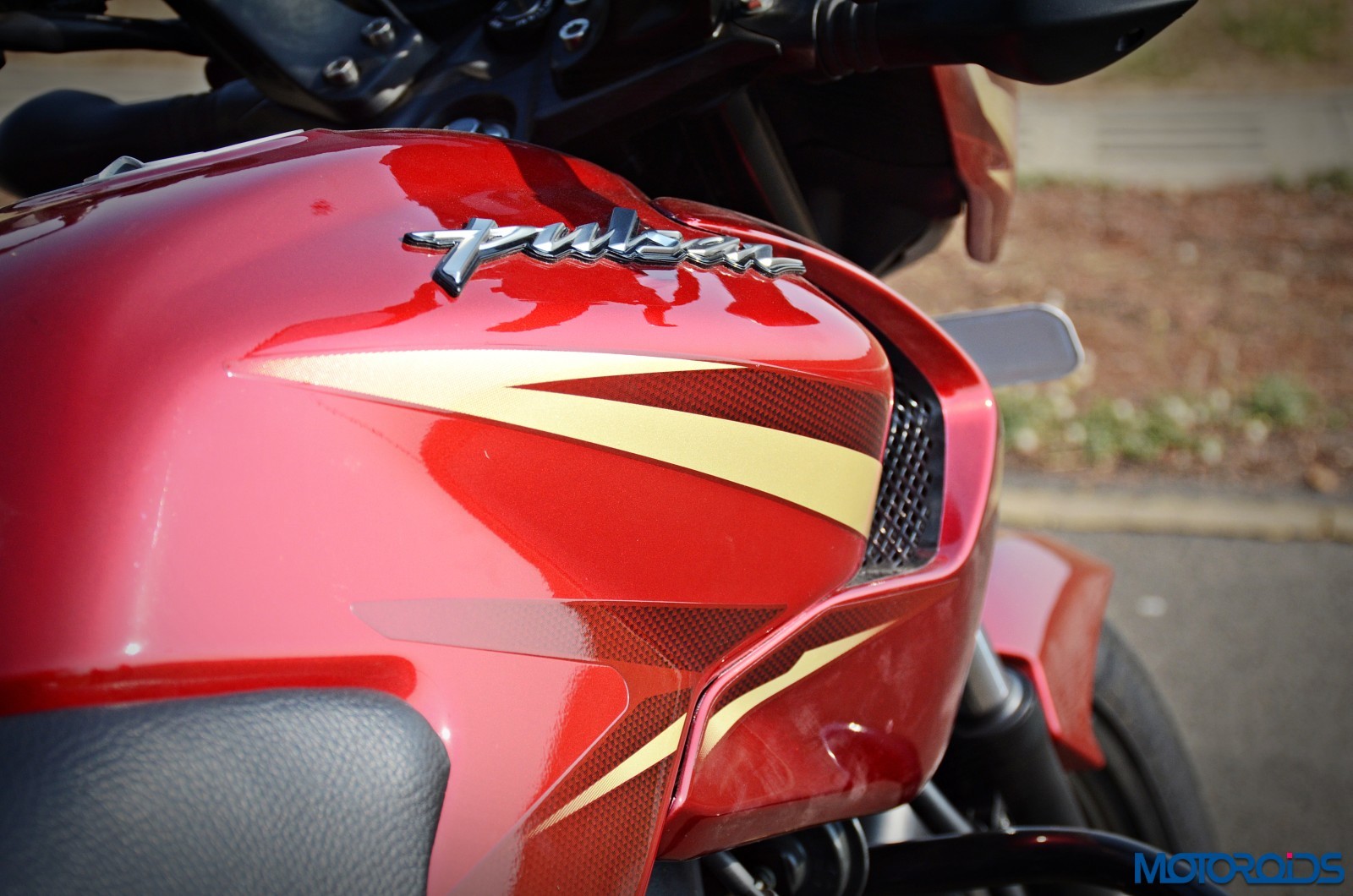 The bike received news colours and graphics as the rest of the range although the panels remain unchanged. 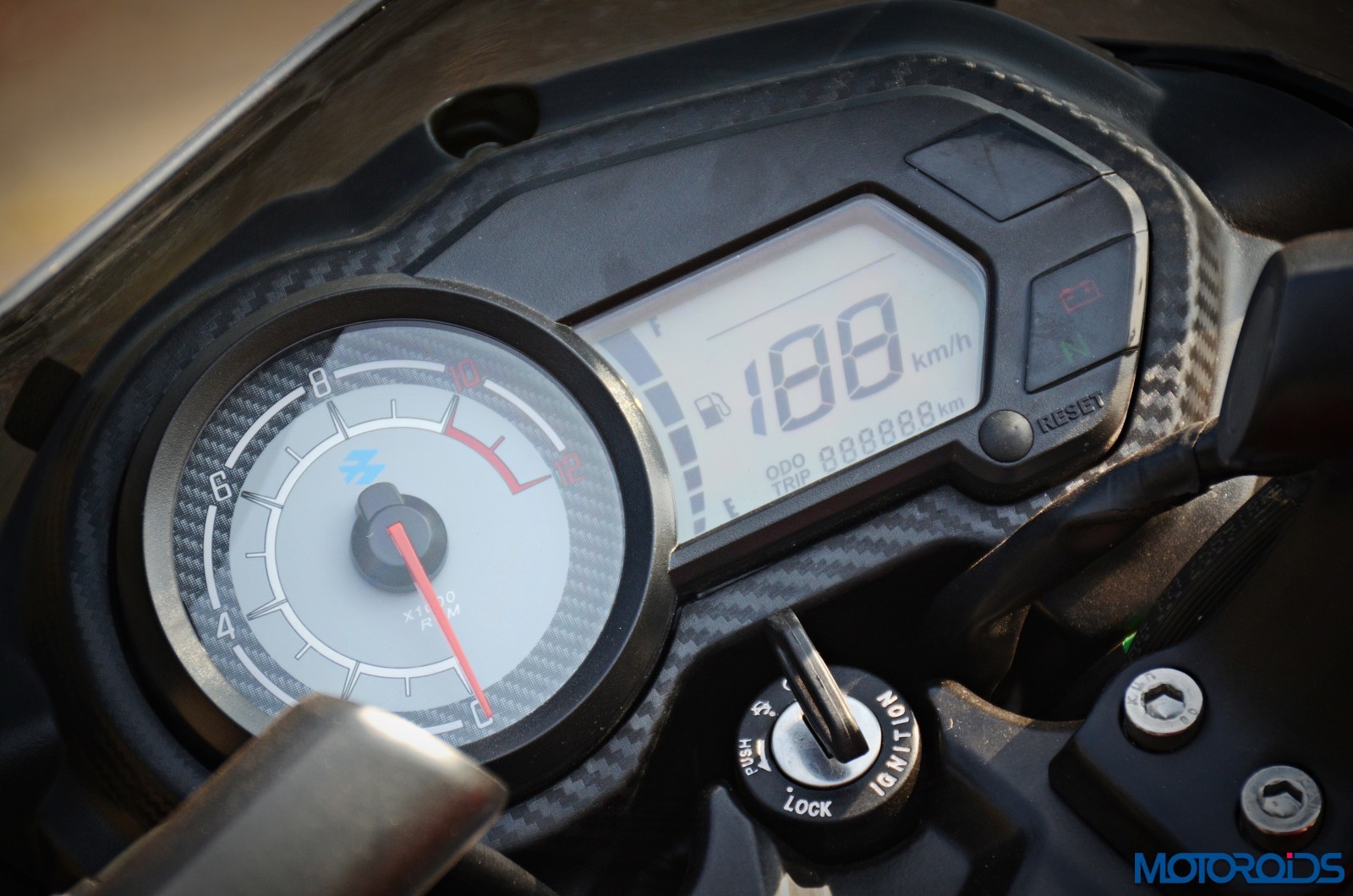 Instrument console gets a refresh with a two-tone faux carbon-fibre and grey dial for the tacho . 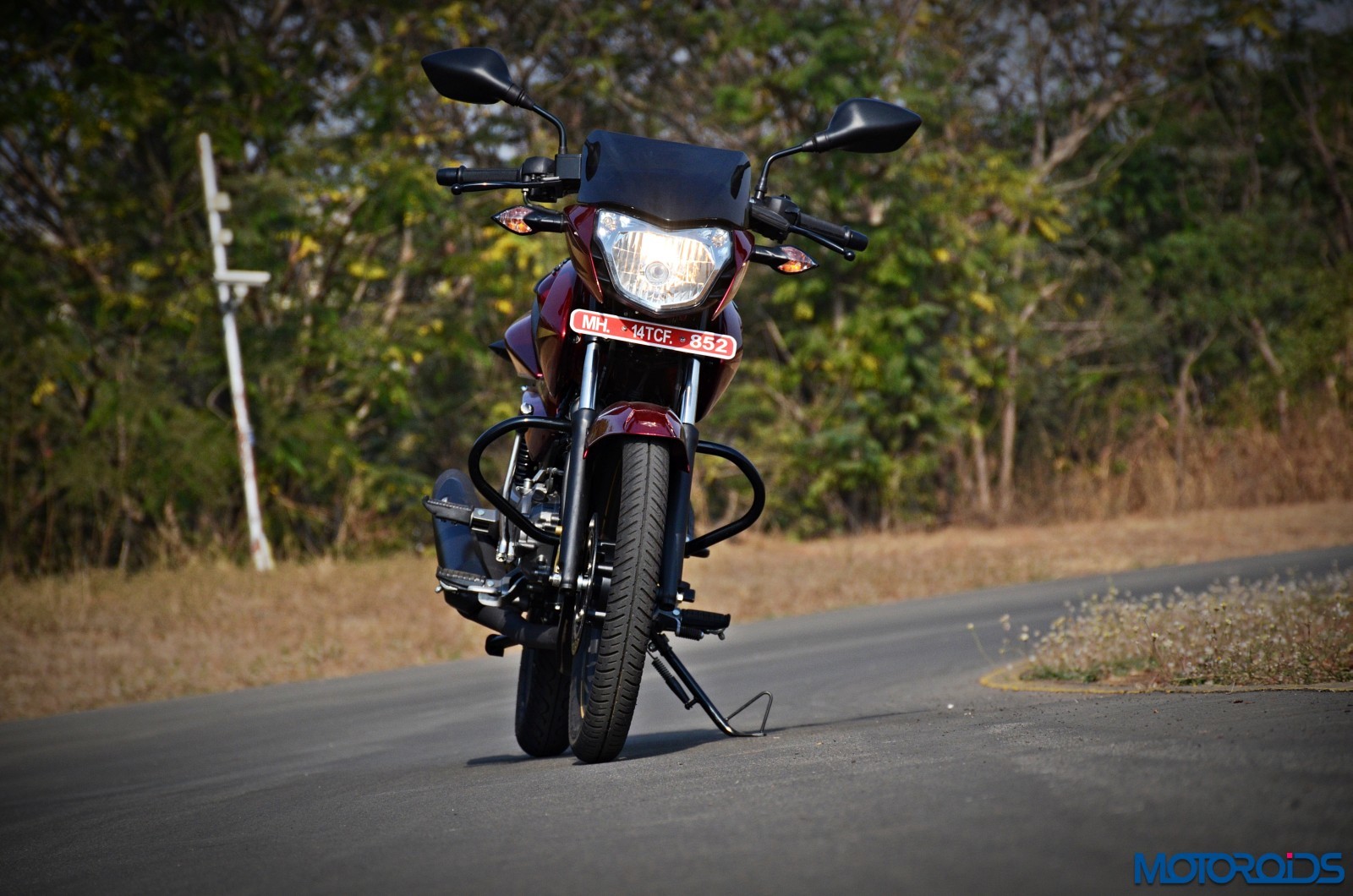 Auto Headlamp On, as on the rest of the line up, is standard and so is the BSIV compliance which in turn means EVAP and SAI, explained in our other 2017 Pulsar reviews are also standard.

Also, as is the case with all the 2017 Pulsars with carburetion, the old CDI has been given the boot in favour of an all new 5 map CDI which senses engine load more accurately and in turn allows for a more precise air-fuel mixture for more refinement and smoothness especially at lower revs. 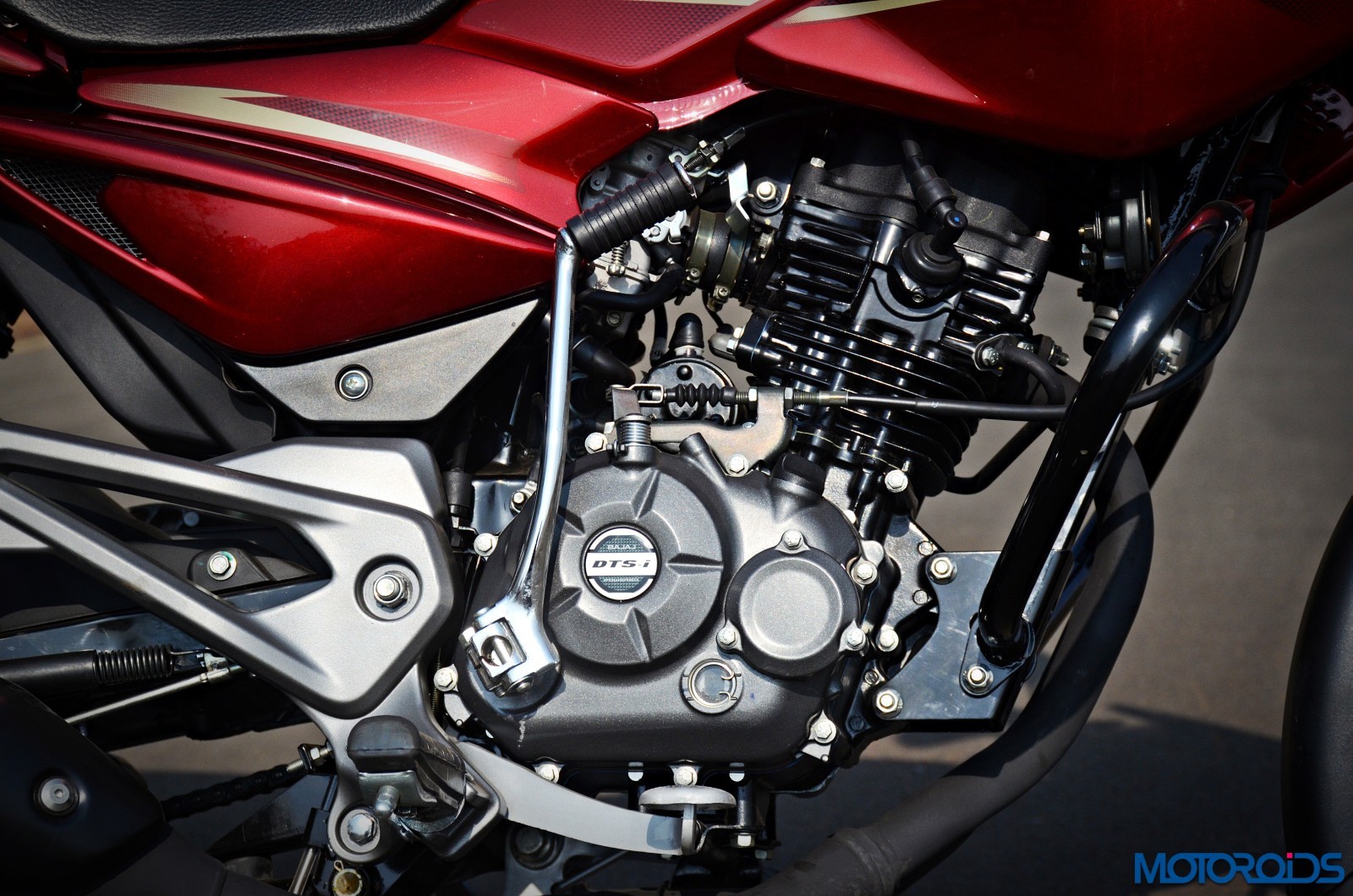 Power output remains unchanged at an impressive 13.6 PS@9000 rpm, and so does the torque output at 11.4 NM at 7500 revs. The weight may increase by a kilo or so owing to the additional catalytic convertor components, but practically it’s not going to have any effect on the bike’s performance in any way. 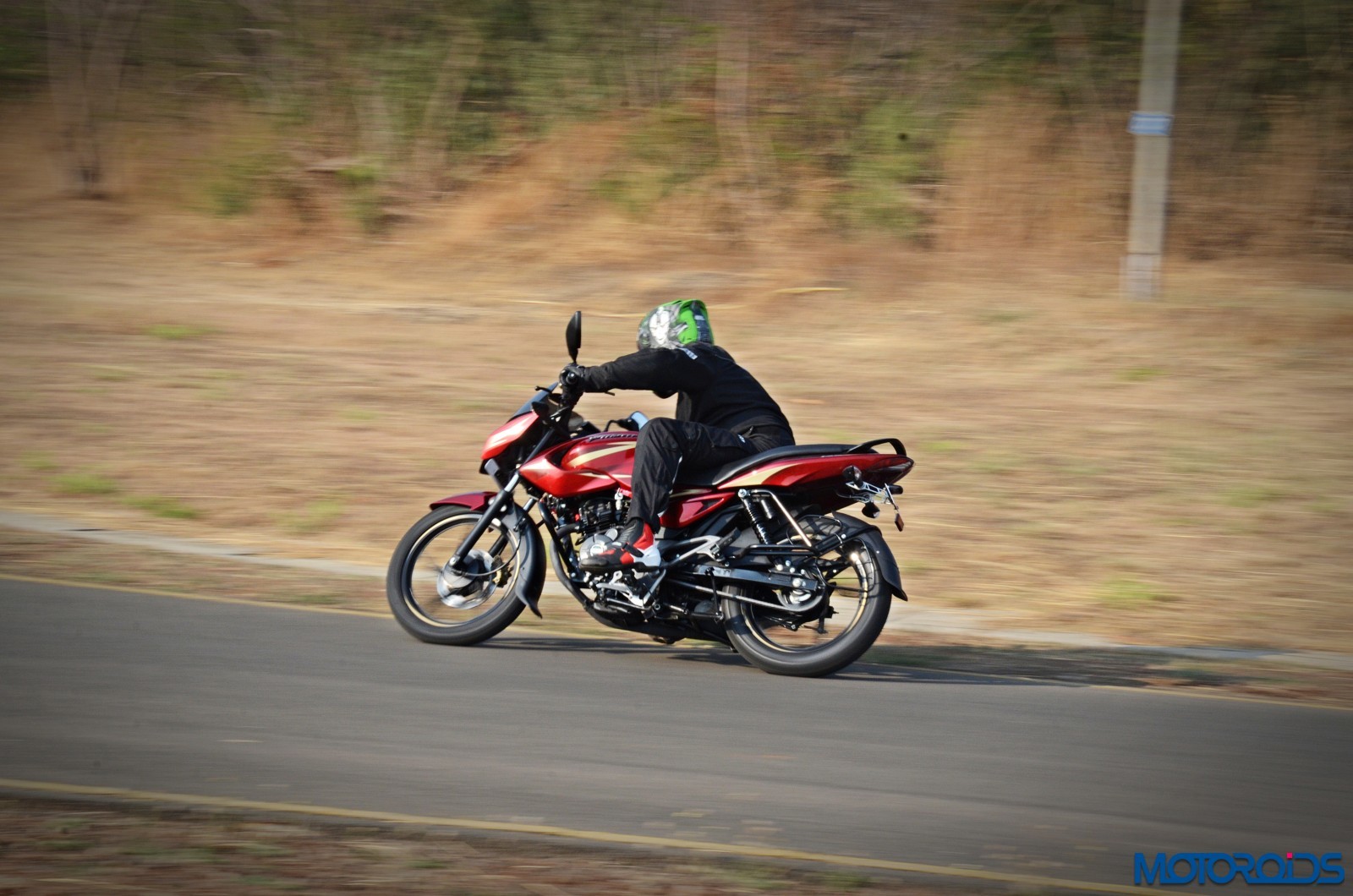 The revvy, 4-valve engine feels smooth and intent and is quite a performer for its class. We rode the 135 LS for a few laps around the Chakan test track, and it felt surprisingly vibe free, revvy and light.

Bajaj is making no bones about the fact that they have tweaked the Pulsar 135 LS to take aim at the Hero Glamour. Modified to a reasonable extent to fit the sensibilities of the comfort oriented commuter, the 135LS suddenly has a new brief. Will it succeed? It’s difficult to tell at this point, especially when we have not ridden the motorcycle on the street. 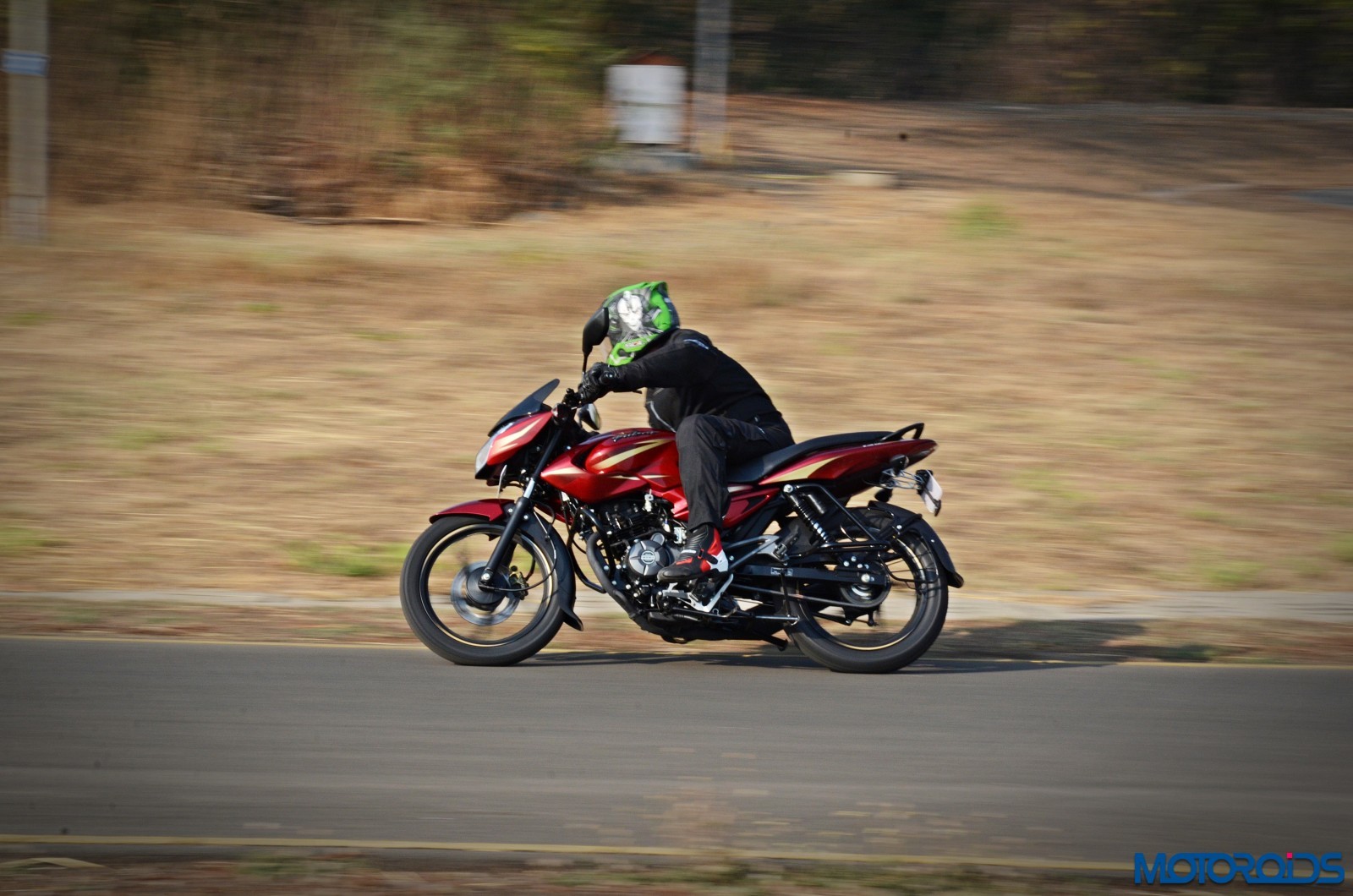 But here’s what we know. Priced at INR 60,178 ex-showroom, the 135 LS is sprightlier than almost anything else in its segment. It’s a grand and a half more expensive than the Glamour, but it boasts substantially more power (4Nm) and reasonably more torque (1 Nm) than its new nemesis. It’s also BS IV compliant which the Glamour isn’t.  However, the bigger question is, does the effervescent 135 LS have the wherewithal to turn clinical and act all sensible overnight? Well, it sure has the capability. But whether it would succeed, we shall soon see.