The 2017 Bajaj Pulsar 150 DTS-i, of the new 2017 Pulsar line-up has witnessed the biggest mechanical change over its 2016 version. Unlike most other 2017 Pulsars which have received only cosmetic changes along with a few other alterations to help comply with the BSIV norms, the 2017 Pulsar 150 DTS-i gets a comprehensive engine overhaul. You read it right – the new Pulsar 150’s engine is quite different from the one it replaces. So if you are looking at buying the Pulsar 150, ensure that you go for the all new 2017 version. Here’s all you need to know about the latest iteration of one of the bestselling 150s ever

The 2017 Bajaj Pulsar 150 DTS-i is probably the last upgrade to this 150cc workhorse that gets the credit for making Bajaj Auto what it is today. The original Pulsar 150, along with its 180 sibling was the machine that set the aspirations of young Indian motorcyclists afire in its heydays. It’s still selling in good numbers, though, and this latest upgrade is probably the last refresh before the bike gets a complete model overhaul. 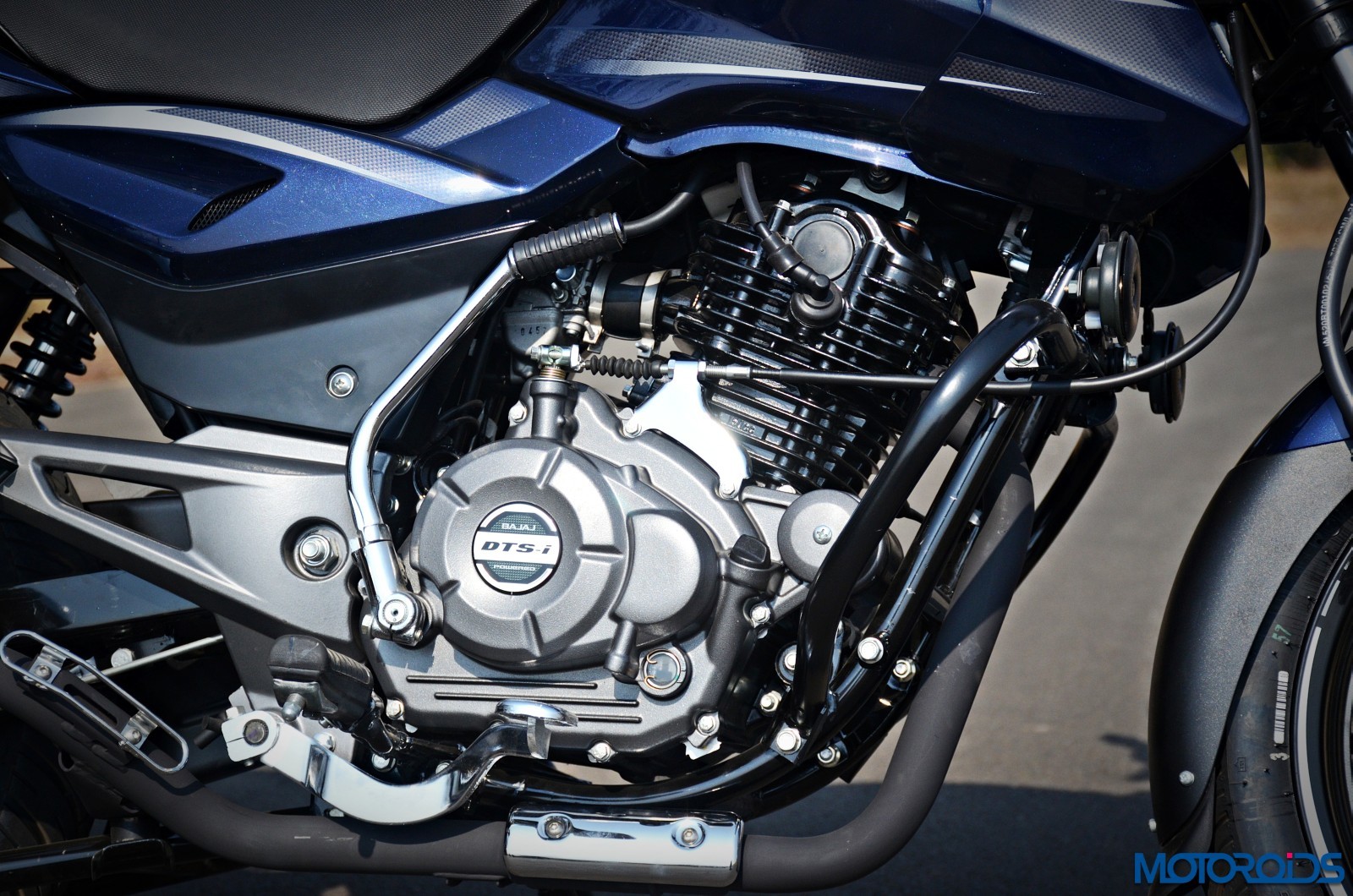 For the 2017 version, the boffins at Bajaj have worked extensively on the engine of the Pulsar 150. While it’s not a huge visual departure from the model it replaces, the team at Bajaj insists that an enormous amount of hard work has gone into overhauling that powerplant, and that looks don’t do justice to the extent of changes this machine has received.

To start off, the engine has now been reconfigured with a smaller bore and a longer stroke than before. For anyone who understands motorcycles, the clearest effect of that change would be more torque and better driveability at lower engine speeds. And so it is. The peak torque output on the 2017 Pulsar 150 DTS-i is now rated at 13.4Nm @ 6000 rpm, which is an increment of 1Nm. On the flip side, the peak power is now pegged at 14PS @8000 rpm which is 1 PS less than the model it replaces.

It’s not just the bore and stroke that has changed, though. The bottom part of the engine has undergone some more changes, and now shares components like crankshaft bearings with its bigger sibling, the 180 DTS-i. All of this has been done to improve refinement, achieve better low-end driveability and reduce NVH levels significantly. 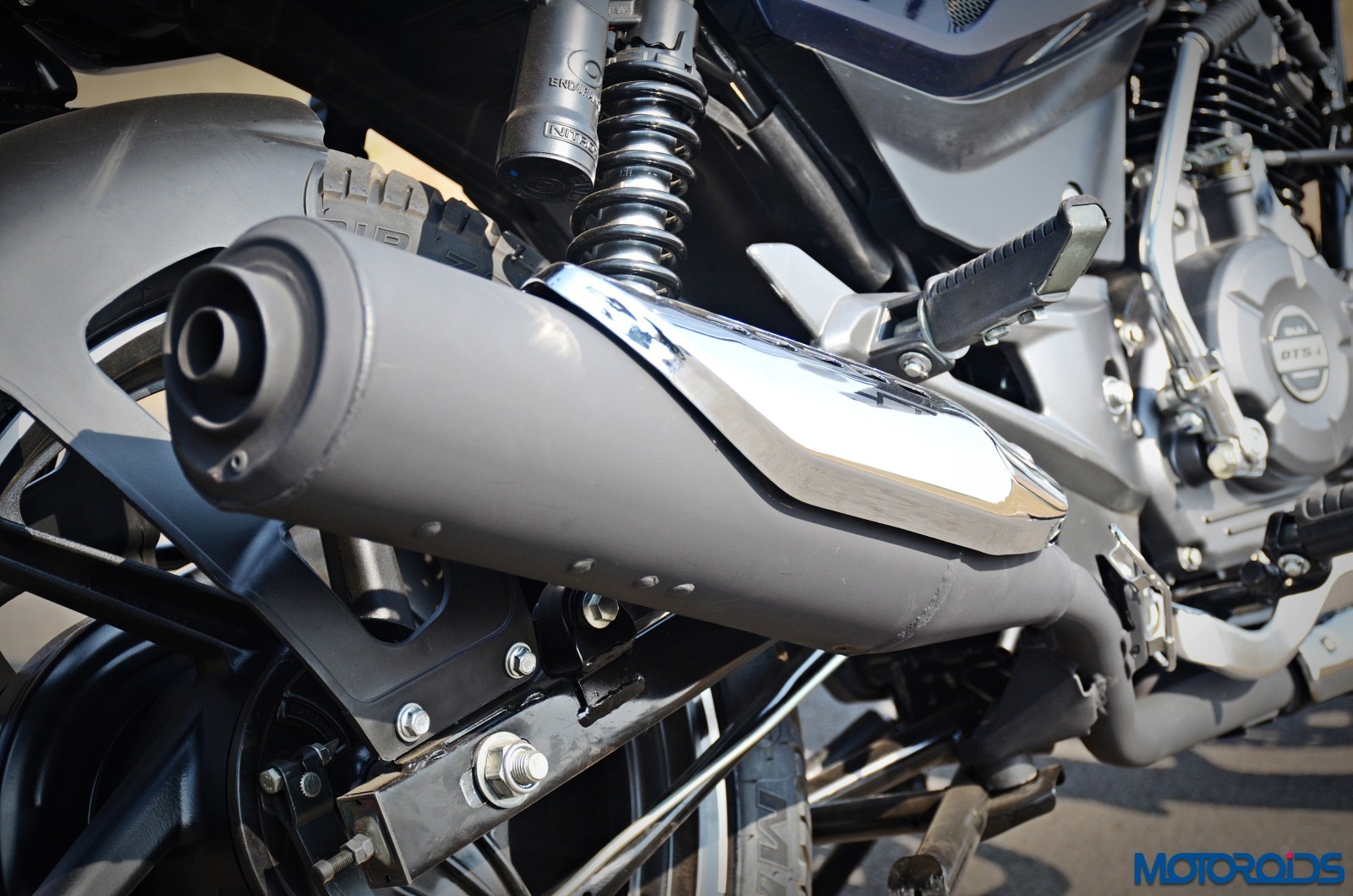 In addition to the changes made to the engine, the exhaust is now different with a bigger diameter for muffler, probably to make space for the enhanced catalytic converter. The clutch on the bike now boasts lower drag allowing for more fluid and precise gearshifts. 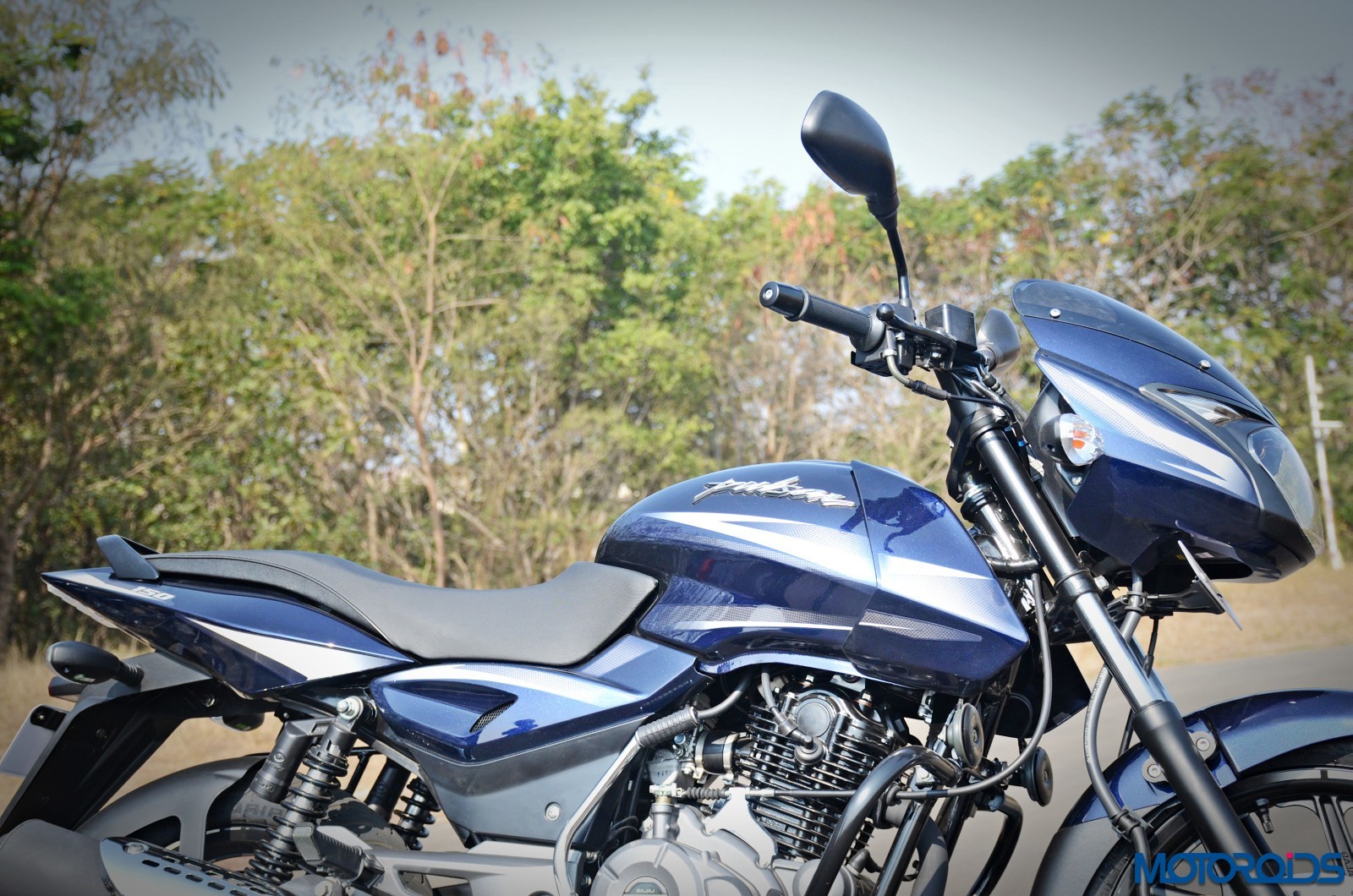 A big change for the entire 2017 carburetted Pulsar line-up is the introduction of a 5 Map CDI as against the previous 2 map unit. The more modern CDI has the capability to sense engine load deriving data from the Magneto. This gives the system a more fine grained control over the air-fuel mixture, allowing for better combustion, especially at lower revs, and resultantly better refinement and lower NVH levels.

Do those changes really work?

We wouldn’t have been too sure of that, but thankfully, the blokes at Bajaj Auto had provided us a 2016 version of the Pulsar 150 to compare with the new model. The difference in the way the two engines sound and feel is significant to say the least. 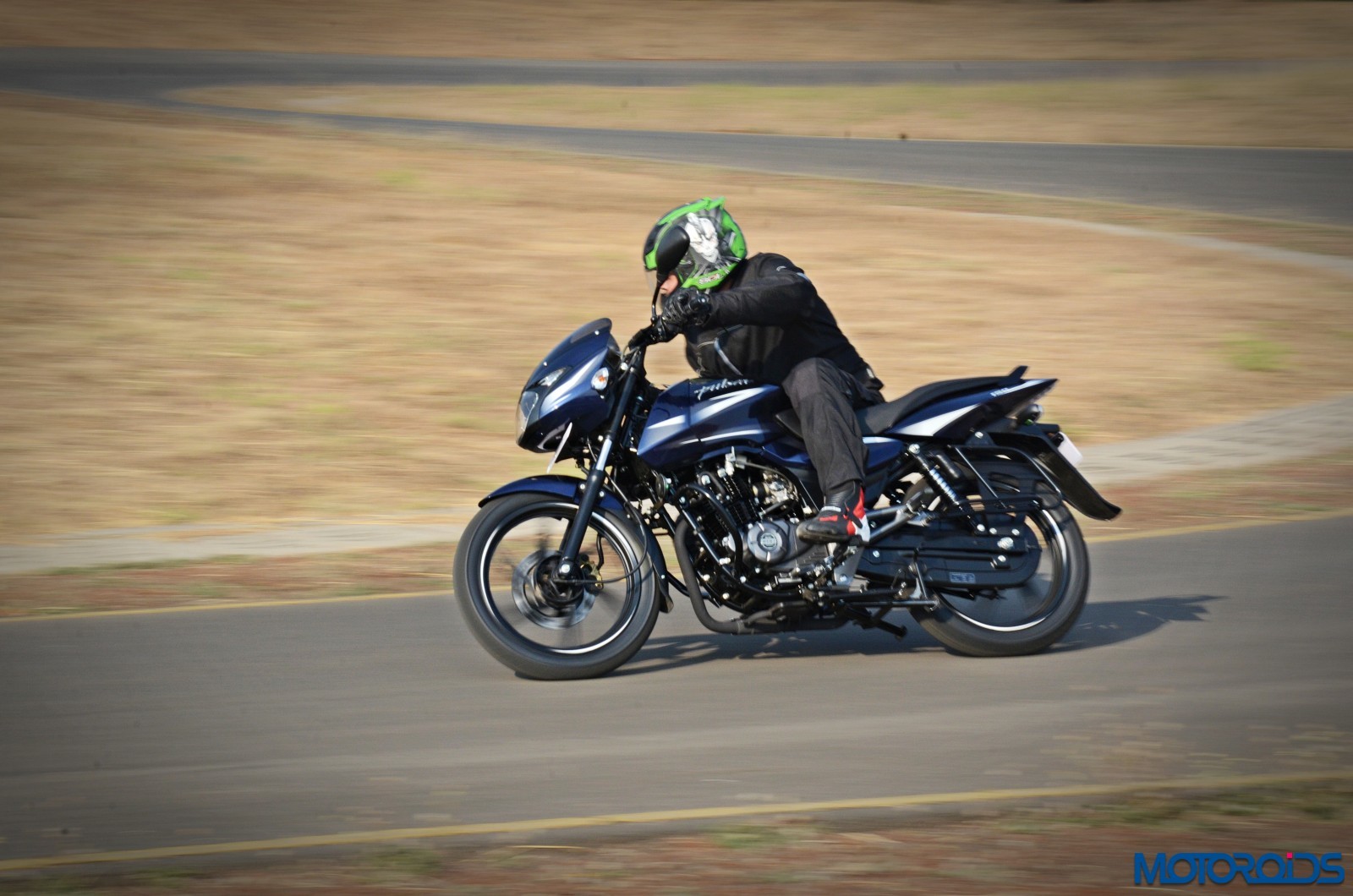 The 2016 engine makes undesirable rattling sounds at low to mid revs. There is this pronounced clatter that projects the perception of metal milling inside that engine. As explained by one of the Bajaj engineers, the 2016 engine doesn’t sound and feel fluid or cohesive enough, with a distinct awareness of different parts working separately. The target was to remove that experience and make the engine feel smoother and more tractable with a more unified feel.

The engineers have succeeded to a large extent. Riding the two bikes back to back, the 2017 i50 feels devoid of any rattling noises or unwarranted vibrations in the lower revs. The longer stroke has also worked as desired for driveability and there is a distinct lack of knocking or shudder at the lower revs. The new engine feels smooth, and the milling noises have been ironed out to a huge extent. There are some vibes to be experienced on the footpegs though as the revs climb and nudge the 6000 rpm mark. 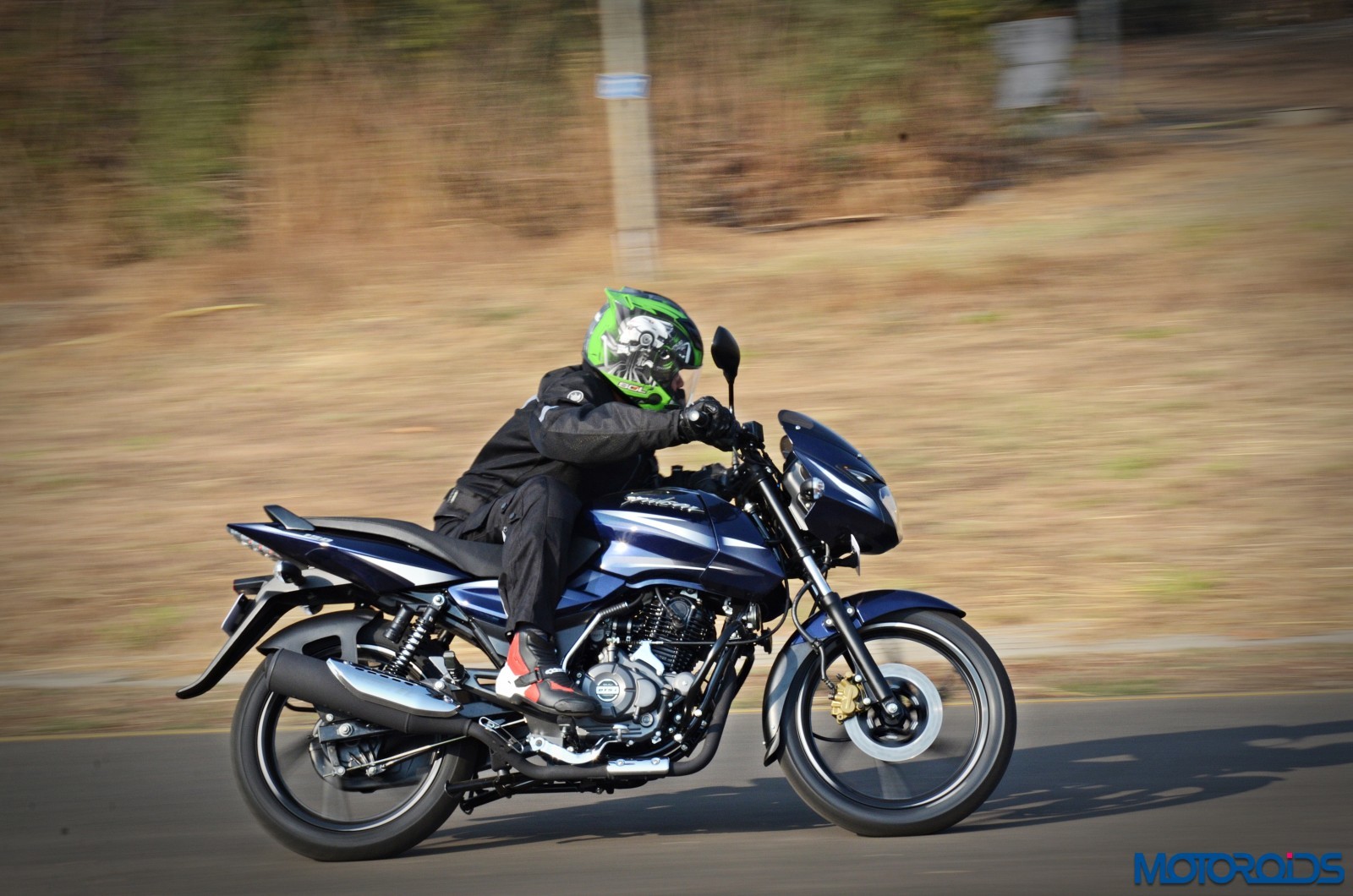 The new engine decidedly feels smoother and more fluid. So if that was the aim, Bajaj Auto most definitely has succeeded. Is it the smoothest or the most tractable engine in its segment? No. But the improvement over what it replaces is significant and should most definitely be appreciated by potential buyers.

What else should I know?

We have mentioned all the changes made to the bike, and we would be able to deliver a definitive verdict only once we ride the bike for an extended period outside the pristine confines of a test track. A track is meant to test handling, though, and during my few laps around the section allocated to us, I did try pushing the 150 around the tighter bends aggressively. On one of the occasions, while leaned over and trying to power out of the corner, I could feel the rear MRF Nylogrip Zapper rubber losing traction and tending to slip away. Sure, they’re no Metzellers, and the 150 isn’t the kind of motorcycle that should be pushed to the extreme either. However, since we were at the track, this was a small observation we made, and felt it would be worthwhile sharing with you. Swap that rubber for something stickier if you wish to go canyon carving with this one. 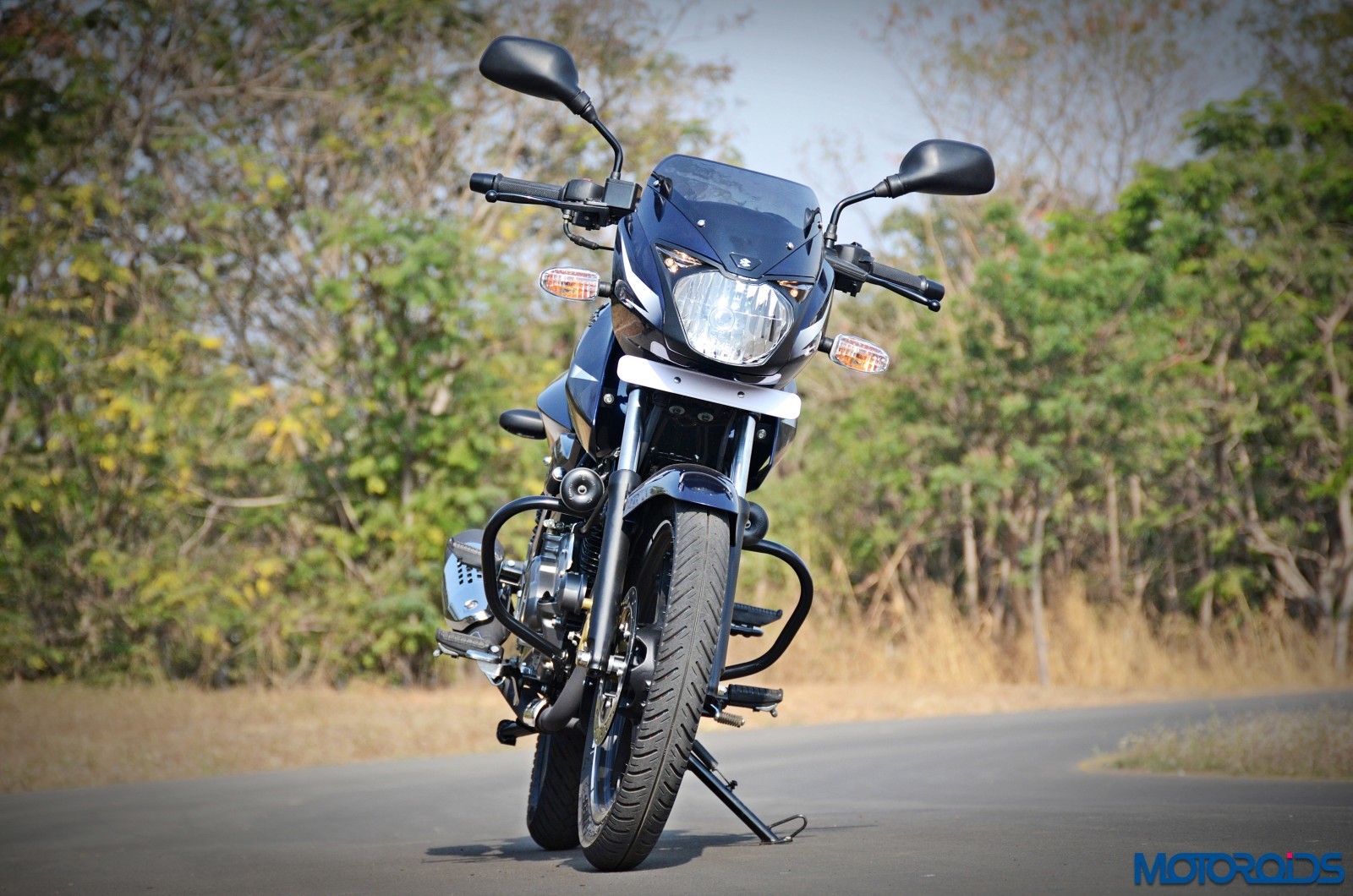 The 2017 Pulsar 150 DTS-i BS1V is priced at INR 74,604 ex-showroom and makes for a reasonable buy within its segment. It’s showing its age in a few departments though, and we expect Bajaj to come up with a more comprehensive model replacement soon.

Check out the image gallery of the new 2017 Pulsar 150 below – click on the thumbnails to browse slides.