The Audi A3 Cabriolet, in our books is among the most economical, sensible, practical two-door soft-tops in the country. We were blown by its suitability to our conditions when we first drove it, back in 2015. The 2017 Audi A3 cabriolet follows its sedan sibling in getting a trip to the beauty salon and what we have here is the refreshed version of the charming machine with more than just a nip and tuck. So what all is new? Let’s find out 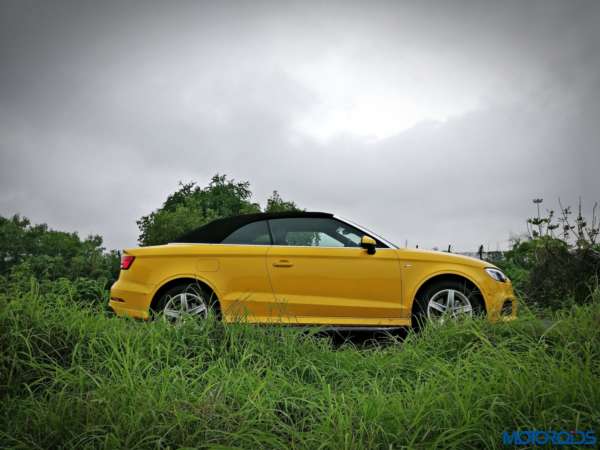 Facelift? Should I even be reading this?

By all means, you should; for this one’s not just an aesthetical upgrade. The car has undergone a heart surgery – it gets a new powerplant and has added quite a few goodies to its features list too. Oh, and even if we look at it purely in terms of the styling changes, there’s quite some stuff to talk about.

Audi has been replacing its 1.8 petrol engine with the smaller 1.4 TFSI unit in India for its entry-segment cars. The new A3 sedan saw the change first, followed by the new 2017 Q3 and now the A3 Cabriolet has also been given the new engine, which is less powerful and more frugal. The new 1.4-litre TFSI engine produces 150PS of peak power at 5100 rpm and 250Nm of peak torque between 1,500-3,500rpm. The power is down by 30PS as compared to the previous 1.8 petrol, although the torque output is same as before. Transmission is through the crisp 7 speed S-Tronic which hardly ever gives you a chance to complain. 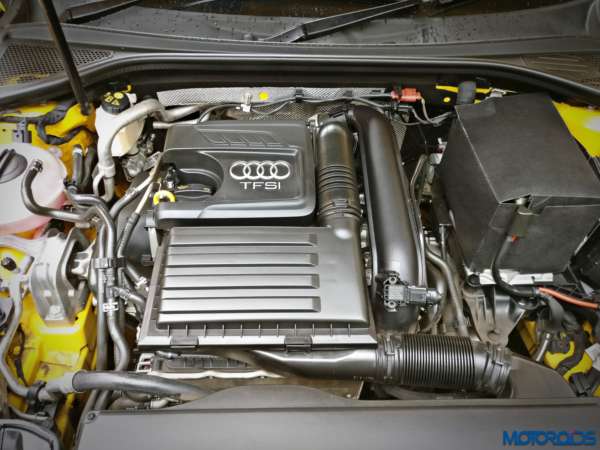 A special trick up the new engine’s sleeve is its COD or Cylinder on Demand tech which facilitates shutting down two cylinders when the car is coasting. This results in mentionable fuel savings if you drive with a light foot. Now, when we drove the previous version f the car, we noted that the real world fuel efficiency of the 1.8 TSI engine was pretty impressive. For the new engine, it’s still better, say, by 10 to 12 percent.  So, the new A3 Cabriolet will deliver an efficiency of about 11 km to the litre if you drive it moderately, which is pretty impressive for a car this class.

I get the efficiency bit, but does the smaller engine translate into the car feeling slow?

You cannot call it slow or underpowered with its appreciable mid range and reassuring in-gear acceleration. Thanks to all that torque, the new A3, even with the smaller engine feels sprightly and responds very positively to part throttle allowing quick overtakes. Outright acceleration, however, has taken a hit and is not as good as the previous version. The new A3 Cabriolet would sprint from a standstill to 100 km/h in about 9 seconds. Now that’s not too quick, but not too slow either. It’s a practical, engine which has enough meat to give the A3 Cabriolet a slight edge over the everyday machines. It’s refined, it’s got a nice mid-range, it’s frugal and practical; however, it isn’t for the enthusiast. 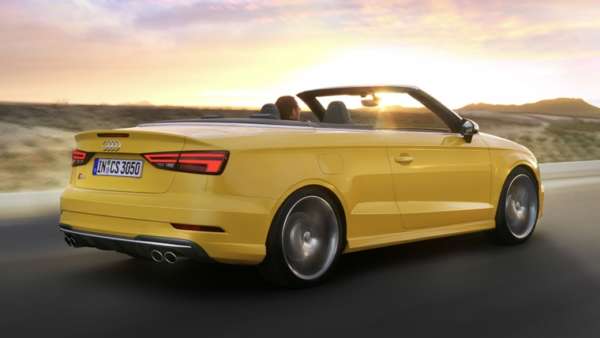 The 7 speed S-tronic swaps ratios as quickly and as efficiently as ever, making light work of various scenarios ranging from handling the crawling Mumbai traffic to the tempting windy stretch of roads a 100km away. You can always shove that beautiful shifter stick into Sport mode if you are looking for some extra shove.

Being a cabriolet, does it lend itself well to our hot and sometimes wet conditions sprinkled generously with those horrendous roads?

You’d be surprised how well it does. For the two days we had the car with us, it was pouring in Mumbai like there was no tomorrow. With the rain making smashing noises against the glass windows of my bedroom quite ferociously, I was somewhat worried about this rag top parked out in the open. It rained all evening and all night, and the next morning when I opened the car’s door, dreading that the passenger bay may have flooded with water, I was glad to know that not a drop had managed to find its way in. 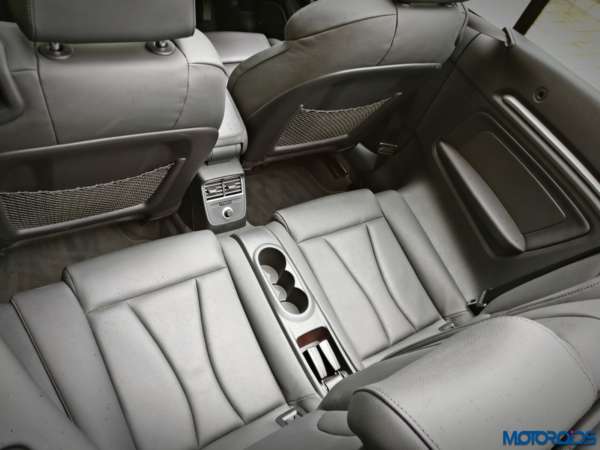 About the comfort part, the back seat is definitely not for adults. You can probably shove a pair of mortals you don’t particularly like in there, but they’d complain before it’s too long. Children, adolescents at best would find whine-free knee-room at the back in those bucket seats which are meant strictly to seat two.

The ride quality is surprisingly comfortable and supple though, making the A3 Cabriolet an uncannily absorbent machine for its class. The A3 Cabriolet is relatively softly spring and takes in its stride broken roads and rough surfaces rather well. It’s doesn’t bode too well for sharp handling, but we’ll come to that part in a bit. 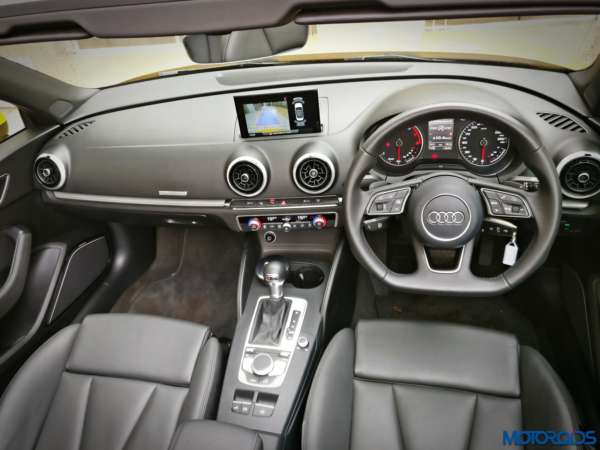 Air conditioning is managed through a two-zone unit which does its job well, and with the premium Bang & Olufsen sound system dishing out the music crisply, you do feel special inside the car. The seats are comfortable though the lack of electric adjustment is something totally not acceptable for this segment. It’s a grave omission and Audi should most definitely do something about it.

What other new features does the facelift boast of?

For one, we were pleasantly surprised to see the Audi Park Assist in the new A3 as it was previously not available. Using the system, the A3 Cabrio can parallel (or perpendicular) park itself when shown a suitable slot. 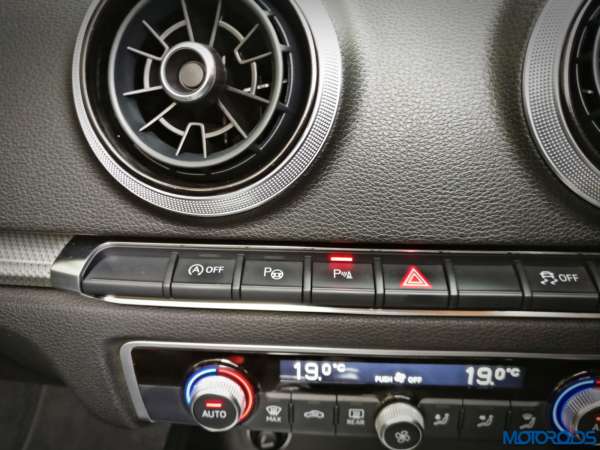 Peeping through the new-design three-spoke steering wheel was the standard instrument console with analogue speedo-tacho and a colour MID display in the middle for our test car. The new A3 Cabrio, however, can be optioned out with the Virtual Cockpit as well. The system has been brought to Audi’s compact class for the first time with the A3 Cabrio. The Audi virtual cockpit displays vital driving information in high resolution on a 12.3-inch TFT screen. The driver can choose between classic view which essentially is a digital projection of the analogue instruments or expanded view mode which shows navigation with a host of other information. 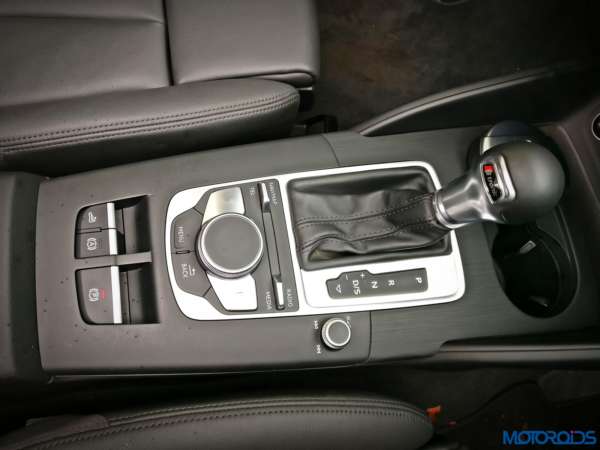 The MMI menu has been redesigned to make it more intuitive and smartphone-like, along with Apple CarPlay compatibility. The MMI rotary/push button control between the front two seats has a touch-sensitive touchpad for entering characters, multi-finger gestures and allows zoom-in function as well. The voice control for navigation, radio, media and phone has also been improved and made more intelligent. 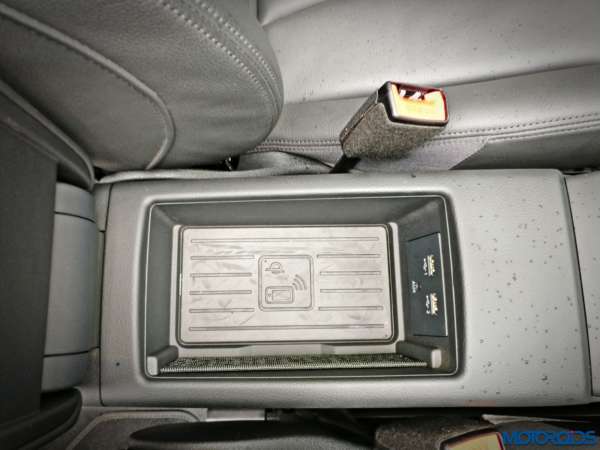 Like some other new Audi cars, the A3 Cabriolet also gets the Audi phone box in the central armrest and links smartphones wirelessly to the vehicle’s antenna. The phone box is also enabled for wireless, inductive charging. 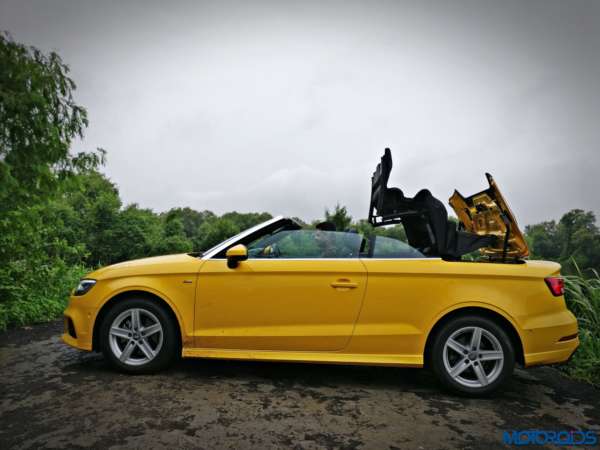 The 2017 Audi A3 Cabriolet gets LED headlamps as a new feature. The mechanized soft-top takes about 18 seconds to open or shut and can be used at speeds up to 50 km/h. Another notable thing is the 320 litre boot, which is pretty good for this sort of an application.

How well does it drive?

The Audi A3 is focused at practicality, comfort and economy. If you’re looking for something that slingshots to the horizon as you dab the pedal, and turns like it was on rails, then we’d suggest you look elsewhere. If you don’t mind getting your bones rattled in the pursuit of thrills, the Cooper S convertible could be one of your choices. 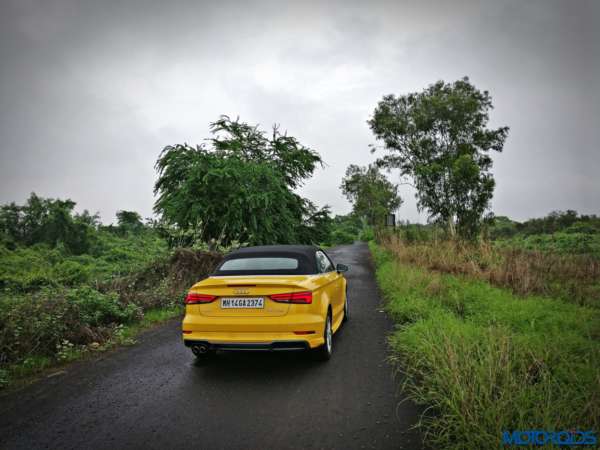 The Audi A3 drives well, it’s sure footed, but being a driver’s car is not its brief. That engine isn’t among the punchiest out there, the steering lacks life and there’s some amount of body roll to be experienced when you shove this one hard. But then, it’s uncannily comfortable for such a car and built so well that there’s hardly ever a squeak or squawk from the struts that support that roof even when driven over bad roads. It’s quiet and comfortable inside, and when the weather is right, it’s just about perfect to drive steadily with that gentle breeze making your mane flutter.

Alright, let’s get done with the styling bit as well

Sure. The front is now sportier with the radiator grille and bumper having been comprehensively restyled. The single frame grille gets bigger and is now edgier than before. The seven horizontal single slats within have been replaced with six units of paired plastic. The bumper features bigger, angular and more aggressive looking air intakes on the sides with the area under the grille forming a twin layered angular smiley slit. Then you have a new design for the headlamps, which are now flatter and with a newfound angular extension at the bottom. 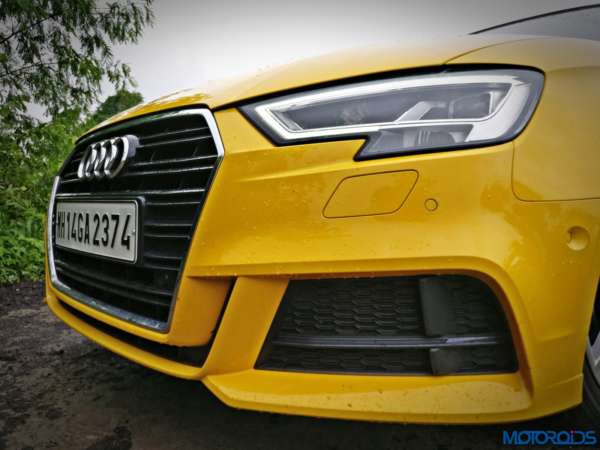 The sides remain the same, although the tail-lights get slightly restyled too. Changes can be seen under the bumper where the redesigned diffuser has taken a new shape. New colours have also been added to the palette. 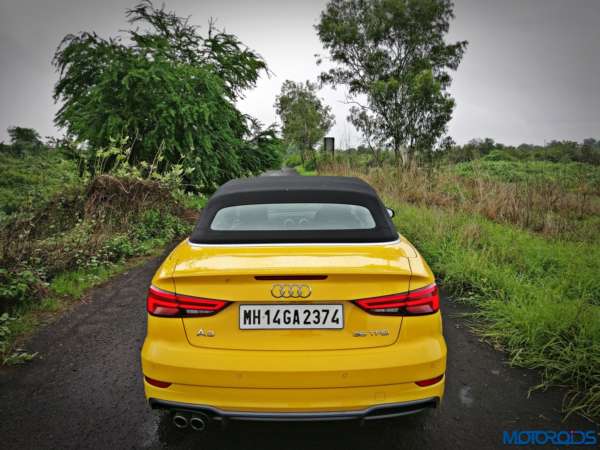 The new A3 remains unmistakable as the proportions and the theme remains unaltered. What has, however, been added to the package visually and most notably is a bit more aggression and flamboyance to the front.

We believe that the A3 Cabriolet is the most economical, practical and usable car of its kind in its category. Sure, you have other options like the Cooper S or the C-class Cabrio. The former is priced well, but isn’t even close to the practicality the A3 offers. The C-Class Cabrio on the other hand offers more comfort and practicality, but comes at a significantly higher price too. 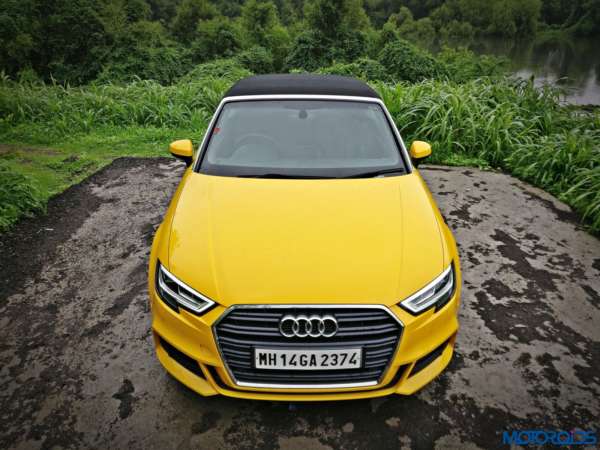 At INR 49 lakh ex-showroom the Audi A3 is about the most affordable, most usable convertible for our conditions. Hard as we might want to think, we cannot think of an alternative to this one. Go ahead take a test drive, if you’re driven by the indulgences of the topless variety.