The Audi A3 was launched in India in 2014 amid much fanfare. The car came to the Indian shores after conquering the world by having received the 2014 World Car of the Year Award. The entry model into the Audi brand was much loved owing to its balanced design, fresh new interiors which were minimalistic yet comfortable and practical and a pair of capable engines which were pretty frugal too.

The A3 is a sorted product and has done reasonably well in India. However, it had reached halfway in its product life cycle and needed to receive a refresh to keep its appeal intact. Audi has done the needful, giving the car not just some nip and tuck, but also introducing a brand new petrol engine, replacing the previous 1.8 TFSI unit. We drove the premium compact sedan on the gorgeous shoreline of Vizag, and here’s our first drive review, answering all the questions one may have about the refreshed model

What has changed on the outside?

Quite a few things, actually – to start off, the new single frame grille on the car’s fascia has been totally restyled and is now more chiselled and edgier than before. 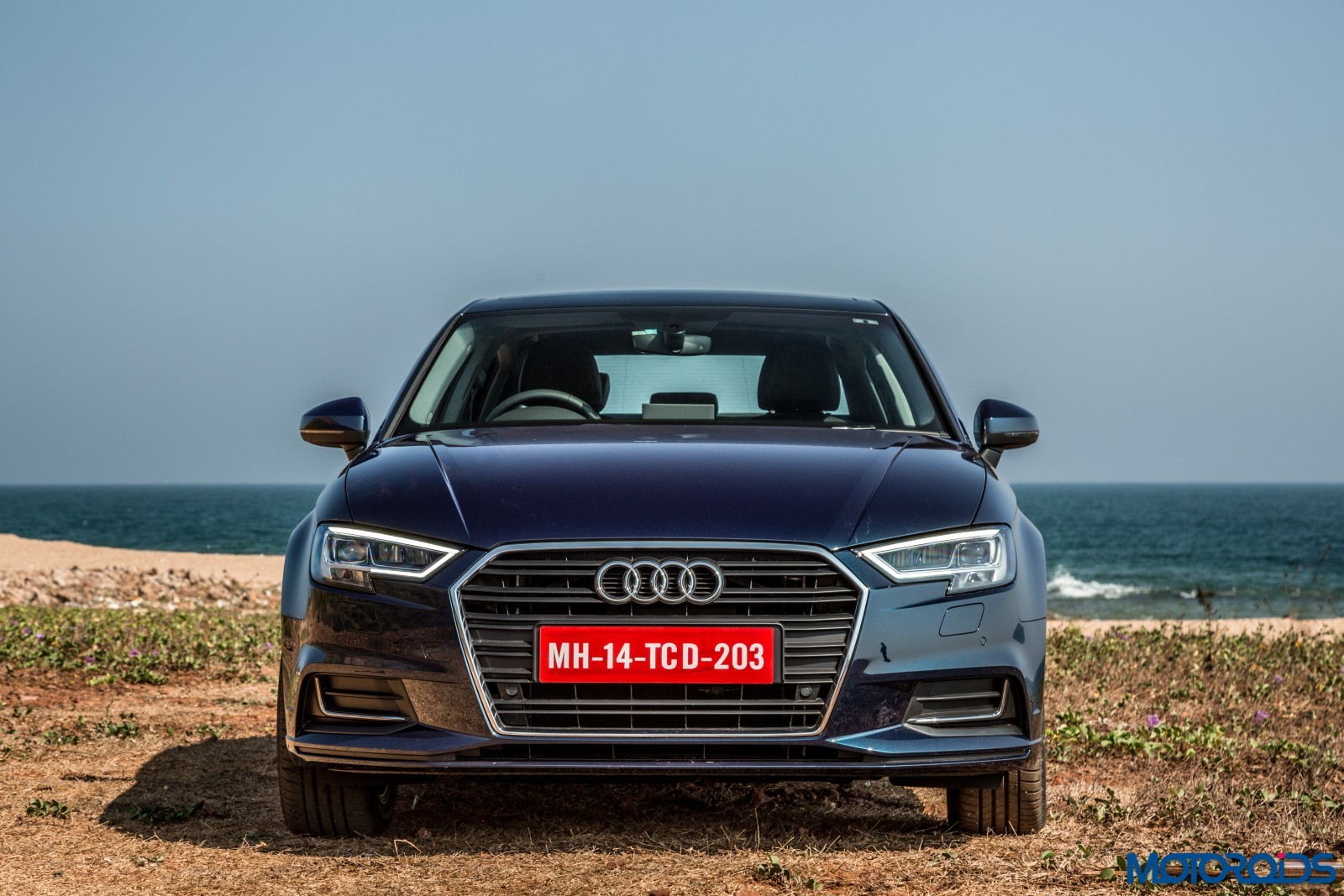 The 7 single horizontal slats within the grille have been replaced with 6 pairs of black strips. Flanking the grille, the headlamps have also been given a major overhaul. They have not just been restyled, but now also feature LED tech for the primary illumination units as well as for DRLs.

The headlamps on the previous version were softer at the edges – the new styling is sharper, with the DRL’s extending themselves halfway into the width on the lower portion. An important thing to note here is that while Audi has introduced LED tech for the headlamps, there would be lower priced variants available sans the feature.  Also, as goes with almost every mid-life refresh, the bumpers have been restyled to look sportier. 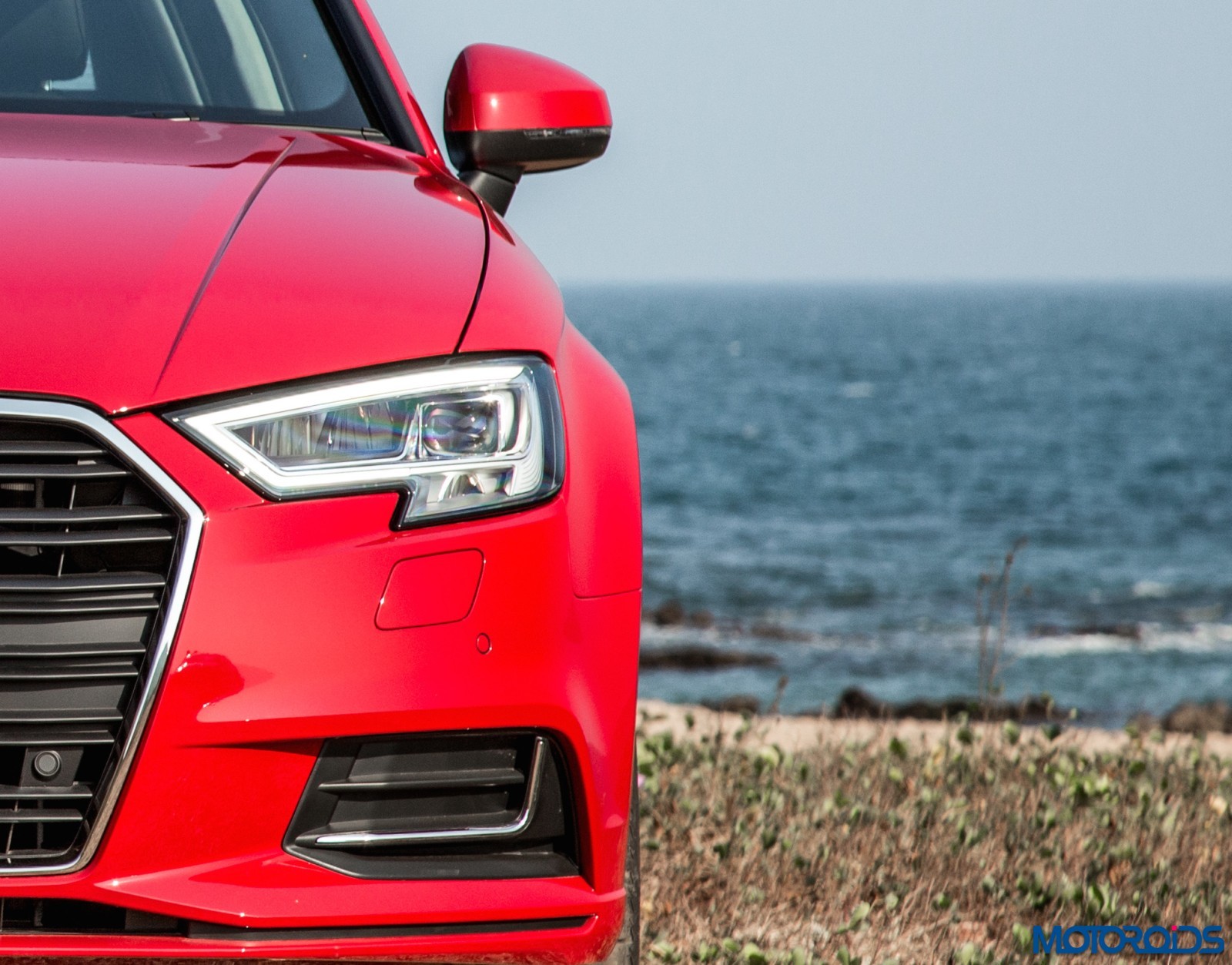 On the sides, the 16 inch wheels get a new 5 spoke design which looks smart and understated if not too sporty. In all honesty, we liked the previous design on the top spec variants better. 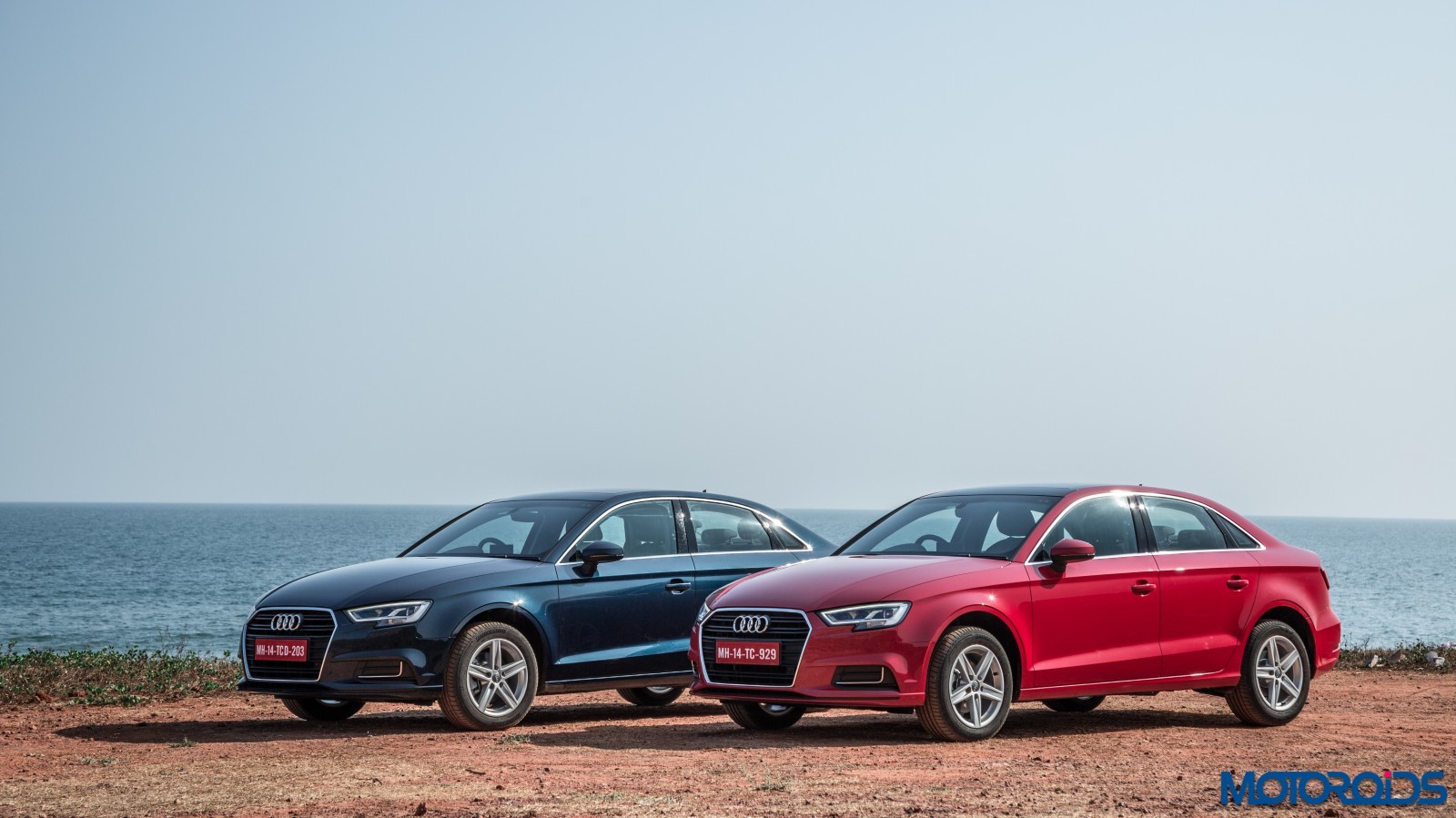 At the rear, the tail-lamps have been given an overhaul too. They were LED powered before and so are they now, although the styling, as is the case with the headlamps is very different. Another big change with the lighting at the rear is that it gets dynamic LED blinkers, which was not the case with the previous version. 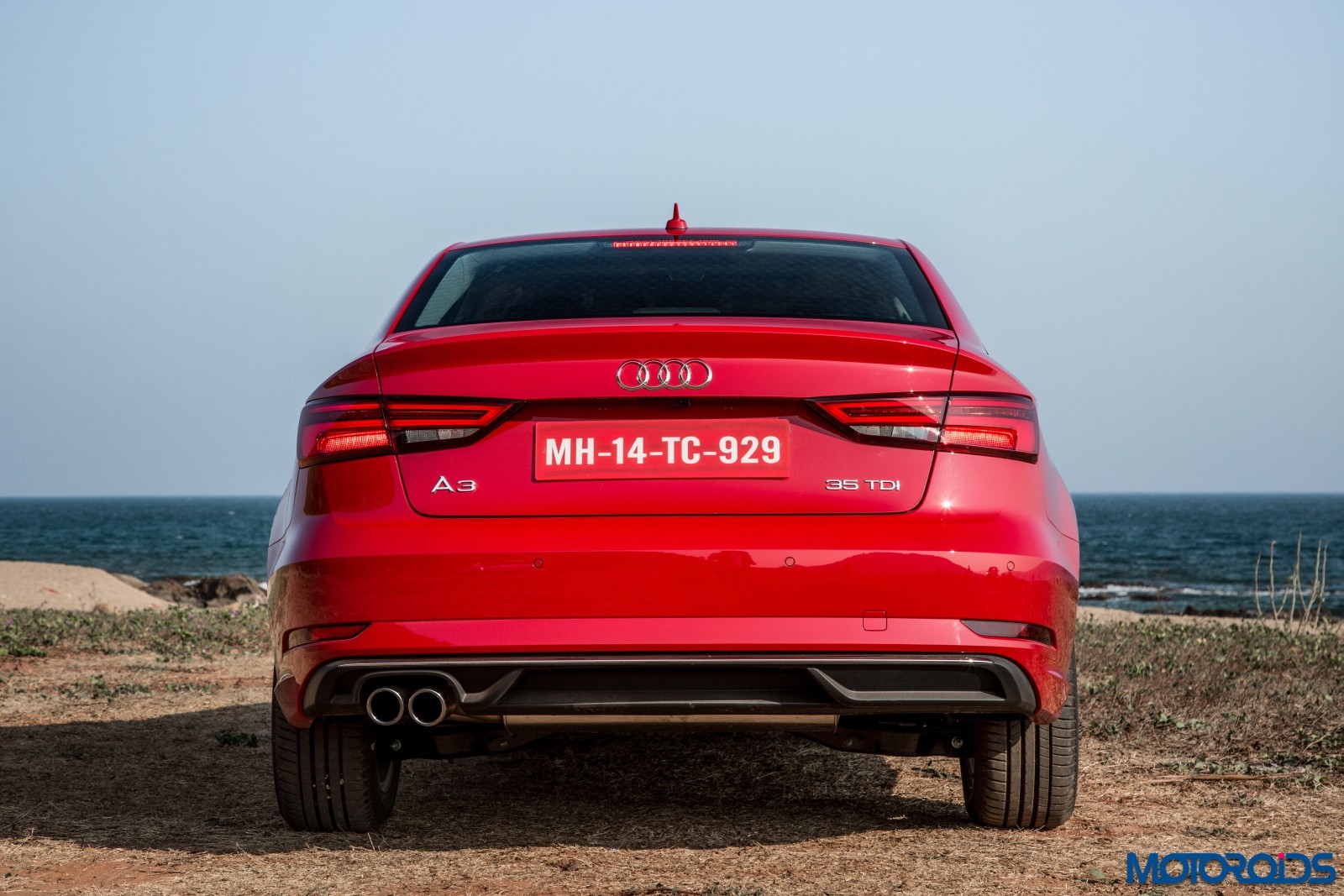 Bumpers have been restyled at the rear as well, and now comprise a faux diffuser for styling. The exhaust pipes remain unchanged though.

Another change on the exterior is the inclusion of the sunroof as standard equipment, while it was available only as an option on the previous model.

And what’s the story inside?

The car gets a new three spoke steering wheel which replaces the previous 4 spoke unit. The bottom spoke on the wheel gets piano black inserts, which it shares with the A/C dials too. The aluminium finish on the A/C dials gets replaced by chrome, and the surface is now textured for better grip. There’s also an Audi logo on the passenger side dashboard which wasn’t there previously. 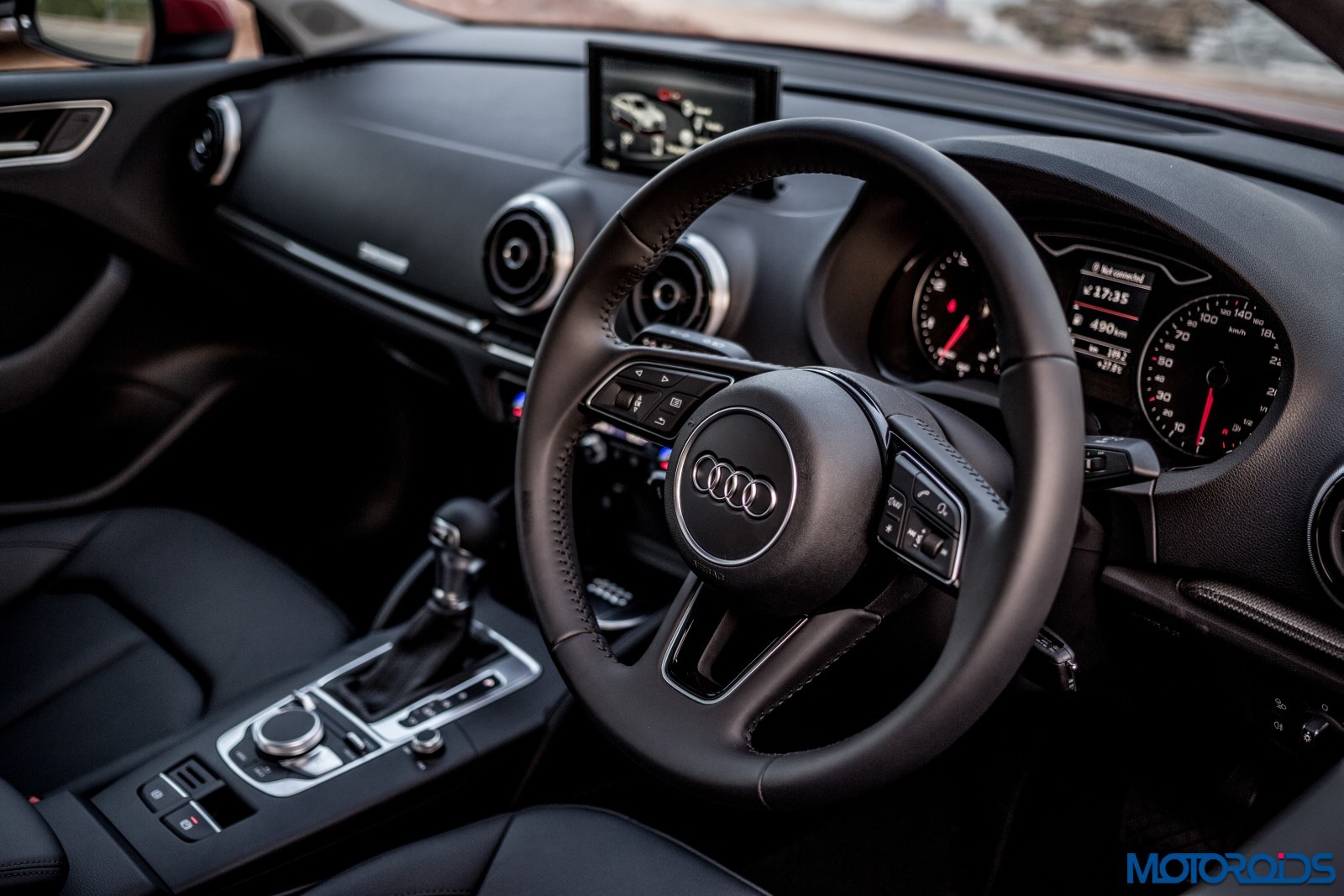 The 7 inch retractable MMI screen is a slightly advanced version of the previous unit. It gets more features on the navigation front where points of interest like fuel stations or restaurants can be vocally spelled out with generic voice commands. 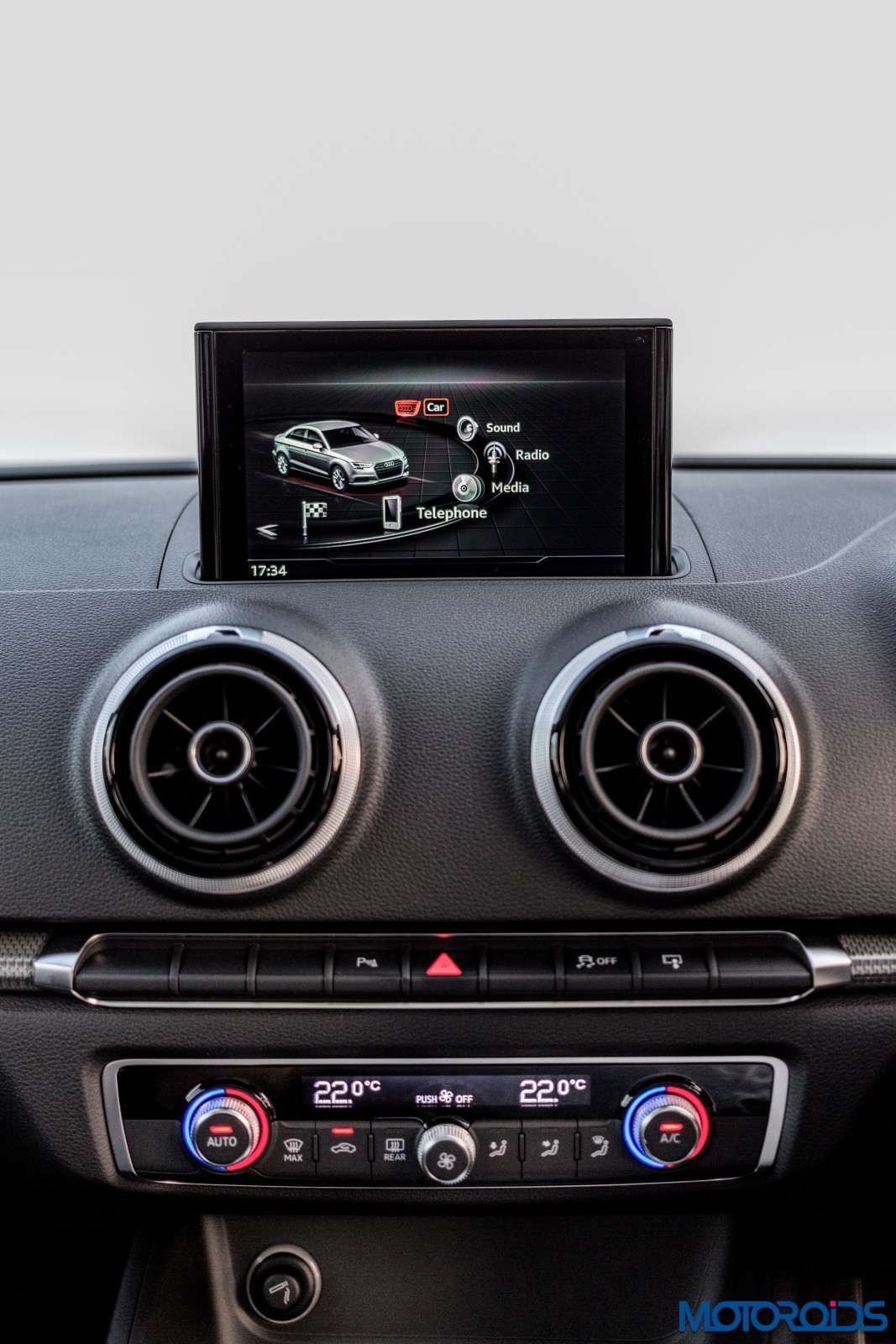 Another change here is that the 5.8 inch screen available on the lower spec variants has been shown the bin, and the car is available only with a 7 inch version. The bin under the front central armrest now gets wireless charging and Audi claims that the connection with the car’s antenna also boosts signal strength. 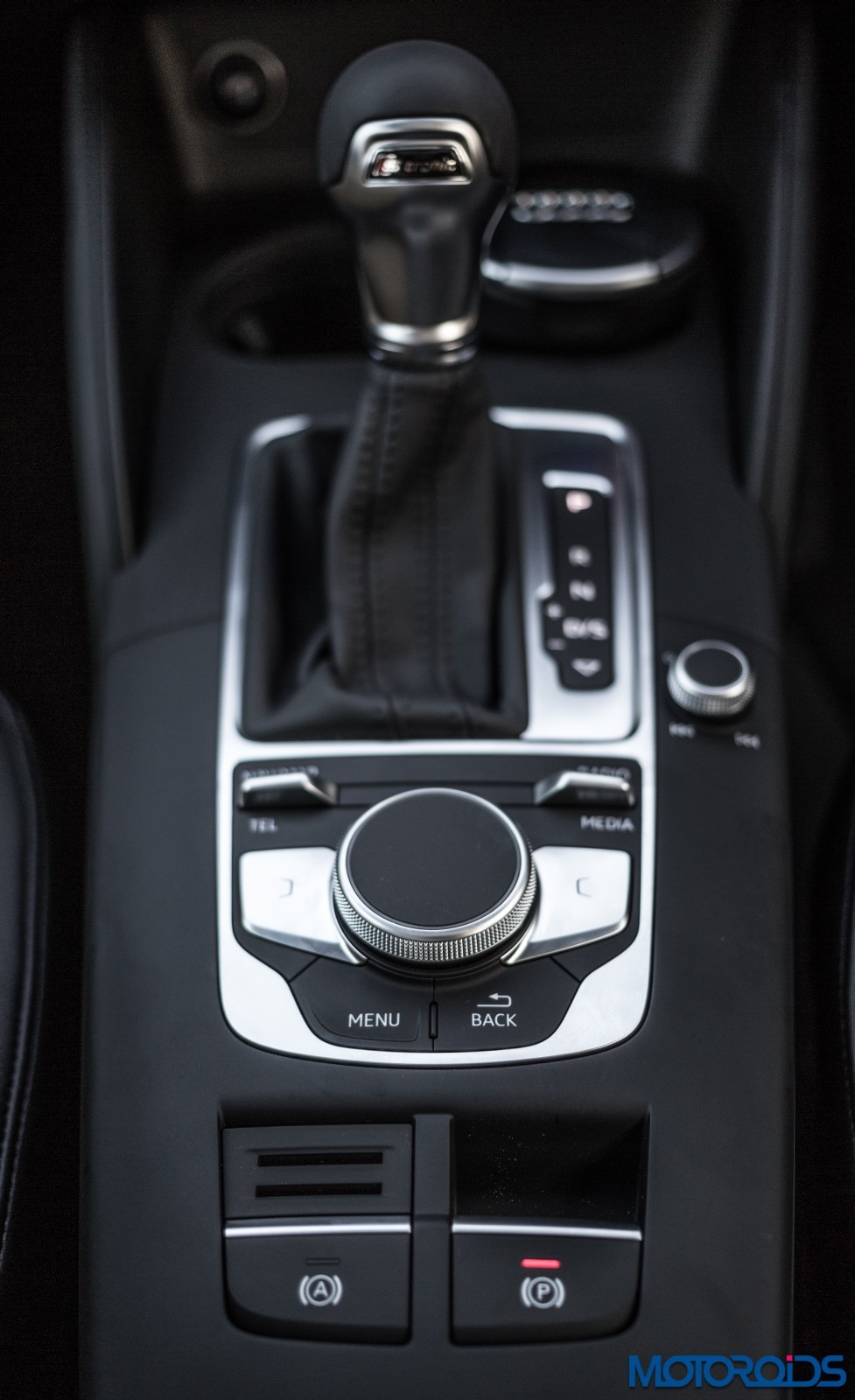 Finally, the MMI controls on the floating panel between the front seats have been reduced to two from an earlier four for ease of operation and more intuitiveness.

You talked about a new engine, tell me about it. 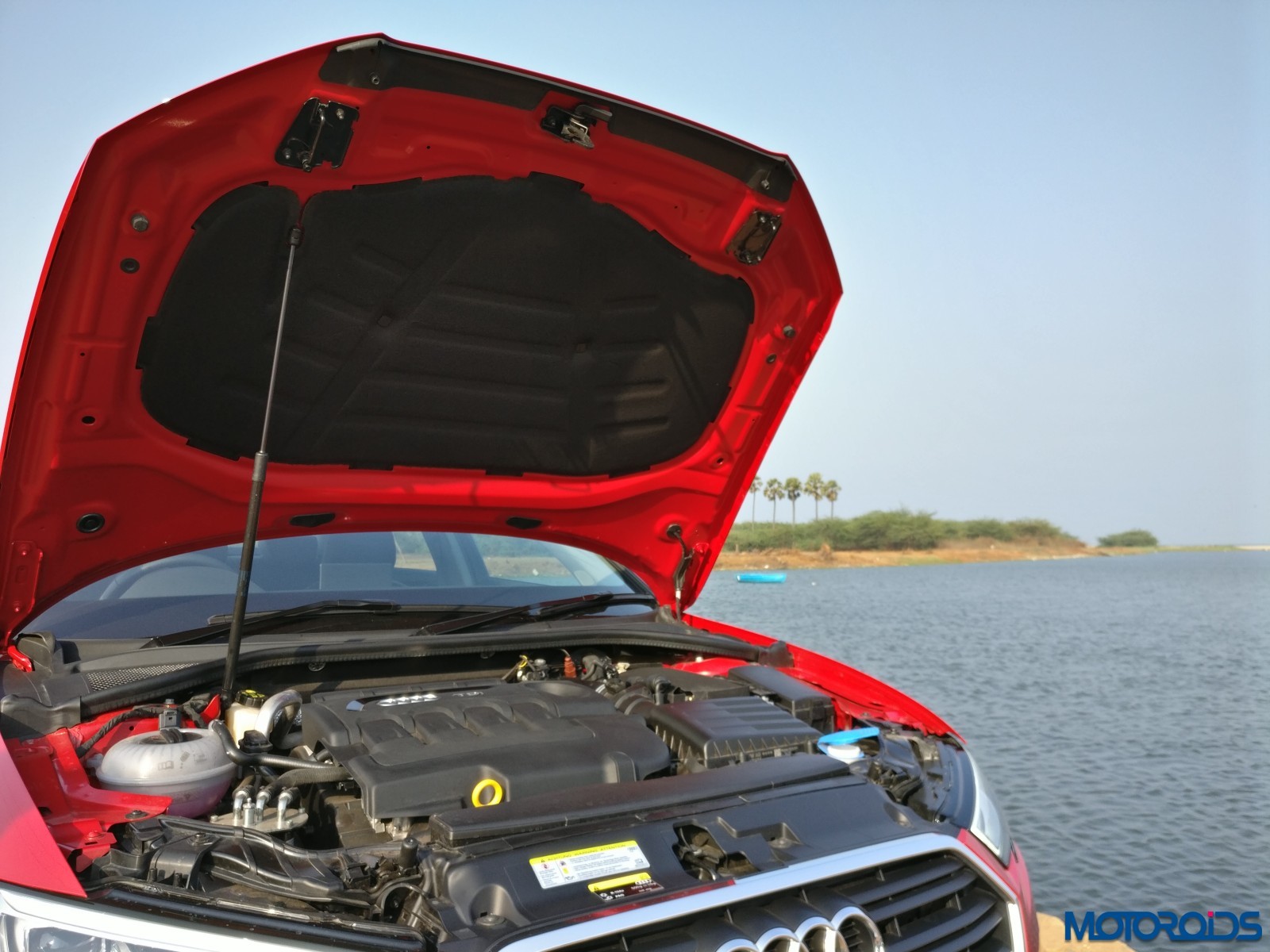 The piece de resistance of the new engine is its cylinder on demand tech, which helps it achieve great fuel efficiency figures when driven with a light foot. 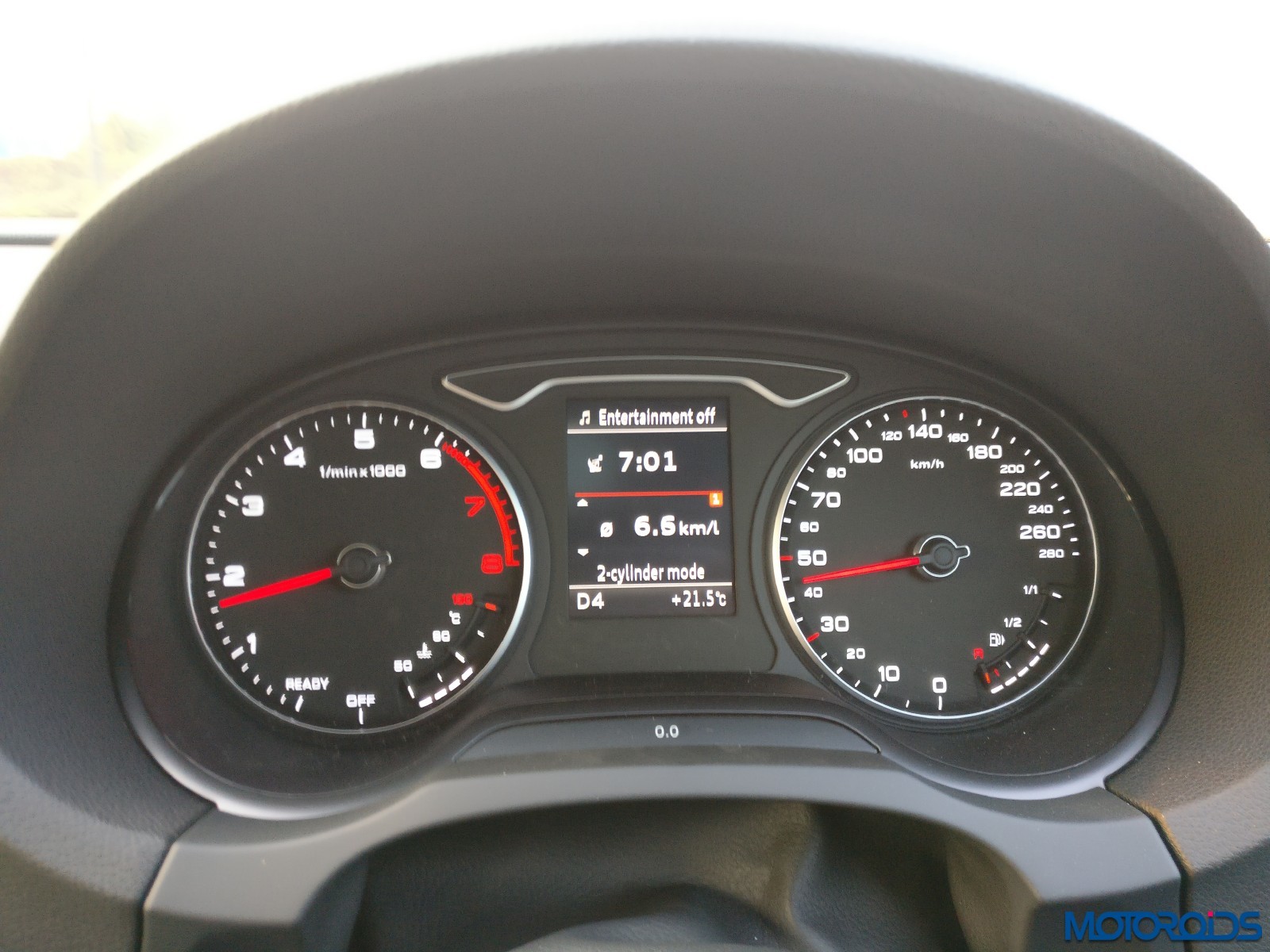 While coasting, the engine shuts down its two cylinders to enhance the fuel efficiency drastically. The act is duly represented in the instrument console, with a ‘2-cylinder mode’ notification. 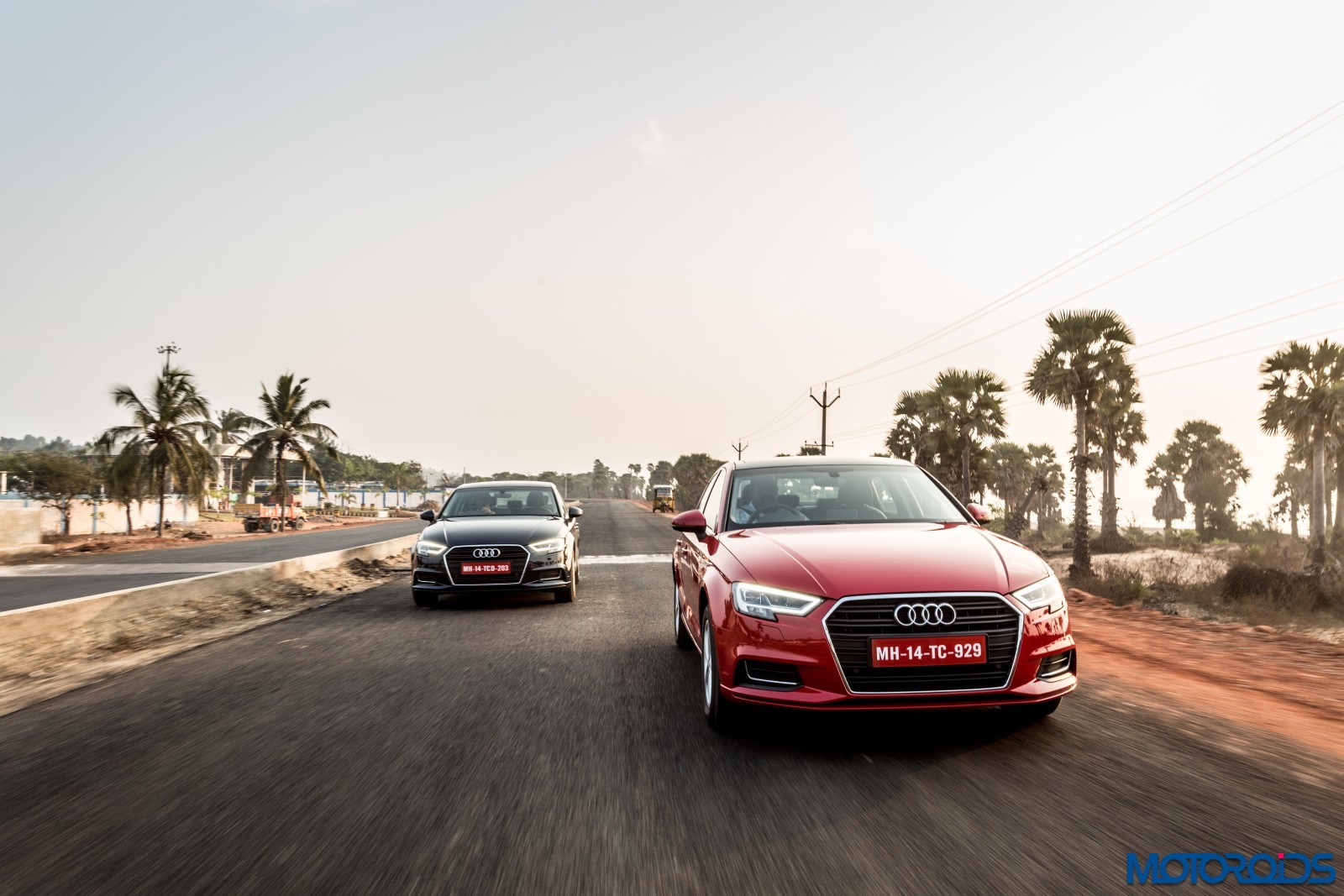 The 2.0 litre diesel powerplant with 143hp of power and 320 Nm of torque remains totally unchanged though.  It does its 0-100 km/h sprint in 8.7 seconds and can make the A3 reach a top speed of 224 km/h. This engine is paired to a 6 speed S-tronic transmission, unlike the 7 speeder unit on the petrol powered version. The fuel efficiency of the oil burner is rated at an impressive 20.38 kmpl by ARAI.

How does the new engine perform?

In terms of performance, the new engine takes 0.8 seconds more than the motor it replaces to get the A3 to the 100km/h mark from a standstill with a time of 8.2 seconds. Fuel efficiency, however, is super impressive for this sort of an engine, and is rated at an astonishing 19.2 kmpl by ARAI, up 16% percent over the previous engine.

As mentioned before, while the cubic capacity and power has reduced the torque figures haven’t changed, which means the new 1.4 TFSI unit feels almost as exciting to drive as its bigger sibling. This reflects in the acceleration timing as well, which hasn’t changed by even a second. 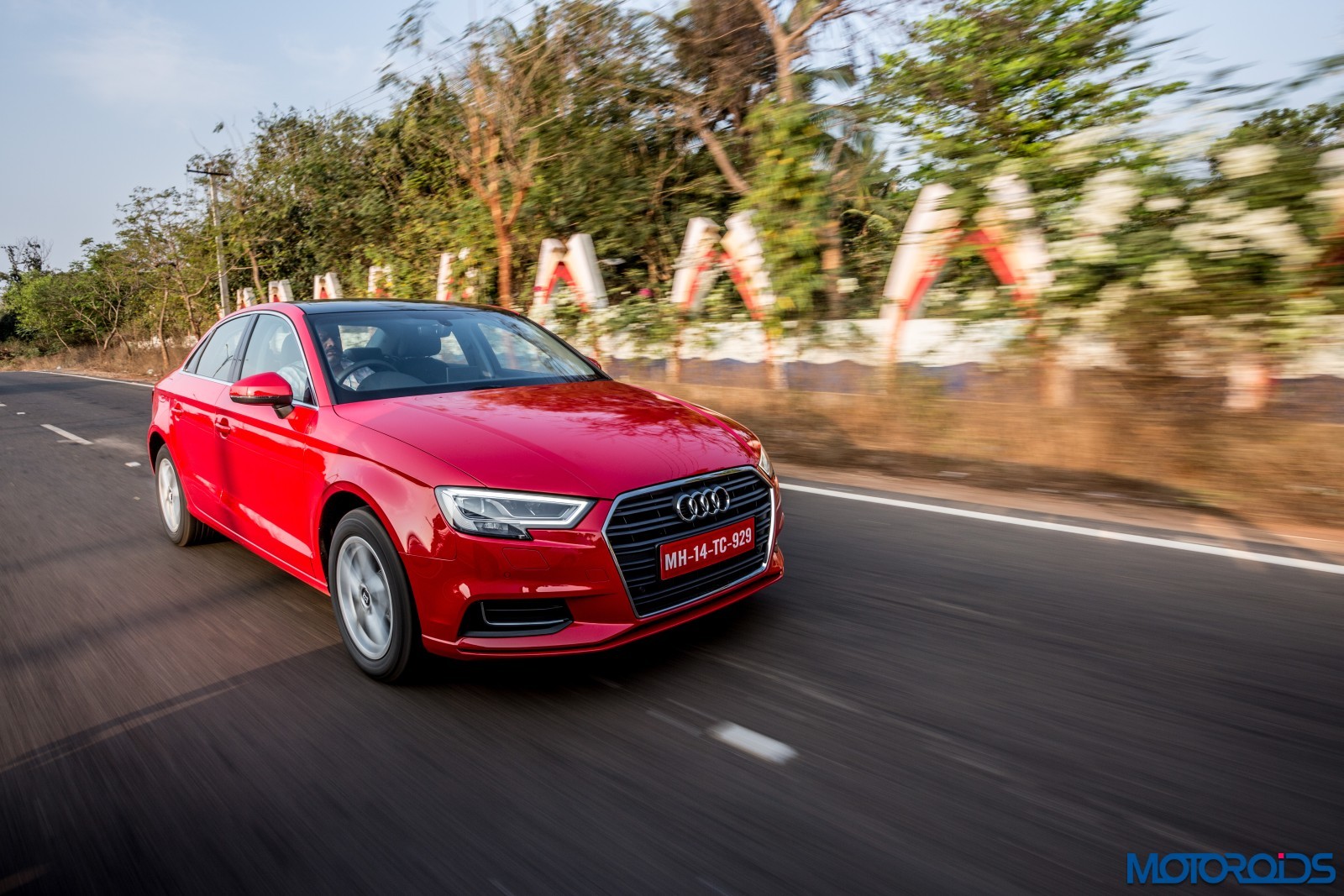 As a standalone unit, the new engine feels responsive from the very bottom of the rev range. Part throttle and even gentler dabs on the right pedal are responded to instantly. The turbocharged motor comes into its own after 3000 clicks though where you feel the pronounced turbo kick, and the engine’s hitherto muffled tone begins its sporty transformation. It builds speed quickly and revs all the way to its 6000 rpm redline with a whooshing note that sounds properly sporty.

It’s a very practical engine which is responsive and efficient if you wish to drive it in a docile manner, but has the ability to excite when you push it harder. The new 1.4 TFSI engine might not be an out and out entertainer, but it’s a capable unit and straddles the practicality and performance departments rather well. 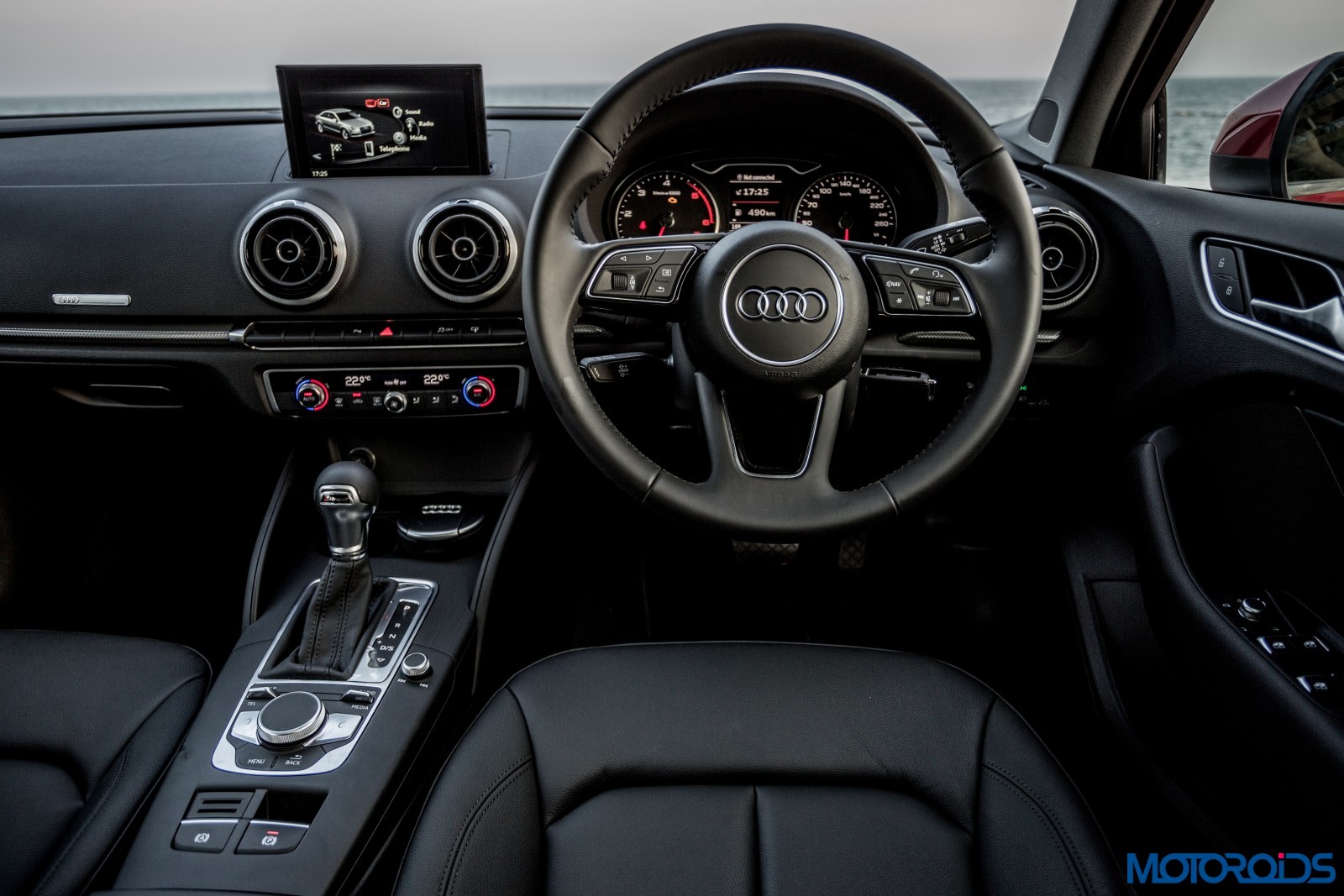 The 7 speed S-Tronic transmission is as quick and smooth as ever, and is a benchmark for the segment.

The diesel engine remains the same as before. It’s not the most powerful diesel units out there, and Audi does have a more powerful variant of this motor doing duty on other models. It is very tractable, reasonably powerful and very efficient though. It feels nice and smooth with minimal turbo lag and doesn’t leave space for any complaints with its respectable performance and impressive fuel economy.

The Audi A3 was highly acclaimed when it arrived for its astonishing blend of great ride quality and reassuring dynamic ability despite being a front wheel driven car. Audi knows to not mend what’s not broke and thus they have not changed a thing about the suspension or the underpinnings. The A3 rides beautifully, soaking speed bumps and undulations with utmost ease while also offering dynamic ability that holds its own when pushed hard around bends.

The steering feels a tad too lifeless for our liking and could have done with a wee bit more directness and feel, though it doesn’t lack precision. We found some deserted roads around Vizag, pushed the A3 rather relentlessly around bends and loved it for its composure and lack of nervousness when goaded hard.

For its segment, the road manners of the A3 are absolutely impeccable and cannot be faulted.

The A3 is the definitive entry level sedan in the premium segment. It didn’t win that World Car of the Year Award without reason. It’s an impeccably well built machine which does everything right, and offers a well-built, well-equipped, well-styled product to its target audience. The 2017 refresh makes its visually more appealing while also enriching it functionally. We love the A3 for the product it is, and the facelift has only added to the allure. On the downside, the headroom at the backseat could have been better, but that’s a problem only for the six footers amongst us.

Alternatives include the CLA, which is arguably more visually appealing. However, from a drivetrain, practicality and value perspective, the A3 still had an edge.

The prices for the car are yet to be announced and we will get back to you with our final verdict on the car once that happens.

Check out the detailed tech specs of the Audi 35 TDI and TFSI in the images below, followed by a jumbo sized image gallery. Click on the thumbnail images to expand 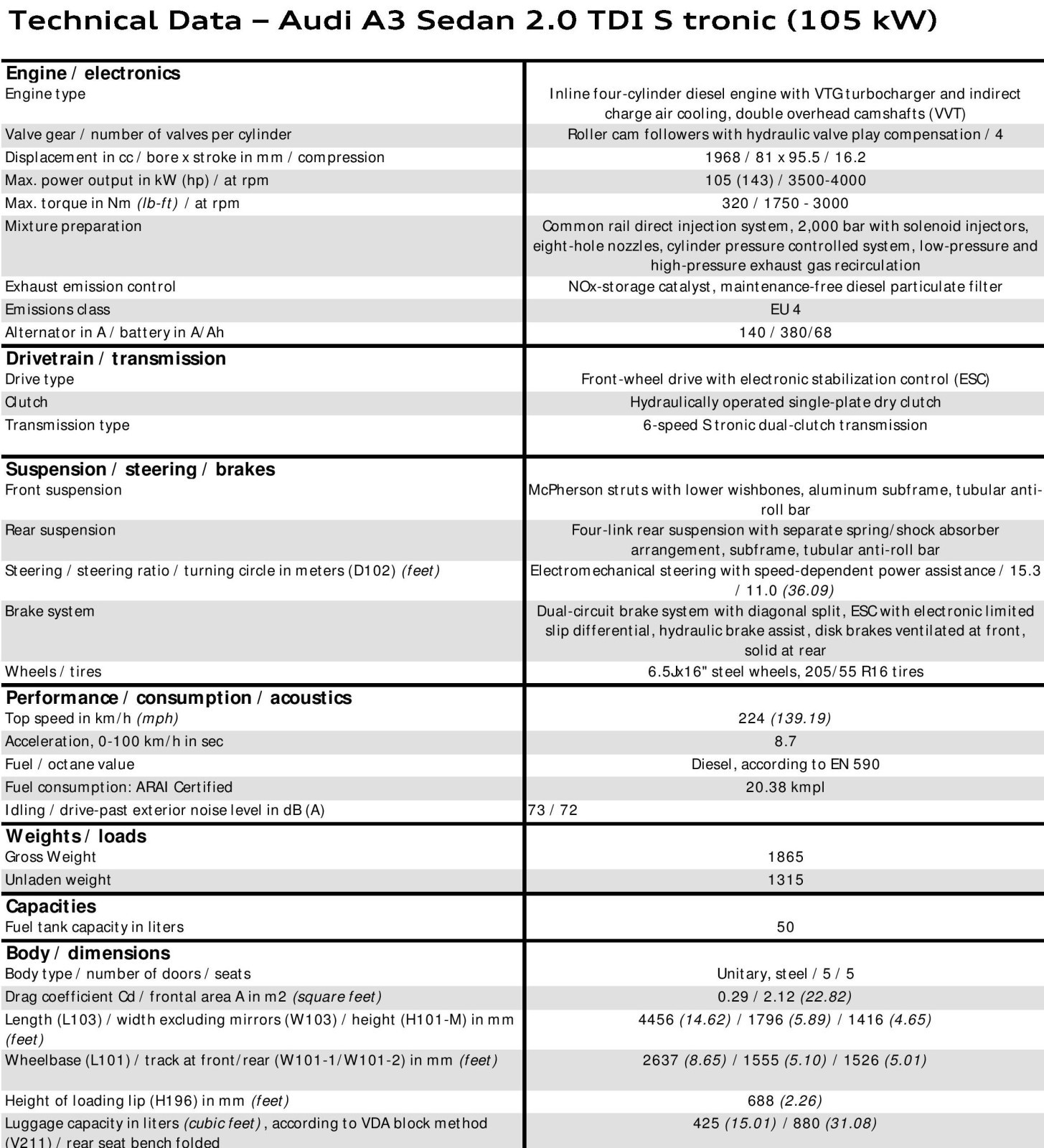 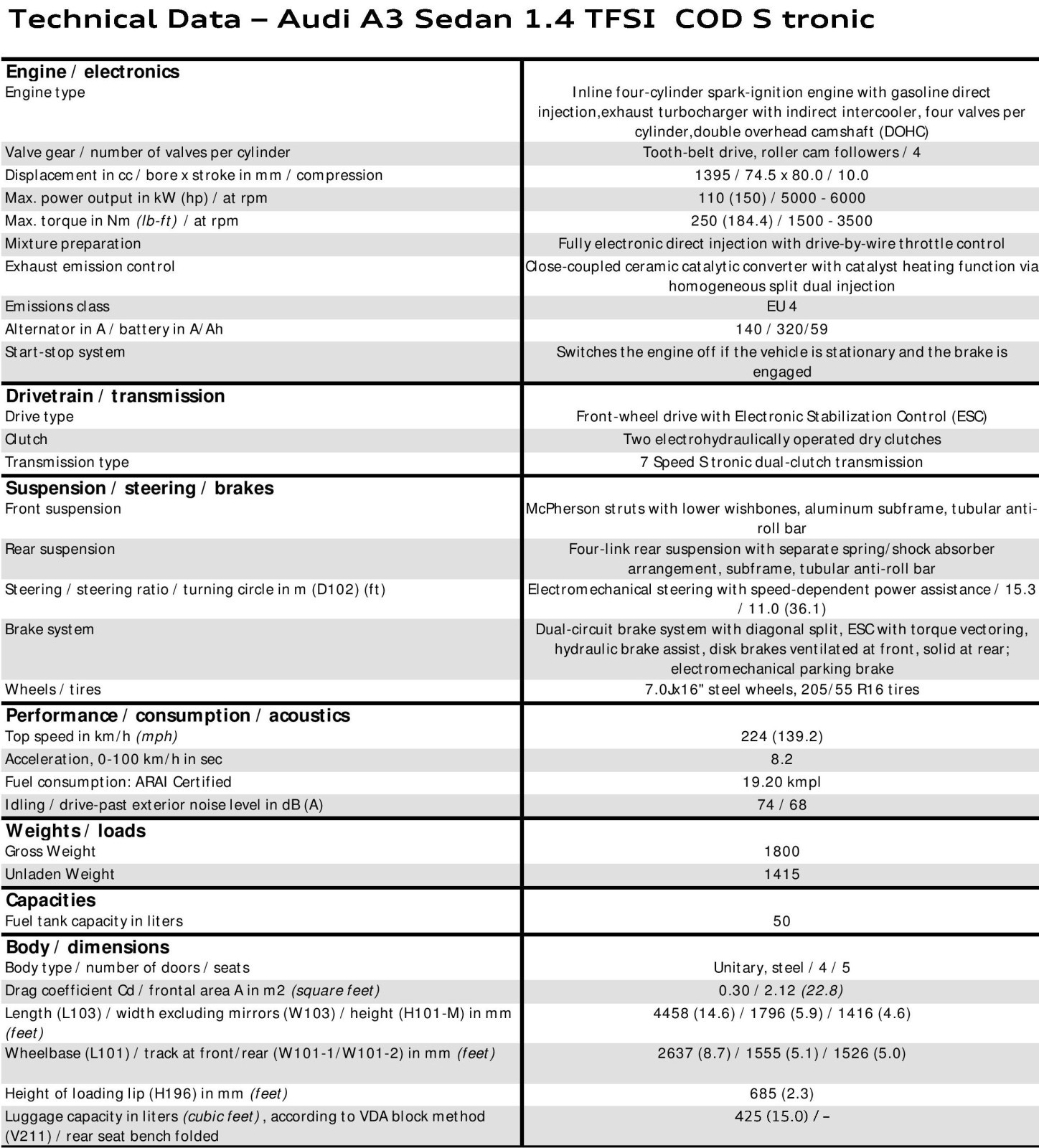