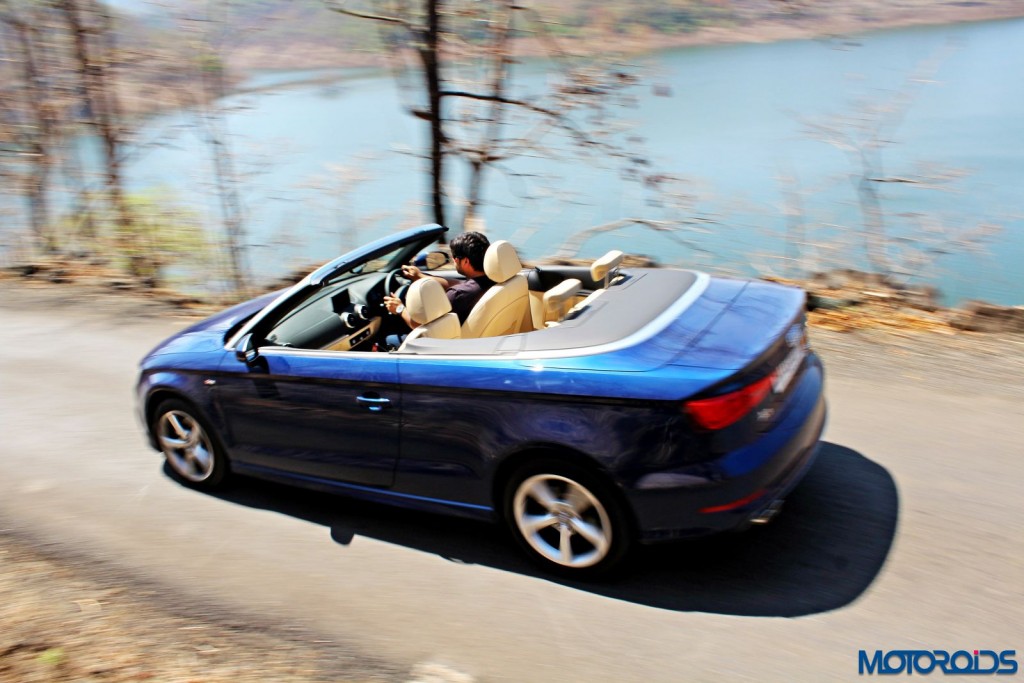 India woke up to the idea of top-down, romantic drives into the sunset with the one’s hair fairly late – blame it largely on the scorching climate and the lack of a niche. In 1998, something called a San Storm brewed, but quickly fizzled out. People never saw it again. The Storm, unworthy of being a drop-top or not, was India’s first home grown convertible, and the only one till date.

The climate might have changed for the worse since ’98, but preceding a generous economic growth, exotic and luxury car makers started relinquishing their open topped gantries on Indian roads. At the top, the crazies get to drive the Lamborghini Aventador Roadster, worth over INR 7 Crores of carbon fiber and V12, while, down the grapevine, the ladies get to hustle the Mini Cooper Convertible, retailing for a shade over INR 36 lakh. At 44.75 lakh (ex-showroom Delhi), the Audi A3 Cabriolet, ironically, is one of the least expensive convertibles to be sold in India. Open top motoring is a wealthy game. 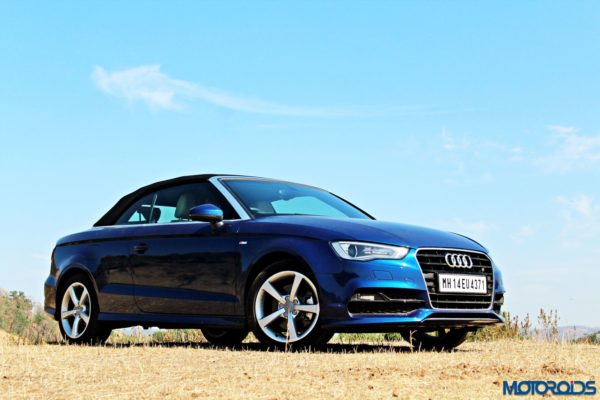 The A3 Cabriolet, launched in India on 11 December 2014 is a topless spin-off on the trusty A3 brand. It is based on the Volkswagen Group’s modular MQB platform architecture, with power coming from a range of updated, yet familiar VW Group engines. In India though, only one petrol engine is on offer, which is turbocharged, and is mated to a dual clutch automatic transmission.

At 4421mm long, this A3 soft-top is slightly shorter (by 35mm) than the A3 Sedan, but both sit equally wide (at 1796mm). However, with a two door profile along with a lesser height, the new A3 cabriolet somehow manages to look more squat and  purposeful-looking than the sedan, and has what Audi describes as a ‘coupé-like stance’. 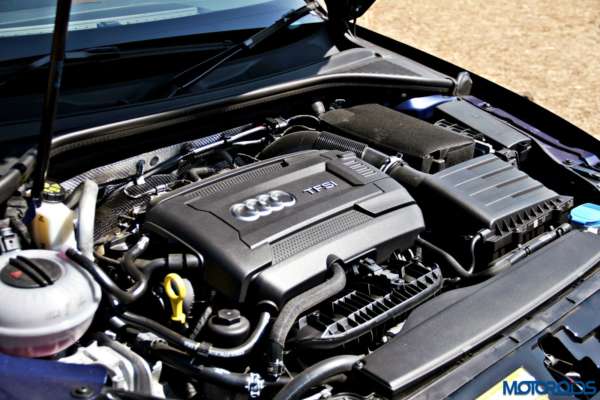 In India, the Audi A3 Cabriolet only comes in 40TFSI guise, which translates into a 4 cylinder, 1798cc, turbocharged petrol engine, good enough for 180 bhp of maximum power, and 250Nm of twist. Mated to the tried and tested, butter smooth 7-speed automatic dual clutch box, 0 to 100kph comes up in a claimed 7.8 seconds. But we’re not here to smoke its tires off – the A3 Cabriolet is more of a car that you’d take out to the hills and drive fast – yet in control, or head out for a spirited, late night, urban spin, with neon glinting off its lustrous paintwork. It’s meant to be piloted with ease, with the wind chuffing up your coiffure, while your lady friend in the passenger seat basks in the mellow sunlight, or streetlights. 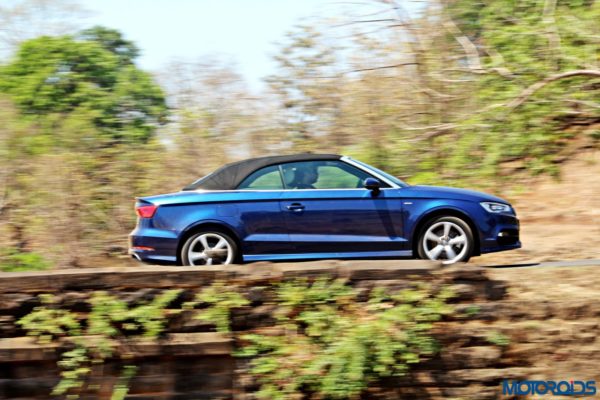 And the drive-train is here to do just that. Performance is adequate for all intents and purposes.  The 7 speed DSG box learns to flatter, and things get a little more playful with the on-board paddle shifters.  Downshifts are followed by an assuring blip in the throttle, reminding you of the exhaust note, which is there for pleasant aural company. With the top down and let loose, the Cabriolet sounds perfect for its pedigree – neither too intrusive, nor too soft. Upshifts are separated by a quick bark from the twin pipes. Power is tractable and there’s no perceptible lag in spite of forced induction – these modern day, VW Group turbo petrol motors are quite effortless in their power delivery and linearity. Refinement levels are alarmingly good, and you know that you’re at the helm of an automobile that has been thawed to perfection.

Thanks in part to the new MQB architecture and aluminum-hybrid body construction (which includes an aluminium bonnet), and also to revisions to the range of engines, the body-in-white weighs 30kg less than before, and the entry-level A3 Cabriolet has a kerb weight of just 1440kg – lack of Audi’s fabled Quattro system also contributes to that figure. 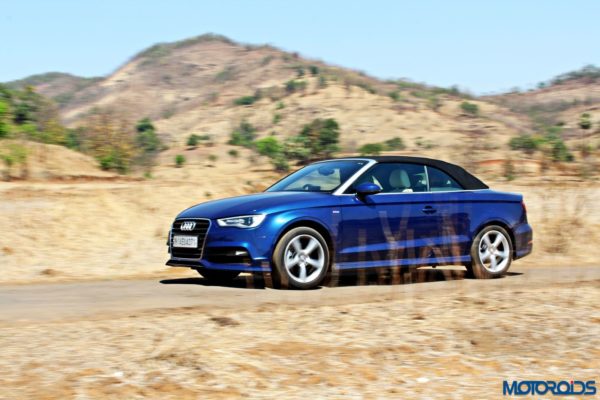 Now the A3 sedan is quite a planted car when changing direction, and the cabriolet, despite weighing 180 kg more, is similarly poised. No Quattro means less complications, but less confidence too. Scuttle shake is exceptionally well contained and spirited drives threw minimal bad vibes across the body shell. The steering is on the lighter side, overly so in our opinion. Its synthetic feel gives no meaningful feedback, and doesn’t titillate the enthusiast’s palms. But this isn’t a sports car. It’s meant to charm, and that job it does rather well. The ride is exemplary, and carries forward the A3’s usual compliance on the road. The Cabriolet takes on patchy roads with measured body confidence and aplomb. After all, it’s the alter ego of a hatchback, as well as a sedan. There aren’t any vicious thuds, judders or squeaks – it could be an excellent corporate convertible for indulgent weekends.

Head over to the  next page for the stylistic details>>>

Audis are usually designed with restraint, with the volume being bound by flowing lines and subtle creases. The A3 Cabriolet is no exception. It is essentially the A3 Sedan with its roof chopped off and a shortened wheelbase. Though it manages to exude much more panache and character than its sedan sibling. 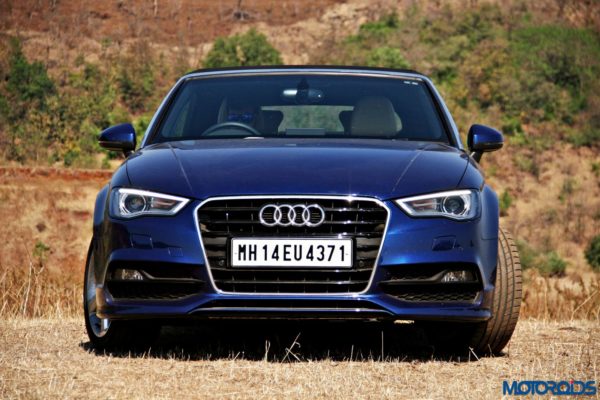 Up front, it’s the familiar Audi A3 fascia, where the “Singleframe” grille takes center stage, and is flanked by the bi-xenon headlamps with LED piping around them. All LED option isn’t available in India, and fog lamps are conspicuous by their absence. 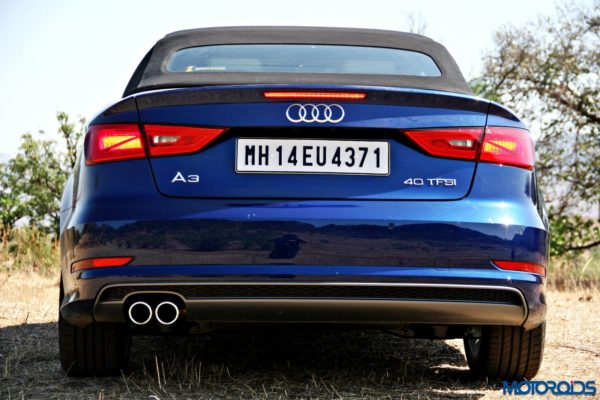 The sides have minimal drama, apart from the prominent shoulder line, and the rear, just like the A3 has those slim tail lamps, which are slightly pinched inwards. Dual exhaust tips and a  subtle diffuser to round things off.

And finally, the toplessness 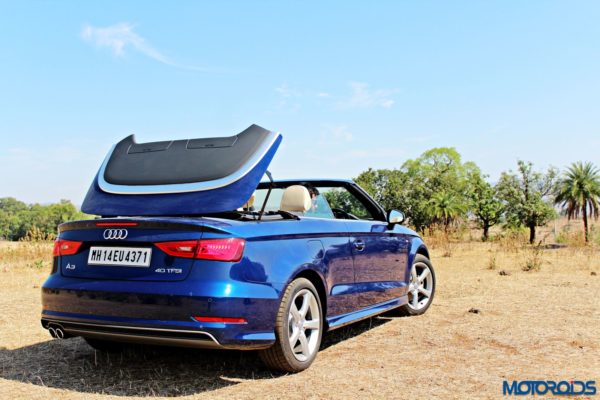 But let’s come to the convertible bit shall we? Soft tops just look better in our opinion and we’re glad that the A3 Cabriolet comes with one. That mechanized canvas top descends inside its cave in the boot in precisely 16.2 seconds. And what’s more, you can blow the top at speeds up to 50 km/h, which means no more pulling over or crawling to complete the procedure. Rain cometh? Pick it up in 20.1 seconds flat. 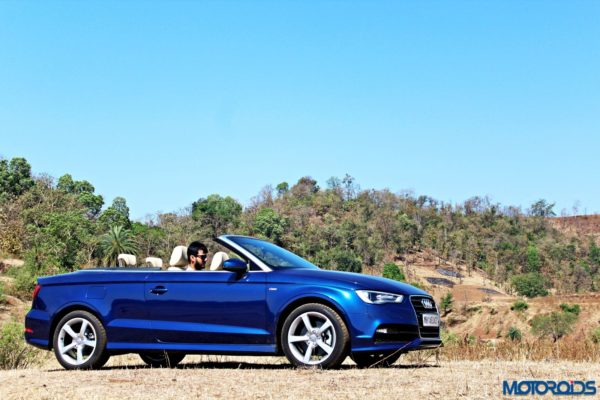 With the top down, the A3 Cabriolet looks quite desirable, at least in and around Indian settings. The windscreen frame is done up in a nice brushed aluminum finish, a la R8 Spyder, giving it a nice contrast color theme, along with the beige interiors. The S-Line trim is standard here, and adds those 16 inch 5 spoke rims and a few embellishments inside. Raise the top, and the A3 looks proportionate enough, with the black canvas adding a dollop of two-tone shading to the coloration. 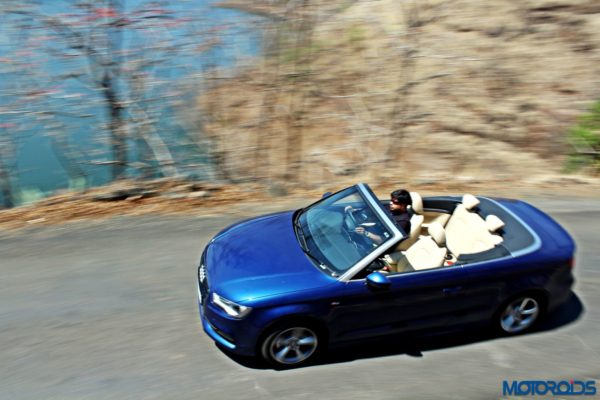 Next page for interior, features, our verdict and huge image gallery>>> 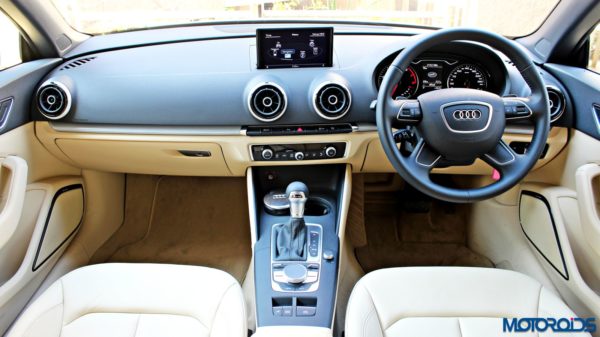 Step inside and its familiar A3 territory here. The dashboard design is simple and elegant, with a smart aluminum trim running across it. The center console is angled towards the driver, while Jet turbine design inspired air vents break the monotony and the swath of black, soft touch plastic. That said, majority of the interior comprises of the aforementioned material. Back to the dashboard or specifically the center console, where a button bank is integrated into the aluminum strip with a slew of blanks – only three of them buttons are for real. 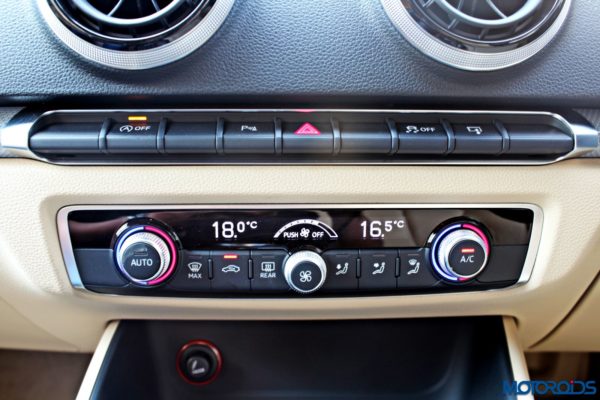 Below the row of buttons lie the well-made, tactile rotary control knobs for the dual zone climate control which are followed by a 12v power outlet beneath. Two large cup-holders take up the space below and are bounded by the Audi MMI controls, followed by the drive selector lever. 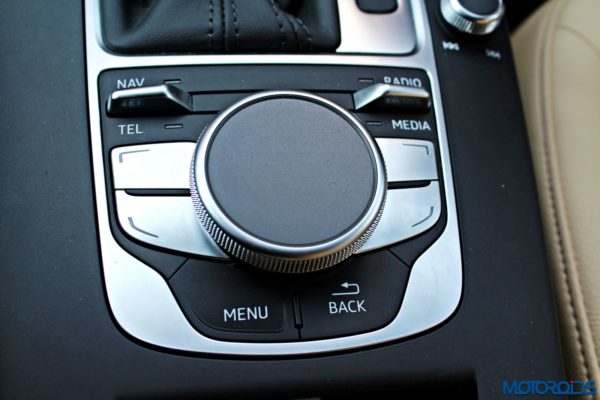 The MMI controls are beautifully put together and a comprise of a scroll wheel, four buttons around it that correspond to the main zone of the MMI interface, apart from a couple of metal, rocker buttons for multimedia and navigation. The wheel also acts as a touchpad, via which the search phonebook, navigation and radio functions can be accessed – it is also one of the best in business and recognized almost whatever our fingers threw at it. 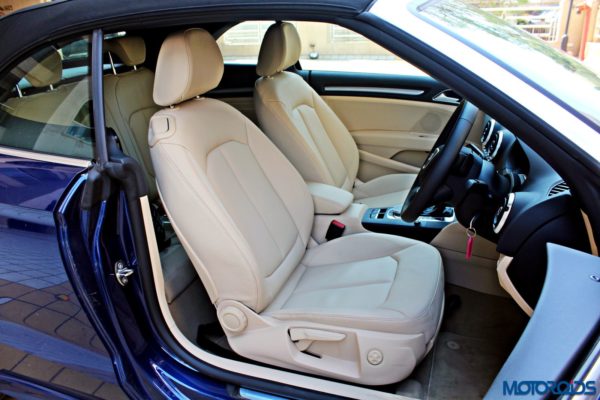 The front seats are extremely comfortable and supportive, but a glaring omission has to be the lack of power buttons for them. Instead, they’re 14 way manually adjustable. The A3 Cabriolet is a genuine 4 seat convertible – which means a couple of usable seats at the back, ingress to which is fairly simple via flattening down the front seat back. 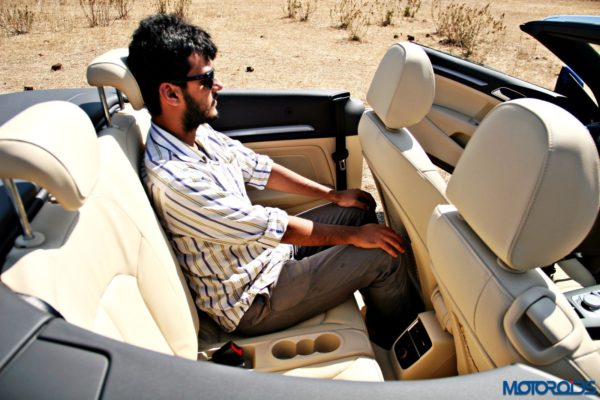 Leg room at the back is decent, with just about an inch to spare before your knees mash with the front seat backs – don’t expect to spend a lot of time here though, once the charm of open top motoring washes away for the day. The rear seat also has a 50:50 split and a couple of outboard seatbelts. 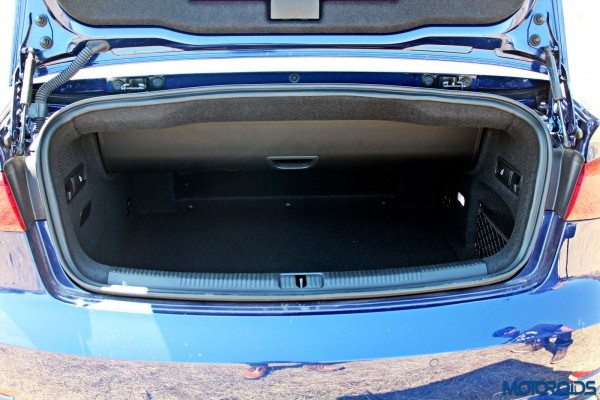 The A3 Cabriolet gets 320 liters of boot space with the roof closed, as compared to 425 liters on the A3 sedan – and, according to Audi, that’s ‘generous space’ for four passengers. 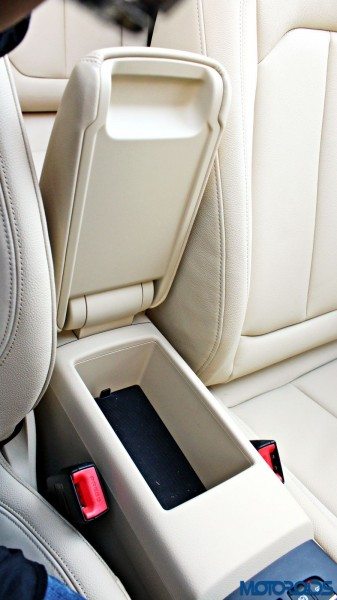 There is a central, foldable arm rest between the front seats, which also reveals a small storage bin inside with a charge-only USB port and also hosts the Audi Music Interface, which lets one connect iPods (4th generation onwards) and iPhones as well as USB storage media and MP3 players. It can be operated by using the MMI control panel or the multi-function steering wheel. Build quality is tank like throughout, while the soft touch plastics feel great to the fingertips. 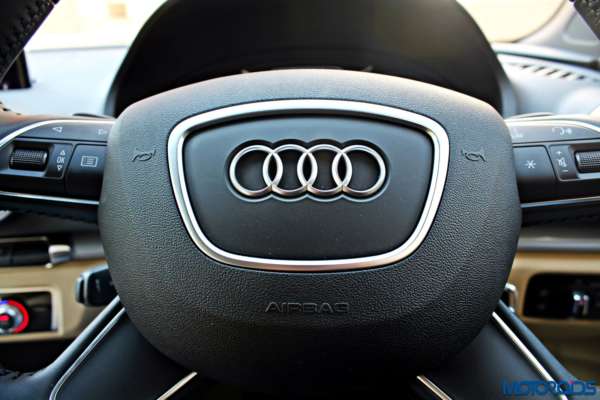 The steering is fairly large and has four prominent spokes, but the party trick has to be the high-resolution 7-inch color display which electrically pops out from the dashboard, and is otherwise hidden to maintain cleanliness of the lines. 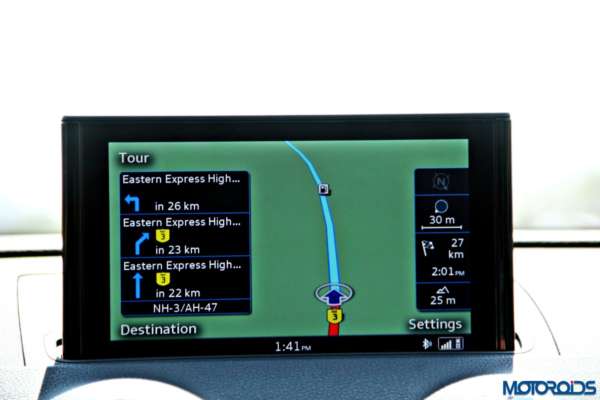 The HDD-based MMI Satellite Navigation Plus feature displays a high-quality representation of the navigation map as a 3D ground model with topographical map colouring, display of many sites and city models in 3D, choice of 3 alternative routes provided, detailed junction map and lane recommendations, dynamic route guidance (where available). The Technology Pack also adds flash memory for music (10GB), MP3, WMA, AAC and MPEG4-capable DVD player which can also be used for music and video DVDs, 2 SDXC card readers (for up to 2TB). 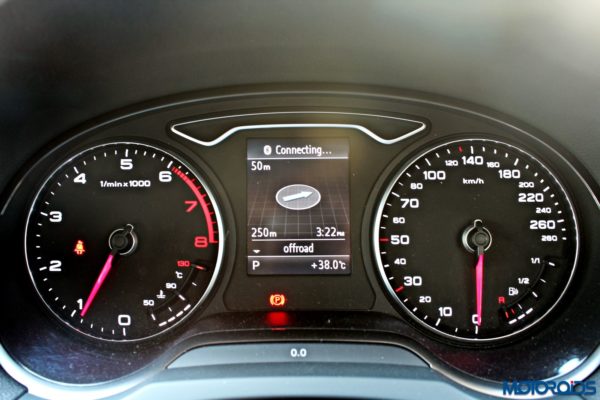 Instrumentation is also basic, yet clearly legible with a twin pod setup. Nestled between the pods is a 3.5” colour display called the Driver’s Information System. The DIS shows the radio frequency/station or track title, telephone control menu and other display information from the infotainment system such as navigation (if fitted). It also includes an on-board trip computer with short and long-term trip memory, outside temperature display, digital speedometer and door or boot-open warning. Finally, the included rest recommendation system monitors steering movements and pedal usage and warns the driver when a rest might be required. 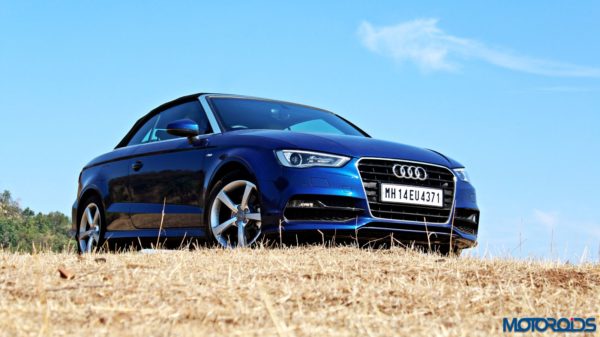 The Audi A3 Cabriolet stays true to its brief by being beautifully built, well engineered, stylish and delivering unadulterated, open-top driving enjoyment. The steering might come across as a little vague when it is feedback that you crave for, and blunt the model’s appeal to the enthusiast driver, but otherwise there is little to fault with the compact convertible. And if we were really to nitpick, it has to be the lack of powered front seats. The A3 Cabriolet is the more romantic, more adventurous alter ego of the A3 sedan, but still imbibes the pragmatic and steadfast nature of the latter. 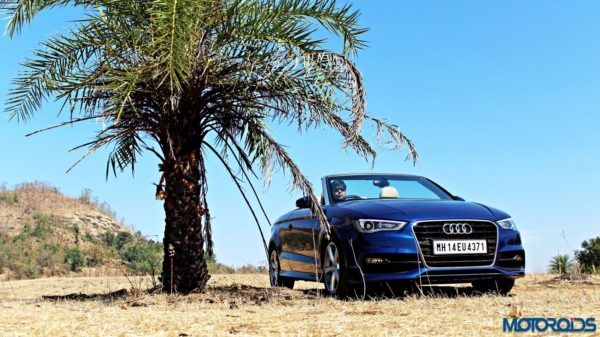 At INR 44.75 lakh (ex-showroom, Delhi), the Audi A3 Cabriolet makes a pretty compelling case for itself, as it has no immediate competitors. The Mini Cooper Convertible retails for a shade over INR 36 lakh (ex-Delhi), but, technically, belongs to a segment very different than the Audi, whereas on the other end of the spectrum lies the newly launched Mercedes-Benz E400 Cabriolet, which retails for a stratospheric INR 78.50 lakh (ex-Delhi). So if it’s pure, wind-in-your-hair motoring you’re looking at, and the retro-themed Mini just doesn’t cut it for you, the Audi A3 Cabriolet is the one to bet on.