The Audi Q3 has been the definitive entry level premium SUV choice for a vast majority of car buyers in India for some time now. While the GLA does look visually more appealing, and the new X1 is much more practical than its predecessor, the Q3 is still arguably the best-rounded package of the three. Five years into production, the handsome looking compact SUV has received its second facelift recently. We drove the all-new 2017 Audi Q3 for a review and through this article, would try to answer all the questions you have about the facelifted version. For a more thorough review detailing every feature of the Q3, head over to this article. Let’s get going

The biggest news here is that a new engine variant has been introduced in the form of the 1.4 TFSI petrol unit, that we sampled earlier in the new Audi A3 a few months back. 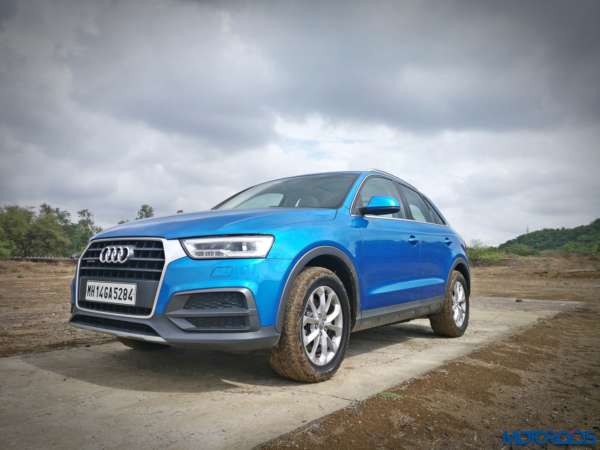 In addition, the car gets a few changes on the outside and a bit more spunk for its top of the line 2.0-litre diesel 35TDI variant. That’s the variant we drove for this test drive, and while we’ll keep our verdict on the petrol variant for later, we will let you know the specs and other details about the new engine in this piece.

Go on; tell me about the power trains on offer

With the 2017 Q3, Audi debuts a petrol engine in its Q range in India. The new 1.4 TFSI turbo petrol motor produces 150hp of power and 250Nm of torque, which may not sound much numerically, but as we experienced on the A3, it’s a pretty capable motor with great driveability, a whooshy sound note, good efficiency for a petrol engine and a propensity to rev high without any resistance. This engine is available only in FWD format, and sits lower in the Audi performance hierarchy with a ‘30’ TFSI badge as against the top diesel which achieves the next best ‘35’ TDI rating. 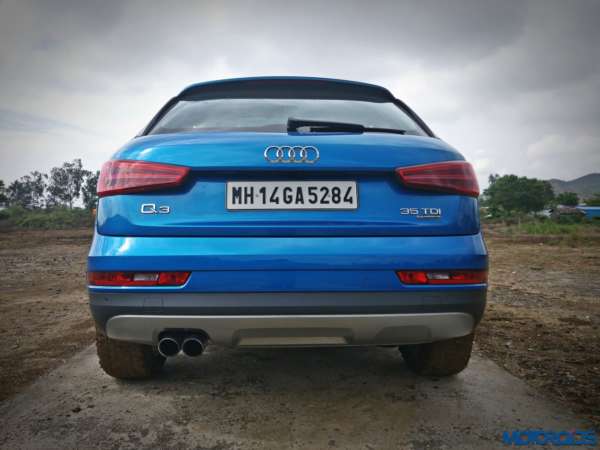 There’s another 30TDI variant available, though, which is a cheaper, less powerful version of the 2.0 TDI diesel engine, and produces 150 hp of power with 340 Nm of torque. While it’s not the best performing variant here, the advantages come in the form of substantially lower pricing and a reasonably high fuel efficiency of 18.5kmpl. As with the petrol version, this lower powered diesel variant is also available only in the FWD layout. 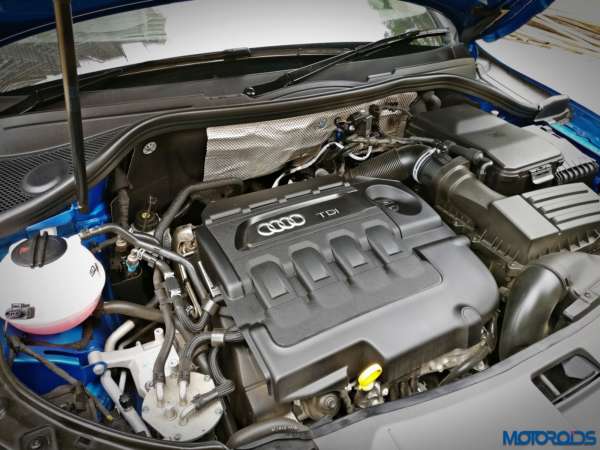 Finally, the top of the line 35TDI diesel, the one we drove, gets a punchy 184hp motor, which boasts a 10hp increment over the version it replaces and comes with quattro AWD system. Peak torque is rated at 380 Nm and together those power and torque figures translate into a 0-100km/h sprint time of a little over 8 seconds for this smart looking compact SUV. Fuel efficiency, for this version is rated at 15kmpl by ARAI.

Transmission duties for all the variants are taken care of by a seven speed S-tronic auto, arguably the best auto transmission in the class. The top spec Technology edition we drove also comes with paddle shifters.

How does it look different from the model it replaces? 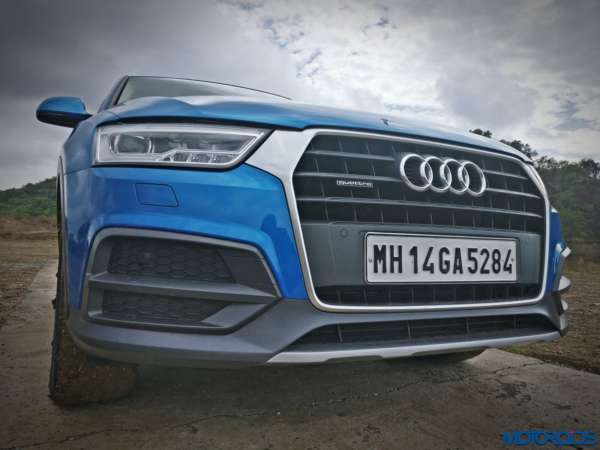 The most apparent change is the new, restyled, sportier front bumper which now features wider air inlets on the sides. The horizontal bars within the inlets have been reduced to one from an earlier two, giving the car a wider, more aggressive look. 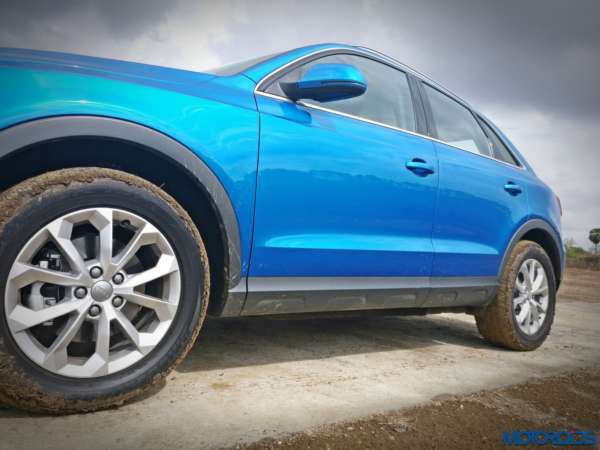 The 17” cast aluminium alloy wheels with their 5 V-spoke design are new as well and go with the overall sportier theme for the exterior. Audi has made LED headlamps with LED DRLs a standard feature on all variants, while the LED tail-lamps are now lit dynamically, which means the array of illumination units extends outwards for a more dramatic effect. Also, panoramic sunroof is now a standard feature across the range, which is a great pull for the buyers in this segment.

And what has changed inside?

The new Q3’s cabin remains similar to the version it replaces with no changes made to the interior. For the top spec Technology variant we drove, though, you get paddle shifters, a more advanced, SD card based sat-nav unit, a reverse camera and a TFT colour MID within the instrument binnacle. 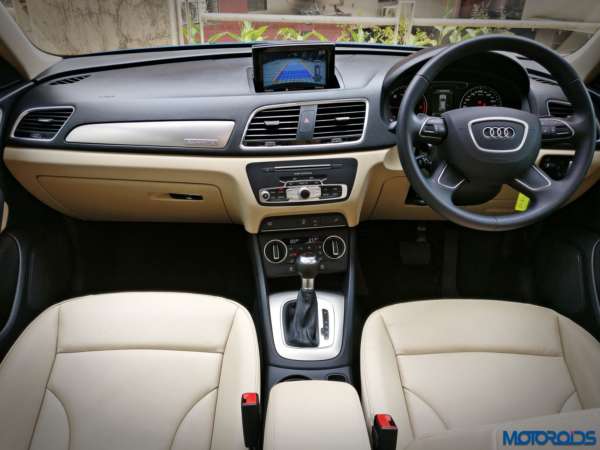 The cabin, overall, however remains same as before, and there’s nothing to complain about here. The Q3 cabin looks and feels premium, is feature rich and yet minimalistic to make everything accessible and easy to operate. 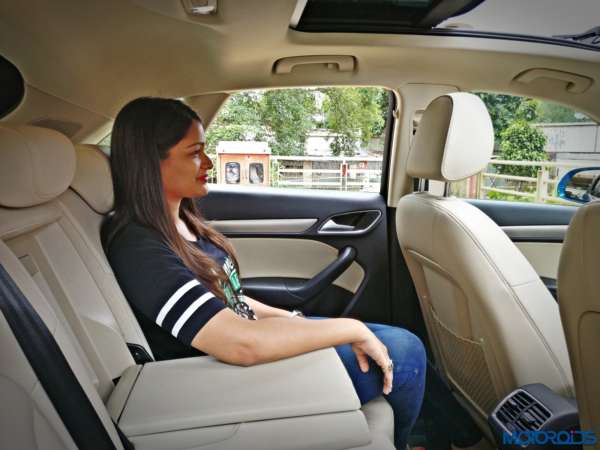 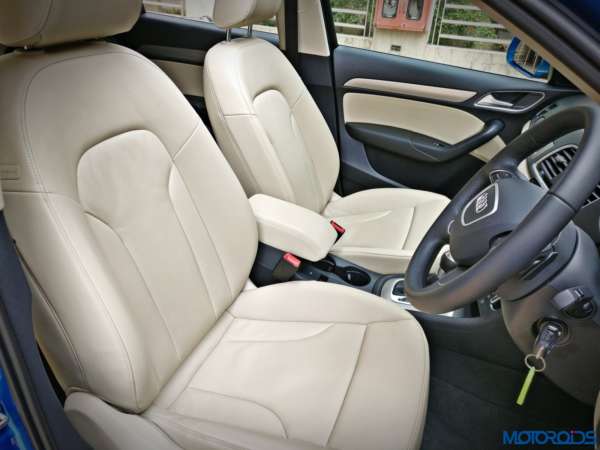 For an SUV this size, there is ample space to seat four in comfort with seats offering generous support and comfort both front and back. There’s a good amount of boot space as well and the Q3 has what it takes to carry a family of four to a long weekend getaway in genuine comfort.

How well does it drive and ride?

As mentioned before, we drove the 2.0-liter diesel engine powered 35 TDI Technology variant with 184 hp and 380 Nm.  The engine is mated to the fantastic 7-speed S-Tronic automatic gearbox. We have driven this 35 TDI model with a very small power output difference before, and honestly, it’s difficult to tell the difference from behind the steering wheel. The dash to 100 kays still comes at a little over 8 seconds with the top speed rated a little shy of 220 kays. 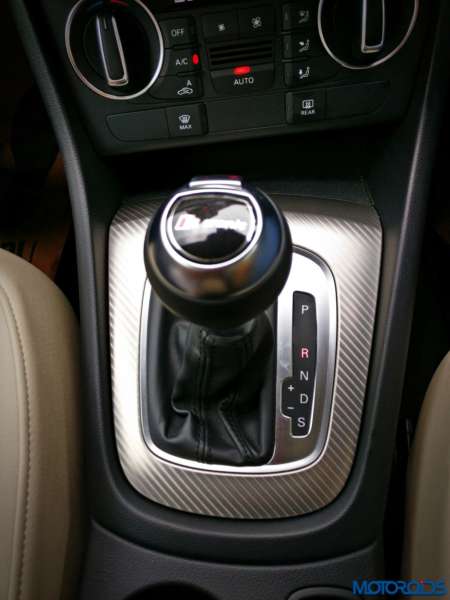 What we can share with you here is that the motor feels properly punchy and revs free to reach its 5k redline with ease. This TDI unit isn’t the most refined motors out there, and there is some noise to be heard as the tacho needle does its little dance up the curve.

The engine is pretty versatile and offer good tractability at low revs, and builds power till very high up. The S-tronic transmission, in the meantime, does a fantastic job of masking any slips from the engine by swapping cogs swiftly and at just the right time based on how much force you’ve applied on that right pedal. The paddle shifters on the Technology variant most definitely come handy when you wish to take control, and an eager driver is rewarded with instant, very tactile shifts. In S mode, the engine revs all the way to 5000 rpm, after which it automatically upshifts, if you won’t manually. 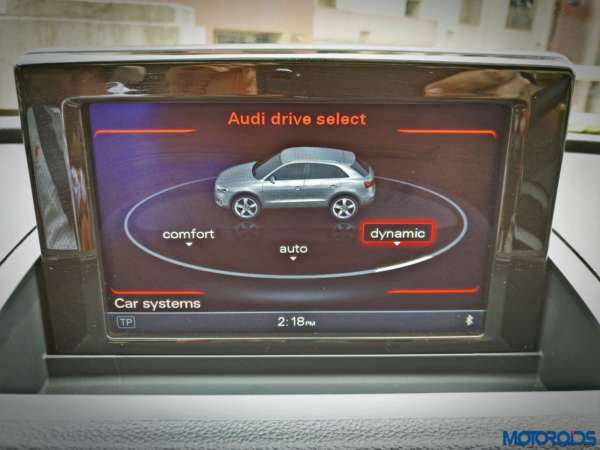 The Q3 also gets Audi’s drive select system and you can choose from Comfort, Dynamic or Auto modes. While Dynamic mode works best to make this compact SUV a quicker, faster and more engaging machine, the Comfort and Auto modes work pretty well too, if you are not too intent to rush. Comfort mode offers plenty of cushion to both front and rear occupants, making the Q3 one of the most sorted SUVs in terms of ride quality within its class.

We wish the steering was a tad heavier at speed, though the Q3 drives with exceptional confidence when shown a set of bends. There’s absolutely nothing to complain about the ride quality and dynamic ability of the Q3 – it’s just the right balance. 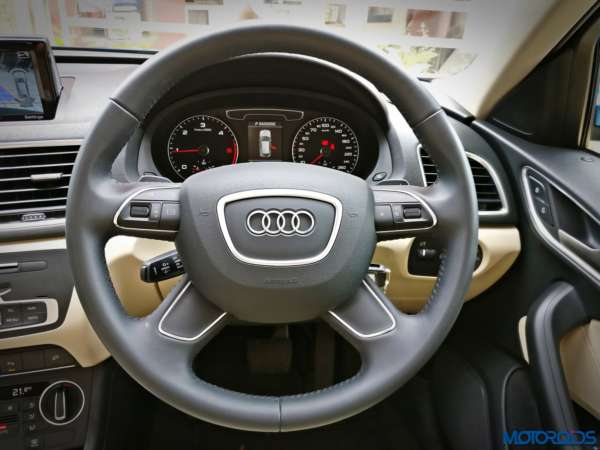 The quattro AWD Works fairly well and while it doesn’t make the Q3 a rugged, hardcore off roader, it’s enough to take it out of situations safely where other cars may end up digging themselves in. Case in point – a slushy, slippery and boggy approach road to the shooting locations we went to. Look closely and you will see that the tyres of the Q3 here are still smeared in that slimy, sticky mud. We’re sure a usual FWD car wouldn’t have made it, but having the quattro watching our back gave us the confidence to take our chances, and the Q3 managed to find its way out without any trouble. 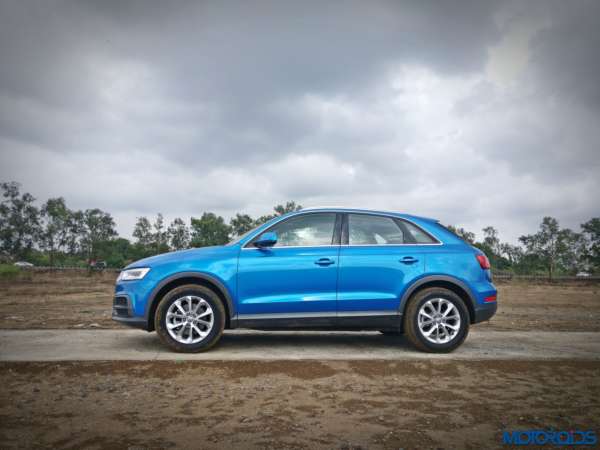 If you’re a sensible guy, you should give this one a serious thought. The Q3, as mentioned before is the most rounded car within its segment and offers the best mix of performance, practicality and a sophisticated design. The Q3 is available in a price range of INR 33 to 42 lakh ex-showroom, and variant to variant either undercuts or matches its rivals. If you’re not specifically after visual appeal or dynamic ability, you should most definitely take this one out for a test drive before making a decision.

Check out the prices of the entire Audi Q3 range in India, as tested, followed by an image gallery