The premium hatchback segment is huge in India. The top choice for many families, these cars are a very practical choice. Maruti offers us the Baleno, Hyundai offers us the i20 and then there’s the Polo from Volkswagen representing this segment of cars. Tata is looking forward to entering this segment with a new hatchback based on the 45X concept we saw at the Auto Expo earlier this year. We now have a spy shot of the interior of this hatchback which has been spotted undergoing tests quite a few times on public roads. The car will be carrying forward the impact 2.0 design language.

On the inside, we see quite some similarities with the recently unveiled Tata Harrier SUV. The centre touchscreen also looks similar to the unit in the Harrier, could likely be sourced from the same vendor. Below the screen are some buttons which could be used for various functions available on the screen. The AC vents are placed between these two panels. Further below the centre console are the buttons for the climate control system. The steering wheel gets a host of buttons and a sporty flat bottom type steering wheel. To the right side of the steering wheel are an engine start/stop button and a small storage pocket. 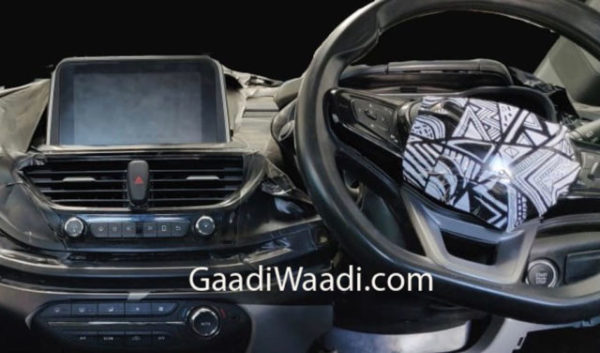 Also Read: The Wait Is Over! Tata Harrier to Be Launched on the 23rd of January 2019

We expect the car to be made available with tweaked variants of the Revotorq and Revotron power plants found on other Tata vehicles. Given the sporty appearance of the vehicle, a JTP variant of the car would be something we look forward to seeing. As seen in the spy images, the car seems to receive a six-speed manual gearbox. Also expected is an optional 6-speed AMT which is also seen in the Nexon SUV. The car is expected to be launched by the latter half of 2019. Below are some images of the 45X concept car the X451 is based.