Home News The Wait Is Over! Tata Harrier to Be Launched on the 23rd of January 2019

One of the most awaited launches of the year, the Tata Harrier SUV is all set to hit showrooms. Tata will launch its flagship on the 23rd of January, 2019. After a couple of teasers which showcased a new feature of the SUV everytime, the SUV was unveiled not too long ago. We even drove the car and you can find a detailed review video linked below. Tata will officially unveil the pricing of this SUV for the Indian market on this date. Going by some official and unofficial chatter, the car will cost you between INR 16 Lakh to INR 21 Lakh, on the road.

The Harrier is one huge SUV and happens to be the largest vehicle in its class. It looks unique and the design cues are heavily borrowed from the concept showcased at the Delhi Auto Expo this year. The SUV can seat 5 people in premium comfort and comes loaded with equipment. The cabin gets a floating type display in the centre which is Android Auto and Apple CarPlay compliant. The instrument console also gets a digital screen, with a traditional analogue needle for the speedometer. The rear passengers get their own AC vents as well and an armrest with cupholders. 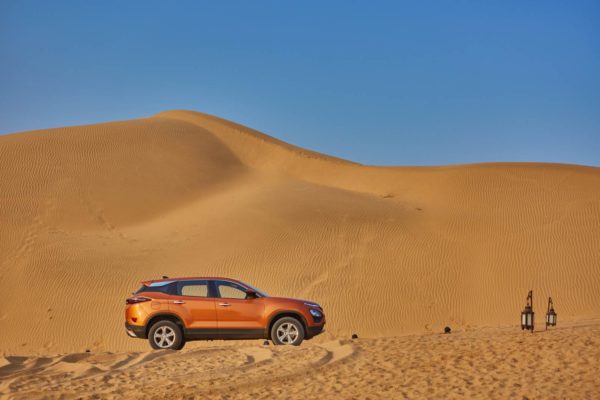 The Harrier shares its underpinnings with the D8 platform of the JLR group. The same architecture has been used for the Discovery Sport SUV from Land Rover. This monocoque chassis is powered by a Fiat Multijet engine, also seen in the Jeep Compass SUV. This 2-litre oil burner is tuned to give a power output of 140 PS and a turning force of 350 Nm. The engine works in conjunction with the drive mode selector in the cabin. Mated to a 6-speed manual gearbox only, for now, a Hyundai sourced automatic transmission equipped variant is expected to be out soon. Stay tuned for more updates on the launch of the Harrier SUV.