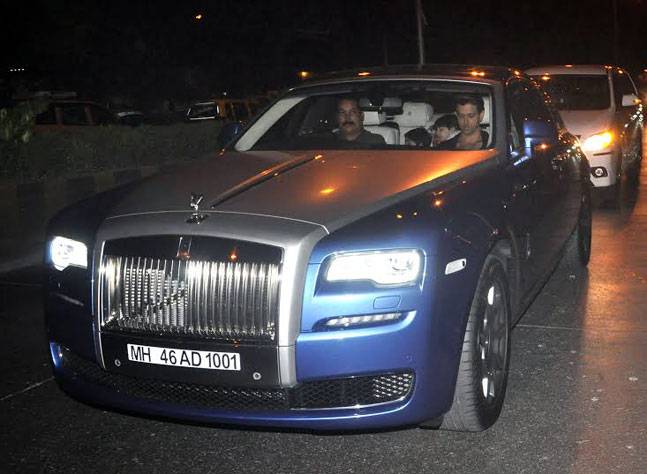 It’s hard to believe that the young man with Greek God looks who gyrated with exceptional vigour to Kaho Naa… Pyaar Hai’s tunes almost the other day, has already turned 42 this January. To celebrate his coming of age and stardom, Hrithik Roshan has gifted himself a brand new Rolls-Royce Ghost Series II. Reported to have costed him around INR 7 Crore, the Ghost seems to have been customized a fair bit, considering the the Series II starts at INR Rs 4.5 crore (ex-showroom India). Hrithik’s Ghost is cloaked in a tasty shade of blue, contrasted with an aluminium finished bonnet, which doesn’t come as a surprise as Hrithik is known to be fond of high-end cars.

Hrithik purchased the Roller for himself and his kids, Hrehaan and Hridhaan, who can be seen frolicking in the back seat.  The superstar is currently shooting for his upcoming film Mohenjo Daro, which is set to hit the screens this year. Earlier last year in January, Rolls-Royce Motor Cars had launched the Ghost Series II, an update of their most successful model ever, in India. The New Delhi launch event was celebrated with one 22-year old Paras Gupta being handed over the keys, becoming the youngest owner of a Ghost Series II in the world. It’s interesting to note that the Ghost is quite popular with celebrities in the Bollywood circle, and other star owners include Priyanka Chopra and Sanjay Dutt.

The Rolls-Royce Ghost Series II, largely based on the last generation BMW 7 Series is powered by a 6.6-litre twin turbocharged V12 engine that puts out 563 bhp of power and 780 Nm of torque. The V12 is mated to the same 8-speed ZF automatic transmission that was found on the previous model. This ultra-luxury car accelerates from naught to 60 mph in 4.9 sec (0-100 km/h 5.0 sec) and has a governed top speed of 155 mph / 250 kph. Rolls Royce has also equipped the Ghost Series II with new rear axle bearings, revised struts and wheel dampers. The interiors, of course, are as opulent as a stately home in the south of France.