Home Features Adventure: A young lass on the TVS Scooty Zest 110 VS the mighty Himalayas 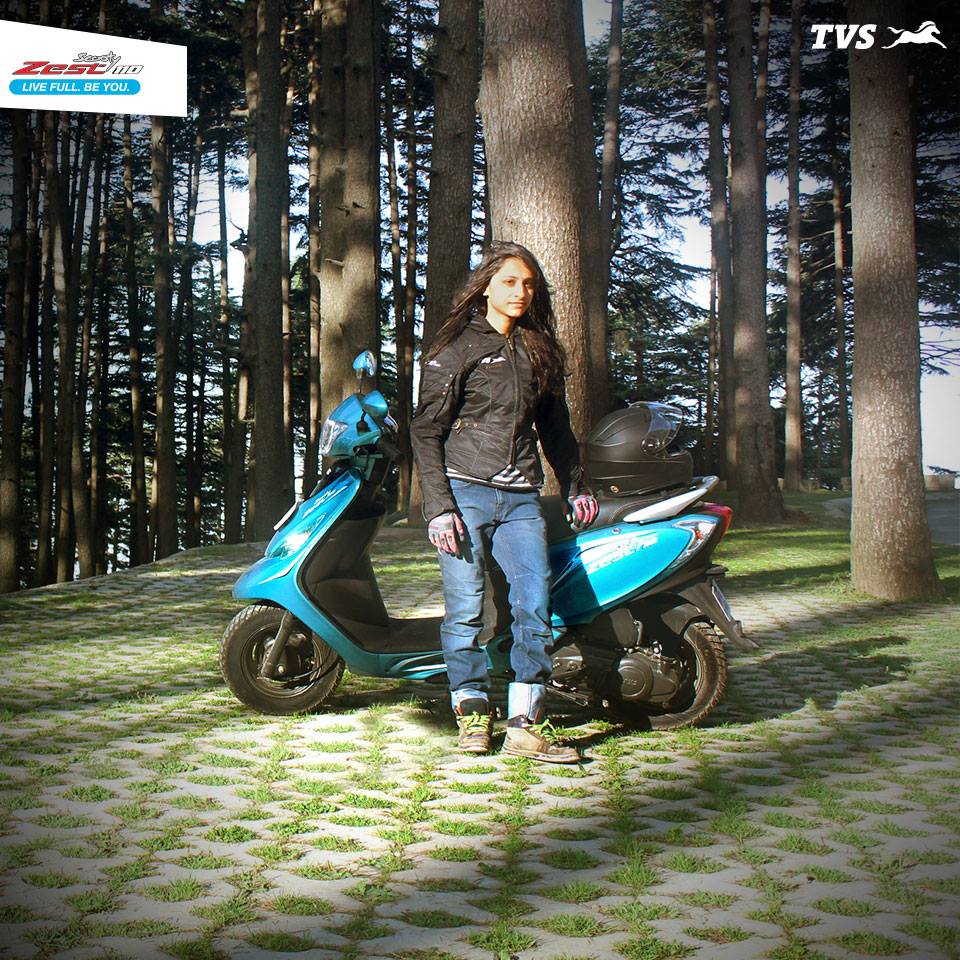 Thousands of miles away from the busy city life, is a land of tranquil and peace which every serious wanderer, car/bike guy (or not), craves to explore at least once in his / her lifetime. The land of high mountains, a skyful of stars and monasteries that warp you back in time – Leh and Ladakh – mostly sees brawny machines with unshaven, masculine men astride, thumping their way to Khardung La, the highest motorable road in the world. However, this time, these unforgiving terrains, illuminated by the most pleasant sunrays, saw an unusual visitor, cruising her way in an epic and adventure filled journey on the most unlikely machine– a TVS Scooty Zest 110.

Anam Hashim is one of the youngest female motorcycle stunt performers in a country where a girl riding a motorcycle is sneered upon. Anam had always wanted to ride to the top of the world, to the spiritually quietening heights of Khardung La. Her dream was soon to be fulfilled.

Before we talk about the journey, let us meet her ride,the TVS Scooty Zest 110 – a powerful and capable machine that’s got a great engine, fantastic features and smart, minimalistic styling – and it comes at an unbeatable price too. 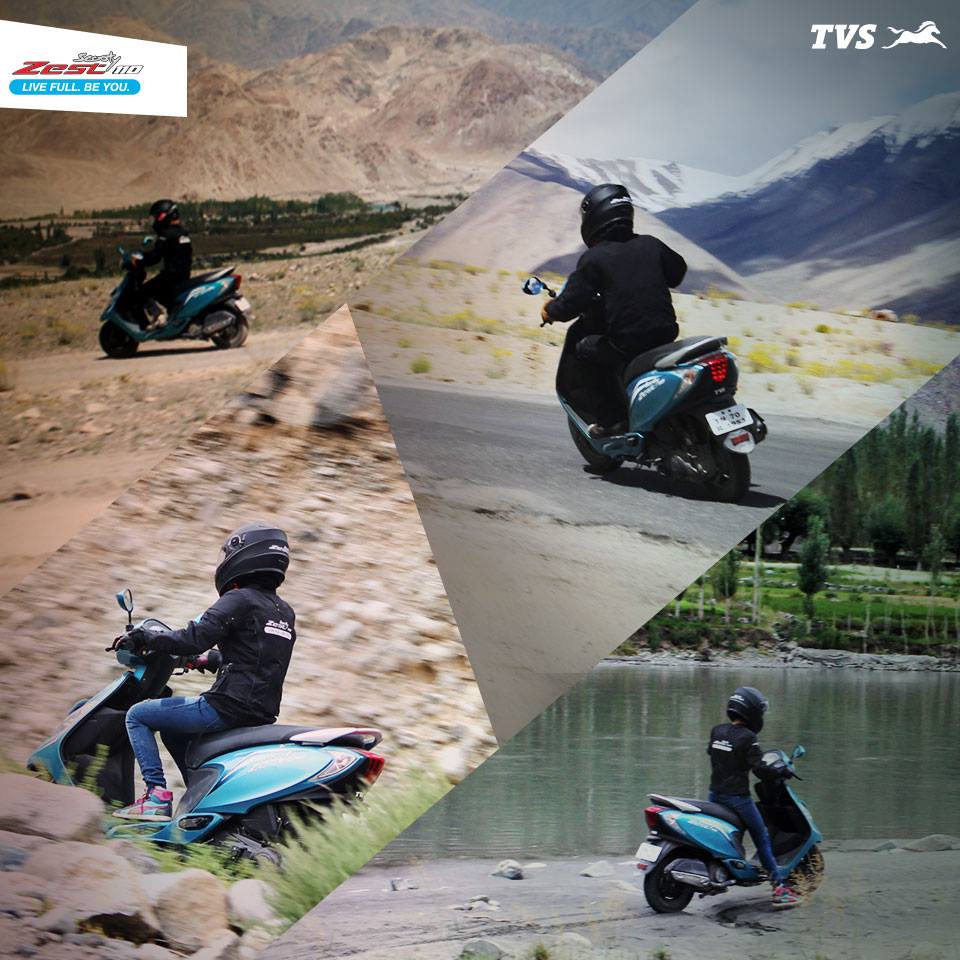 Riding a 110cc scooter to the treacherous heights of Khardung Lawas a great challenge, and Anam was keen on taking it. For the TVS Scooty Zest 110, it was a great opportunity to showcase the prowess of the scooter – it was a perfect match for both the parties.

Thrilled with the Idea of realizing her dream in the most unconventional way possible, Anam started preparing for the ride. Fully aware of the altitude related health issues a lot of people face while riding to the Himalayas, she conditioned herself for the climate with a rigorous exercise regime for one week before setting off for the ride.

Anam’s ride to her dream destination started from Jammu, where she picked her turquoise coloured TVS Scooty Zest 110 from a dealership for her journey ahead. 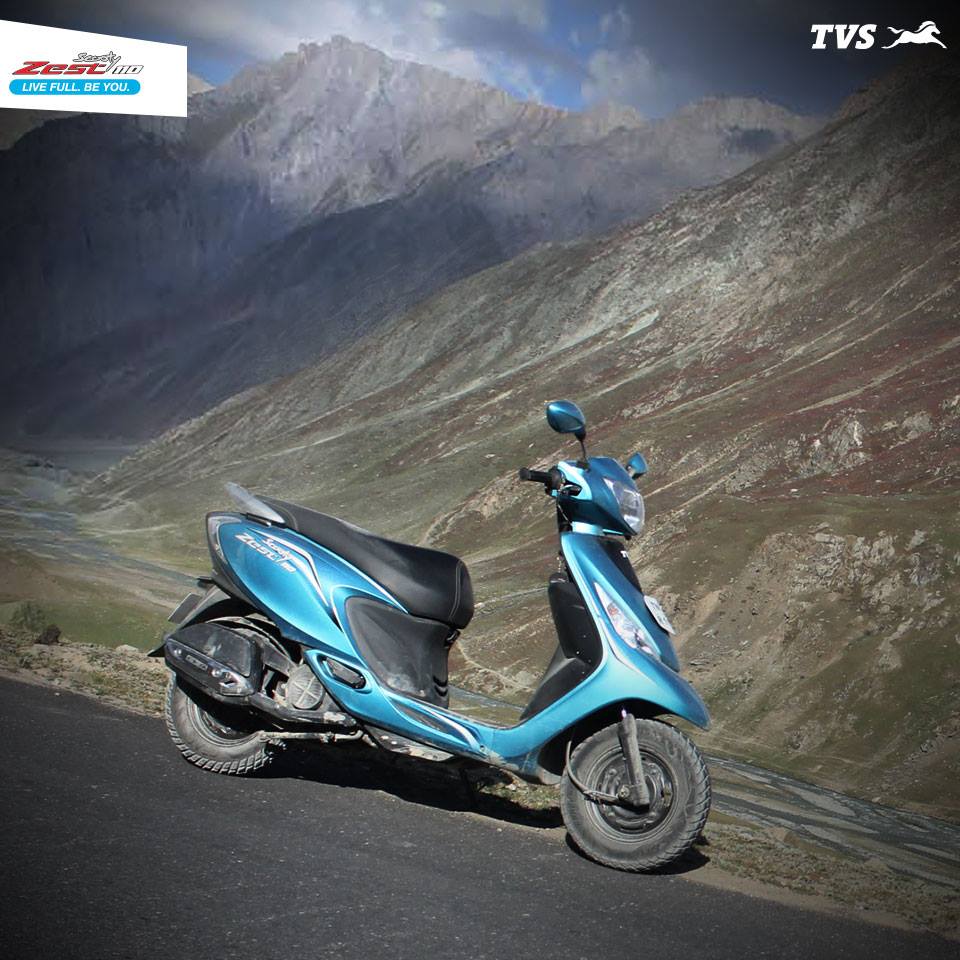 Anam started off on an unusually hot and taxing afternoon. Drenched in sweat and baffled by the oddly hot weather at such an altitude, she scooted away quickly from Jammu, thanks to some well paved roads. The next stop was Patnitop, and while the smoothly laid out roads along with the  Scooty Zest 110’s peppy nature did help a lot in making time, the bus and truck drivers who hurtle down the hills with legendary disdain to safety and other road users did create a few scary moments for her. It didn’t take Anam more than a couple of hours to reach Patnitop, where the team was to be stationed overnight before the journey ahead to Srinagar started the following day. 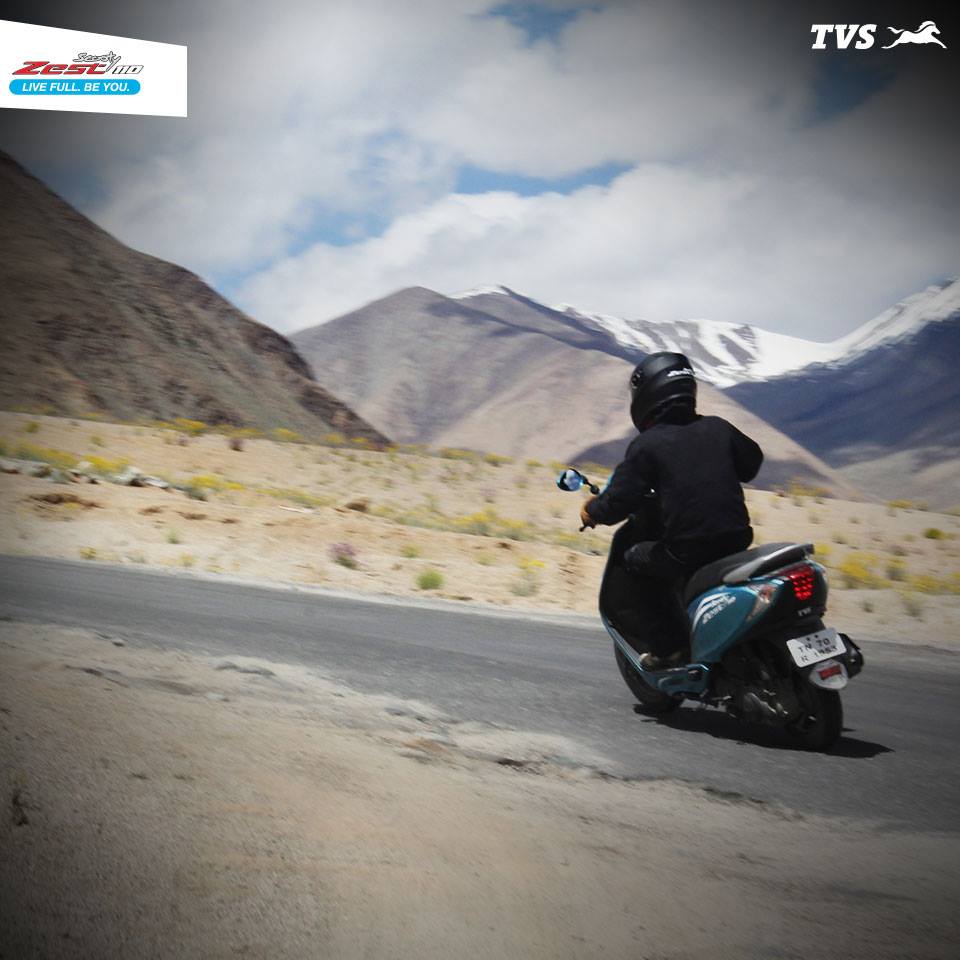 The journey to Srinagar wasn’t as smooth as the previous day’s ride to Patnitop with crawling traffic jams eating up precious time. It’s during moments like these that you truly appreciate the virtues of a gearless transmission, and the TVS Scooty Zest 110 provided the much required respite with its CVT. Anam and team managed to hit Srinagar after sunset, where they stayed in a houseboat. Anam fondly remembers the mutton biryani she had in the town, terming it “the finest” she’d had in years.

The next destination was Kargil, and the road leading to the town was badly tattered, though the Scooty Zest 110 still managed to take it in its stride with composure. En route, the team crossed Zoji La – the first big mountain pass they’d come across. 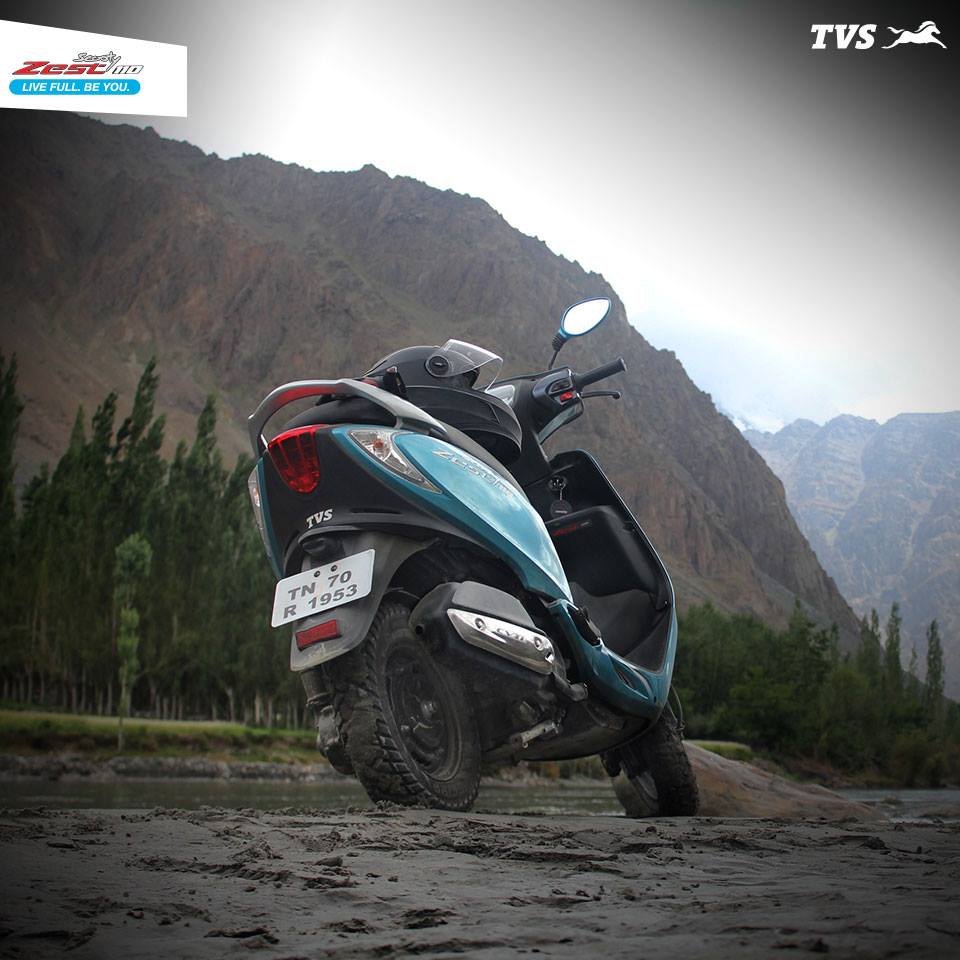 Zoji La isn’t the highest or the most challenging of the passes, but it’s stricken with stony roads and steep climbs nonetheless. The Scooty Zest 110 passed its first real torture test in flying colours. Riding through the torturous terrain took time, though,and it wasn’t before dusk that Anam and team managed to reach Kargil, where they would rest for a day to recharge their batteries for the journey ahead.

The next day, it was time to venture towards Leh – a journey which would be both arduous and enjoyable. The roads, for the most part aren’t the best to ride on, and when you find a convoy of Army trucks ahead of you, which you cannot overtake, it gets a bit more frustrating. Anything for our brave soldiers, though. Thankfully there were some stretches with well laid out switchbacks which Anam thoroughly enjoyed attacking with her cutesy, gutsy and rugged little ride. 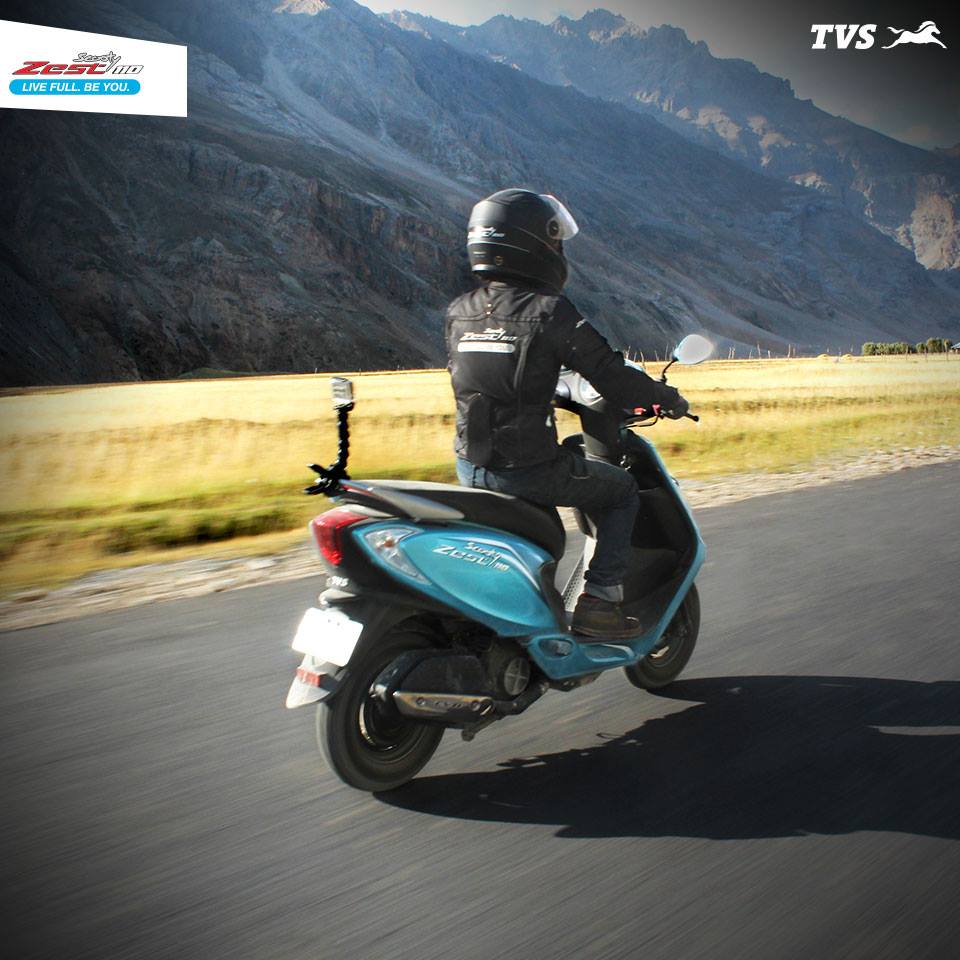