Home Features Adventure: A young lass on the TVS Scooty Zest 110 VS the mighty Himalayas – Part 2 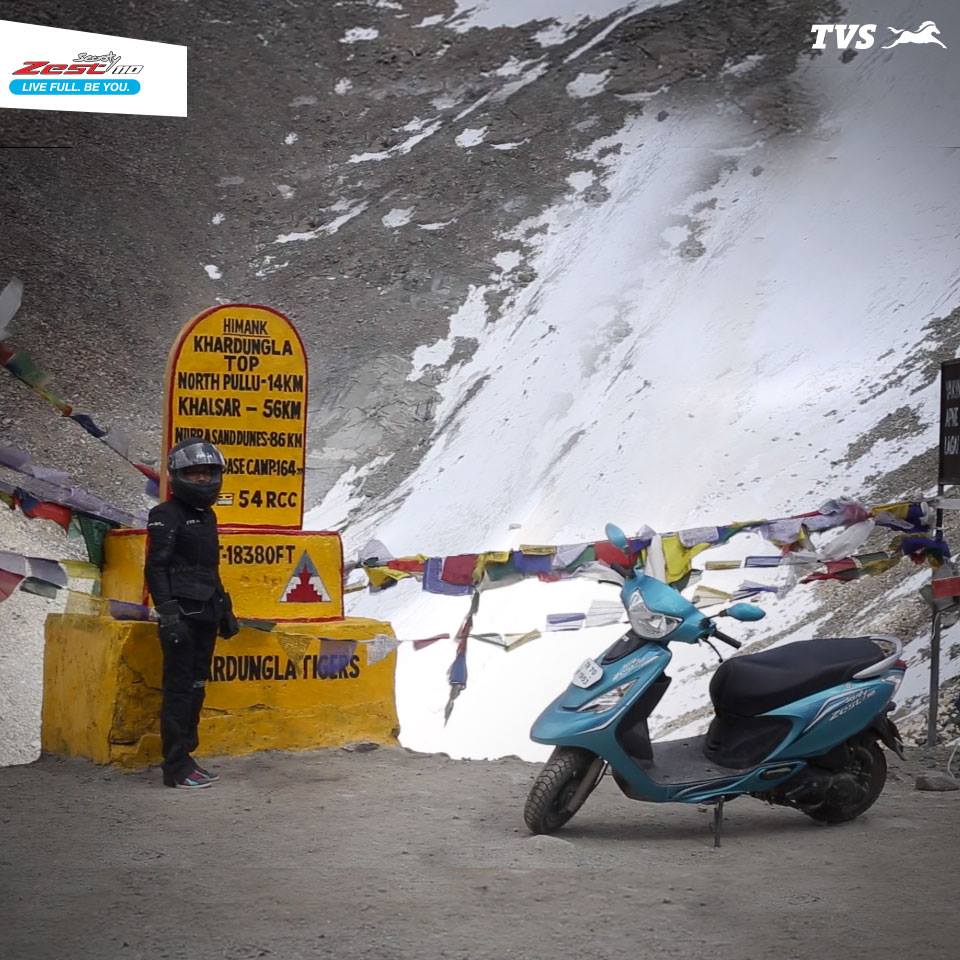 The following day, Anam was to realise her dream of riding to and conquering the highest motorable road in the world at Khardung La. The roads on this stretch, as described by Anam, were absolutely horrible, making it more of an off-road track than a motorable road. However, the TVS Scooty Zest 110 with its front telescopic and rear hydraulic mono shock suspension accepted the challenge with aplomb.

At 18,380 feet, the altitude makes the air devoid of any oxygen and can make people feel very, very sick. The low oxygen level bogs down both humans and machines, which become utterly powerless and wheezy in absence of oxygen to combust fuel. The Scooter, however, soldiered on with Zest – and why not, for that’s her second name.

Although the ride was short, at only 50Km, it took Anam some time to cover the distance. The low oxygen took its toll and Anam had to summon her auxiliary will power to march forth. No such troubles for the TVS Scooty Zest 110 though, as the nippy 110cc motor powered the steel willed woman to her destination. Once at the summit, Anam’s face glowed with a smile, where she performed a handstand in front of the Khardung La board – just as she had promised herself. 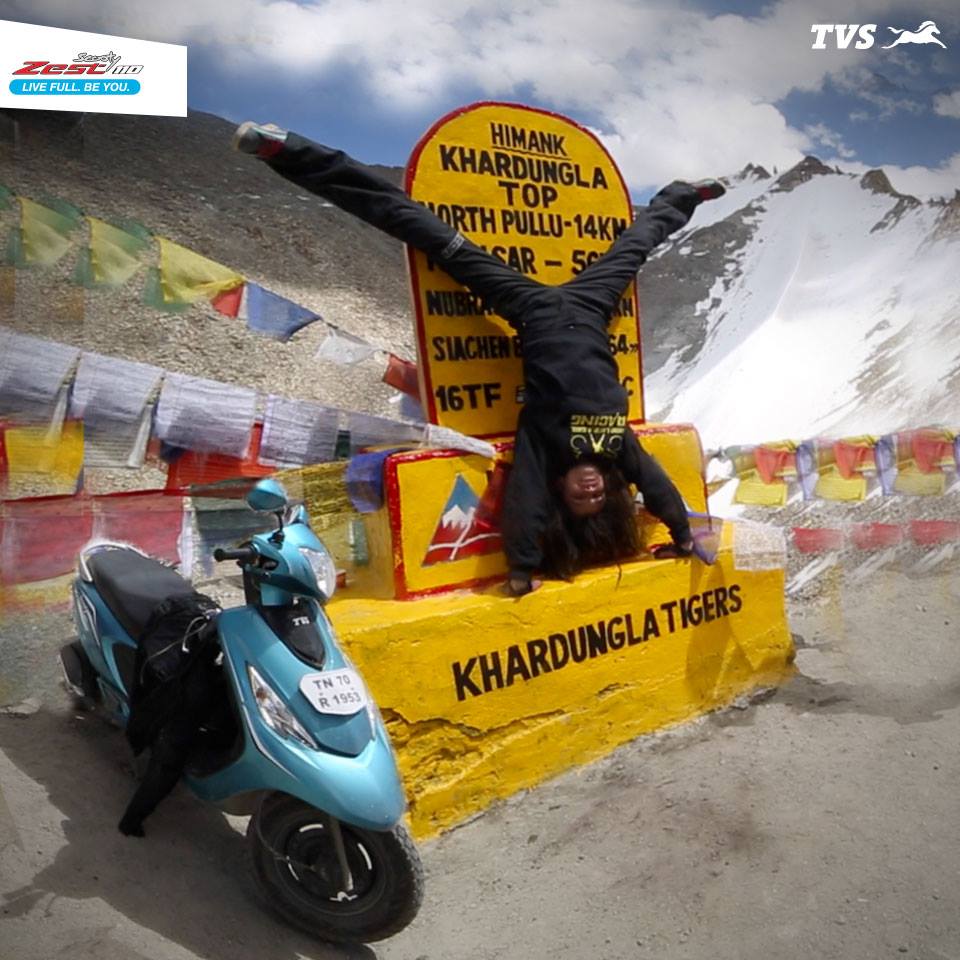 After experiencing the heady altitudes of Khardung La, it was time to ride towards the picturesque PangongTsolake – the destination for the next day. The near non-existent tarmac leading to the lake took a demonic shape while approaching Chang La, the third highest motorable road in the world, however, the TVS Scooty Zest 110 soldiered on – sans any trouble, malfunction, rattles or creaks.

Anam kept her date with the beautiful PangongTsolake and enjoyed its pristine beauty with the team over the next two days, riding around and taking some images of the pretty turquoise Zest against a breathtakingly blue Pangong. 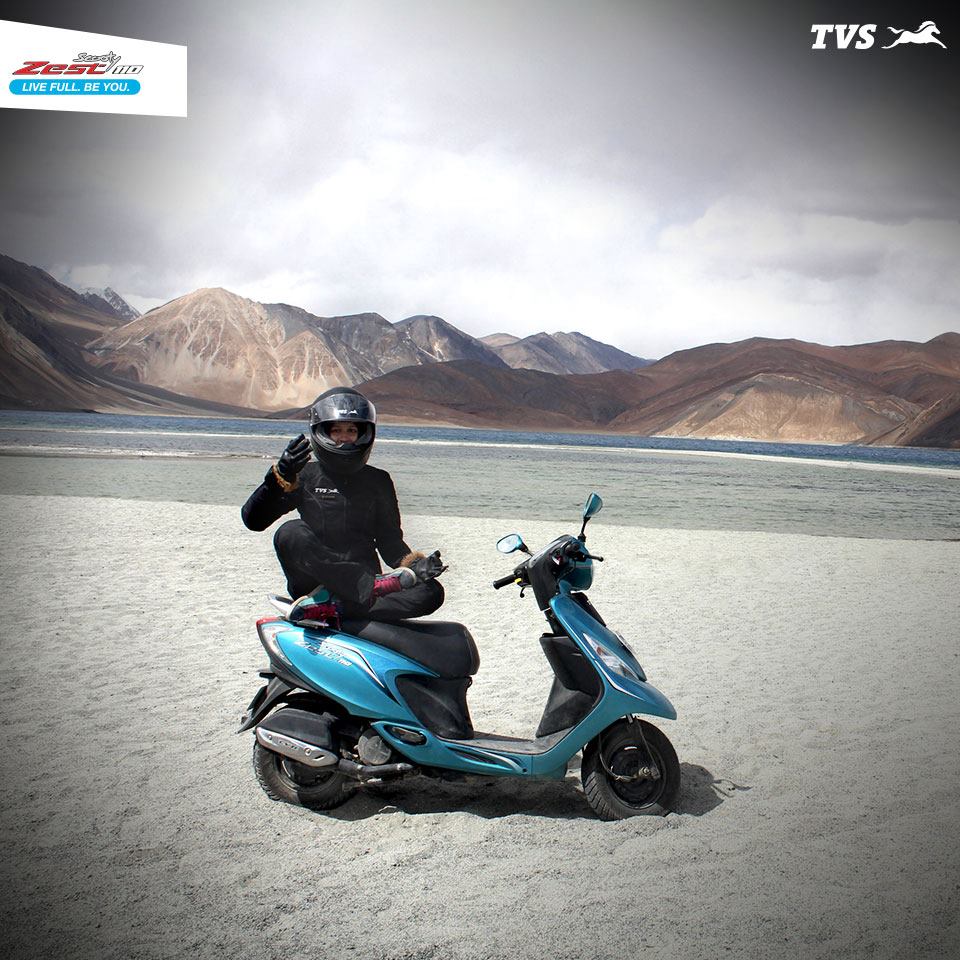 The next leg of the ride would see Anam and gang proceed towards Sarchu, a 250 km long ride – the longest section of the entire trip. On her way down to Sarchu, Anam passed through Taglang La, the second-highest motorable road in the world along with Lachulung La pass, and the visually enticing Gata Loops, which she assaulted enthusiastically. 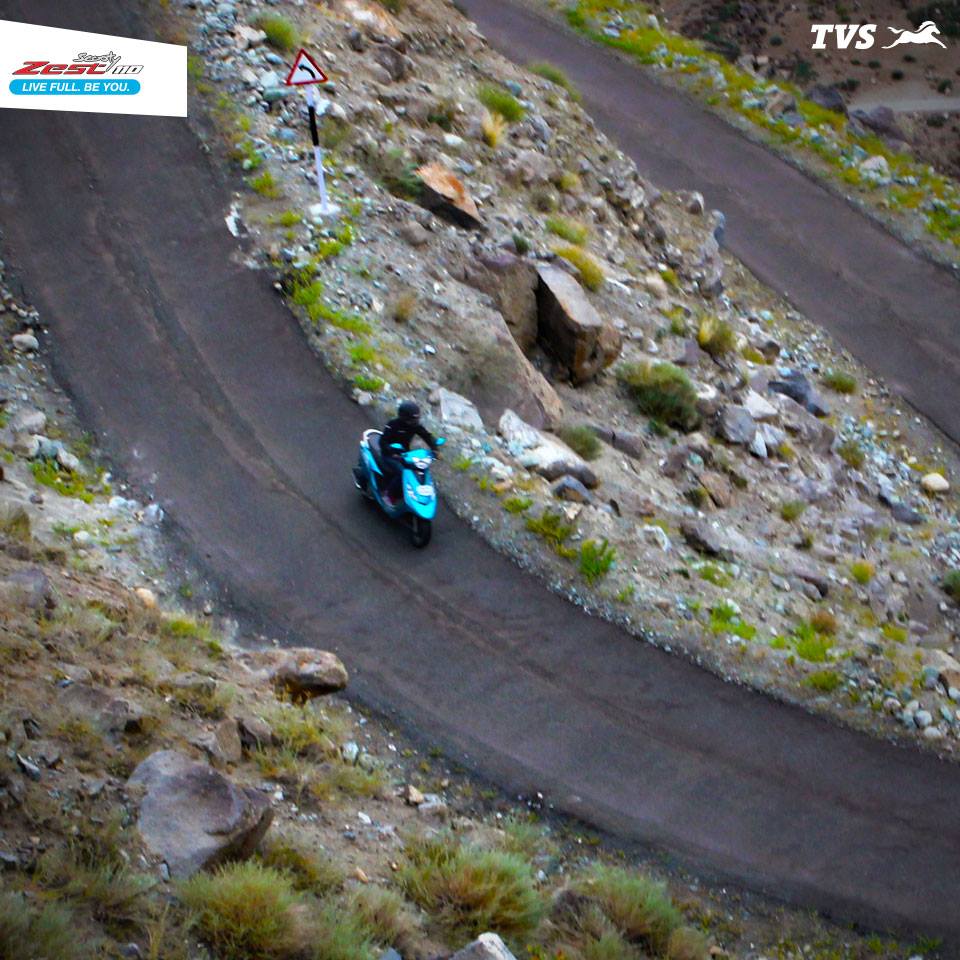 The next stretch was the ride to KeylongenrouteBaralacha La – known to be one of the most dangerous passes. Landslides are common in this area, with precariously narrow roads and a high percentage of accidents. However, with her feet resting on the TVS Scooty Zest 110’s uniquely textured floor board, Anam had a firm grip on the situation.

After spending a night at an HPTDC hotel, Anam proceeded towards Manali and witnessed what all us motoring aficionados detest so much – crawling traffic, the gearless TVS Scooty Zest 110, once again came to the rescue. Zipping through the generally clogged Rohtang La, Anam reached Manali, where the team was stationed for two days. 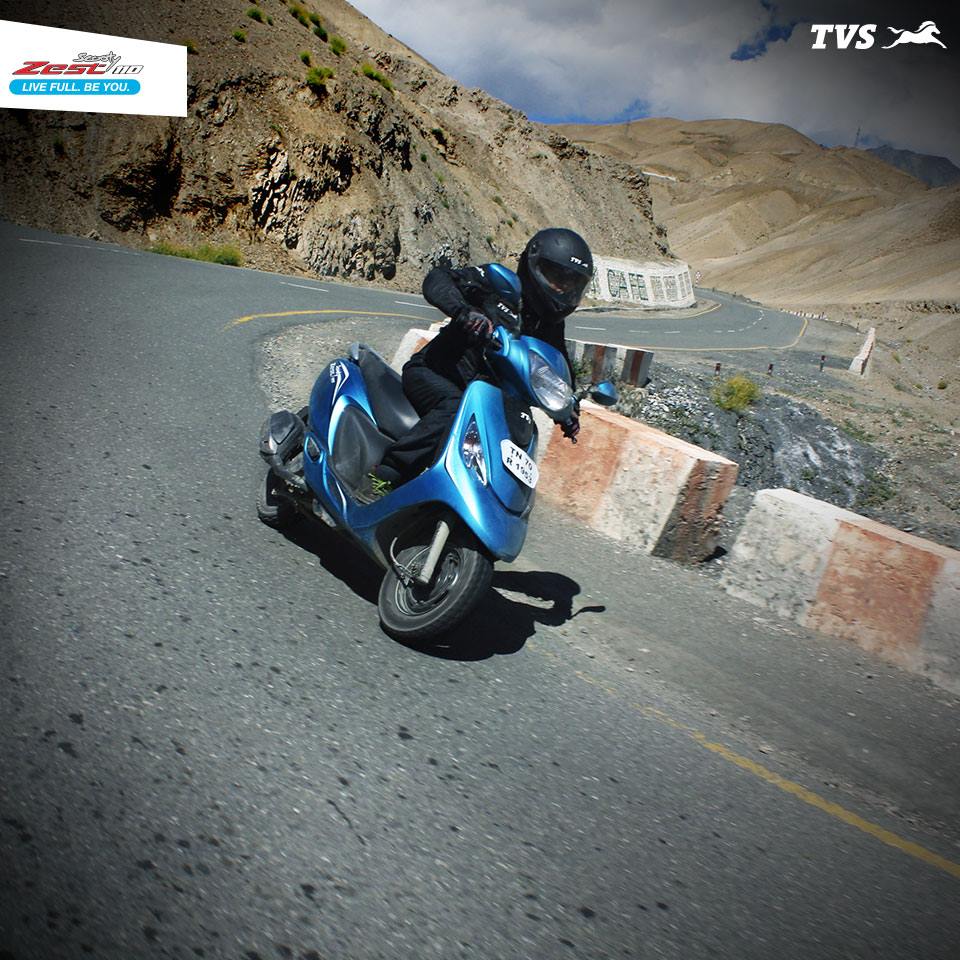 The next few days saw Anam ride down to Amritsar via Mandi and Hoshiarpur with a small detour to Wagah border where she enjoyed watching the famous flag ceremony. The ride concluded in a divinely blissful way for Anam, at the Golden Temple in Amritsar.

It’s been some time since Anam undertook this ride, but the tribulations she faced during the adventure, and the sweet memories that she brought along in the Scooty’s massive 19-liter under seat storage have been etched forever in her memories. She’s in love with the TVS Scooty Zest 110 after the ride – the sturdy scooter which tackled all the challenges posed by the mighty Himalayas with confidence, and helped her realize her childhood dream. 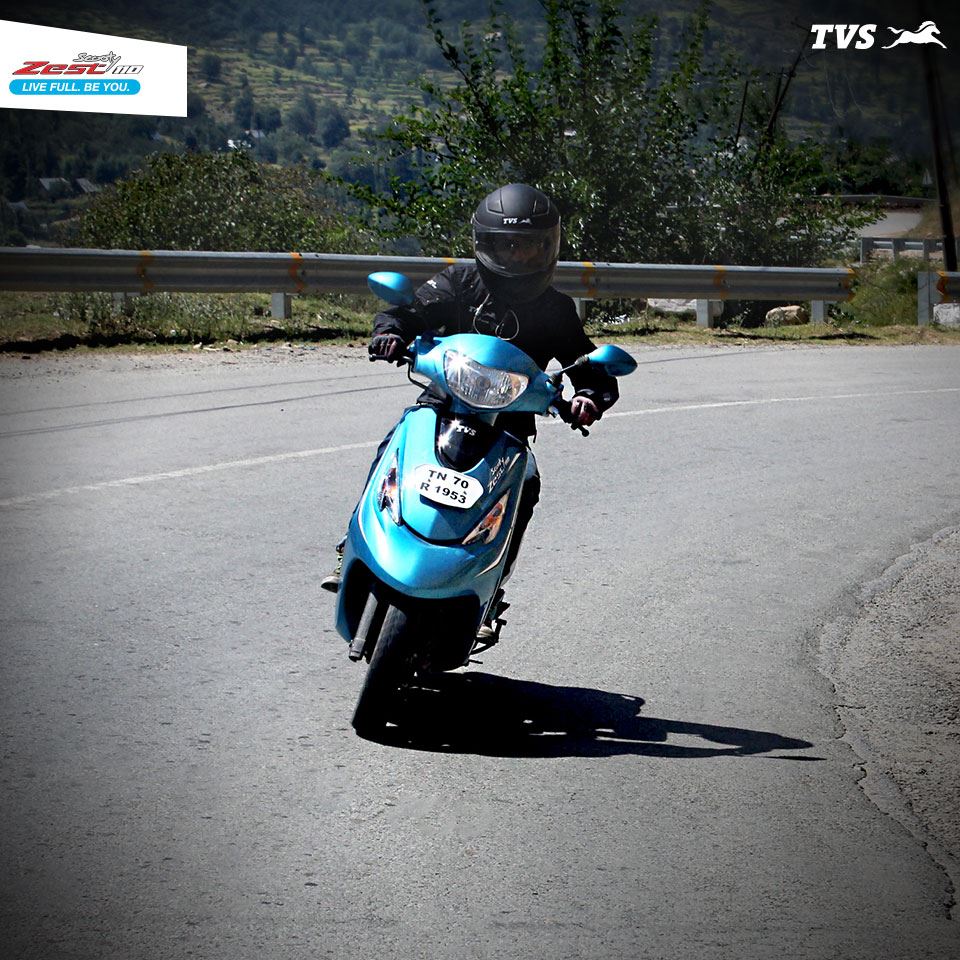