The Range Rover Sport received quite a few updates for the 2019 Model year. This SUV from the Land Rover stable is aimed to offer a better on-road performance without compromising on the off-road capabilities, that is why the car gets a Sport suffix. This bulky off-roader gets the distinctive road presence offered by every Land Rover vehicle, with the confidence of going anywhere and having its occupants surrounded in extreme luxury. Here is our review on the beautiful SUV with a video at the end. Do bear in mind that the car that we tested was an HSE trim with a few customised parts which are not a part of standard equipment, we let you know about such options in the video. 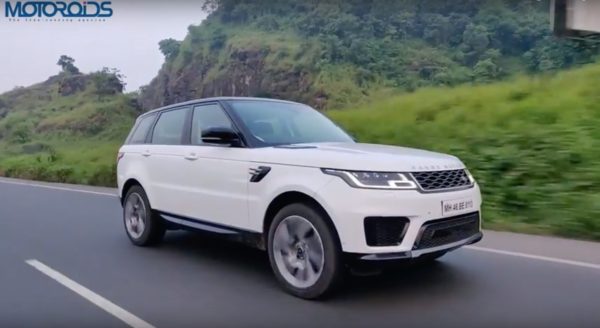 The first changes you will notice in this car are done on the front fascia, you get a new headlight unit, which offers a variety of different LED lights. Our test car, the diesel HSE variant comes with a beautiful matrix unit with 52 LED lights. The front bumper of the SUV has been redesigned to make the air vents more efficient and also offer a better look. The side profile more or less remains the same but we do love the new 21-inch rims on this car which are wrapped in 275 section rubber. The rear gets a new slotted spoiler which directs airflow in such a way that the rear windscreen does not get very dirty. The tail lamps also get a full LED treatment and both front and rear indicators are dynamic and look rather beautiful. The SUV gets a dual exhaust with a trapezoidal shaped outlet which completes the look of the rear end. The tailgate is power operated, offering you abundant space, two buttons in the boot area can be used to raise or lower the rear end of the vehicle for convenience. 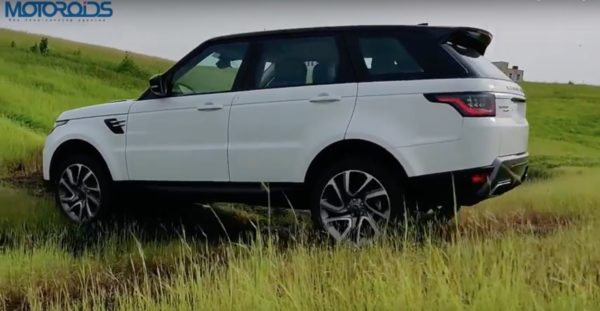 The interior of the Range Rover Sport is a very nice space to be. As one would expect from a car in this price bracket. The changes include by Land Rover are much more than a normal facelift, the interior feels a generation apart from the pre-facelift model. There is leather everywhere your eyes go in the cabin which adds to the premium feel of the cabin. The Front two seats are huge and offer you very good support, the front seats also get individual armrest if you do not wish to chare the huge centre armrest with your passenger. Storage space in the car is abundant, you get a split glovebox which is quite large. The centre gets covered cupholders and a massive cooled storage area underneath the centre armrest. All four doors get large door pockets, however, the design of the front door pockets does not allow the storage of 1-litre water bottles. The rear bench is also very comfortable although we would have appreciated a bit more of legroom over there. The rear passengers do get a lot of AC vents so cooling will never be an issue. The boot offers 784 litres of space, which can be further extended by folding the seats down, Land Rover also gives you a full-size alloy as a spare underneath. 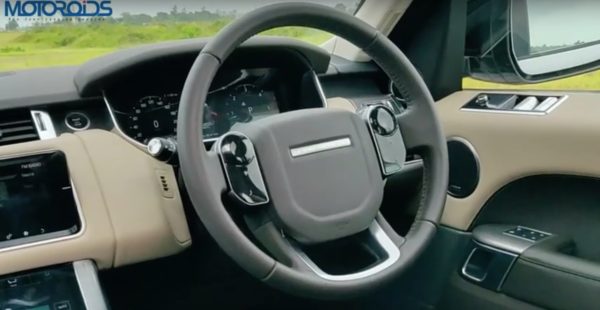 The Sport is equipped with a huge array of equipment, you get ventilated seats in the front, 4-zone climate control, a digital instrument console and much more. The most striking change in the cabin is the introduction of the InControl Touch Pro Duo Infotainment System. The system, first introduced in the Velar uses 2 touchscreen displays to virtually control everything in the car, replacing all buttons. We have made a separate video on this system which is linked right below, do watch it to know more about it. The driver gets an all-digital instrument console which can be customised, the steering mounted controls are backlit and feel very nice to use. You get a range of driving modes to choose from in this SUV and thanks to the air suspension, the ground clearance of the vehicle can go as low as 210 mm and as high as 290 mm. Another new feature in the face-lift model is the introduction of gesture control for the sunroof blind, which can be opened and closed with the flick of your hand. The list of driver aids includes an adaptive cruise control which slows the car down if an obstacle is sensed. You also get a lane departure warning feature and a blind spot monitoring system which help you drive this huge car with ease. The car although gets only one rearview camera, which is kind of disappointing considering even lesser priced cars now offer a 360-degree camera as standard.

Powering this huge car is a 3-litre V6 diesel motor good for 256 hp and 600 Nm of torque and is mated to a smooth 8-speed automatic transmission. This 2.1-tonne car can accelerate to 100 kmph in 7.1 seconds and has a top speed of 209 kmph. The driver seat feels very special and different from other cars, while most cars wrap around you the Sport makes you feel like a king or a queen who is commanding a huge car. Straight line performance is outstanding, you feel the torque pulling you like a locomotive and you get a sense of being unstoppable on the road. The suspension changes have had quite a few changes to make this driving feel possible and now sits on the firmer side. The driver may not complain about the stiffness but it would not be appreciated by the rear seat passengers, but hey! The name says Sport, remember? The fuel efficiency we got from the car was 7 kmpl in the city and 12 kmpl out on the highway which is good for a car this size. The only let down for us was the steering of the car, which felt a bit too light for our liking, it could have been better with a bit more weight especially at the centre but hey, that’s not much of an issue. 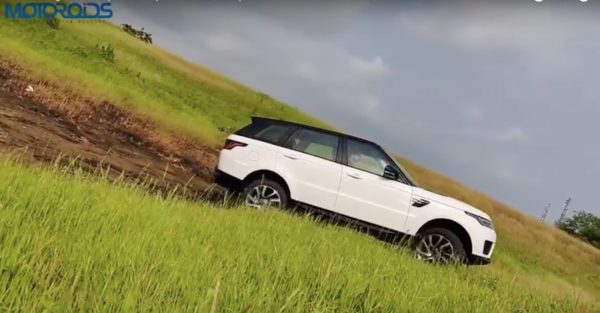 At a price between INR 93 Lakh and INR 2 Crore (Ex-Showroom), the Sport is a car that can cater to a huge bunch of customers, you get a lot of engine options as well, from a 2-litre oil burner to a monstrous 5-litre supercharged V8. The car we drove, the 3-litre HSE is priced at INR 1.3 Crore (Ex-Showroom). At this price point, you would think you have a lot of options to chose from, however, none of them are even half capable of doing what the Range Rover Sport does off the road. The Range Rover Sport strikes the perfect balance between off-road capability and on-road dynamics. So if you are someone who seeks off-road adventures with their family and also want a fun to drive car, there is no alternative to the Range Rover Sport.