I was getting married as my colleagues sampled the new Figo in Goa. Of course, I was missing something, knowing that it is one of the most important cars Ford has ever launched in the Indian market. However, it doesn’t take a genius to know that getting married is more important than driving a car, and so I went about circling the fire trying my bit to forget about the new super-mini from Ford.

This was a pre-launch event. But when Ford India launched the car officially and put a price tag on the car which managed to undercut the Swift, Maruti’s price warrior, it became imperative for me to get the car for a test drive. More importantly, I found it utterly important to pit it against a car which it was aimed squarely at – the Swift again. It took a bit of time before the shiny new Figo arrived to be evaluated, but we made sure that we had access to a petrol Swift with 1.2-litre petrol to understand the characteristics of the two cars better. 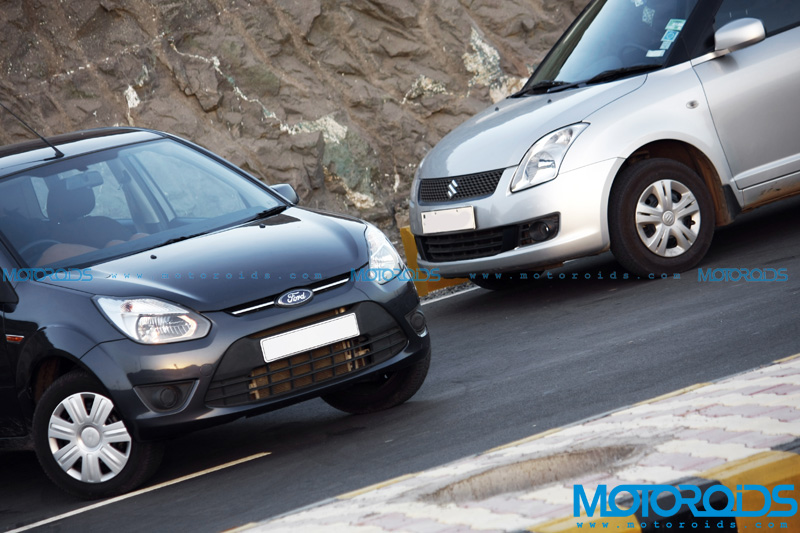 The Figo comes across as a longish looking car. The quarter panel in the rear window further adds to the perception of length. From some angles, it reminds you of the Ford Fusion which is now discontinued – squarish at edges with flared wheel arches. The Figo is an all-new design though, but has been sketched in a rather conservative manner. It boasts nice proportions all round and will not offend anyone for sure, even if it doesn’t make its onlookers emanate appreciative oohs and wows. The upswept headlamp and the big central air-dam try their bit to lend a bit of sportiness to the front, but the Figo is essentially a conformist exercise in design. The low and long overtures of the car, along with that quarter panel in the rear window and those vertically mounted tail-lamps will at times make you think of it as a station wagon, than a usual family hatch. Overall, with its nice European lines and wide track, the Figo creates an impression of a well built, solid and spacious car, which is something that’s going to be a big plus.

On the other hand, the Swift, even after being around for quite some time now, looks sporty, fresh and radical. Even with a whole bunch of new launches in the segment over the past few months, the Swift manages to hold its own against the competition in terms of visuals. It’s a car of the young at heart though. In my personal experience, those above a certain age limit don’t tend to like the Swift’s design too much. Then again, we are talking about a car here which has made the sprint to a million nos. the fastest in the history of Indian cars, so we can safely assume that it’s one of the more loved cars design-wise.

The Figo is powered by an all new 1.2-litre DuraTec engine that produces 72 horses at 6250 rpm and 102Nm of turning force at 4000 rpm. The engine is mated to a five speed transmission system, feeding power to the front wheels, as the case is in most small cars. Now 72 horses definitely don’t sound like a very potent bunch, but the Figo has ample usable power to make it an effortless drive within the city. The car doesn’t splutter or get breathless around 1200 rpm and pulls with some degree of reassurance. However, it’s only after 3000 rpm that the real power starts kicking in. Ford gearboxes have always been some of the best in the business, at least in their class, and the same applies to the Figo as well. The five speeder shifter finished in aluminium is nice to hold and slots in with great feedback, fluidity and precision – reminiscent of the fabulous Fiesta shift action. Overall, the engine of the Figo does make you wanting for more once you hit the highway, but doesn’t disappoint you within the city. 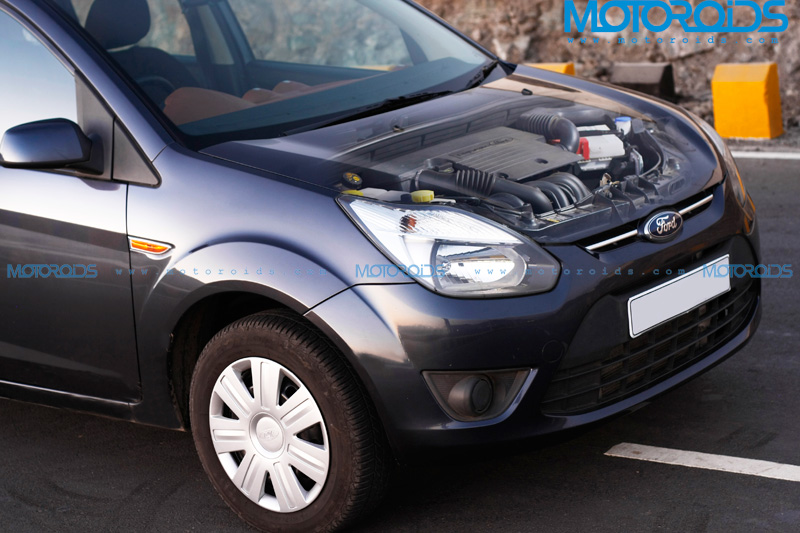 The Figo’s 1.2 DuraTec engine may not be the most powerful in its class, but is very driveable with plenty of torque lower down the rev range

The new K-series engine of the Swift, on the other hand, is the envy of the hatch pack. Producing a peak power of 85PS at a relatively (compared to the Figo) low 6000 rpm, it boasts of the highest specific output in its class. The peak torque figure too, 113Nm at 4500 is also the best in class. The higher specs reflect in the peppiness and acceleration of the car as well. The Swift is easily the quickest car of the entire hatchback segment sporting 1.2-litre engine, and also boasts of a pretty high top speed. The good thing is that the driveability of the car within the city, which was a bit of an issue with the earlier 1.3-litre engine isn’t anymore a problem with the K-series engine plonked in. With more twisting force lower down the rev range the engine helps the car pull in higher gears at low speeds and makes for a convenient city drive. Apples for apples the K-series engine on the Swift is definitely the better option of the two. 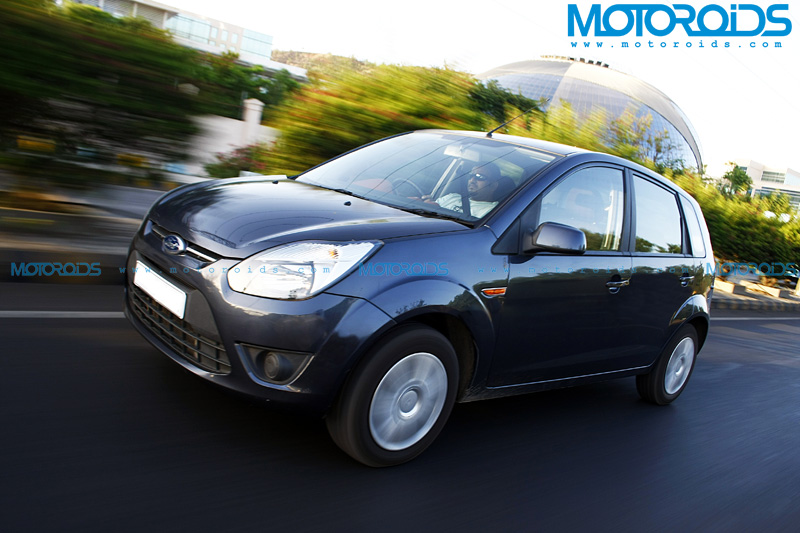 When we first heard about the killer price tag of the Figo, especially knowing that it’s a ford, a brand which isn’t inherently known to be cheap, we thought that the American company must have cut costs massively in the switchgear and other cabin components. However, when we got inside the car, it greeted us with a pleasant surprise. Not only is the overall quality of plastics and the materials used good, but the design and layout of the cabin too has been tastefully appointed. We didn’t particularly like the red treatment to the dashboard, but thankfully it’s an option so you may go for a regulation black trim if you so wish. The aluminium finish bezels for the A/C vents, with the fake leather finish dashboard look nice. The instrument cluster too has been done nicely and features the Distance to Empty readout, which is a great value add. The centre console too looks nice, although the plastic quality here isn’t too great – especially the silver finish bits. The rotary knobs for A/C controls don’t look very modern but they won’t offend anyone either. For some reason, the bonnet release lever is on the passenger’s side. It’s perplexing, as it ideally should have been on the driver’s side, and the Figo being an India specific car, there isn’t a question of using the Euro / American bits as well. It shouldn’t be much of a bother though, as you don’t need to lift the bonnet often with Ford cars. 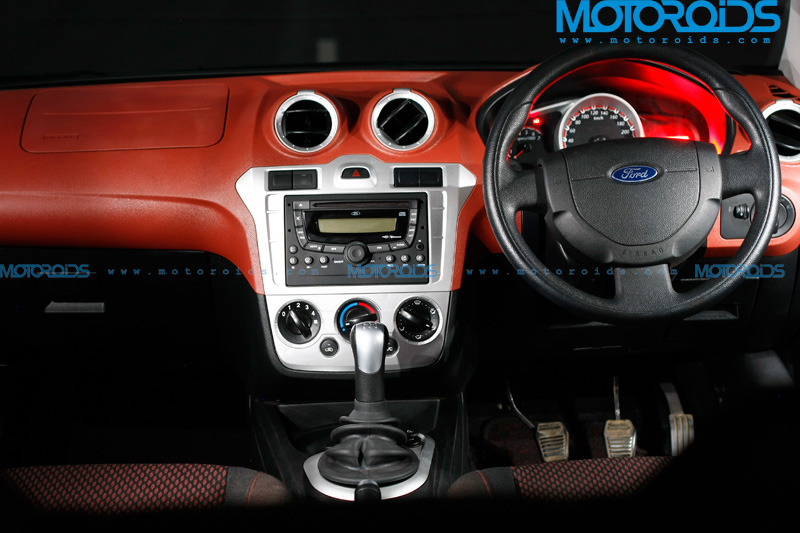 On the other hand, the Swift, even after being a jazzy proposition from the outside, has started looking a bit dated from the inside. The black plastics on the dashboard and centre console definitely feel to be of lower quality when compared with the competition. Even the instrumentation looks a tad dated now. The lack of a distance to empty meter hurts, as it has become a common feature on most cars now. Even the steering wheel doesn’t feel too great to hold, unlike the one on the Figo which looks and feels more upmarket. 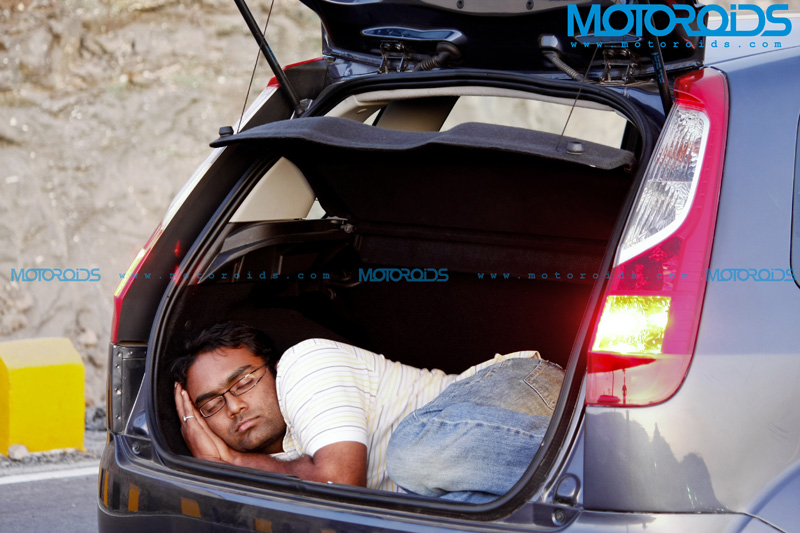 The Figo’s cavernous boot is capable of swallowing whole of Pradeb at one go!

The Swift has often been criticized by many for its slightly bouncy ride quality, especially at the back bench. The Figo is a revelation in that department. The suspension setup is such that it glides over any undulation that it comes across, and the good thing is that the new Ford doesn’t feel overly soft while trying to accomplish that. The result is a cushy ride that keeps the water in your belly settled and makes for a surprisingly comfortable back bench experience for this segment of cars. Even the quality of seats in the Figo is much better than the Swift. Properly bolstered, ergonomically designed and made of top quality materials, both the front and rear seats of the Figo allow for long journeys without any fatigue or backache. The generous legroom of the Figo is substantially more than that of the Swift, and probably the best in class. The Swift definitely isn’t the best choice when it comes to seat comfort. Not only is the ride relatively rough, but the support offered and the quality of the seats along with the lack of leg room leaves the back benchers asking for more. 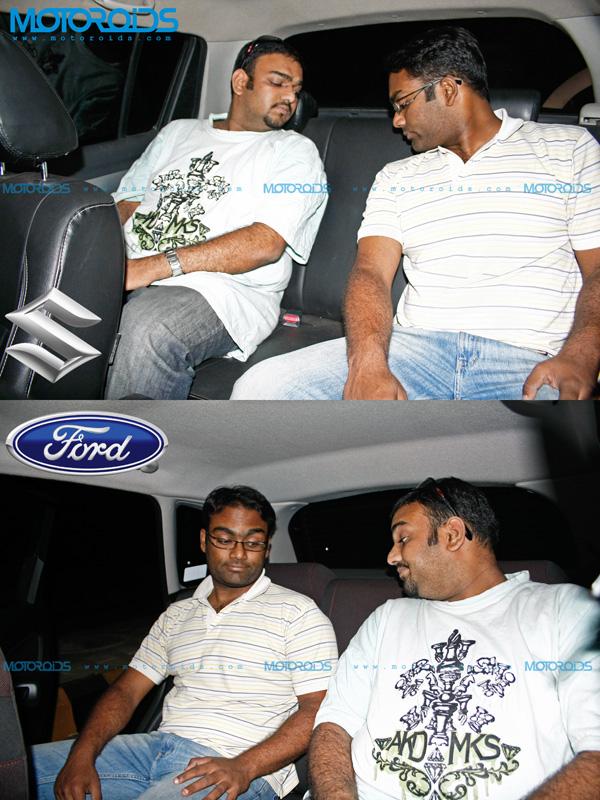 Swift has a straight bench as the rear seat, unlike the Figo which is well bolstered on the sides, but reduces shoulder space in the bargain

Another area where the Figo scores heavily is its cavernous boot for a hatchback. It’s not too far away from being termed as a sedan’s boot. Much, much more capacious than any other hatch in its segment, the Figo’s boot would swallow all the luggage of a family of four for a weekend, and then some. The Swift’s boot is much smaller, and doesn’t allow for much luggage – something we Indians are so fond of carrying while travelling.

Just having a glance at the engine specs of the two cars will help you make out that technically the Swift has to be the quicker car of the two – and it indeed is! A comprehensive road test revealed a 0-60 km/h sprint time of 5.7 seconds and a 0-100km/h timing of 13.5 seconds for the Swift. The corresponding figures for the Figo were 6.09 seconds and 15.32 seconds respectively. The Swift is almost two seconds quicker in the dash to hundred, and has plenty of low–end torque as well to facilitate good in-gear acceleration. If performance is what you are looking for, then the Swift is definitely the pick of the two. 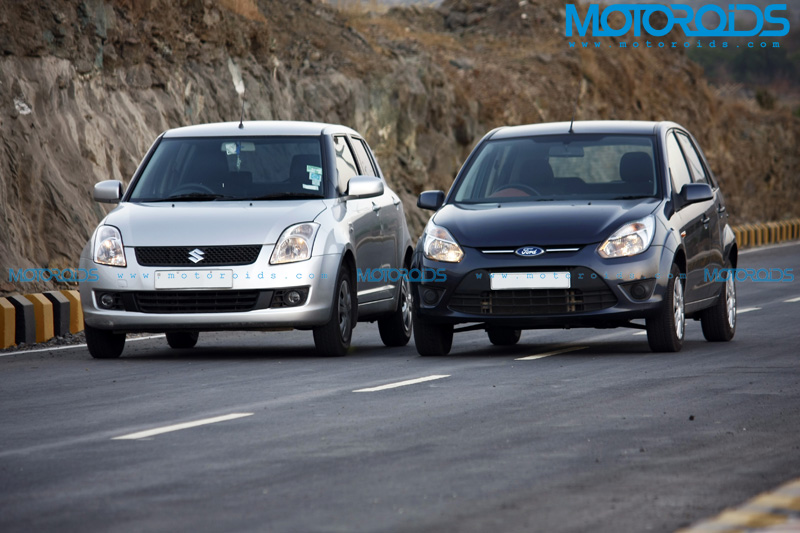 However, when it comes to handling corners, the Figo feels like a bigger car than what it is and exhibits great control and poise. The Swift’s steering wheel is definitely more communicative and the car is more dramatic to hurl around corners, owing to skinnier tyres, but the Figo holds its line much better with its restricted body roll and good grip from its footwear. The steering wheel doesn’t communicate that well with the driver, but you can still point the Figo in a certain line and floor the pedal while still being reasonably sure that it won’t pop a surprise. The Swift on the other hand has a tendency to slide a bit, which, while being exciting for some drivers, isn’t the best thing to happen when you want to be safe. Overall, the Swift still takes the accolades for being a better driver’s car. 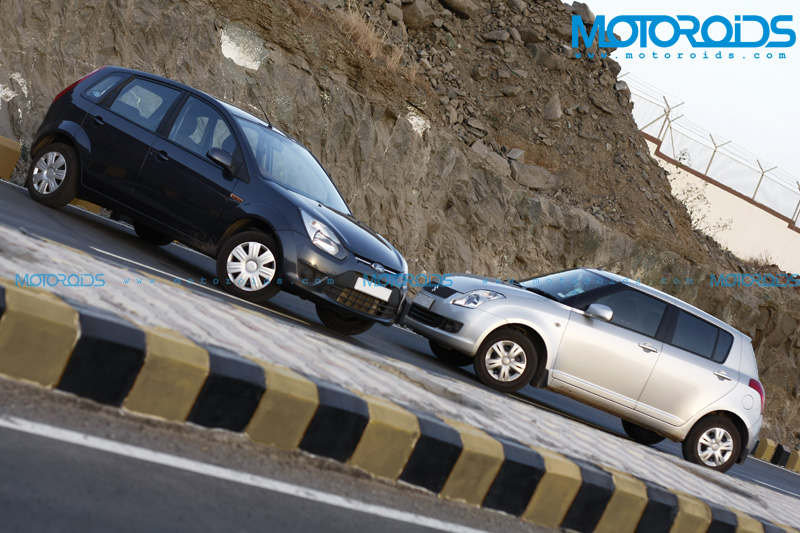 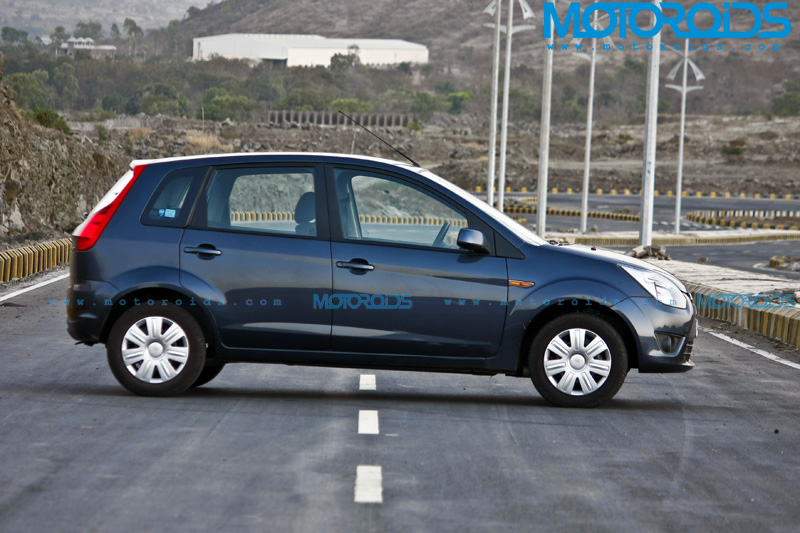 It’s easy to see here that the Figo scores highly over the Swift when it comes to comfort, leg-space, ride quality, and stability. The cabin looks and feels better than the Swift and the extra boot space goes a long way in making sure that the Figo will be able to carry a family in better comfort than its primary nemesis – the Swift.
On the other hand, the Swift scores in terms of fuel efficiency, outright performance, and fun-to-drive factor. Maruti’s sales and service network and low cost of maintenance also come across as a positive.
So if you are a family guy, and comfort is high on your priority list, and if you don’t mind paying a wee bit extra for fuel in lieu of a plusher ride – go for the Figo.

But if a peppy, exciting drive is what you are looking for, with frugality as an added bonus, then go for the Swift – just that your family won’t be as comfortable as it would be in the Figo. 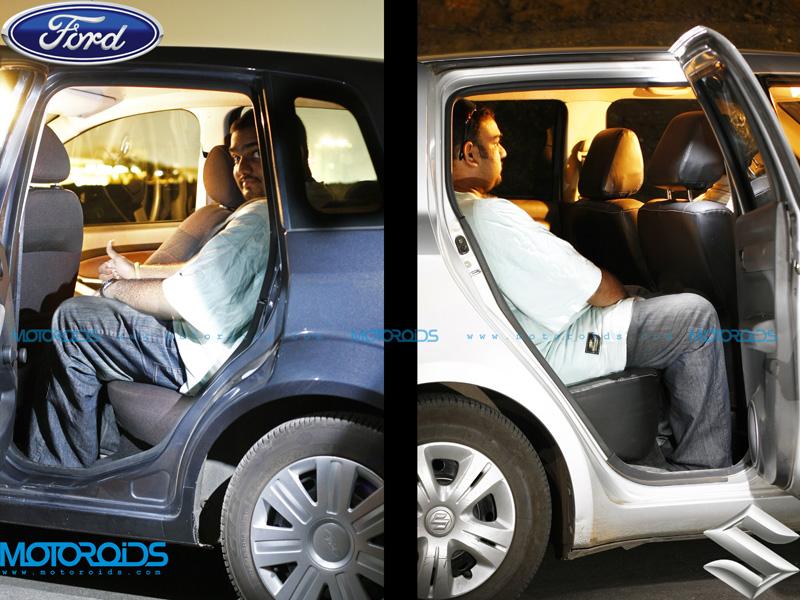 The Figo has much more legspace than the Swift!