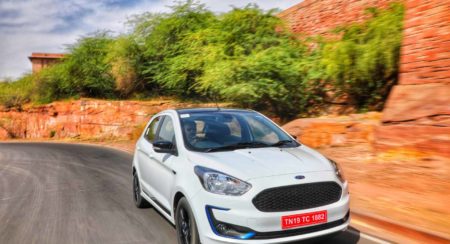 The Ford Figo has been a very popular car among enthusiasts since its launch. In this latest facelifted rendition it gets a lot of new changes both on the inside and outside

The new Figo looks better than ever. In its current guise, it gets a new cool looking bumper design with L-shaped fog lamp housings, a new cellular grill which is finished in gloss black on the top titanium blu trim and gets a chrome treatment on the lower trims. The car gets new 15-inch black alloy wheels on the titanium+ variant and overall, retains its well-proportioned stance with the Aston Martin-like fascia.

The new Ford Figo gets a very sporty all-black cabin. The car gets a new floating style 7-inch touch screen infotainment system which isn't Android Auto or CarPlay compliant but gets in-built navigation and is smooth in operation.

Other mentionable features include keyless entry, push-button start, steering mounted controls, and Fully-automatic air-conditioning. At 257-litres, boot space is adequate and the cabin is comfortable for 4 adults although taller passengers might find headroom lacking a little at the back. The Figo now gets a height adjustable driver's seat too and the seats on their own are pretty comfortable and supportive. The air-conditioner works brilliantly and helps to cool the cabin down in quick time, even during peak summer.

The Ford Figo comes with dual front airbags, ABS with EBD and Brake Assist, rear parking sensors, keyless entry and driver seatbelt reminder as standard on all models. In addition to that, the top trim's feature list is a little more elaborate as it comes rear parking camera, rain sensing wiper, and Ford MyKey among others. The top-end titanium blu variant also comes with side and curtain airbags, taking the total count to 6.

The Ford Figo comes with 3 engine offerings. Diesel variants are powered by a 1.5-litre TDCi 4-cylinder engine which is good for 100ps at 3,750rpm and 215nm of torque between 1,750rpm to 3,250rpm. An efficient engine, it is rated for 24.4 km/l and scores really high on driveability and offers punchy performance when asked.

Petrol variants are propelled by Ford's new 1.2-litre, Dragon series, 3-cylinder, naturally aspirated motor which churns out 96PS at 6500rpm and 120Nm at 4250rpm. The 6-speed automatic variant is only offered with a 1497cc 3 cylinder engine which is good for 123ps at 6500rpm and 150nm at 4500rpm making it the most powerful engine in its class. The 1.2-litre engine is peppy and offers fruity performance, right till its redline. For a 3-cylinder architecture, it performs in a rather smooth manner too. In terms of fuel economy, it is rated for 19.0 km/l.