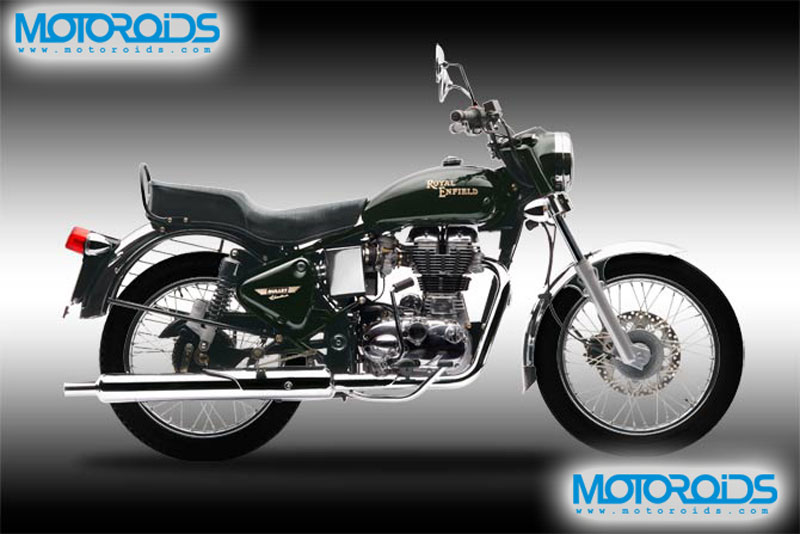 Of late I discovered that I have developed a liking for Royal Enfields. Having ridden one in the past meant that the acquaintance wasn’t new. But somehow the liking was. I have some friends who keep on saying that nothing can create the magic a Royal Enfield creates. And I wanted a first hand experience of the thumper. So I decided to take the newly launched Electra Twinspark for a spin. A  few phone calls to the Ed and a friend was all it took to get myself the lovely looking RE. 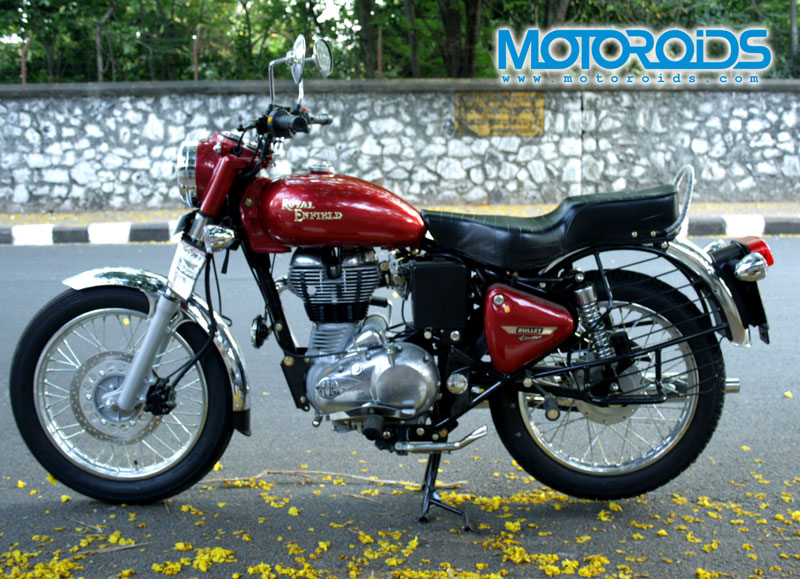 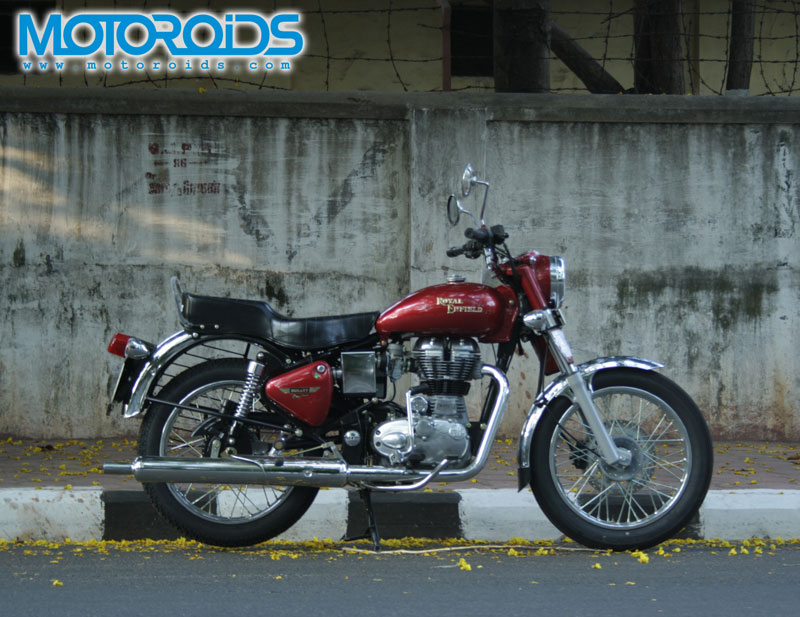 I call this love at first sight. The moment I saw the bike I fell in love with her. The classic RE look is something to die for, and the new Electra does the right thing by not messing with convention.  My friends weren’t wrong, the magic was working. I couldn’t resist myself and went ahead to take a closer look. This is the only bike I have seen in my whole life on which visible welds look good. The paint quality has improved over the earlier Res and look great with a consistent coat and nice gloss. True to the RE punchline, the bike indeed seems to be made like a gun. But to check whether it really goes like a Bullet meant a test drive. So I took the keys, and effortlessly pushed the electric starter button – something that the old-school Buleteers still don’t like doing. The bike came to life in a couple of attempts, not bad for a Bullet I say, gone are the days when you required a macho built to bring these contraptions to life, a few slight dabs of the right thumb is all you need now. The new bike comes with a multi focal reflector headlamp, gas filled shock absorbers and with the option of a front disc brake. 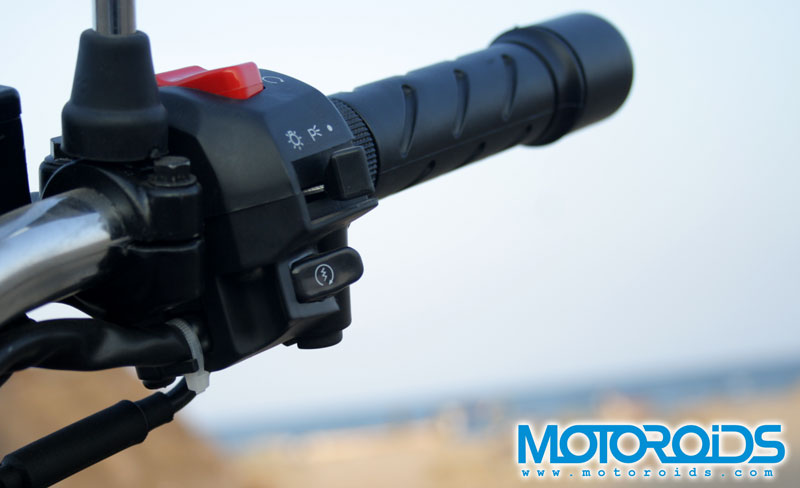 Some say that the new Electra seems to have lost some of its charisma, with the introduction of the Unit Construction Engine. The sentiment may be agreed upon by the old school Buleteers even to date, but the new engine is a huge step nevertheless. The Twinspark engine in the Electra produces a peak power of 19.8bhp at a lowly 5250 rpm. The older engine (made of cast iron) was heavy and suffered from power losses in transmission. These problems have been rectified in the new engine. But the bike loses its intimidating exhaust note in the bargain. The sound of the new machine isn’t as enticing as its predecessor. The new  exhaust note is perfect for a person like me who is new to the thumpers and doesn’t want his parents to know about his late night outings. And there are a few after market exhaust options available too which means that if I want the THUMP, I can get that too. 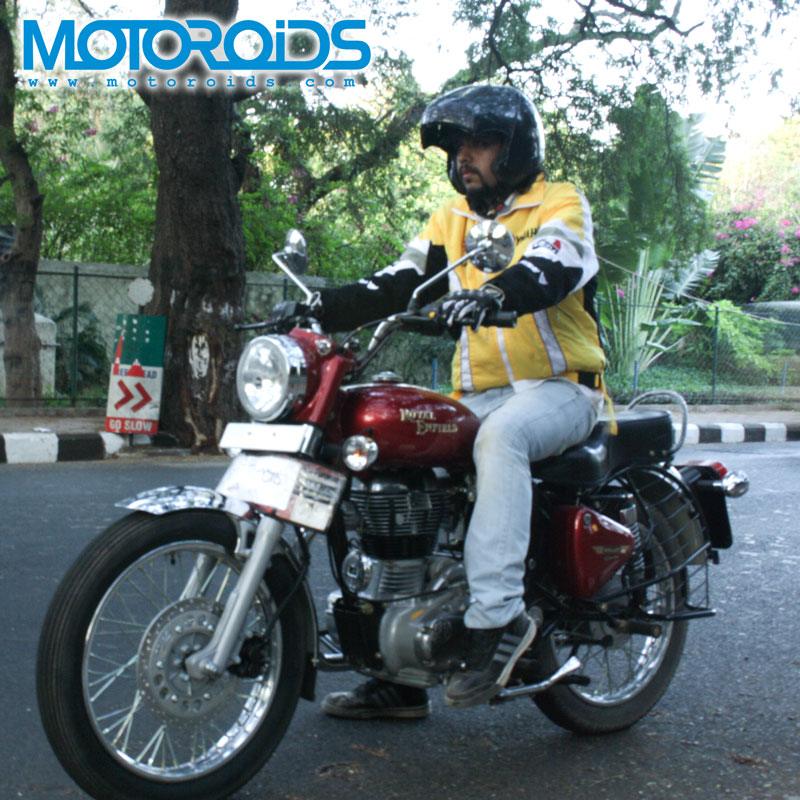 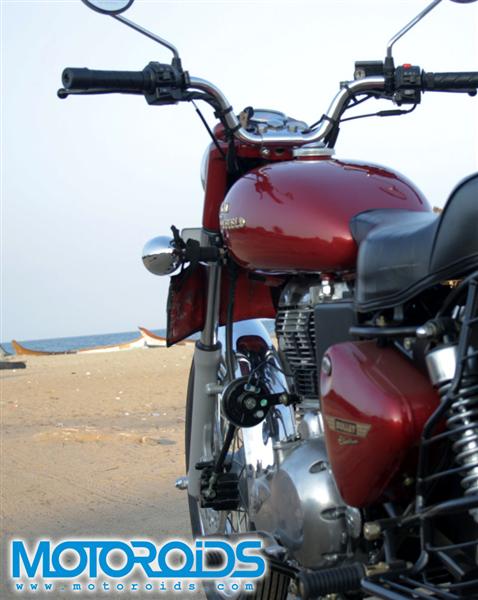 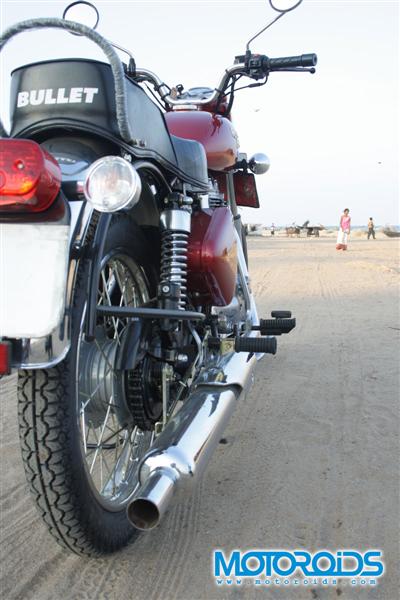 I did have some time constraints while testing the new bike, which meant that I had to get to the job of evaluating the bike as soon as possible. A few noisy attempts later came a goosebump inducing deep rumble. The revs build up but unlike my 150cc sporty commuter,this one is relaxed till I wring the accelerator cable.The first thing that came to my mind was Muscle Car. This bike is like a two-wheeled incarnation of pony cars from 1960s featuring humungous engines and had heavy handling. I engaged the first cog on the 5speed ‘box, and the bike took off with great reassurance, no wheelies here though, even if Bullet newbies like me attempt one. A long straight and a 350cc Bullet engine means bliss – I must say, the experience in a straight line on a Bullet is unmatched. There are loads of torque units emanating from that huge engine, 28Nms to be more precise, so when I wrung the throttle a little bit, the bike lunged ahead with great force. The comfy seat meant my backaches wasn’t something I had to worry about anymore. The comfy riding position and the seat compliment the bike’s mile munching character. 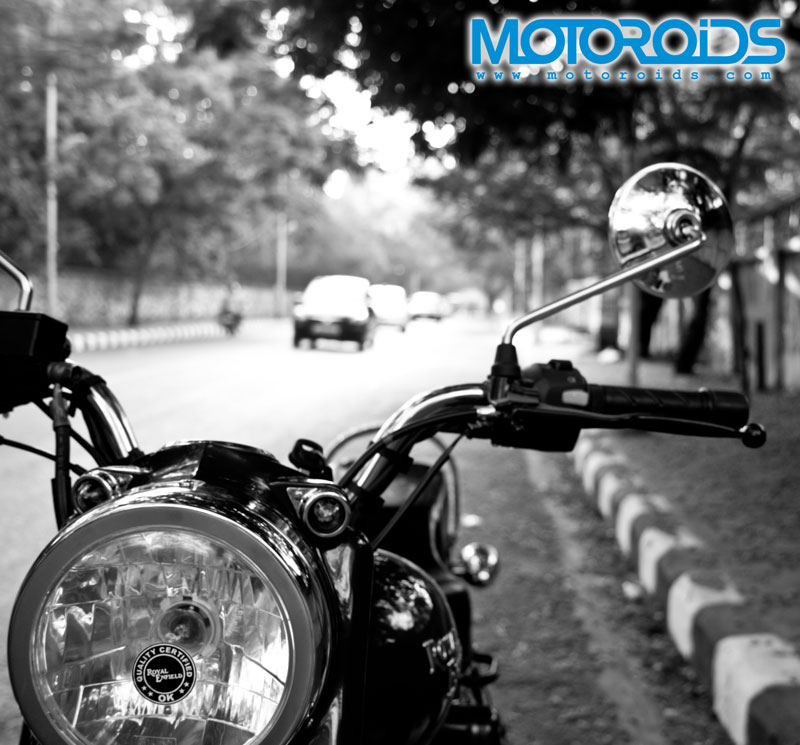 But now the Rossi wannabe inside me was urging me to attack the next number of corners the way I do on my regular bike. And I did listen to my inner voice. And that’s where Bullets typically disappoint. The new Electra feels lazy around the corners, especially the sharp ones. You need to have some meat on you if you want to control this baby with confidence around corners. Having said that, the Bullet handles nicely around long sweeping corners, but if you expect it to swallow sharp left-right chicanes, then you’ve probably bought the wrong machine. But then, this is the way they are made to be. Bullets aren’t supposed to go sideways, they are supposed to go straight from the barrel and hit the target. 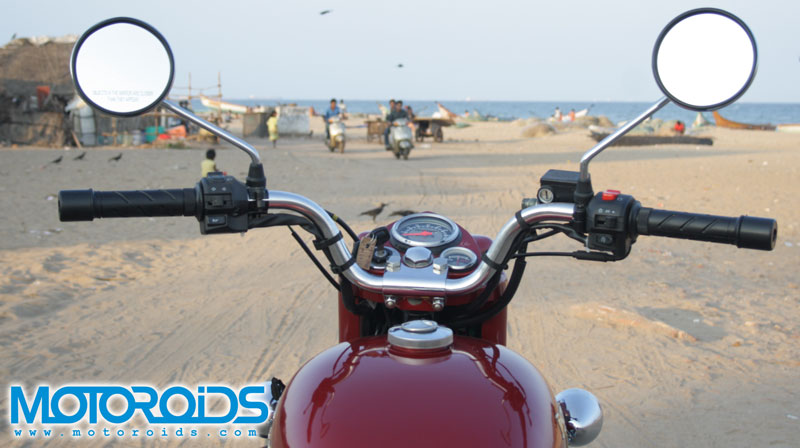 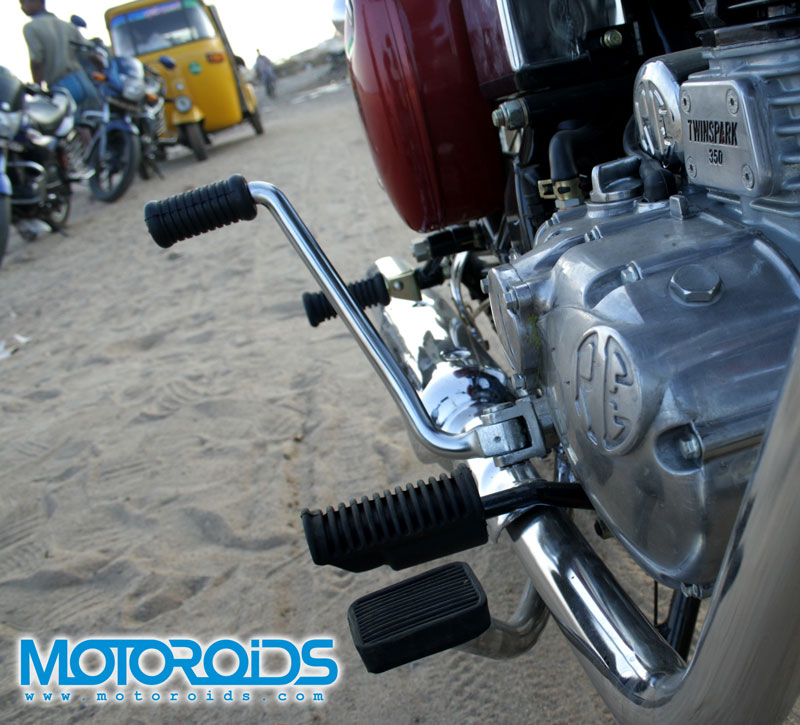 Royal Enfield claims to have an avg fuel consumption of 51 kmpl,which is quite decent for a bike of this size. Having the bike with us for a short period, we were not able to test the fuel efficiency, but we believe that being a more modern unit, this one should return better fuel efficiency. 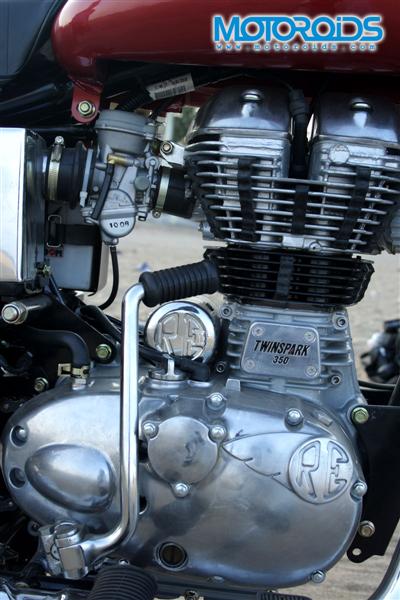 Bullets dont have any competetion now,there was none and there won’t be any. But now they are geared up to give other manufacturers sleepless nights.Because with the killer price of 88k for the kick start version and 93k for the E.S the Electra falls in a price bracket where the prospective buyers are either those who are upgrading or the ones buying a new bike but not their first one. This means that the Electra could be considered as an option,which means more success for the brand which in turn means more bookings. But here lies the problem,the plant at Chennai produces around 4000 bikes a month. The booking period for RE Classic is 6 months and 4 months for the TBTS. If RE India can somehow increase their production capacity,then the day isn’t far when our traffic lights will have more thumps than those produced by your 20″subs.And I am in the queue.Better start saving! 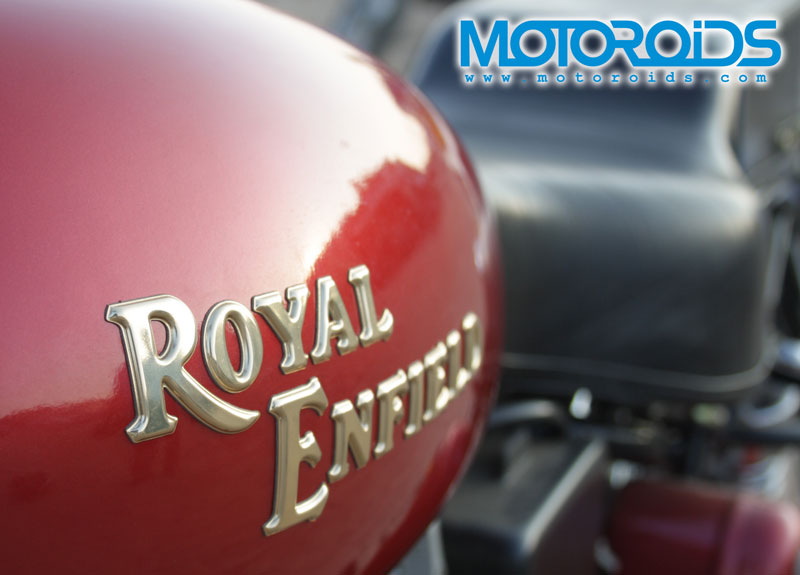 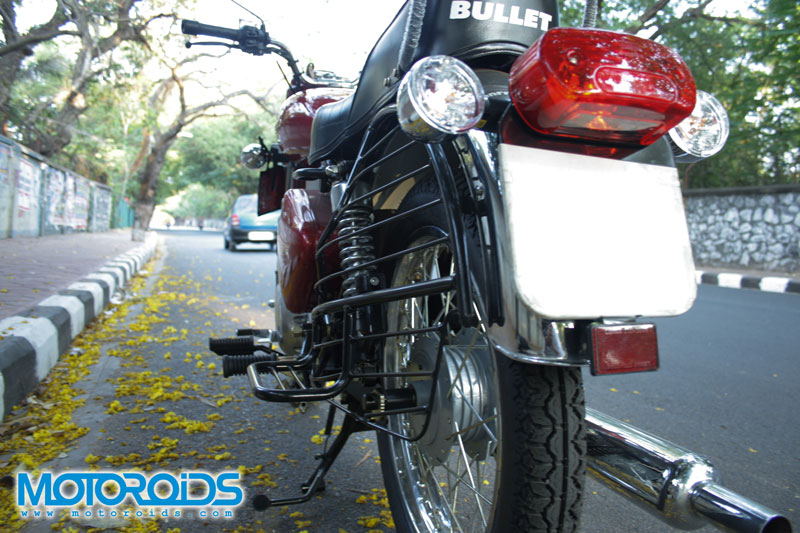