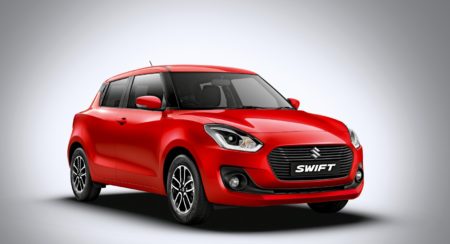 The Swift is one of the most affordable and premium hatchbacks in Maruti Suzuki's, lineup starting at an introductory price of Rs 4.99 lakh to Rs 9.76 lakh (ex-showroom, Delhi). The new-generation Swift carries a new design language, although, it still retains quite a lot of its iconic silhouette.

Maruti Suzuki has made subtle upgrades to the Swift's design, which are evolutionary and carry forward the original design to keep it current. The Swift now gets a sportier looking grill up front, LED projector headlamps with DRLs and fog lamps which are placed in a blacked out insert. The vehicle sits on dual-tone, sporty looking alloy wheels, it gets electronically adjustable ORVMs with integrated side indicators, and body coloured door handles. At the rear, the all-new Swift gets sporty looking LED combination lamps, a shark-fin antenna, reverse parking camera and sensors. In terms of dimensions, the Maruti Suzuki Swift is 3840 mm long, 1735 mm wide, 1530 mm in height and it has 2450 mm of wheelbase.

Based on Maruti Suzuki's new HEARTECT platform which also underpins the Baleno, the Swift is now lighter than the model it replaces. Since it also has a compact sedan version which sits along side in the form of the hot-selling Dzire, they both look identical, except for the rear, where the Dzire gets a proper boot for its 3-box credentials.

On the inside, the all-new Swift features a blacked out cabin with grey-silver accents on the dashboard. Entertainment needs are taken care by a touchscreen infotainment system which is Apple Car Play and Android Auto compatible. Accessing various functions of the screen is easy, as the driver can easily jog through its various functions with the help of steering mounted controls placed on a new flat-bottom wheel.

The new-generation Swift also gets modern controls for its automatic air-conditioning system, where information about the system is displayed on within the rotary dials. The hatchback gets practical storage spaces and an adequate amount of legroom and headroom. A new, twin-pod instrument cluster stays true to the original, where the speedometer needle still rests at the 6'o clock position, a'la the Hayabusa. Other creature comforts include power windows, adjustable seat headrest, push button start, a new multi-information display screen, seat height adjuster and headlamp on reminder

Based on a new HEARTECT platform, the Maruti Suzuki Swift gets  Driver and passenger airbags, ABS with EBD, and seatbelt warning as standard. The top-variant features Reverse parking sensors and reverse parking camera, a security alarm system and the fascia has been designed to minimise injury during an unlikely event where the car hits a pedestrian.

The new-generation Maruti Suzuki Swift is powered by a 1.2-litre petrol engine which is rated for 82 ps of power and 113 Nm of peak torque. The motor can be paired either with a 5-speed manual or Maruti's AGS  transmission, which is essentially an AMT. Diesel variants are still powered by a Fiat-sourced 1.3-litre engine which churns out 74 ps of power and 190 Nm of torque. The diesel mill too, can be opted with a 5-speed manual or Marutis's clutchless AGS. Both the engines are fuel-efficient and are rated for 22 Kmpl (petrol) and 28.4 Kmpl (diesel).

The petrol engine is a peppy, naturally-aspirated motor, and is one of the most accomplished 1.2-litre motors out there. It revs happily till its redline, is also efficient, and has power spread throughout the rev range. On the other hand, the diesel engine is extremely efficient, feels punchy to drive and such is its popularity, it's not for nothing, this motor is also called the 'National Engine'.