You know the Tata Harrier‘s Kryotec Engine, now let’s rev it up for a test – these are the opening lines of the latest Video Tata has uploaded on its YouTube channel. For the last couple of days, Tata has been teasing us with bits of information of their upcoming SUV. The latest teaser showcases the SUV, wrapped in camouflage, being tested on the Natrax test track. The car underwent two tests at this facility which shows Tata’s commitment to building a good handling car. The Natrax test track happens to be Asia’s largest testing ground and is specialised for testing vehicle dynamics. 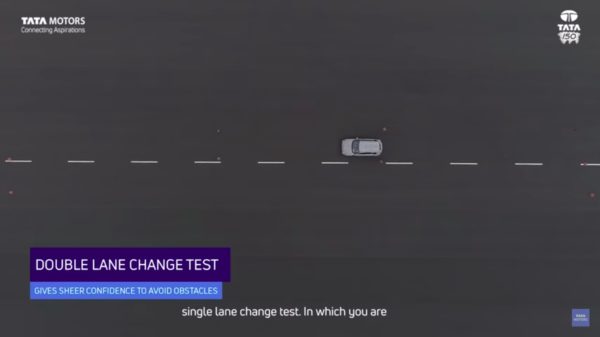 Two main tests of the SUV were conducted, a double lane changed test and a Fishhook test. The double lane change test represents a scenario when you have to avoid sudden obstacles, not once but twice. This is a very common scenario on our Indian roads and it is good to know the Harrier can handle it. The fishhook test is done to check the stability of the vehicle after panic manoeuvres. The car’s ability to maintain composure and not lose grip or topple over. Tata looks determined to take over from its competitors, the Hyundai Creta and the Jeep Compass. 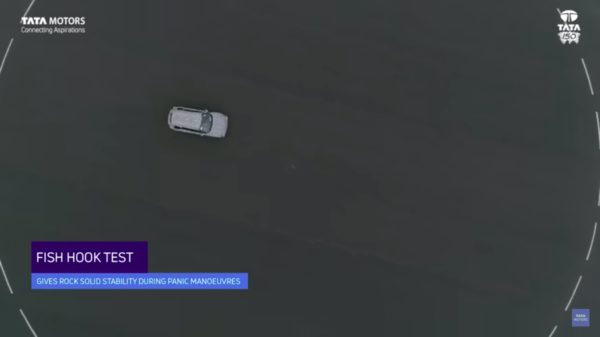 Also Read: VIDEO: A Tata Hexa Driving Without a Driver

The Tata Harrier SUV was first showcased at the Delhi Auto Expo earlier this year as the H5X concept. Time and again, Tata has told us it will look very similar to the concept car. The SUV will use a Kryotec engine which is rumoured to make 140 hp and 300 Nm of torque. The engine will come mated to a six-speed manual transmission or a Hyundai sourced six-speed automatic. The SUV will be out early next year in 2019 and bookings are now open. While the prices are not out yet, it is rumoured to have an on-road price of between INR 16,00,000 to INR 21,00,000.