Home News The Tiago NRG, Tata’s Answer to the Freestyle; Launch on 12 September

The Tata Tiago is a nice hatchback offered by the Indian manufacturer. Selling anywhere between 6000 to 8000 units every month in 2018, the car is doing good in the Indian market space. The new trend of manufacturers offering crossover variants of their hatchback, Tata too is going to give the Tiago a similar treatment. To be called the Tiago NRG, it is termed as an “Urban Toughroader” by the company. 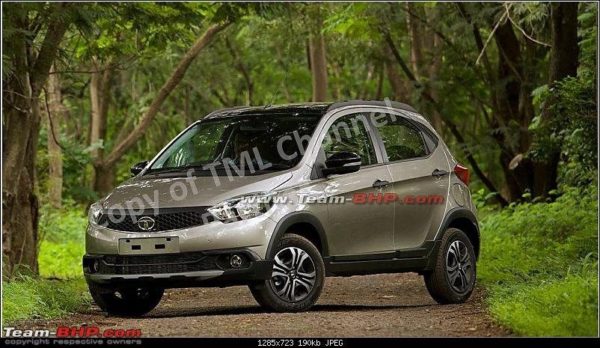 Mechanically, the cross over gets no changes. The Revotron 1.2-litre 3-cylinder petrol unit makes 84 BHP and 114 Nm of torque. The Revotorq 1.0-litre, 3-cylinder diesel puts out 69 BHP and 140 Nm torque. Both engines would come mated to a 5 speed manual gearbox. The Tiago NRG will miss out on the AMT option. Safety aids like ABS with EBD, dual airbags and Cornering Stability Control would be offered as standard across all trim levels. 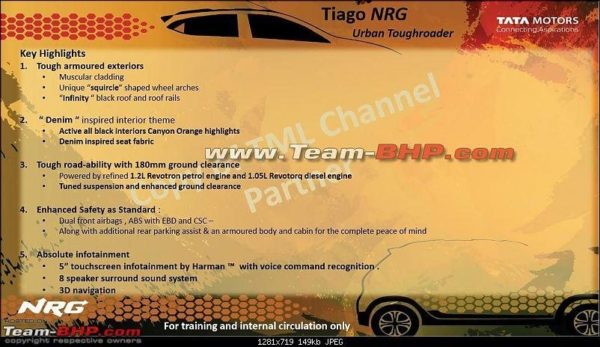 The changes in the exterior are quite massive. The car is raised giving it a ground clearance of 180 mm compared to 170 mm in the Tiago. The exterior get a black cladding all across the car giving it an aggressive appearance. The new body kit will also add to the overall length of the car but the wheel base remains the same. The front gets smoked out headlamps as standard, the side gets 14 inch 4 spoke dual-tone alloy wheels. The rear tail gate gets a black trim piece running across and some parts like the grill, rear view mirrors and roof have been blacked out. 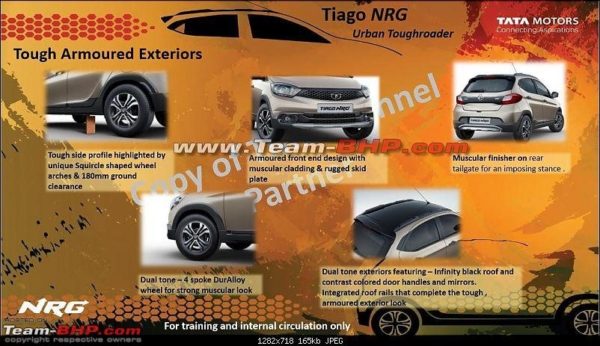 Interior of the car is very similar to that of the Tiago. It features a 5 inch touchscreen instrument panel connected to an eight speaker Harman music system. The seats get new denim inspired upholstery and orange accents. The car also gets a cooled glove box, controls on the steering wheel, Bluetooth connectivity, height adjustable driver seat and electric folding mirrors to name a few. 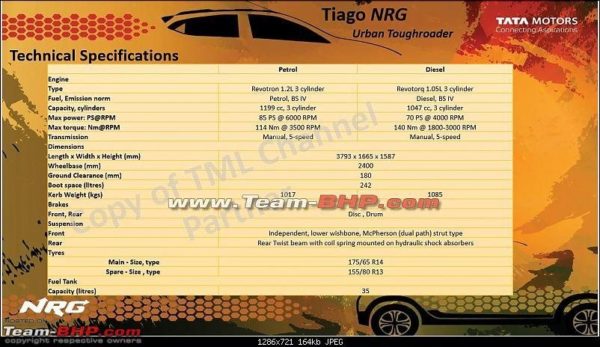 Also Read: Spied Yet Again: Tata Harrier On The Racetrack And With Sporty Seats

The car will be launched on 12 September this year. There is no news on the pricing yet but expect to be priced at a more premium than the equivalent Tiago model. The NRG variant will also get 3 new dual tone colour schemes, Malabar Silver, Canyon Orange and Fuji White. It will go against the Ford Freestyle and the Maruti Suzuki CelarioX. 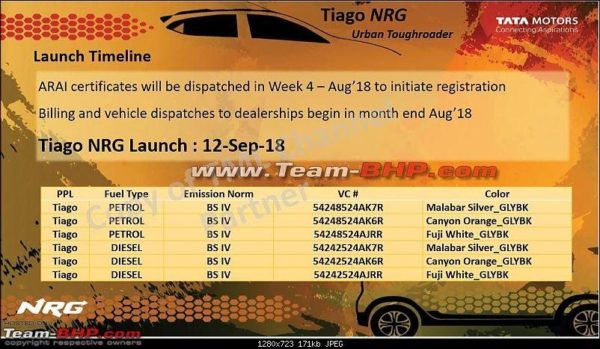