While the Skoda Kodiaq is en-route to India, test mules of the SUV continue to be tested in the country. New spy images shared on the web reveal another completely uncamouflaged unit of the Kodiaq which also includes details of the interiors. 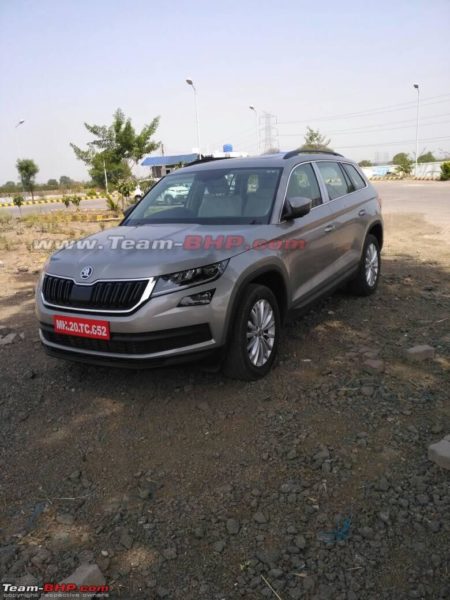 As seen in the spy images, the interiors of the Kodiaq test-mule features a three spoke steering wheel with integrated controls, eight inch touchscreen infotainment system, vertically oriented HVAC vents on either side of the centre console and automatic transmission. Also on offer is a wood like trim on the dashboard. This unit is likely to be an eight speed DSG gearbox. It is also believed that the model is a 4X4 variant.

Also read: Škoda Produces One Million Superbs And 250,000 Of The Third Generation

Up-front, the Kodiaq features the signature Skoda grille with vertical slats, LED headlamps and high positioned fog lamps. The side profile of the Kodiaq receives alloy wheels, roof rails, plastic cladding on the squared wheel arches and chrome finished B-pillar and C-pillar. At the rear, the model comes equipped with wrap around tail lights, integrated spoiler and a dual tone bumper. 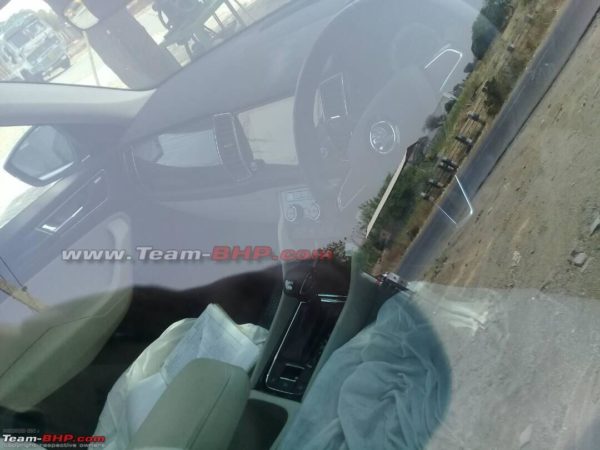 Skoda has not revealed the engine options although it is believed that the Kodiaq will be powered by a range of 2.0-litre turbocharged petrol and diesel engines. The company is also likely to offer a six speed manual transmission apart from the eight speed DSG automatic transmission as mentioned earlier. Once launched in India, the Skoda Kodiaq will rival the Ford Endeavour, Toyota Fortuner and the Chevrolet Trailblazer.

Following is an image gallery of the Skoda Kodiaq spied testing (click to expand):