Mahindra and Mahindra has been working on a number of new products such as the KUV100 facelift, the U321 MPV (Innova Crysta rival) and an extended wheelbase version or LWB version of the TUV300. The Indian automobile manufacturer has remained tight lipped when it comes to details regarding these products. 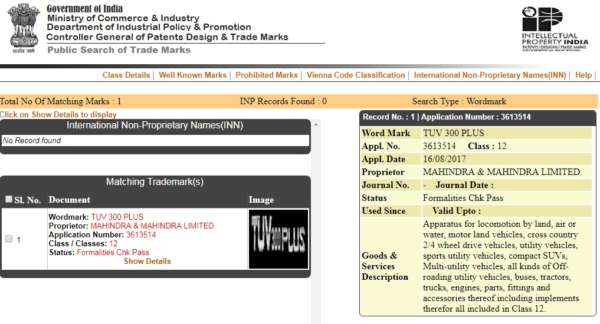 While earlier reports said that the TUV300 LWB could be called the TUV500, it is now learnt that the model could be christened as the TUV300 Plus. A search on the web has revealed that the company has trademarked the name ‘TUV300 Plus’ with the Controller General of Patents Design & Trademarks owned by Ministry of Commerce & Industry, Government of India. Test-mules of the vehicle have also been spotted on numerous occasions. Seen here are the spy images of the TUV300 LWB shared with us by a Motoroids reader.

Recent spy images of the TUV300 Plus reveal that the model is likely to carry forward the same design with a now longer wheelbase. The company, although unconfirmed, is likely to offer a front facing third row bench instead of the side facing seats currently available on its sub 4-metre sibling. 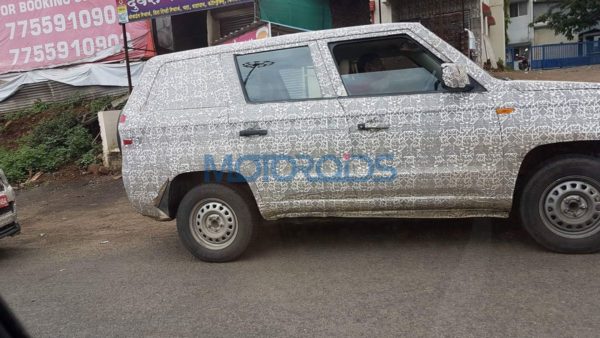 Engine specifications of the Mahindra TUV300 Plus remain scarce at the moment although the company could employ a 2.0-litre mHawk diesel engine as seen on the Scorpio and the Mahindra XUV500 in the Delhi-NCR region. This motor, in its current state of tune, produces 140 hp at 3750 rpm and 320 Nm of torque between 1600-2800 rpm. This engine could come paired to a six speed manual transmission. More details are likely to surface soon. Stay tuned for updates.