Mahindra’s upcoming MPV, codenamed U321 has been caught testing several times. After a string of not so successful shots at the MPV segment with the likes of the Xylo and the smaller Quanto, Mahindra seems to be cooking up something special this time. The new seven-seater MPV is expected to boast a more refined design and a lot more features than its predecessors.

So while we have seen quite a few images of the new MPV wrapped in trademark camouflage, this time around, there’s something special we have at hand. The new MPV has been shot testing alongside the definitive MPV in the segment – Toyota Innova, in both its old and new versions. The images shot from the rear, and published originally on Anythingonwheels give us a good sense of the car’s height and width vis-a-vis its Japanese counterpart.

Comparing the images, the new Mahindra MPV looks similar in size, if not bigger than the older Innova, and only a smidgen smaller than the new Innova Crysta. Individual images of the new MPV taken from the side also suggest a generous wheelbase which should make for tons of space inside. The seven seater MPV will be positioned on the premium side and will boast three front facing rows for the occupants along with a whole array of creature comforts, amenities and electronics. 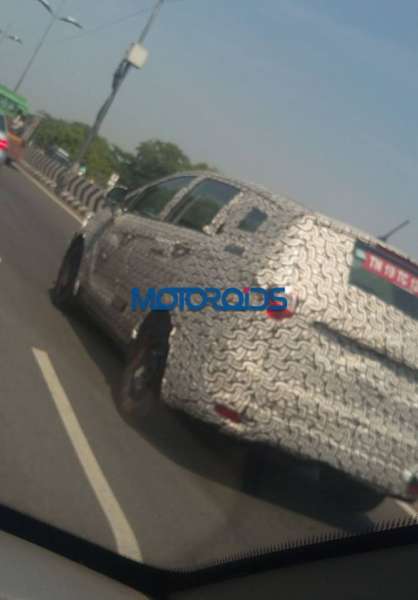 Strong upswept character lines on the sides, and horizontal accents at the rear along with vertically stacked tail-lamps promise a well sculpted, smartly designed body under that misleading camouflage. The new Mahindra MPV will be a far cry from the Xylo and Quanto, which were worthy of being termed a study in disproportionate design.

While the specs for the new 1.6 diesel are far from being out, it would be safe to assume that it will boast a little less than 100 horses with under 300Nm of torque. Transmission duties will be taken care of by a six speed manual. We don’t think there would be a petrol powered offering for this specific model. 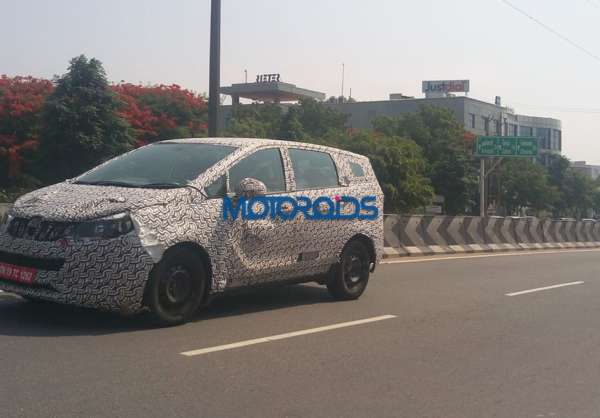 The Mahindra MPV has been shot exclusively by Motoroids on earlier occasions, with a very good view of its fascia. This one will get the Mahindra grille with new, classier-looking treatment meted out to the vertical grille elements. The headlamps feature projector lamps, which is another hint at the premium positioning of the car. A massive front bumper with minimum creases and a wide central air dam is another welcome change over the rather complicated faces of some other vehicles from the Indian stable.

There obviously is a gaping hole in the MPV segment where the Innova is lapping up all the sales despite being on the expensive side. If Mahindra could tick the right boxes, the new MPV may become the catalyst of growth for the Indian UV maker for the next few years. Expect the new MPV to be priced around the XUV variant-to-varint with launch in the current financial year.

We’ll keep you posted about the new MPV from time to time. Stay tuned, and in the meantime, do share with us your thoughts on the few things that Mahindra could do to ensure that this one emerges successful unlike earlier models all of which have failed to challenge the all-conquering Innova