For a brand new car brand and its first car going on sale in one of the toughest markets in the World, the Kia Seltos has made a dream start. As a product, it has it all covered, ticking most checkboxes of the Indian car buyer. However, as it is with most new beginnings, there have been glitches which are being reported by owners and also those waiting in queue to bring home their new car. 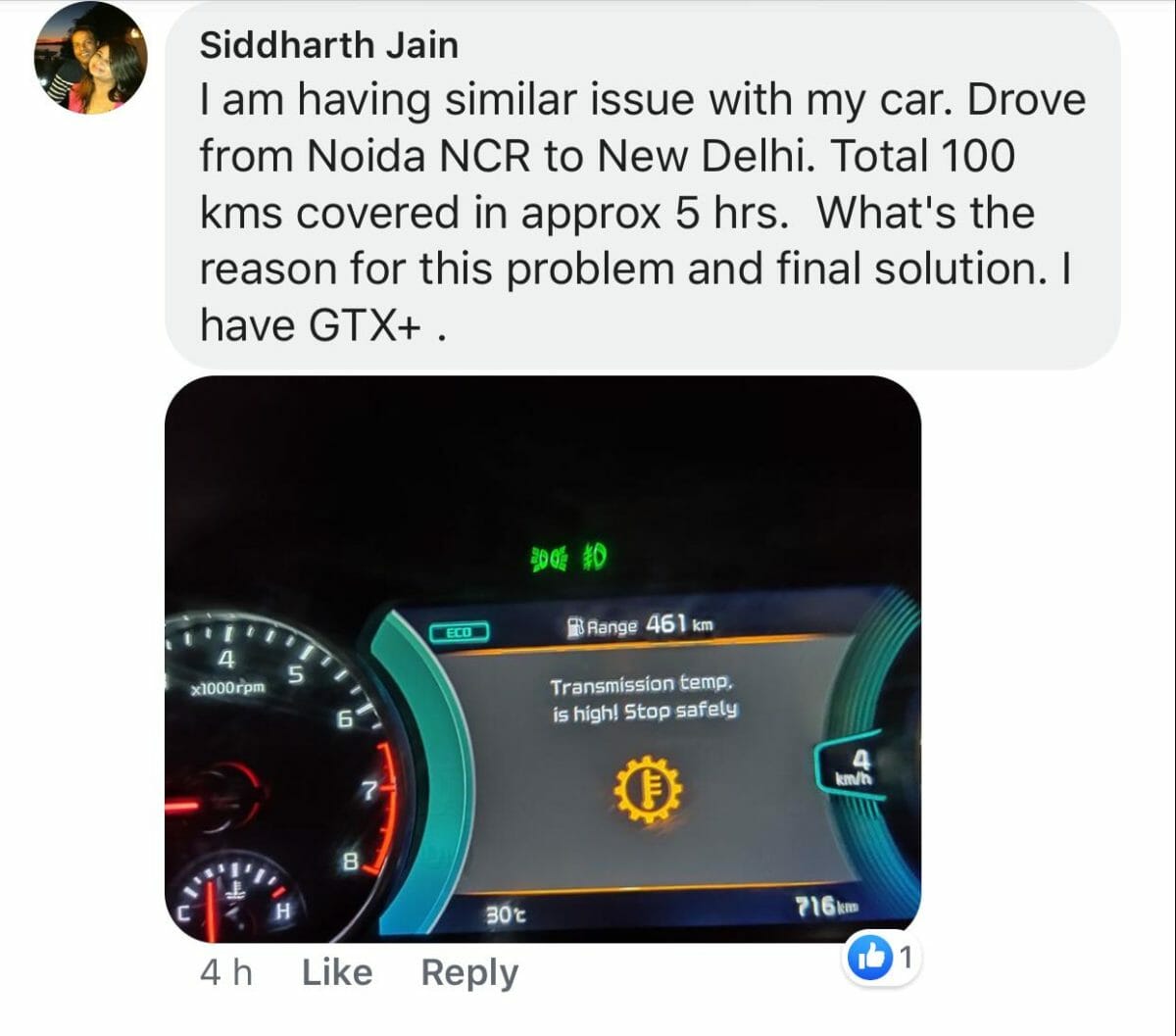 The 7-speed dual-clutch automatic transmission which has been paired with the 1.4-litre turbo petrol motor is of the ‘Dry’ type. Given our weather and traffic conditions, many owners have been reporting of a gearbox overheating message on the MID. The remedy to this suggested by Kia Motors’ service advisors has been to shift the lever into ‘N’ or ‘P’ when the car is stationary while negotiating choc-a-bloc traffic, which is a practice followed by many who drive cars with such gearboxes. Although technologically superior, dual-clutch transmissions are known to throw up issues and do require precautions to be taken while driving. 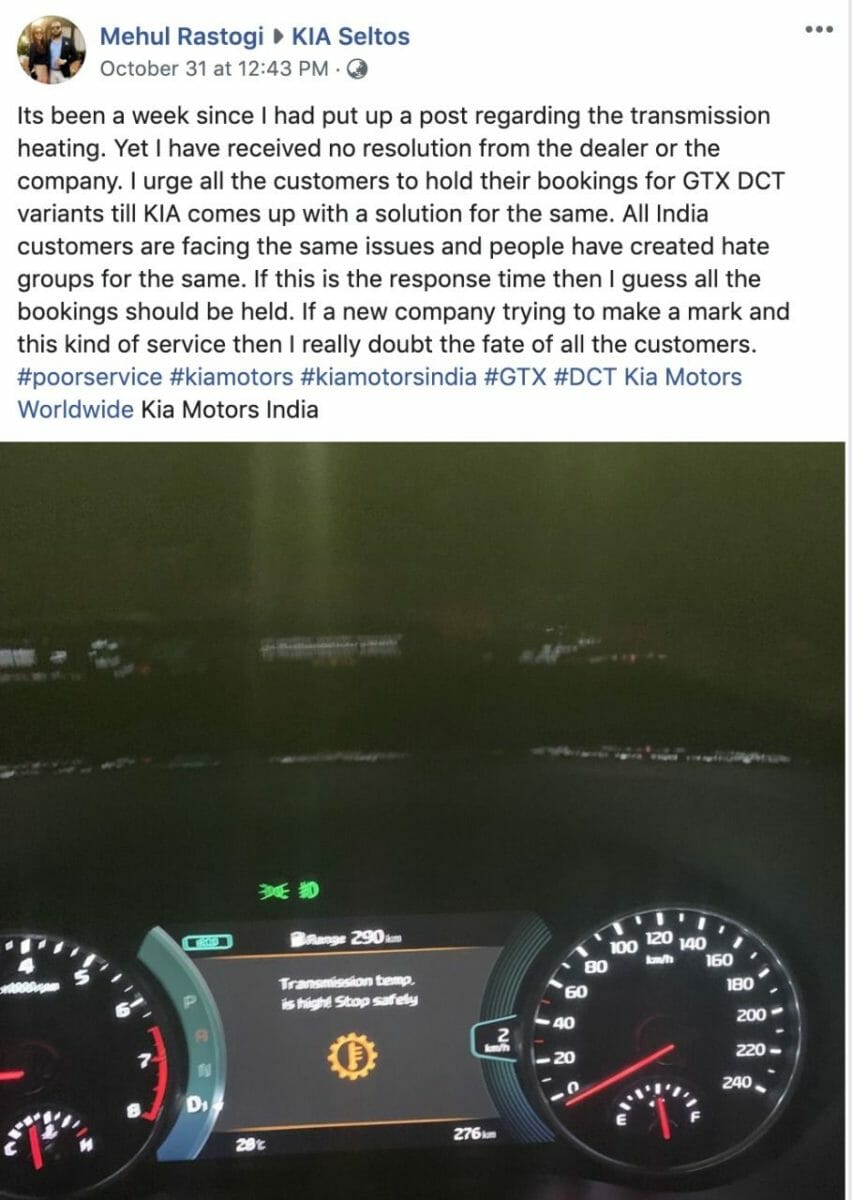 Among people known to us who drive cars with a dual-clutch transmission, we know some who have faced issues, while some have nothing to complain and are enjoying every bit of the experience. On Kia Motors’ part, this issue should’ve been noticed while they were testing their cars prior to launch and buyers who have adopted this technology for the first time should’ve been informed about precautionary steps to avoid this situation. Some information in the owner’s manual about the possibility of such a thing happening could’ve easily avoided this problem. 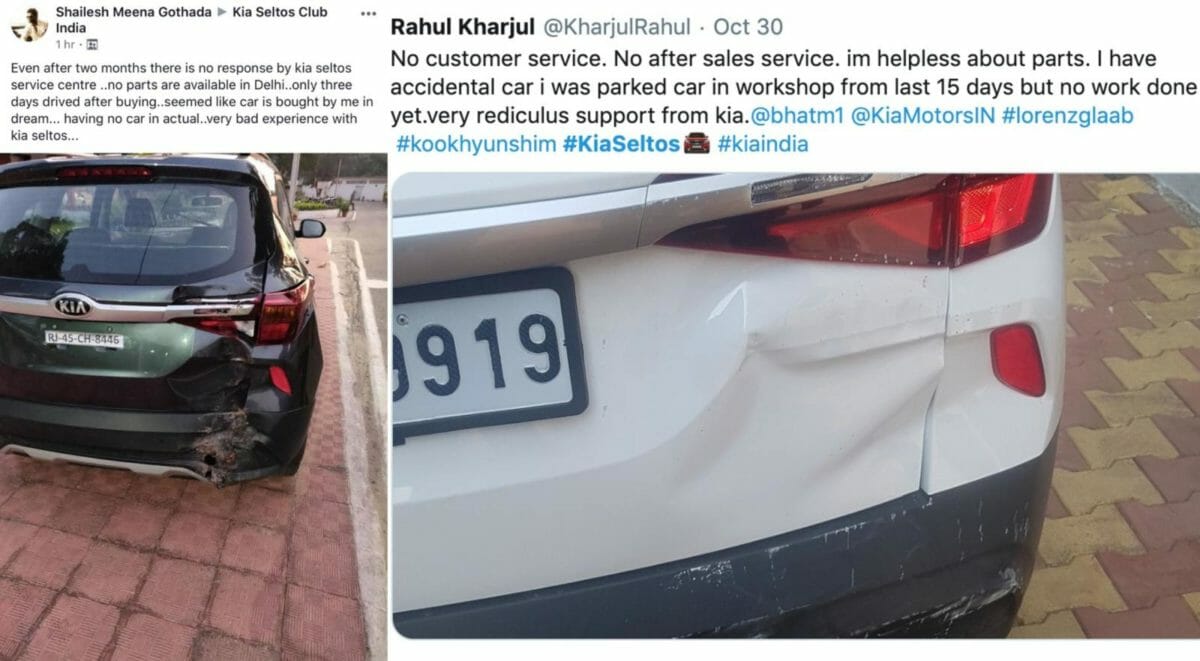 Some Kia Seltos’ have been a part of an unfortunate crash and unavailability of spares and components have meant that cars have been eating dust at dealerships for almost 2 months! For being among the Top 10 carmakers in the World, Kia Motors should’ve ensured proper availability of spares, the day they launched their cars. We hope it’s the initial phase where it takes some time to iron things out. However, first impressions in this area do count if we consider carmakers who entered India in the past with great products and failed to impress in the after-sales department. While some are still trying hard to change that image, some have packed their bags and left.

There are people who have booked their cars in the months of July, August 2019 and are yet to get their cars. Such an experience leaves a bad taste and although it’s the dealerships who have been making a mess, the carmaker should’ve refined the allocation and delivery process by now at least, since it has been some time that the car has been launched.

Attached commitment of ASM KIA, now he is not responding, i have tried to contact him many times. No response on whatsapp and trying to pass the ball. Kia, Please fulfill your commitment. pic.twitter.com/3W1z9Ti6V2

Also, the attitude of their customer service department and the faces at their brick-n-mortar touchpoints hasn’t been professional in many cases. One gentleman in Mumbai was sold a car with fungal growth under the carpet and rust on the disc brakes. In addition to these instances, there are several people out there who are disappointed with the way they have been treated in person, or over the phone by Kia’s representatives.

Since the Kia Seltos is the only diesel-powered car in its segment to be BS-VI compliant, even before the new norms are implemented, it has to run of BS4 diesel. Some owners have been reporting that the engine check light has been coming on frequently within the first couple thousand kilometres of driving. After performing tests at the service centre, it was found that BS4 diesel with high sulphur content was choking the Diesel Particulate Filter and triggering the check engine light. Existing owners will have to live with this until BS6 fuel is introduced at fuel pumps nationwide.

UVO Connectivity Down For 6 Days

A connected car, the Seltos offers Kia’s UVO tech which offers features like Live car tracking, remote operation of certain features, car health status, stolen vehicle tracking, etc. For many owners, this e-sim based service has been down for nearly 6 days. Some problem with the Vodafone-Idea network has resulted in owners not being able to download driving-related data from the servers.

Some owners have been complaining of the infotainment screen freezing repeatedly. It requires the car to be restarted or the system to be reset in order to make it work until it happens again. An owner has reported that the system freezes, every time the car goes over bumps or through potholes. 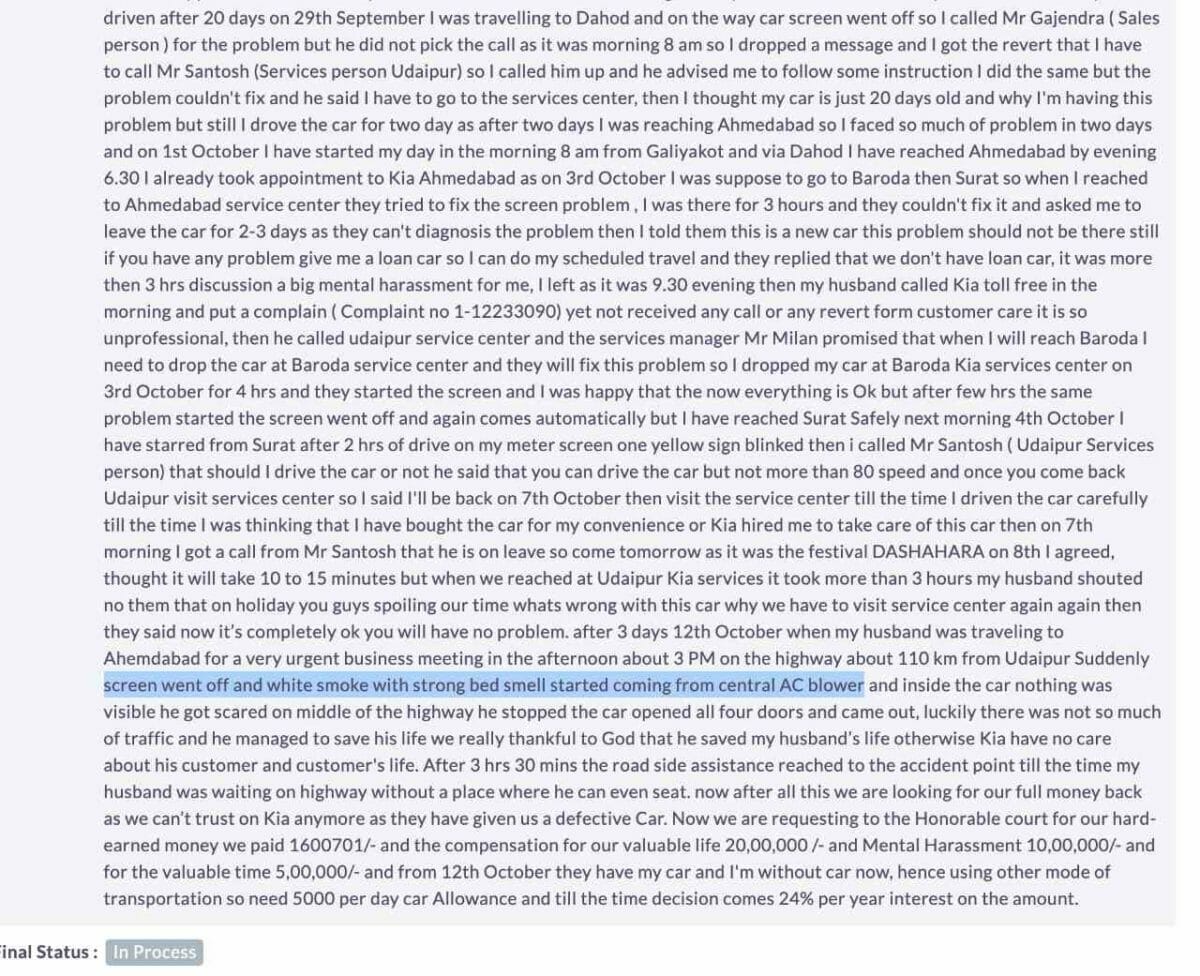 Another owner visited three different service centres for the problem to be fixed by the third, only to reappear again, apparently, with white smoke being blown out of the central AC vents. While some of the problems mentioned here are not new to the automobile industry, the way in which representatives of Kia Motors have been dealing with these customers has been the cause for discord. On the other hand, let’s take market leader Maruti Suzuki for example. A friend of ours got proactive calls from their executives to top-level regional managers, all in one day, just for a single complaint about a problem with the steering system of a Baleno. For a premium brand then, which is new and has gained great traction in a tough market, we hope these issues are addressed by Kia Motors as soon as possible.