The new Hero MotoCorp XPulse 200 in inching closer to its India launch as the Company has released new teaser image of the upcoming motorcycle on its social handles. While the new teaser image does not show the motorcycle, the caption hints towards an ‘Adventure’ and thus the obvious contender is the XPulse 200. The teaser image says, “Let the adventure carry you away.”

Let the adventure carry you away. pic.twitter.com/n6mlk1UTmh

Of course, most of the details are already out and we’re just awaiting the final price of the product. Previously, Hero MotoCorp had announced that it aims to launch the motorcycle below the INR 1 lakh (ex-showroom) mark along with the new Xtreme 200R. The new Hero Xtreme 200R, as reported earlier, was launched in India at competitive prices. In an official press release, Hero MotoCorp had announced that it will launch four new products — Xtreme 200R, XPulse, Duet 125 and Maestro Edge 125 — in the coming months. 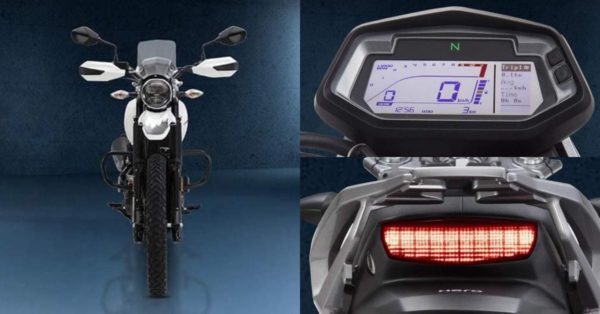 A brief chat with a Hero MotoCorp representative at the 2018 Auto Expo in Delhi revealed that the motorcycle would be launched in August 2018.

The official photographs of the production spec Hero MotoCorp XPulse 200 surfaced on the internet, revealing finer details about the upcoming motorcycle. Upfront, the motorcycle uses a spherical full LED headlight, a tall-set front fender, a windscreen, dual-tone knuckle guards, and a large front wheel. Mechanically, the XPulse uses a 200cc fuel injected, single-cylinder, air-cooled engine which is tuned to deliver 18.4 PS of power and 17.1 Nm of torque.

You can also check out a walkaround video of the new Hero MotoCorp XPulse 200 below:

Check out more images of the upcoming new Hero MotoCorp Xtreme 200 below: