We finally got to test ride the new 2018 Hero MotoCorp Xtreme 200R at the Buddh International Circuit. You might wonder what fun would it be to ride a 200cc motorcycle on a racetrack and you wouldn’t be completely wrong.

It was my first ride experience of the Buddh International Circuit (or any racetrack), so obviously, I was excited about it. But from what I’ve learnt from seasoned racers, the Buddh International Circuit can be a bit of a drag on anything below 600cc or 100 bhp. So, with just 18.4 hp at disposal, was my first every proper track day experience not likely to be as exciting as I wanted it to be?

I got about 15 minutes on the racetrack with the new 2018 Hero MotoCorp Xtreme 200R and here’s how it felt like.

Before we talk about the ride experience, let me give you a quick overview of how the motorcycle looks. For starters, the new 2018 Hero MotoCorp Xtreme 200R isn’t the sharpest looking motorcycle when compared to its rivals – the TVS Apache RTR200 4V, the Bajaj Pulsar 200 NS and the KTM 200 Duke. But it’s stylish, nonetheless.

It still has that Xtreme family persona, and if you look closely, the fascia and the tail end will remind you of the 2015 Hero Xtreme Sports that we tested back in… well, 2015. So, you’d find an identical headlight with LED DRLs accompanied by a dark tinted fly-screen. However, the 200R gets a touch of premium-ness with the body-coloured headlight mask which, if you concentrate hard, is shaped like an “R”. Another indistinguishable element is the dual-tone front fender which features Hero branding at the front, and with the addition of ABS stickers on the right. At the rear, the full LED tail light, too, is identical to the Xtreme Sports. 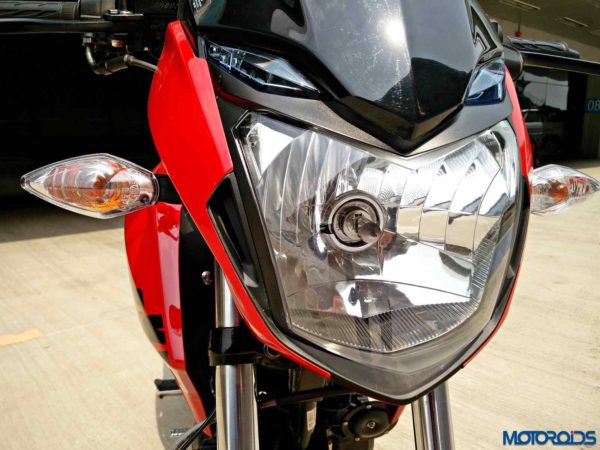 But apart from these elements, the new 2018 Hero Xtreme 200R gets a massive dose of steroids all over. As aforementioned, visually, the new 2018 Hero Xtreme 200R isn’t as sharp as some of its rivals but it’s still quite a muscular motorcycle. The fuel tank, for example, gets a bolt-on shroud which gives the motorcycle extra width. Moreover, a bolted tank shroud means less expenses and easy swap of the panel in case of a crash.

Another noticeable feature on the fuel tank is the “Xtreme” branding which runs through the side without being too flashy. On top, the flush-type fuel tank lid gets a dual tone finish, with a silver ring around the black cap. The fuel tank also features a three-piece rubber pad straight from the factory, which isn’t the most appealing to look at but does its job. We’d probably trade that for a more premium unit but that’s a personal choice. 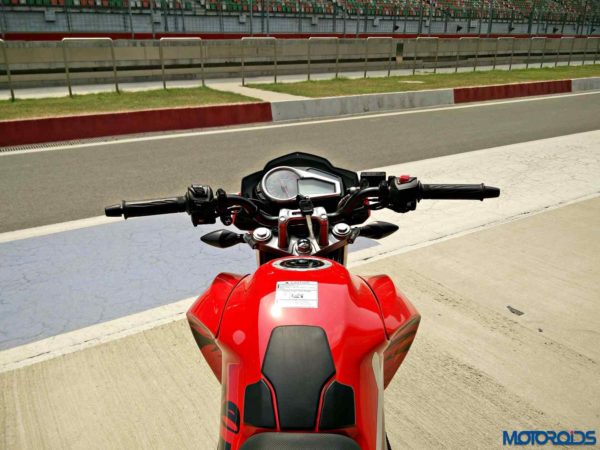 Behind the fuel tank is a single piece, step-up saddle that gets a hump over the pillion seat to stop the passenger from sliding ahead while braking. The side panel gets a contrasting, matte-black finish, and so does the engine underbelly, while the rear panel continues with the body paint and the 200R branding. The pillion grab-rail merge well into the pointy tail design of the motorcycle. The LED tail light is accompanied by a pair of clear screen blinkers which are placed next to the numberplate illuminator.

The overall design is stylish and appealing but there were a few elements which left us wanting for more. The exhaust, for example, could’ve worked with a better design and eliminated the tip at the rear. Then there’s the new instrument console. While we appreciate Hero MotoCorp retaining the analogue tachometer – there’s something about that which a digital meter cannot replace – the digital console doesn’t display much more than the bare-basic information and only toggles between the Odometer and two trip meters. Lastly, the rubber grip on the footpeg felt flimsy, and it showed signs of loosening during the test ride. 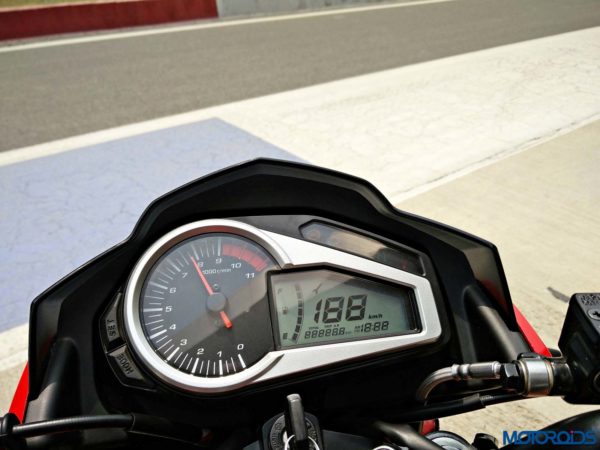 The new 2018 Xtreme 200R is Hero MotoCorp’s attempt to re-enter the premium motorcycle segment after suffering some disappointment with the Karizma series. The motorcycle looks stylish and should appeal to someone who’s looking for decent performance with the Hero MotoCorp’s reliability, and well-spread spares and service network. The overall build quality looks solid and, apart from the aforementioned complaint about the rubber on the footrest, there’s nothing that should bother a potential buyer.

Check out a detailed walkaround video about the design of the new 2018 Hero MotoCorp Xtreme 200R from the unveiling, back in January 2018.

The engine feels refined, but slightly underpowered, especially on a chassis that has so much more potential. We’ll get to that in the later part of the review. As aforementioned, the Buddh International Circuit was divided into two parts – one reserved for test rides and other for photography. The part of the circuit that was reserved for the test rides mainly comprised of corners, and we didn’t have access to the back straight of the racetrack. Thus, we cannot comment on the top speed of the new Xtreme 200R. The speedometer saw figures of upto 104 kmph on the limited straight lines that we had access to, with enough grunt still left to clock some more speed. 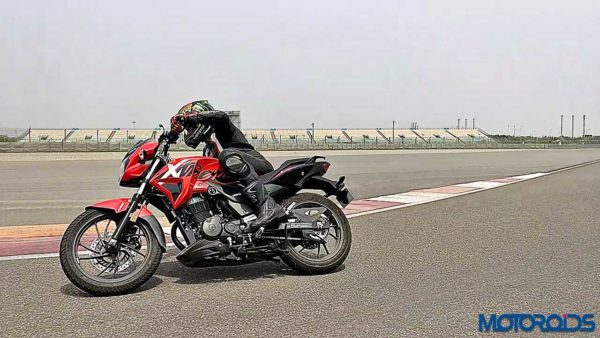 The engine on the Hero Xtreme 200R is tuned for a better mid-range grunt which would come handy for a laid-back city ride where it will spend its lifetime. We’ll reserve that conversation for some other day.

Anchoring tasks are provided by a 276mm front disc and a 220mm rear, which come as standard. The motorcycle also gets an optional, single channel ABS which improves the stopping power. Being on the racetrack, we were pushing the braking department to the limits and it didn’t disappoint. It isn’t as groundbreaking as some of its rivals but it isn’t shabby either.

How does it handle?

What’s better than testing a motorcycle’s handling dynamics at a racetrack! 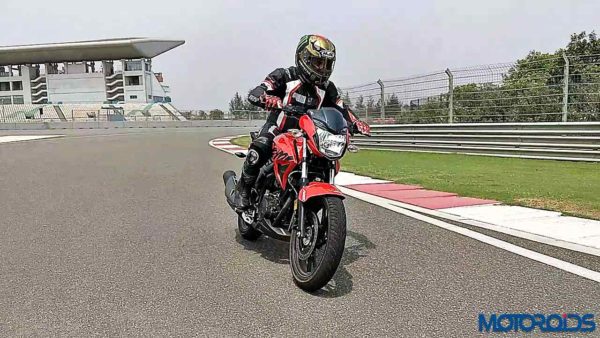 I’ve been waiting for this for a long time – to test ride a motorcycle to its limits in a controlled environment – and the Xtreme 200R did not disappoint. The new 2018 Hero MotoCorp Xtreme 200R uses a Diamond tyre frame that is aimed to offer stability in corners and on straight lines, and it does that pretty good. The motorcycle feels planted on straight lines, and around the tight corners. Flicking it from side to side in chicanes around the race circuit is remarkable easy too.

The handling department does surprise, especially with the kind of ergonomics that the Xtreme 200R offers. With a tall-set handlebar, the ergonomics aren’t as committed and one would want for a motorcycle on a race track. Yet, the new Xtreme 200R gives enough confidence to push it to the limits around a corner. The handling is further complemented by the suspension. 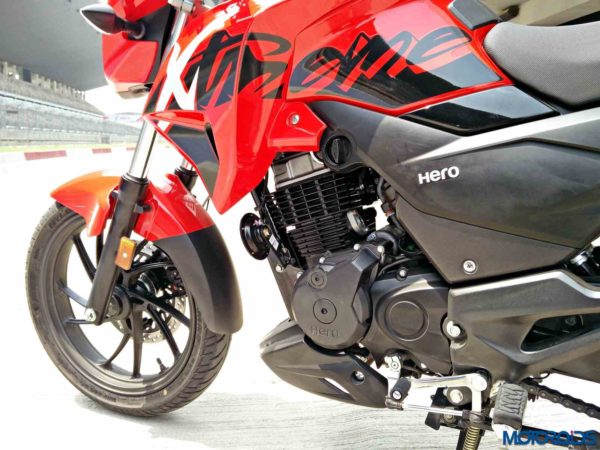 The motorcycle uses a conventional, 37mm telescopic hydraulic suspension upfront and, for the first time, a monoshock at the rear. The rear is a seven step adjustable unit and I found it to be perfect in the pre-defined setting for my 85 kg weight. Do remember that we rode on one of the finest stretches of tarmac in the country and thus we can’t really comment about the shock absorption duties of the suspension.

So what’s the final word?

The new 2018 Hero MotoCorp Xtreme 200R is appealing in its own way and the overall package is quite likeable. The 2015 Hero Xtreme Sports style fascia and tail light could’ve been left behind for some newer styling cues, especially considering the fact that the Xtreme 200R is a little late to the 200cc segment, but isn’t really a deal breaker. The overall build quality is commendable and except for a couple of complaints that we’ve already mentioned, there aren’t any downsides. 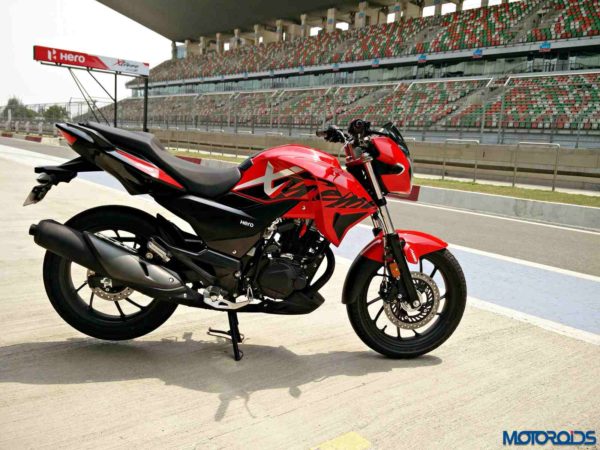 The real let down, however, was the performance, especially on a package that has so much potential. The motorcycle feels remarkably planted around corners, but the exit to the straight leaves you for wanting more. But if you think about it, the motorcycle will be spending most of its time on the road and for that, there’s a decent amount of firepower that the Xtreme 200R gets.

Everything boils down to pricing and that’s where Hero MotoCorp scores top points. The new Hero MotoCorp Xtreme 200R has been priced competitively at INR 88,000 (ex-showroom) making it the most affordable 200cc motorcycle in the Indian market. The INR 88,000 price tag gets you dual disc brakes and single channel ABS.