Subsequent to the overwhelming responses we got for Dr. Arnob Gupta’s blistering 78 hours ride from Leh to Kanyakumari shattering the existing Limca Record, we now bring you day wise experiences of the grueling ride from “The Flying Doc” himself.

We start with Day 1 when Dr. Arnob started the run, recce’ing the stretch right uptil Leh. Unfortunately there are no pics that were clicked on the day, but as a novelty- here’s his marathon CBR250R with all his in-house modifications. 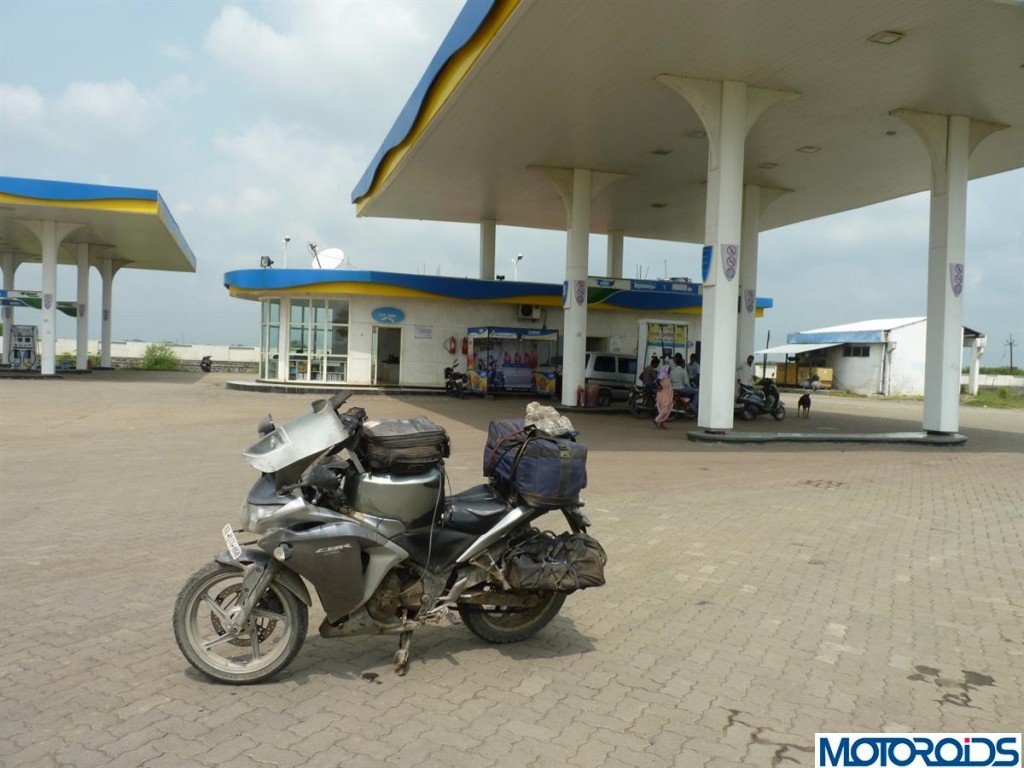 Over to the Flying Doc!

“Finally… the big day when the ride began. It was a cold drizzly 5 am as I set off, all packed and ready, and more or less on time as well. The roads were wet, and each and every vehicle had this plume of muddy spray trailing it so reaching Palaspe Naka at Panvel, which should take less than 45 minutes took an hour and 15 minutes instead. Soon, I did not need my lights but had to be cautious all the same as I headed past Khopoli. Pune came up and I had to pay attention to the GPS to help me get on the Solapur road. Unlike the Satara road, where you whiz along the highway and are finally done with the city of the Peshwas with some degree of finality as you get onto the viaduct heading towards Katraj, with the Solapur road Pune sort of stretches on and on, like that noodle which seems to have another half meter in length somewhere in the depths of the plate even after your forks starts to look like a small club with a flat metal handle, taking almost four hours ex Mumbai before I could finally get the last traces of Pune behind me.

I stopped some distance down the highway for a round of tea with biscuits and then decided that I’d go all the way to Solapur before getting of NH 9. The option was to go till Tembhurni and then head north to Barshi, but as per latest intelligence, the road till Solapur was to all intents and purposes almost complete except a few minor stretches, and there did not seem to be any need to clock up single lane kilometers when I could do the same on dual carriageways instead. And so it was. Rest halt notwithstanding, I was there by 12 noon, and from there I turned north to avoid the mess that I know NH9 is after Solapur. My route was going to be Osmanabad Ausa Nilanga Bhalki Bidar Zaheerabad.

Most of it was good, reasonably pothole free road and I did not mind doing the extra distance considering the moonscape NH 9 was in, but some sections of the road are not in very good shape. Let me put it this way, Ausa and Bhalki apparently have yet to produce some politician of consequence….. all the same, it did take time and I knew I was not going to reach Hyderabad much before 6. I had lunch somewhere on the route , coordinated with Mr Purshottam regarding what time we were supposed to meet, and in some time was sitting and having tea and bread omlette with him at a restaurant just after the toll plaza. Even though this was one of the better sections of NH 9 I can say there are some nightmare potholes between Zaheerabad and Sangareddy, the road only becomes better once the 4 lane stats.

We’d planned on a 15 minute meet but when talkative bikers meet, schedules like that are unlikely to be kept, and it was almost an hour and 15 minutes later that we realized that I’d better get moving soon. Purshottam gave me the taaja khabar that every road user craves for, i.e. the status of the different roads and the traffic situation regarding the same, as I’d shortlisted three roads for the final run through Hyderabad – apparently, only the ring road was worth traveling on from the standpoint of traffic as well as surface. Very kindly, he guided me out of the city using that road, and as we waved goodbye, it started to rain.

Nuisance value at first, then in torrential sheets. In fact, it did not stop till I reached Adilabad, but I have to say the road and traffic conditions were so good, that I could maintain near triple digit speeds pretty much all the time. Previously, when I’d traveled on this stretch more than a year back, 100 km out of Hyderabad it was a construction zone – now all that was a memory. I avoided the bypass, rode into Adilabad town and checked into Ravi Teja Hotel, for some 500 odd rupees. I was not hungry and it was off to the land of nod after a refreshing hot bath.”