Click here for the first part of the Story

The next morning, I got up at a sane time and was off, looking for fuel by 10 in the morning. Finally I located a pump on the highway, filled up the big tank and prepared to roll onwards. Before starting I casually asked the attendant about the road ahead, and he gave me the cheery news that the 4 lane ahead was “khatam” in a couple of km and it was construction zone for some distance ahead. I would come across worse sections of road later butanytime 4 lane roads get over and construction zones , or to be more accurate, abandoned construction zones begin, there is some irritation. Nothing to be done about it, though, just drop speeds significantly and muddle through.

And then … disaster. At Badner town a two wheeler, 3 up suddenly climbed up onto the embankment from behind a parked Rickshaw which made him invisible till that point, panicked, and turned onto my side of the road. The result – a low speed head on collision.

Fortunately, there were cops on the scene. So we all went off to the local police station. Documents checked (Mr three up was not carrying any at the time), it was time for a small chat as regards “compensation”, even though he had to concede he was traveling on the wrong side of the road. A few points to remember – the villager can do no wrong in his village. By bringing us to the station, the police were actually helping me – there is a very thin line between villagers and dacoits if they think they can get away with robbery. Besides, the police did not want to book anybody for helmetless riding/3 up/wrong side riding as it is the norm over there. So, finally, I parted with 700 bucks “compensation” for a badly scratched front cowl to save some face for the police for helping me get out of the crowd situation and I was free to go. Lesson learned: Keep your finger firmly on the horn button while passing through villages. I did that for the rest of the trip.

You pass through villages in a quiet, civilized manner at your peril. I have already learned to drive during the day with the headlight on, but this was one instance that did not prevent the accident. 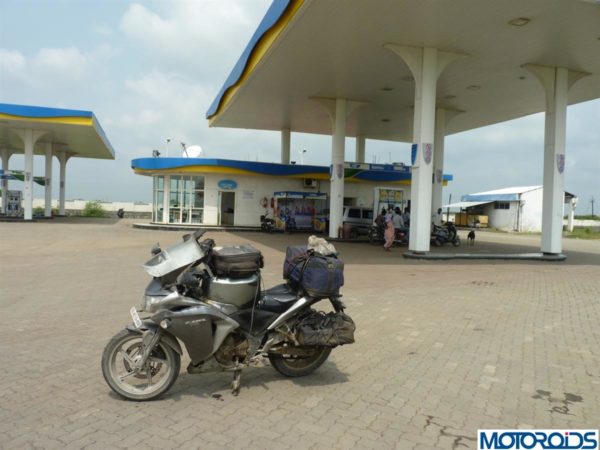 This entire thing wasted one and a half hours – but the one good thing was that the police assured me that within another few kilometers, I’d get the sort of roads where the bike could stretch it’s legs. Miraculously, the 4 lane appeared again and I headed towards Nagpur at a decent speed. Fortunately, Nagpur now has a bypass, a lovely 4 lane road that skirts the entire city and suburbs. Lulls you into believing that from now on, distance will be covered at an average speed of 100 kph and drops you right before some of the worst roads in the entire North South corridor. The ghastly road south of Seoni has no business to be called a road  – there is more pothole than tarmac for a good 70 to 80km, and in many instances, it makes far more sense to ride on the soft shoulder where the mud means that the potholes don’t have the severe drops and crests as are there on the tarmac sections, but when it rains, it’s a bit of a choice between the Devil and the deep blue sea. Average speeds – 25 kph here, and in some time I began to feel hungry, and stopped at a pothole side dhaba for lunch and a half hour shuteye. Fortunately, in spite of it being a forested area, this collection of potholes has several eateries, as it is an important collection of potholes National potholeway #7, or if you prefer, Asian potholeway #43, connecting NH2 to the NS corridor, via Jabalpur.

Out of nowhere, the 4 lane appears again and you are on the Seoni bypass and you start to relax, thinking the worst is behind you. Wrong. Another installment of National potholeway 7 lies ahead. It’s slightly shorter, about 50km, which takes about 2 hrs before you lurch and bounce along to Lakhnadon, and leave ASIAN potholeway 43 behind for good. All this bad road had taken about 6 hrs more than I’d planned from the comfort of my desk in front of the monitor displaying google maps, and it was now beginning to get dark, as I now turned onto NH 26. The Lakhnadon Narsimhapur road is very very good, but there is a small problem.

We all know what cattle look like during the day, but at night they are different. 80% chance you’ll first view them as two luminous green dots 2’ above the ground, at a fixed distance from each other. If you’re unlucky, you’ll see only one green dot and if you are really unlucky or if the cow has already had a brief interaction with a truck, none, except for some amorphous discontinuity in the road.

Whoever manufactures cats eyes hit a bonanza with this road. There is one row marking the median, the broken lines separating the lanes, the left lane, another one where the shoulder ends, and still another one off the road on the left. As you switch on your lights the road is lit up like a runway. In that sea of bright yellow reflectors (at any point of time you can se at least a hundred) you have to scan continuously for the two dim green dots and decide fast whether there is anything odd with regards to the road surface. No potholes on this road, just the occasional cow. While I’d managed to pick up speed, it was now almost 8 in the evening and I knew that my high hopes of crossing Delhi sometime in the early morning were just that.

Narsimhapur came up and the bypass is mostly complete, but after that the road is a disaster for quite some distance and it includes a busy level crossing followed by a diversion over a river where the new bridge  has still not been built  (and from the looks of it is not going to get built in a hurry). Fortunately, no really deep craters , but mostly loose aggregate, maybe maintained that way for 30km to teach those who complain about too many reflectors a lesson……after which it is gorgeous 4 lane ALL the way to Babina.

This road still does not see too much use by truckies, possibly due to the awful stretch between Jhansi and Gwalior which I’d heard about but had yet to traverse. The greatest quantity of traffic there is cattle. They graze on the median (lush flowering bushes placed there thoughtfully by our traffic planners), scratch themselves after aligning themselves on the lane marking, generally hang out in clumps with others of their kind on the nice, smooth road, and, of course, crap all over the road. In some places there is so much dung that the tarmac road has a BROWN surface.

Welcome to National Gobarway #1 connecting Babina to Narsimhapur. A very fast road except that you have to keep your eyes peeled for cattle at night, All the bypasses are complete, you don’t have to get into Lalitpur or Sagar unless you specifically want to, so if you don’t know what lies ahead, you could be excused for doing there mental sums and assuming that @80 kph, you are now just a few hours out of Delhi. However, as a famous general once said “hanuz Delhi door ast”.

National Gobarway # 1, for whatever it’s minor drawbacks  has a smooth surface, no potholes, little vehicular traffic and zero speedbreakers – it was dispatched at a pretty good rate and as Babina got ever closer, I wondered whether the road till Jhansi at least would be OK. There were rumours of the potholes having been repaired…but…..