Dr. Arnob Gupta popularly known as “The Flying Doc” has done it once again. He seems to have sworn to break every single land-speed record in the country by a humiliating margin. Only a few months back he covered the entire 6000km stretch of the Golden Quadrilateral in a little over 90 hours, storming into the Limca Book of records. This time, he has created a new record for the Leh to Kaniyakumari North-South run – covering the distance comprising some of the toughest terrains in the world in a mind bogglingly fast 78 hours.

We’d like to congratulate Arnob for his incredible feat on behalf of the Motoroids team and the entire biking fraternity. We’d also like to extend our gratitude to the individuals who helped him in achieving this milestone. 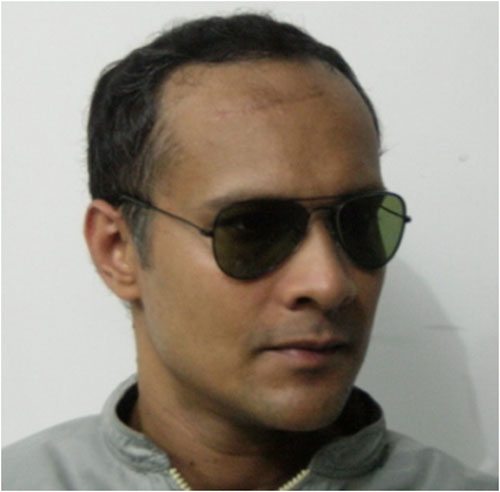 It’s an emotional victory for the Flying Doctor, who has on previous three occasions tried and failed to achieve the feat. Any other man would probably have given up after the very first failure, second at most – not Arnob though. With his steely resolve and an even steelier butt, Arnob went on to keep trying until he got this achievement ticked out of his bucket list. He is what we commonly term, an urban legend.

Arnob will be writing a detailed log of his adventure in the coming days. In the meantime, let us have the privilege of introducing to you the legendary machine that helped him set the trail ablaze. This will be followed by a story about his previous attempts at the record, and then a quick log of the journey by Arnob in Bullet points. 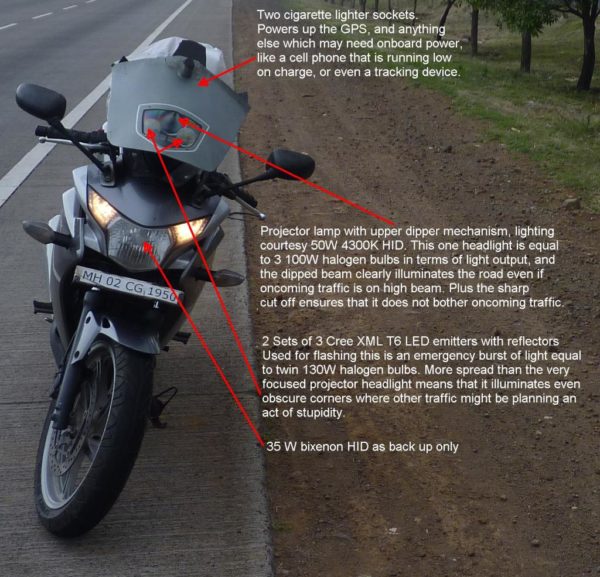 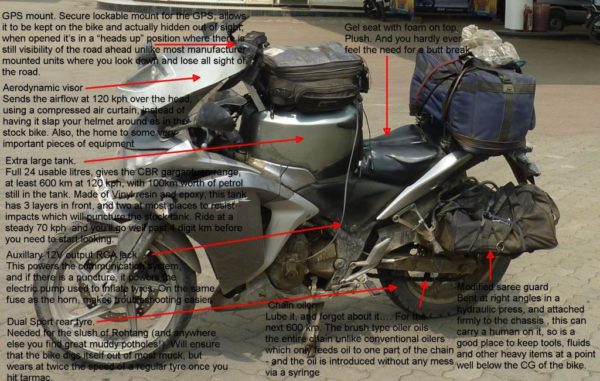 Here’s the story of Arnob’s previous attempts at the record. 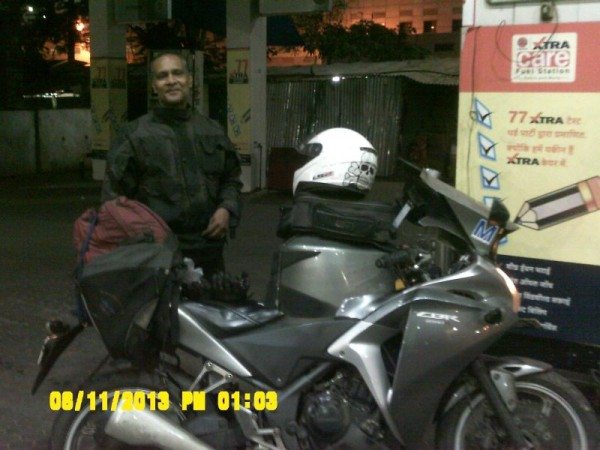 The score till date: K to K: 3 (including two knockdowns) Me: 0. Three rounds were over. It was time for the fourth round.

Equipped with a Karizma fitted with extra lights and an auxillary tank strapped to the back, I overcame a round of AMS at Marhi to reach Jispa the next day where I had some more of the same (though milder), before finally reaching Leh the next night. A full days rest, no AMS and I was ready to roll at 4:30 am. About 3 hrs into the ride, climbing Tanglangla, it started to snow. Lightly at first, gently covering the landscape with a dusting of white, then heavily. The road disappeared under 3 inches of snow. It became uneven, and the rocks on the road had a coating of ice on them as I kept climbing. With all that snow on the road they were not visible any more. Crash! Skidded on an ice covered rock. Fall #1. I picked up the bike and carried on. Fall#2. Same response from me. I was now about 2 km from Tanglangla top, after which the descent begins. Fall #3. This was enormously energy sapping. Lifting up a fully loaded bike is no joke at the best of times. In the thin air at 16500 feet with slippery ice covered rocks beneath you and the bike, it is even less fun. I felt dizzy from the exertion. I decided that henceforth I would ride with my feet down, and walk the bike along as far as I needed to. No chance of falling again as I knew that lifting the bike was not going to happen again.

Another fall and I had no energy to lift the bike again. I was not in the least bit cold, and took stock of the situation. Today was not my day. Maybe I’d return to Leh and start again the next day once help arrived, as I was not in a position to go anywhere now. I sat at the side of the road, my bike fallen in the centre, and waited. 20 minutes later the lights of a taxi convoy became visible. A brief discussion followed pertaining to the merits of leaving the bike where it was as opposed to taking it with me – the driver finally agreed to take it along and it was lifted up onto the roof.  I couldn’t help. I felt sick. The convoy tried to move on. It couldn’t. Out came the snow chains and finally we were on our way.

The rescue was good for me, but not for the bike. Bouncing along over the potholes, EVERYTHING on the left side of the bike was shattered. The extra lights, crash guard, air horn, even the footpeg hanger extrusions… these were junk now. My priority was repairing as much as I needed to ride and riding home on a minimum equipment list as it were, and doing proper repairs at home.

Attempt #1 was over. Floored by the mighty Himalayas

Same bike, same loadout, but there was a small change this time – the bike had been fitted with a R15 monoshock and linkages which meant it was much better in terms of road holding as well as shock absorption. The extra fuel tank was gone, as I figured I did not need so much, and could make do with 3 litres in bottles for emergencies. This time the trip till Manali was smooth – but unusually for June, Rohtang pass was closed for the previous 10 days. And it continued to stay that way with stories of waist deep slush in some of the other passes doing the rounds. 4 days of waiting and it became clear that it would be a minimum of another 5 days before the passes would open (subject to good weather!). Once open the vehicles stuck there would get priority. The “roads” would be icy bogs. All of which might shut down again due to the weather.

Time to pack up and head for home. The first attempt had lasted less than 200 km, and this one… I had not even made it to the start point. I think it might hold the record for the shortest Limca endurance attempt ever. Start point minus 495, having spent 4 days in the vicinity.

The bike was fully prepped and there was another small time envelope to do the run – late September. Monsoon practically over, and minimal slush on the passes. All the same for the slush, I was going to use dual sport tyres, much better in the slush than the street tyres which the bike would be shod with, ex Manali, for the rest of the run on tarmac. The trip to Manali was fine, as was the climb up Rohtang, almost to the end. As there was traffic, I was riding on the edge of the cliff, but due to some obstruction in front, I slowed down and came to a halt, and put my foot down. Into space.

The next thing I was aware of was a panoramic view of the sky and the feeling of landing on my back and beginning to roll after parting company with the bike. I came to rest on a narrow ledge, the bike near me, more than 30 feet below the road. Miraculously, I had no injuries except for a minor scratch on my palm (which was only because I had taken my gloves off to take photographs).  The bike however was not so lucky – the front end was smashed, but that had protected the chassis. How I got out of there is a long story, but eventually I did. The bike had to be couriered back and the courier (GATI) delivered my luggage including the bike after pilfering some items and then altering  the shipment logs to try cover up the theft.

www.gaticourierhorrorstory.com is the site to go to if you ever have the urge to ship your bike using GATI Attempt# 3 was over. Almost knocked out be the mighty Himalayas. Almost but not quite. K to K had built up a good lead. It were winning the fight, which had already cost an average of 40K/trip if bike prep was included. But for the ZMA, it was a knockout punch. Apart from one trip out of town, it was used henceforth as a commuter.
Read about the previous attempts here:

There would be a gap of two full years before I would take on K to K again. And it would be on a rather more capable bike, a CBR250 R fully modified for fast, long range touring. By itself, the CBR250 is a very sweet bike, but not a tourer. A hard seat, little weather protection, a tiny tank, very poor headlight…..these things need improvement.

At the outset, I’d like to thank Mr HV Kumar, Arpan Diwanjee, Mr Piran doctor and Mr Dorje and his travel agency partner, Mr Atish for the help provided during the run 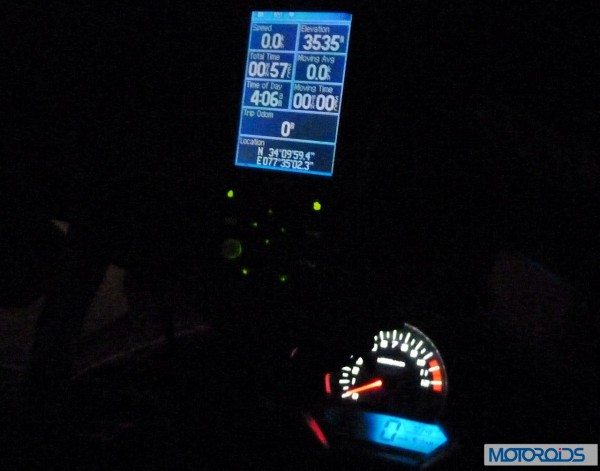 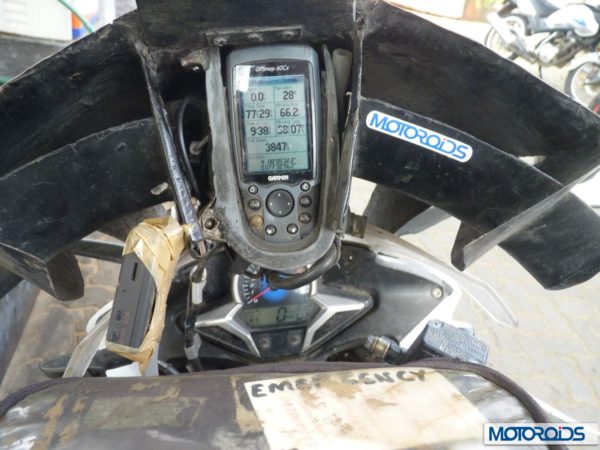 Congrats, and salute to the living legend!