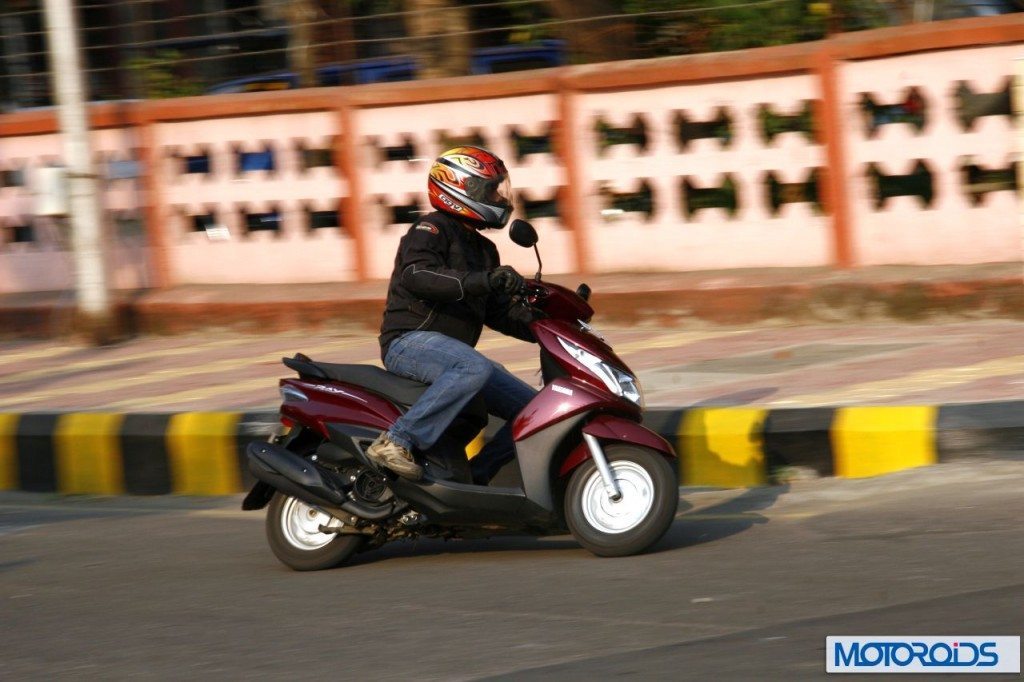 With the scooter segment playing an increasingly important role in two-wheeler companies’ fortunes in India, it was only a matter of time before Yamaha joined the party. Enter the Cygnus Ray – which we’d henceforth call only Ray. Astronomically implied to be a strong ray of cosmic light in the galaxy, will it be strong enough to outshine its rivals? We find out 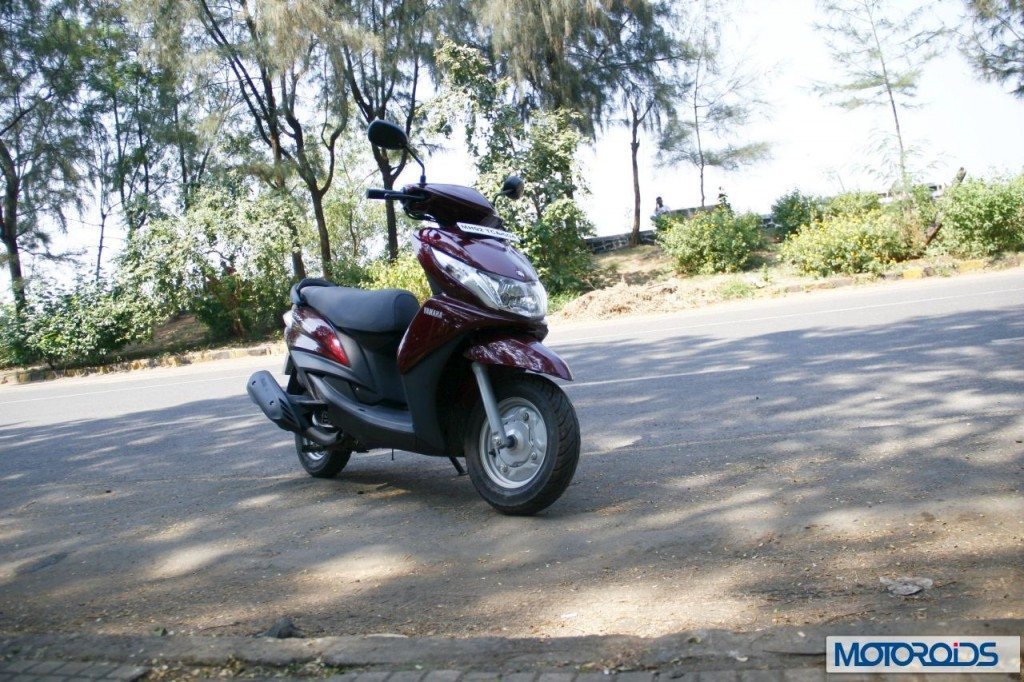 Targeting the urban female riders, the Ray appears marginally diminutive in size when compared with other unisex and male targeted scooters. Having said that it’s not too small either. The front styling is striking to say the least. With the unified headlight-blinker combo, a front forward stance and a zig-zag inner styling of the apron the Ray is an evolved design with just the right dose of sportiness sprinkled in. That prominent crease under the headlight running around the front apron makes the Ray look the most pleasing to eye when viewed from the front three quarters. The Yamaha logo on the flanks looks really cool, and adds an air of internationality to the product.

In profile, the silver finish wheels on our test scooter managed to add a nice contrast to the maroon-black body color of the scoot. The Ray, while being angular and chiseled at the front is more flowy towards the end. The rear panels taper towards the footboard with a slight curve at the end. The pointy black panels merging into the body coloured units add a sense of speed and raciness to the rear. The tail-lamps are unified unit with blinkers flanking the brake lamp. There is a nice interplay of two tones (black and maroon in this case) throughout the length and breadth of the machine, and the black grab rails go well with the treatment. 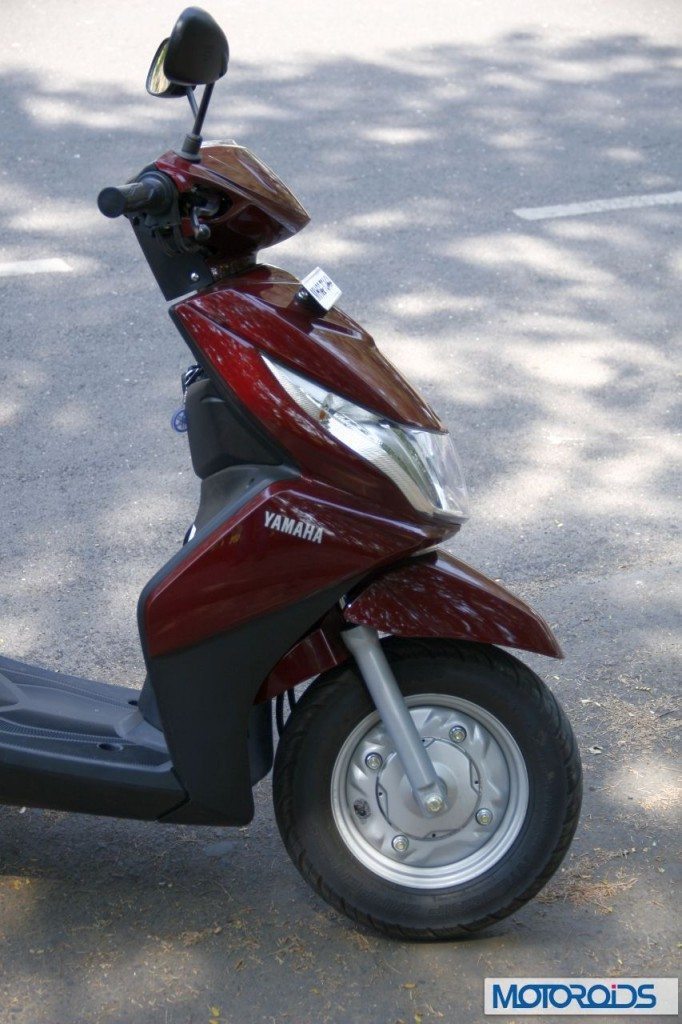 All in all, the Ray is an attractive scoot to look at. Though it doesn’t adorn the retro-glam quotient of the Vespa or the slashy cuts of the Dio, it exhibits a more evolved and balanced approach to design.  A well streamlined and flowing design looks pleasing to the eye, with precise cuts and creases merging at the right places, it’s difficult to spot a distortion on the Ray. The styling doesn’t particularly look feminine or masculine from any angle. While Yamaha are targeting it as a female centric scooter, we really think it could have passed as a unisex machine with flying colors. 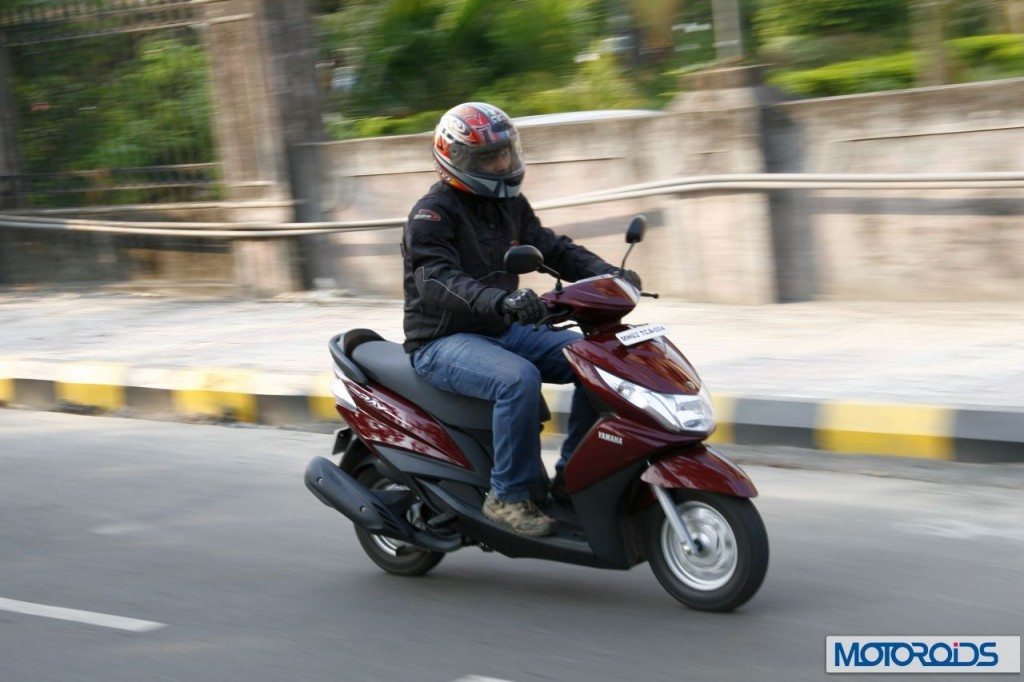 The Ray is propelled by a 113cc air-cooled, 4-stroke, SOHC, 2-valve engine. Power output is rated at 7.1PS @ 7,500 rpm while peak torque is 8.1 Nm @ 5000 rpm. Now those figures may not be class leading, but are pretty much at par with the segment, and good enough to haul this machine rather peppily around town. At 104 kg, the Ray is a light scooter, and the fact really helps it get upto speed in good time.

The engine exhibits typical Yamaha traits – rev happy with a rather peaky power delivery. While there is reasonable power on tap at low revs, the engine comes into its element only when you wring the throttle a bit and let the revs build. The Ray sings a whirry tune, which is quite unique to it. There is a sense of sportiness about the way it sounds, every bit a Yamaha. 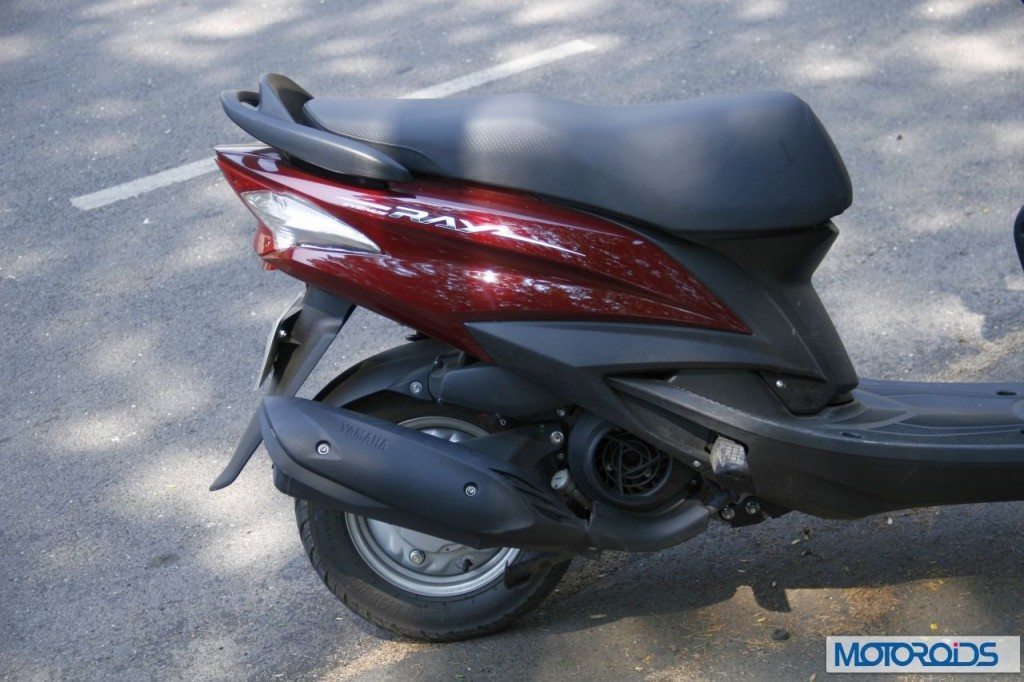 The comparatively smaller dimensions might fool you into thinking that the Ray wouldn’t be a fast enough machine, but it turns out to be a restless, clawy cat as you wring the throttle. Twist the throttle and except for a minor initial lag, it pulls away with agility and plucks numbers on the speedo in pretty quick time. Though we didn’t clock the acceleration and top speed timings, we did manage to once casually check the top speed on the GPS showing 82.33 kph. There is, however a massive error on the analogue speedo whose needle swings all the way to the extreme marking of 120km/h. That’s an optimistic error of as much as 50%. It may have been an error specific to the test scoot, but it it’s not, then Yamaha Motor India should fix it as quickly as possible. 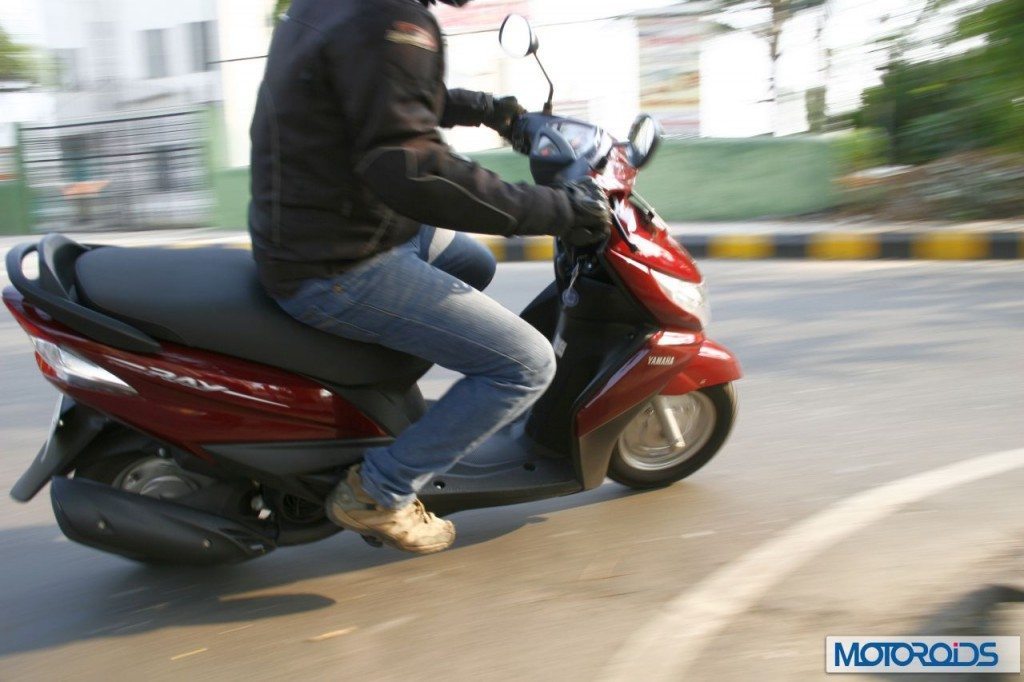 The Ray comes across as an exceptional machine when it comes to road-holding and balance. It is extremely well mannered on cornering and composed even when rushing at top of its breath. The smaller dimensions aid in quick change of direction while riding in traffic as well as while taking on those sweeping curves. The telescopic front and springs at the rear perform decent suspension duties in consuming the usual irregularities without a worry. The rear feels softer than the front and it is only when the undulations get overly disturbing does the Ray start to bounce and jerk. In usual road conditions it’s a composed little machin.

Braking is one of the highlights of the Ray – an absolutely remarkable trait. From sudden stops while ambling around in traffic to shedding speed at the higher end- it does the job in the most reassuring manner a scooter can. We’re at a loss to recollect if we had a braking experience as the Ray on any scooter we have put to test before. We’d give an A+ here just for the braking. 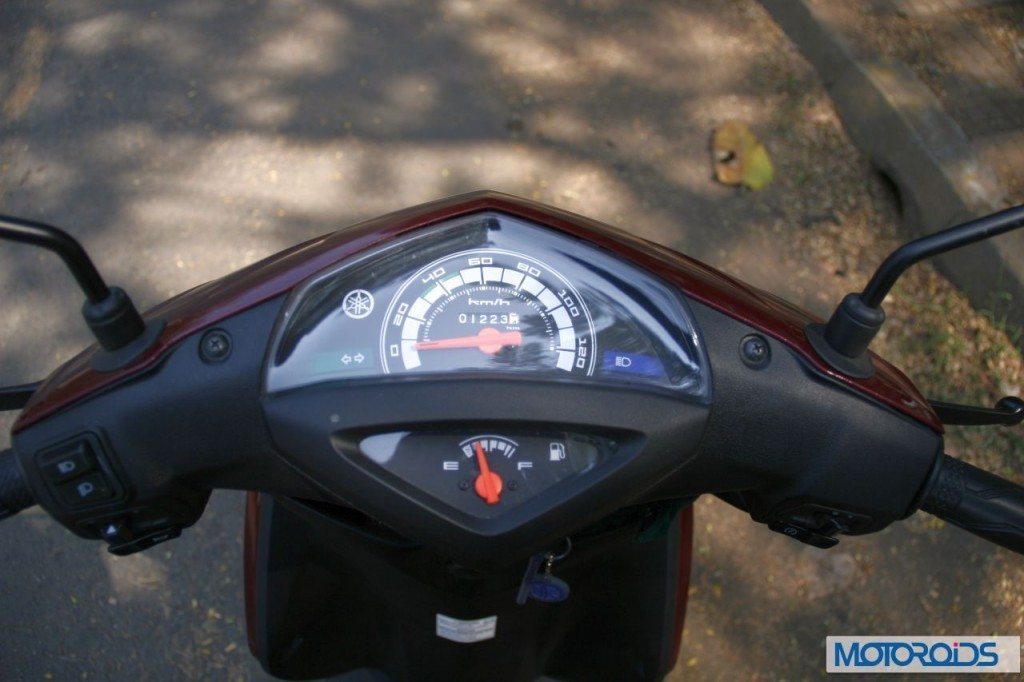 Focus on quality and finish has been one of Yamaha’s fortes as a manufacturer, as evident on their R and FZ series of motorcycles. The quality on the Ray is no exception. From the paint to the matt finished plastic panels to the engine- everything impresses with the quality and finish. Even the rear tyre hugger though out of direct line of a human eye looks top notch. With such a superior package at hand, the only disappointment has been the instrument console. Though we are not complaining about the quality here, we wish the design were more contemporary and classier. The switchgear is well finished and evokes a sense of quality and durability on operation – so much so that it might embarrass a few motorcycles on quality front. 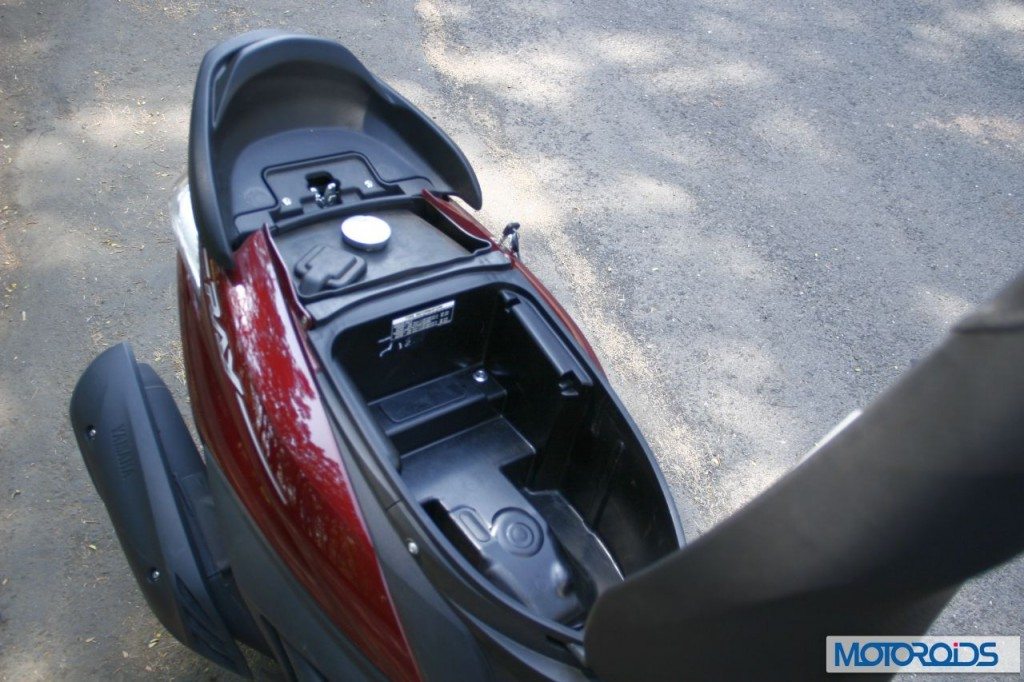 We applaud Yamaha for paying attention to some important features and utilities on the Ray. The seat angle is relatively flat and well contoured with less tapering angle towards the tail. Coupled with good quality non-slipping rexine seat cover, it ensures that you don’t slide ahead on hard braking or on bumpy roads. Even with a pillion on board, there is no sliding ahead under hard braking.

The seat height on the Ray is relatively lower, this aids putting both feet on the ground during emergency halts. Since the scoot is targeted at female riders, this comes across as a great feature, as we found out by asking a few members of the fairer sex.

Footpegs for the pillion nicely fold into the footboard. They aid the pillion rider to transfer weight and aid him to brace himself under emergency braking. The only hassle is while moving around in slow moving traffic trying to squeeze in between tight gaps when the rider’s feet tend to interfere with the pegs. 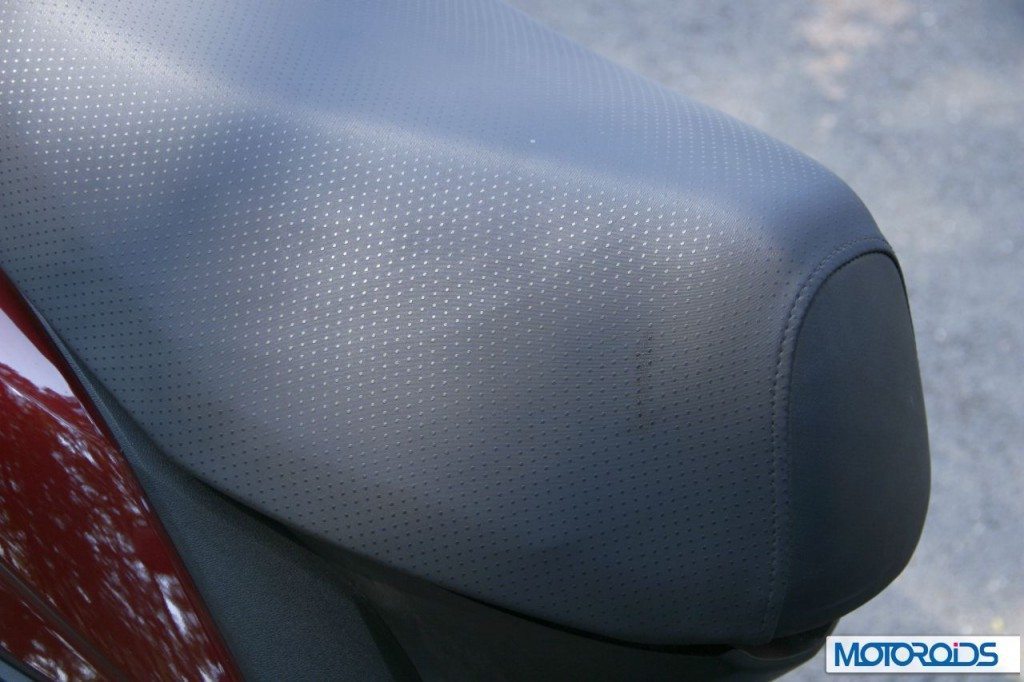 The underseat storage is one of the areas where the Ray doesn’t exactly shine though. It is only spacious enough to swallow a small size helmet. An open face Vega Boolean was struggling to find space down under. Thankfully Yamaha has compensated for the lack of underseat space on the outside in form of two cubbies at the front and a bag hook. Though it might look unnecessary at times, it’s a pretty useful addition to carry a cleaning cloth and store a water bottle in peak summer with the hook taking off the weight of your shoulders by holding a bag or a large handbag in case of ladies.

The side stand is a boon, and is provided given as standard equipment. The mirrors take care of the rear viewing duties and the grab rails are comfortable to hold for pillion. The headlight spread is impressive for a scooter in dark. The horn though typically a scooter sounds louder than the puny horns that come on premium motorcycles.

From the manufacturer’s point of view, Yamaha definitely deserves applause to have come out with an extremely competitive product at the very first attempt in an arena flooded with similar products by every other competing brand. The Ray is one of those machines you can just hop onto and feel at ease right from the word go. It’s quick, sure footed and a very comfortable. It’s a handy tool to wriggle in and out of the urbanscape and certainly looks and feels well built. Though we’re certain that the female population would instantly fall for the Ray, the overall stature of the scoot MIGHT woo the male crowd as well making it a capable unisex scooter. If it was not for the smaller dimensions, we would completely disregarded Yamaha’s focus on catering to the ladies-only market as they have been advertising it to be with the leggy Ms. Padukone as their brand ambassador. At Rs 46 k ex-Delhi, it’s slightly pricier than some of its competition, but the immaculate build quality, styling, performance and brand name add up to somewhat justify that small premium.

We had an extended stint with the Ray serving us for more than 400 kms from squeezing out of packed traffic to open highway runs. When the time came to hand over the bike back to the Yamaha Factory Showroom in Malad, Mumbai who had been extremely cooperative in the arrangement, we realized that the little scoot had found its way into our hearts. Walking away from it in the parking lot, heads  turned and we said “All good things come in small packages, they definitely do!”