Maruti Suzuki has given the Ertiga a revamp for the next model year, the second generation Maruti Suzuki is here. Quite a lot has changed in this car and mind you, this is more than just a new body kit. The dimensions are now changed and much more space has been liberated inside the cabin. Here is our review on the car which has been summed up in this review of ours.

As mentioned above, the Ertiga has gained a lot in terms of its dimensions when compared to the outgoing model. Despite carrying the same wheelbase, Maruti has managed to free up more cabin space thanks to a smaller engine compartment and the extra length which has been added to the rear. The car now distinguishes itself from the Swift with double barrel headlamps, a raised bonnet and a more aggressive looking front end. Maruti has missed out on LED illumination which is quite a standard thing to have in cars now. The side profile looks neat and now gets a larger greenhouse area which adds a sense of space inside the cabin. The top end models get 15-inch alloy wheels A crease below the door handles gives the car an athletic character. The roof also gets a floating roof design. The rear carries the most drama and is the best angle of the car.

The interior of the new Ertiga is miles away from the older one, both in terms of quality and in terms of looks. The dash looks rather nice in the beige theme and gets wonderful faux wood inserts, which have been installed in the leather-wrapped steering wheel as well. Automatic climate has also been installed in the car and there also is a chiller for the front cupholders. The second row offers quite decent space and can fit three adults with ease. Moreover, the second row can be slid and reclined as per your liking. The third row can be accessed by pulling a tab on the second-row seat and offers enough space. Despite the second row being at its furthest position, knees of a 5’10” adult would not brush against the rear seat. Moreover, the large windows and armrest keep the third-row occupants in comfort. 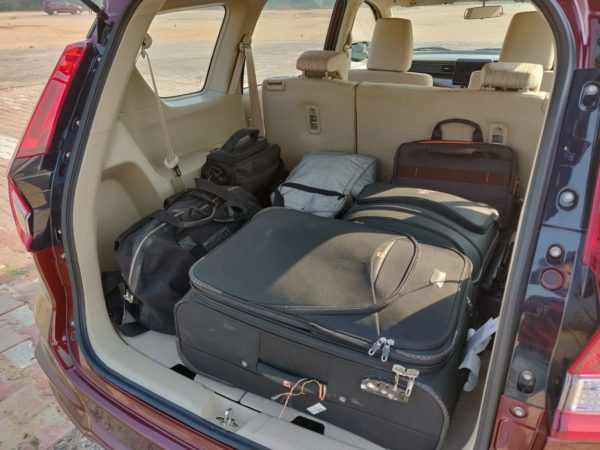 The Zxi+ and Zdi+ variants get a bunch of features inside the cabin. The touchscreen infotainment system is Android Auto and Apple CarPlay compliant. There is an automatic climate control system which keeps the cabin cool at a preset temperature. The rear passengers get a blower mounted on the roof with three fan speeds to choose from. The driver gets a full-colour MID in the instrument console providing a tonne of information. There is a power outlet present in every seating row which is a convenient thing to have. The side mirrors are electrically adjustable and also power folding. You also get a keyless entry system with a push start/stop button which gets request sensors on both front doors. There also is an auto start/stop feature which cuts the engine off when you are stopped at a signal. Safety features included as standard are dual airbags, ABS with EBD and rear parking sensors. You also have a seatbelt reminder and a high-speed chime alert which is offered with the car as standard.

The new Ertiga comes with a new K15 petrol engine and a 1.3-litre DDiS diesel. The petrol engine makes 103 hp and 138 Nm of torque. It is mated to a 5-speed manual as standard but a 4-speed torque converter is available as an option. The diesel only gets a 5-speed manual and misses out on the automatic gearbox. The petrol engine gets a dual battery setup which provides a boost in the low rpm range. The automatic feels a bit old and does not cater to the enthusiast driver. The manual gearbox feels nice and is a joy to shift. The diesel unit delivers a decent 89 hp and 200 Nm of torque, which comes into its element beyond 2,000 rpm. Do watch our video linked below for more on the performance aspect of this car in the video linked below.

To conclude this review, the Ertiga is a nice package which comes at a very affordable price point. Prices start at INR 7.44 Lakh (Ex-Showroom) and go all the way till INR 10.90 Lakh (Ex-Showroom) which makes the car an absolute value for money package. At this point of time, there is no other car that gives you much bang for the money you invest in it and if you re looking for an MPV which would not burn a hole in your pocket, the Ertiga is definitely the car you must go for.