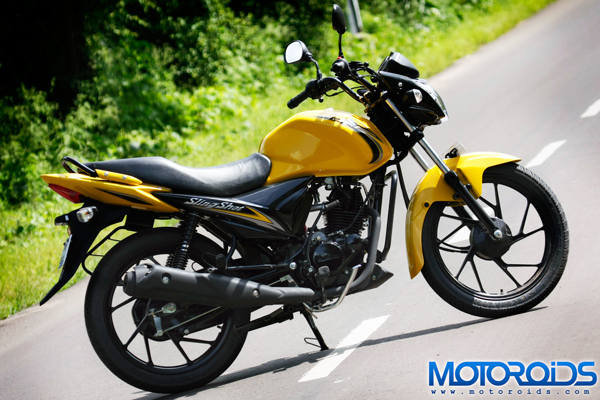 Suzuki India launched the Slingshot 125cc power commuter a few months back to try their hand yet again at gaining some share of the great Indian commuter motorcycle segment pie. Launched between Rs. 51,000 to 53,000, the Suzuki Slingshot has created quite a buzz. But its been two months since the Slingshot came into the market and we don’t seem to spot many of them on the road yet. Is it because its another great Suzuki machine thats failing because of lack luster marketing or is it genuinely an under-performer? With these questions boggling our mind, we went ahead and procured a test bike to see for ourselves, what Suzuki had in store this time around. Read on to know more…

We take the Suzuki Slingshot on a ride through the urban jungle to find out if people really go ‘O!’ looking at it like the commercials claim…

Every once a while, we automotive journalists tend to find appreciable virtues in even a bad product. And in most cases it happens if the maker of that particular machine is of an international repute and has given the world some great automobiles. Suzuki, for me in one such manufacturer – it has given the world some absolutely wonderful motorcycles such as the GSX-R1000 and the ‘Busa. And it’s solely for that reason, that I am somewhat feeling bad after having ridden this machine. Quite clearly, the Slingshot has not impressed us at Motoroids much, but I still somehow don’t feel like lambasting this product. Suzuki as a two wheeler brand has been rather unlucky with most of their products. Though the bottom end of its portfolio – the Access, and the Hayabusa at the top are doing fairly well, the rest of their motorcycles have enjoyed little success. Blame it to better competition, optimistic pricing or a bad product itself – the Suzuki Heat, Zeus and GS150R often come across as a bunch of destitute children sadly sitting in the corner of the field. So here I am, trying to overcome the overwhelming feeling to talk about the negatives of this optimistically christened bike and write a review which doesn’t turn out to be deriding for the brand or the new motorcycle. Here goes…

Simply put, the Slingshot’s design looks too good for a 125cc commuter. Like its predecessor, the Zeus, the Slingshot doesn’t try to blend its own recipe of the Hero Honda ingredients to give the commuters a Suzuki badged Splendor Pro. Instead, it uses some new age design language like a floating crown, minimal bikini fibre, a rakish headlight, sculpted and meaty fenders etc. The side and tail panels gel seamlessly with each other and add to the muscular avatar of the Slingshot. The tail with the large panels and a tiny taillight in the centre is reminiscent of some of the older and bigger Suzuki motorcycles sold abroad. Suzuki has paid attention to detail with body coloured plates on the grab-rail, a rakish belly pan under the engine and a designer heat guard for the exhaust muffler.

The engine, which is the exact mill as the Zeus, right down to the engine casing, is finished in gloss black to match the equally glossy chassis elements and the matte black alloy wheels. Speaking of which, we were pretty excited about the design of these alloys when we first got the spy shots over a year ago and today we love it even more, to see the entire bike balancing itself on them. However, the lack of a disc brake hampers the overall look of the Slingshot.

The Slingshot’s tank is muscular, like the bigger GS150R, but the knee recesses are totally pointless considering the hardcore commuter seating posture. Suzuki could have instead given a bigger tank and increased the range of the vehicle – even with its current design it looks disproportionate as compared to the skinny front end anyway, so a fatter tank wouldn’t have made it worse. Oh sorry, I promised I would only say good things about the Slingshot. The Slingshot offers a simple console with analogue read-outs for the speedometer, odometer and fuel gauge. Like the Zeus, the Slingshot too gets a gear indicator which tells you which gear the bike is currently running in. Now generally bike makers incorporate a bright LED for the reserve fuel indication and it is pointed right at your eyes to attract your attention and tell you that the bike is running low on fuel. For some odd reason, Suzuki has done the similar thing with the gear indicator as well –why?? Oh, sorry again.

<<<Back to table of contents | Engine, Ride and Handling >>>

The engine is one department where the Slingshot absolutely shines! No, not because it uses glossy paint, but because it is a very refined mill with butter smooth gear shifts. Since it is the same mill that comes from the Zeus, it maintains its trait of providing a strong low end grunt. The 125cc mill produces a disappointing 8.5 horses at 7,500 rpm – even a Yamaha YBR produces 11 bhp! The peak torque figure is 10 Nm which is dialed in at 3,500 rpm. This gives the Slingshot the perfect amount of torque to skim through city traffic without needing to change gears frequently. Within the city limits, the Slingshot manages to return a decent 55-58 kilometers to a litre of petrol.

Take the Slingshot onto the highway and the little Suzuki trembles with fear. The slightest hint of headwind can start upsetting the bike even if you are maintaining the highway speed limits. The engine, which is tuned for a strong low end, feels lifeless at the top. If you do connect to this bike and understand the feedback it is giving you, you are bound to hear something like ‘I wanna go hooome’ or ‘I’m afraid of the open roads, please take me back’, you know what I mean.

But no matter whether you are on the highway or in the city, the ride quality is mediocre. It is on par with what you would expect from an entry level commuter – which is enough for home and office commutes and a weekly trip to the grocery store. Then there is the braking. The Slingshot in both its variants comes only with drum brakes (front and back). The braking process from these drums is spongy, lacks feedback and for some odd reason, sends judders up the handlebar under hard braking. The Ceat Centra tyres (F: 2.75, R:3.00) further deters the handling capabilities with compromised grip. Our test bike had done hardly 200-odd kms and the tyres were already sliding around and squealing under braking. Overall, the Slingshot doesn’t feel as taut and sturdy as some of its well established competitors and hence it is recommended that one doesn’t get carried away by its jazzy name. It does its commuter duties well and that’s exactly how it should be enjoyed – as a commuter.

Overall, the Slingshot feels like a half-hearted effort from Suzuki. While the GS150R was genuinely a good bike which failed to take on its competitors, the Slingshot genuinely doesn’t have the firepower to blow away the competition. It does a fairly good job in the styling department but the aggressive street-fighter front end and drab and bulky rear might not go down well with the commuter crowd. There is no disc brake yet, but even without one, the pricing crosses the 53,000 rupee mark – which takes it closer to some of the higher specs Bajaj, Yamaha and Honda bikes. The word ‘Slingshot’ is associated with the GSX-R750 and this commuter is far away from it – be it legacy, styling or anything else for that matter. In the automotive enthusiast’s dictionary however, the word ‘Slingshot’ means getting into the slipstream of a faster vehicle, using its aerodynamic drag to your advantage to get a marginally better speed and making an overtaking manoeuvre. In this case, this 125cc commuter uses the Zeus as the vehicle to slipstream behind and hence the resultant Slingshot that you get is a marginally better product than the Zeus – which in itself has been a failure. We sincerely hope that, it does the company some good…

<<< Back to table of contents