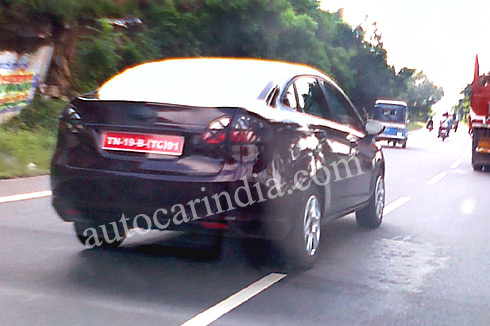 Our Friends at ACI has managed to spot the sedan version of the new Fiesta, the hatchback version of which has been testing for more than one year on the streets of Chennai. As expected, the new car is bigger and much better looking than the current Fiesta.

In its newest avatar, the Fiesta is expected to be powered by a 1.6-litre petrol engine producing 118bhp and a 1.6-litre TDCi diesel that dishes out a 90 bhp of power and more than 200Nm of torque. Both the engines are expected to be mated with a 5-speed manual gearbox as well as a dual-clutch auto ‘box, somewhat similar to VW’s DSG for quick, responsive shifts.

Design wise, the new car should put Ford right at the top with its crisp, athletic line, influenced by Ford’s Kinetic design philosophy. We have seen the hatch version of the Fiesta testing here many time, and the sedan version too seems to be a very hadsome looking machine. The boot has been incorporated rather well.

The new Fiesta sedan has been testing quietly for a very long time in India, and it’s almost ready to be launched. We should expect the car to arrive in the showrooms by February 2011 with a price tag varying from Rs 6.5 to 8 la