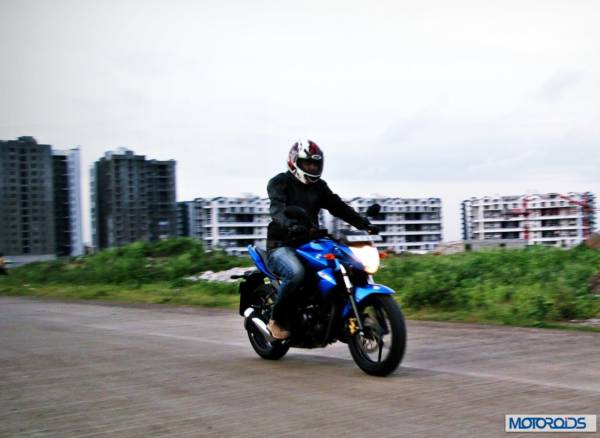 “What’s in a name?” asks Shakespeare in Romeo and Juliet. Quite a lot, as it turns out. There are names that conjure up a certain image or feeling, either negative or positive. This is why you would think twice before naming your kid something fancy like Gandhi or Jesus. Or, on the flipside, Hitler.

Thing is, just the simple act of christening a child or, in this case, a product somehow brings along with it expectations as great as what its namesake brethren may’ve had. 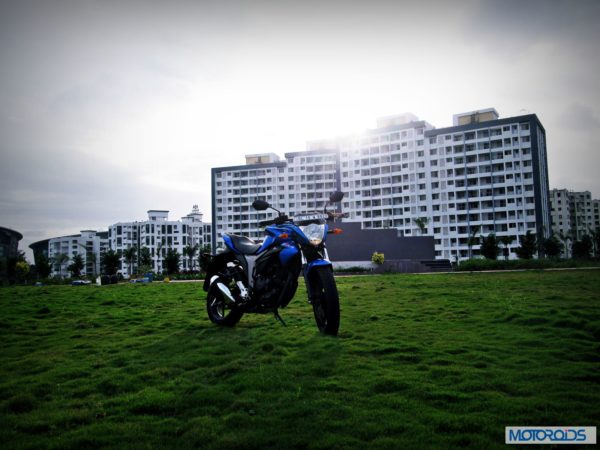 Which is why we were quite surprised when, at the Auto Expo earlier this year, Suzuki Motorcycles India introduced us to their all-new 150cc offering with the name “Gixxer.” That’s right, not even a “150” suffix or prefix, just “Gixxer.” Short and snappy, but also evoking immediate throwbacks to one of the reigning kings of the litre-class superbikes – the mighty Suzuki GSX-R1000.

So yeah, with a name like that, the Suzuki Gixxer does have some rather large boots to fill. Will it do so, or will it be a misfire for Suzuki’s product marketing and naming department? 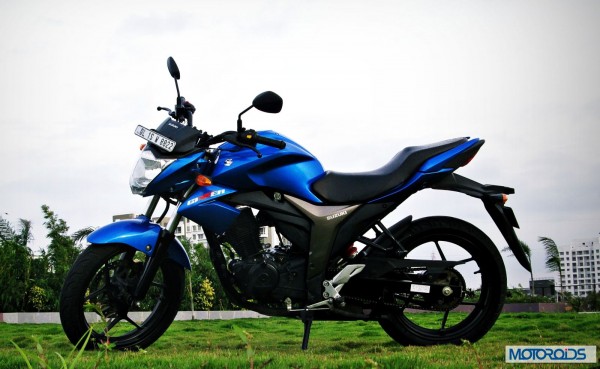 On pure design grounds, the Gixxer is a winner, no doubt about that. Sure, it is a naked streetbike with no supersports leanings, but it is a looker through and through. Suzuki has finally decided to ditch the safe and conventional route and the end result is an aggressive-looking motorcycle that looks fast even while standing still. 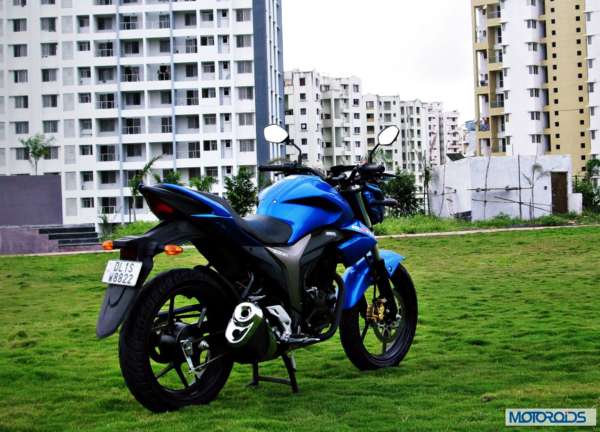 Part of this big-bike appeal goes to the twin-port exhaust, and the faux air scoops above the engine. The 12-liter fuel tank is gorgeously sculpted, and is complemented brilliantly by the plastic tail panels with body-coloured pillion grab rails. The mudguard hangs too low, but, fret not, part of it can be removed, in case you don’t encounter rains and muddy roads on a daily basis, or just want to show off that fat 140-section rear tyre (on Y-spoked alloys) to maximum effect.

Styling is a subjective thing, but I honestly feel that the Suzuki Gixxer is the most handsome 150cc street bike I’ve ever seen in our country, and possibly overseas too. But that applies only if you will allow me to remove the full rear mudguard and the unsightly bits and bobs forced upon us by Indian government rules from the equation. 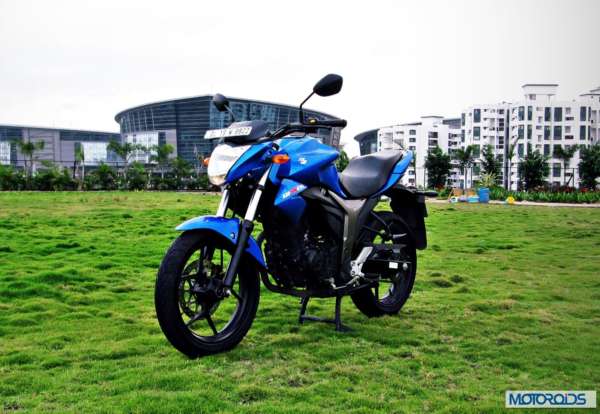 Suzuki has loaded the Gixxer with everything but the kitchen sink when it comes to instrumentation. You get a fully digital red backlit console that, other than the basics, also feature a gear indicator, clock, service indicator, and two tripmeters. Two innocuous rubber buttons under the panel cycle through the menu, and adjusting any parameter was intuitive enough to be learnt in one try. There’s also a bright white indicator that lights up whenever you approach the 10,000rpm limit. All the electricals run on DC power, so you get ample illumination no matter the revs you’re doing.

On the handlebars you get an engine kill switch, a pass switch and a manual choke, handy for cold starts. Switchgear quality is a bit of a downer, and there are noticeable gaps between the fake bar-ends and the handlebar grips that detract from what is otherwise, a bike that looks and feels very high end. 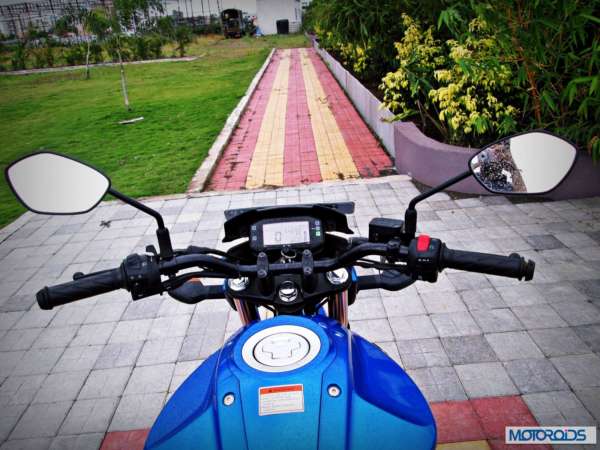 A small part of this high-end feel can also be attributed to the GSX-R inspired key. The mirrors have been designed more for style than real-world usability – they serve their purpose but the vision is nothing life-saving. Also not life-saving, but definitely welcome is the aircraft-style fuel filler cap. The kick-starter has no rubber cladding, and has an unfinished look to it, although we suspect not many customers will be using it as the bike fires up on the first thumb of the starter even in the coldest of conditions. A half chain cover and chrome exhaust shields round up the look, but we would’ve preferred fully metal footpegs for the rider, just like the pillion has.

Features and details of the Suzuki Gixxer 155 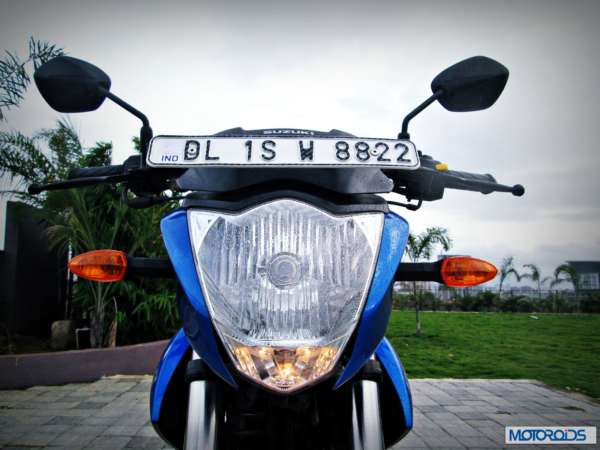 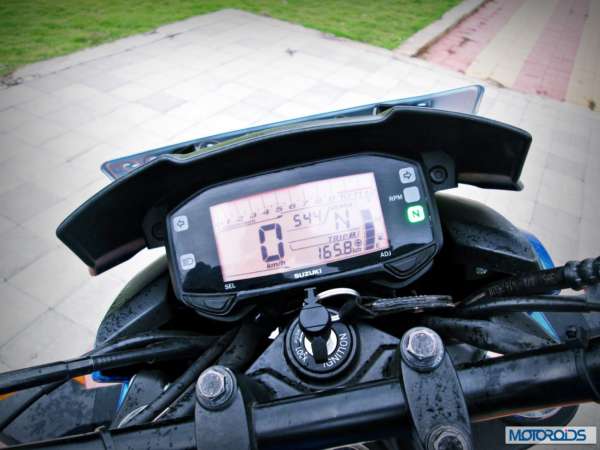 The all digital instrument cluster has every feature you can think of, and then some

The reach to the handlebar is perfect. Switch gear quality, however, is a bit of a let down 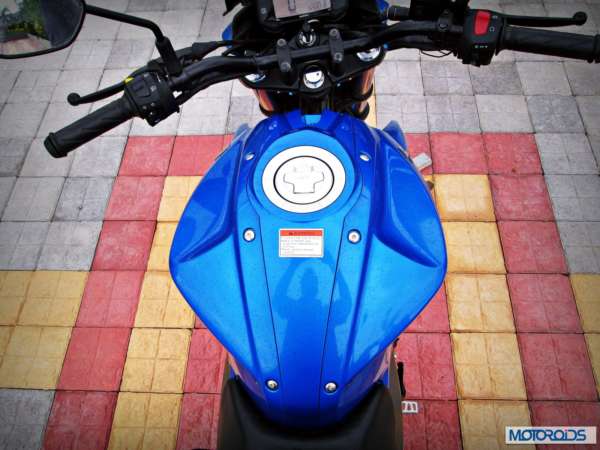 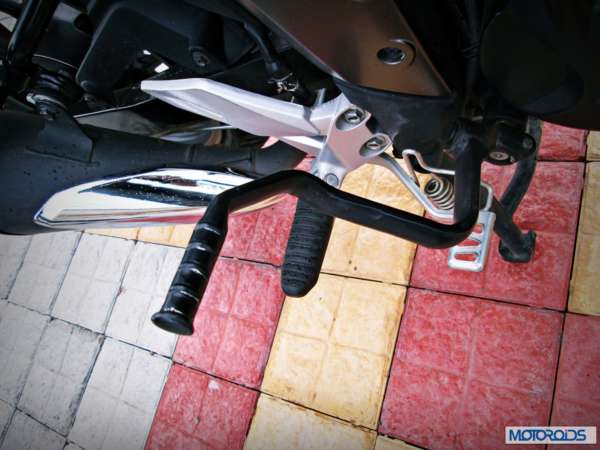 The kick starter looks unfinished. Not that you would be using it often anyway 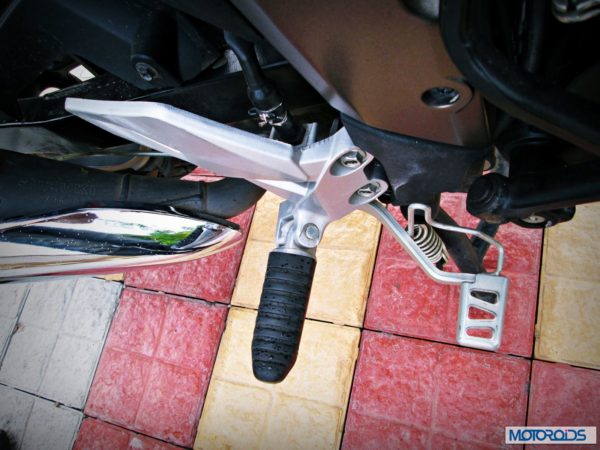 Nifty toe guard on the brake lever is a nice little touch. 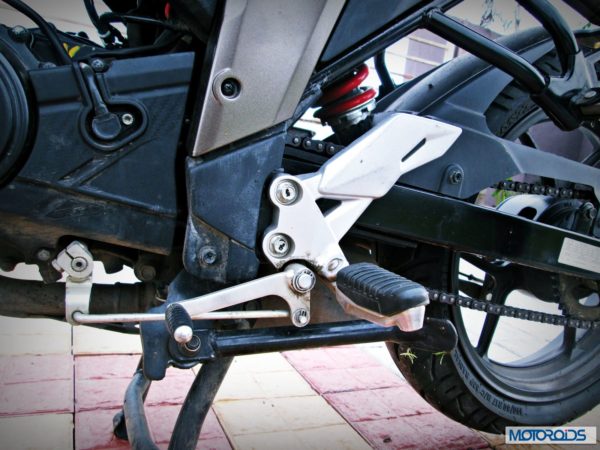 The rubber mount on the rider foot peg are totally unnecessary – it is that smooth. 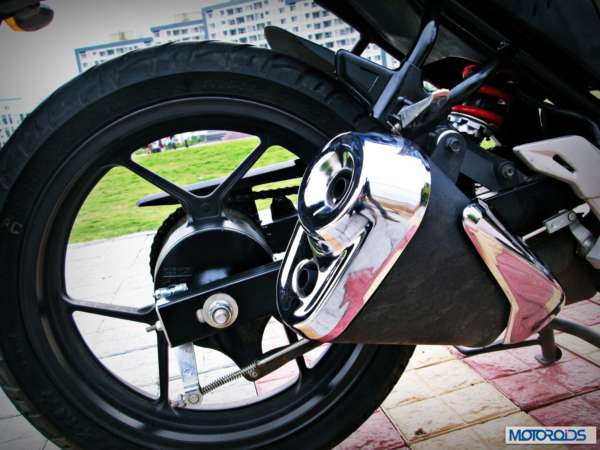 Chrome twin port exhaust is a first in its segment 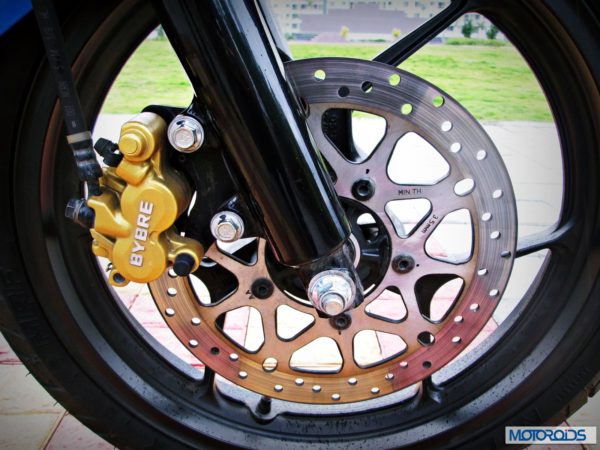 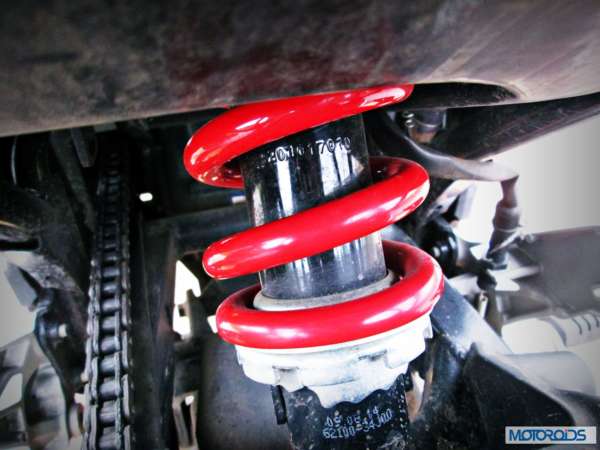 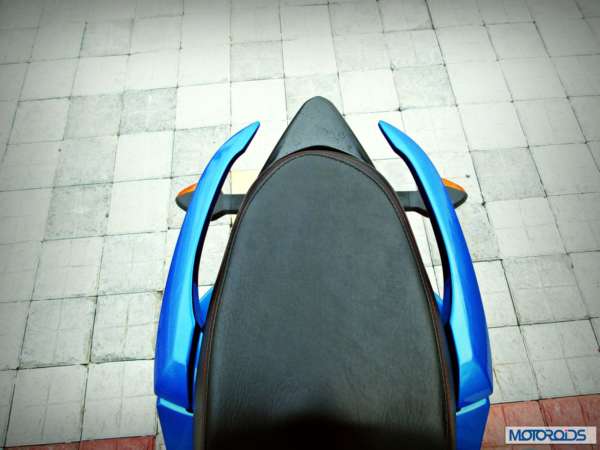 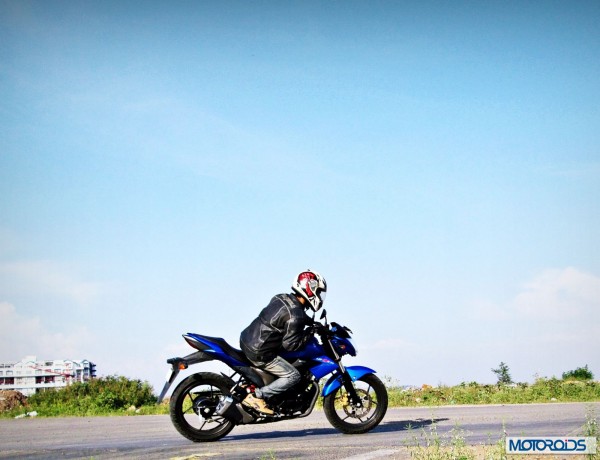 Click here to read about Engine, Transmission and Performance>>> 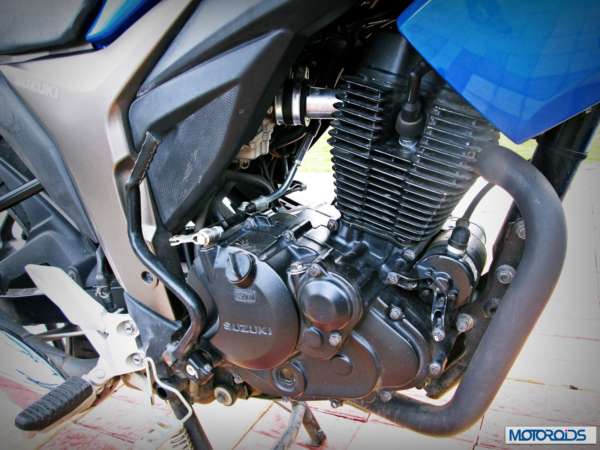 Powering the Gixxer is a carbureted 4-stroke, air cooled single cylinder, SOHC, 2 valve engine displacing 154.9cc, pumping out 14.8PS of peak power at 8000 rpm and 14Nm of max power at 6000 rpm. That figures make it the highest in its class, and, coupled to the 135 kg kerb weight, ought to endow the Gixxer with some respectable grunt.

And it does. The gearing is on the slightly tall side, for efficiency and top speed reasons, we guess, but the power is spread so evenly that you won’t be feeling it unless you are timing it with a chronograph. We are disappointed at Suzuki has chosen to go back to a 5-speed gearbox, especially after experiencing the butter smooth 6-speeder on its older – and less sportier sibling – the GS150R. Sure, the sixth gear on that bike was little more than a cruising gear, but it just felt oh-so-nice. This one is still smooth though. My colleague, Rohan, experienced some false neutrals in motion, but I didn’t encounter a single one during the week that the Gixxer was with us.

Like most Suzukis, the Gixxer is a supremely refined bike without a hint of vibration even near the 10,000 rpm redline. They could’ve just done away with the aforementioned bar-ends and the rubber grips on the rider’s pegs – it’s that smooth. 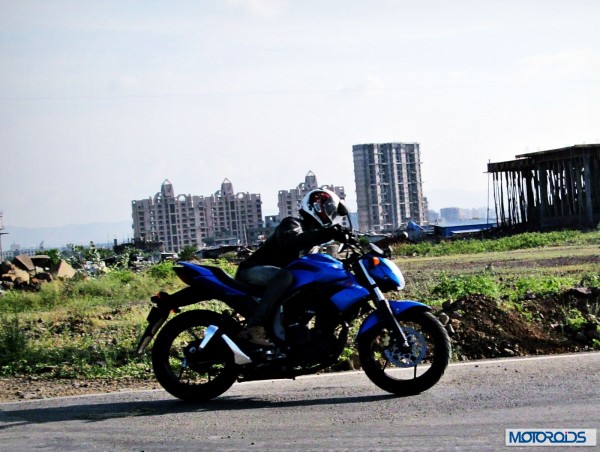 Swing a leg over the low 780mm seat, and the Gixxer feels more substantial than it looks. Snick the gearbox into first, give her a little juice, let go of the smooth clutch and she takes off with a shrill buzz from the twin-port exhaust. The exhaust note is quite a pleasure to hear, and gives the Gixxer a big-bike feel that is accentuated by the riding position and the view of the all-digital instrument cluster.

From standstill, the Gixxer will sprint to 60 kmph in 4.3 seconds. Keep the throttle pinned and the ton comes up at 15.3 seconds. These figures are substantially better than what its closest competitors have to offer and it is easy to see where that added horsepower and torque has done their job. The acceleration decreases rapidly around the 105 kmph mark, but given a long enough stretch of road, you should see 119 kmph on the speedo. Or a few kmphs less considering I weigh a paltry 52 kgs and have aerodynamics to my advantage. 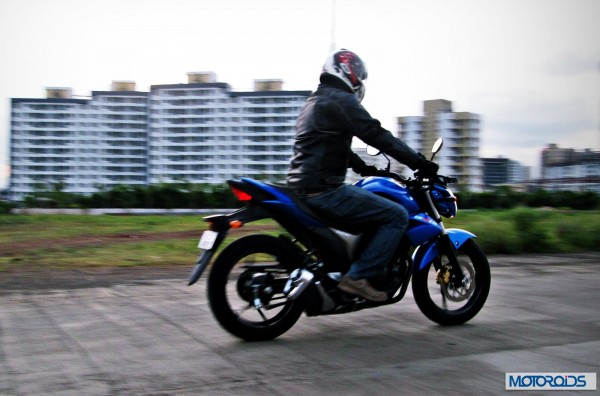 A 266mm diameter disc with twin-pot calipers, courtesy Bybre, and 130mm drums at the rear handle braking duties at the front and rear respectively. We would have loved a rear disc setup, at least as an option, but the current setup does its job well. The disc lacks initial bite but has a nice progressive feel to it as you clamp down that lever harder. The rear, despite being a drum unit, holds up well under hard braking, thanks in no small measure to that massive 140mm tyre. It would take some really wild panic braking to unsettle this firm-footed motorcycle. 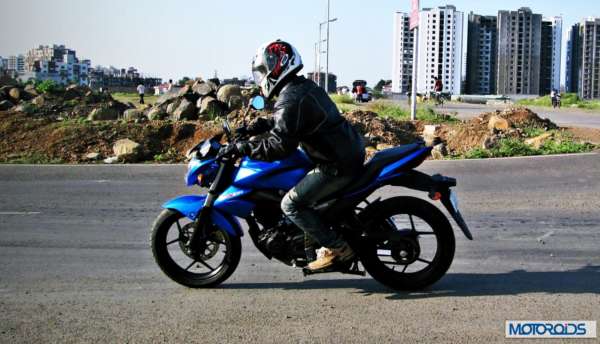 In our test, the Gixxer consistently returned a fuel efficiency figure of around 44 kmpl, with 70% of the testing being done on highways and 30% in Pune’s chaotic traffic. Keeping in mind that this is a thrashed-from-new bike, normal riding should return something above 45 kmpl unless one has a naughty right wrist. Suzuki’s Eco Performance (SEP), a technology first seen on the company’s Let’s scooter, that minimizes mechanical losses as much as possible without compromising fuel efficiency, might have something to do with this. Coupled to the 12-litre fuel thank, this gives the Gixxer a hypothetical range of 540 kilometres between fuel stops.

Click here to read the Ride, Handling and our Verdict on the Suzuki Gixxer 155>>> 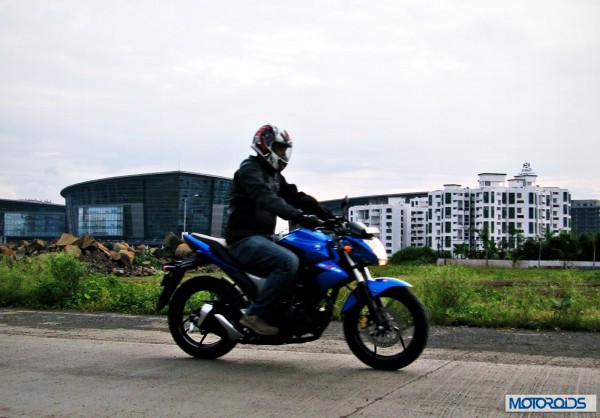 With meaty 100/80-17 and 140/6017 MRF tyres held in place by fat 41mm telescopic forks and a directly mounted monoshock at the front and rear respectively, the Gixxer is a sure-footed, if not particularly nimble handler. While the tyres are of the same width as the competition, they have a more rounded profile that imparts more grip in corners.

Slightly leaned forward ‘bars makes tipping it into corners a breeze, and there is enough feedback from the 1330mm wheelbase chassis to induce confidence to keep that throttle open for just a little bit more. In keeping with its sporty leanings the suspension is set up on the firmer side. Dialing down the preload on the seven-way adjustable monoshock improved the ride quality noticeably and before long, I was zipping along Pune’s less than perfect roads barely slowing down.

As any experienced rider will attest to, changing gears mid-corner for maximum thrust is one of the banes of our low capacity bikes here in India. It shifts the point of traction and renders the whole bike momentarily unstable, but that moment might prove costly if you’re on wet or less grippy road surfaces. And that’s the reason why I appreciate the Gixxer’s flat torque curve in the corners even more than while I was performing the straight line acceleration tests. Holding a tightening line is easy and the knee recesses on the tank allows you to grip the outer side and hang onto the bike. The only downer to this impressive package was the foot pegs scraping at tight turns, but that’s more a compliment to the abilities of the Gixxer than a complaint. 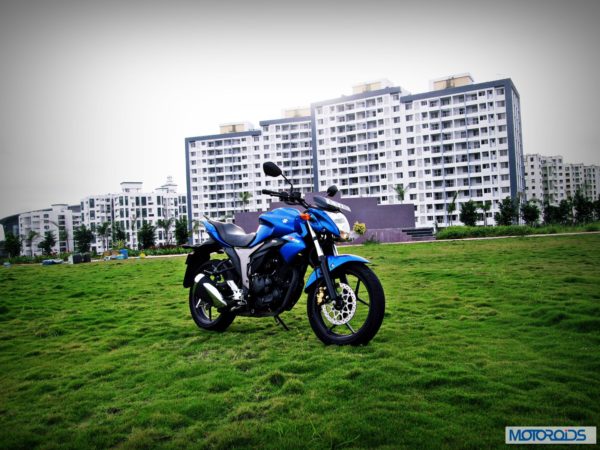 In normal city riding, the Gixxer feels roomy and you can slide around on the seat to find your perfect riding position. The reach to the handlebars is perfect, but the bars themselves are angled quite wide out, which put a weird strain on my wrists that I haven’t felt even on purebred sportbikes. With a seat height of just 780mm, the Gixxer is perfect for shorter riders, enabling flat feet stops at traffic lights. The pillion seat with its red contrast stitching is well padded and roomy enough even when Rohan and I were travelling two-up with our respective backpacks, laptops and all. It is not something you’d want to ferry saree-clad elderlies on, but will suffice for everybody else.

Despite being stellar products, Suzuki’s previous offerings haven’t exactly set the market on fire. As mentioned before, Suzuki this time have ditched their safe-and-conventional route and gone back to the drawing board for the Gixxer. The end result is a bike that doesn’t just stand out in what is, frankly, an already saturated market, but also teaches them a thing or two. It is stylish, fast, comfortable, decently frugal, and is packed with goodies to boot. 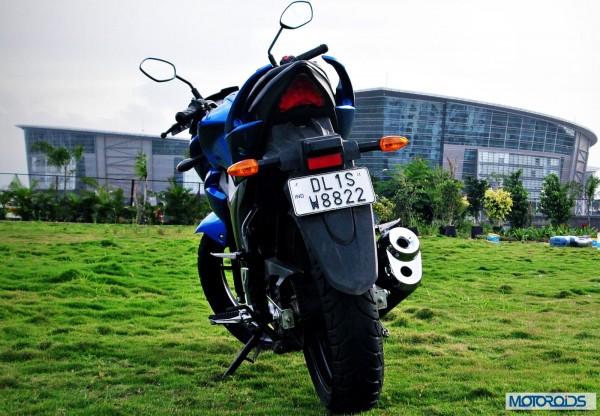 With an on-road price of INR 81,900 (Pune), the Gixxer also undercuts its closest rivals by around 5000 bucks. Five colours, Metallic Oort Grey, Candy Antares Red, Glass Sparkle Black, Pearl Mirage White, and Metallic Triton Blue (the one you see in the pictures here) are on offer, and there are no garish graphics whatsoever on the bike to hide that gorgeously sculpted body panels, just the way we like it.

“What’s in a name? That which we call a rose. By any other name would smell as sweet”. Shakespeare was right, the Suzuki Gixxer is indeed a sweet-smelling package worthy of its big name.

Here are the technical specifications of the Suzuki Gixxer 155

Here is the complete image gallery of the Suzuki Gixxer 155;