Lakshay Anand, a young YouTuber Vlogger who is currently riding from Kashmir To Kanyakumari, recently caught a Traffic cop accepting bribe from a motorcyclist on the Mumbai-Pune Expressway. Anand, who was riding to Goa from Mumbai, accidentally continued on the Mumbai-Pune Expressway which is reserved for cars and trucks. The mistake, as told by Anand in his video log, happened due to Google Maps. 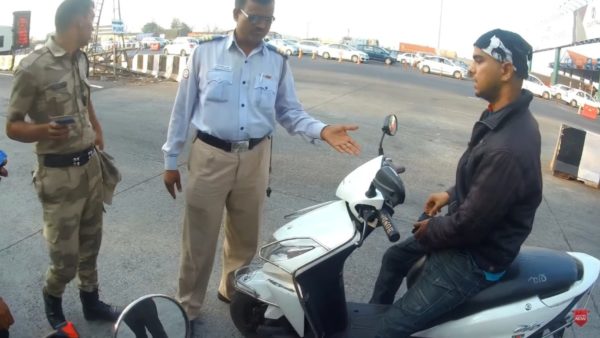 Anand, and his fellow rider, were stopped at the toll-post by Traffic cops and were asked to pay a fine for breaking the law. After trying to convince the traffic cops that they didn’t intentionally ply the Expressway, Anand agreed to pay the challan. Meanwhile, another motorcyclist was stopped by the cops at the toll-post for riding on the Expressway (and without a helmet). The motorcyclist allegedly passed a INR 100 along with his license to the traffic cop as a bribe to let him pass. The entire incident was caught on the helmet mounted camera. 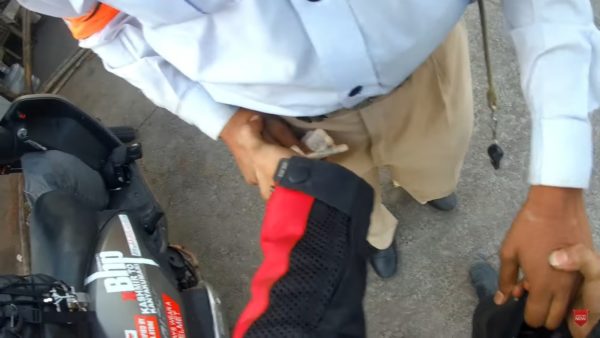 Check out the incident in the video below:

In case you’re wondering, Lakshay Anand is the same young rider who rode to KhardungLa Pass on his TVS Jupiter 110cc scooter and toured Nepal and Bhutan on a Aprilia SR150. As aforementioned, he’s currently riding from Kashmir to Kanyakumari on his scooter.