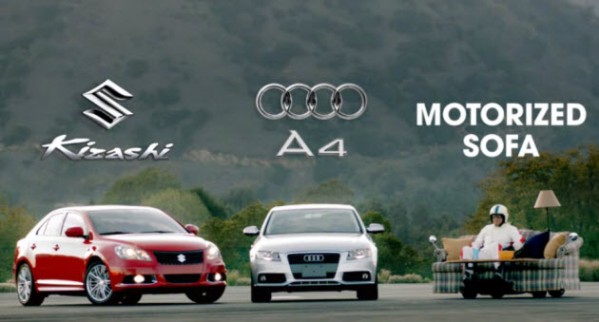 In a rather bold move, Suzuki have started a new series of commercials where the company is pitting their Kizashi sedan against premium cars such as the Audi A4, Mercedes C-class and the Volvo S40. The videos claim that the Kizashi is better than these cars on various parameters such as handling, cornering, safety etc. The new ad campaign will be aired from around Christmas. We are sure that the auto journalists from the parts of the world where the new ad campaign is aired would be keen to find out the truth by themselves. Hope to see their reactions on Suzuki’s tall claims soon.
In the meantime, watch these funny commercials (somewhat on the lines of TG’s spoofy videos), and let us know if the claims sound credible. These videos are a part of a bigger ad campaign called Suzukikicks. You can visit Suzukikicks.com and read / see more such videos there.