Going on bike rides in groups is the way of relaxing for some. But sometimes, pushing your bike ton the limits can nearly kill you. In this video, a group of riders are riding down some a dual carriage way at a good speed. At a corner, a biker runs wide and in order to avoid crashing into an oncoming SUV, he chooses to go to the left shoulder. But with the speed he is doing, he ends up crashing into a bank with both the bike and the biker flying up in the air. 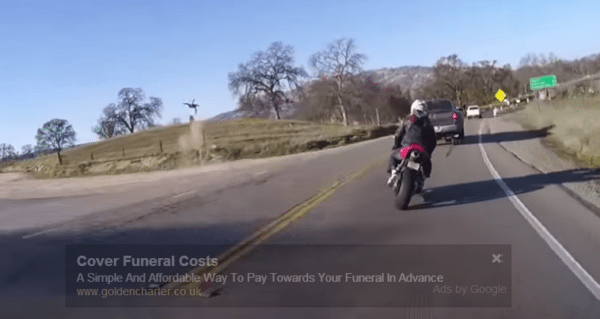 The video is shot form the helmet camera of the brother of the biker who crashed. Upon seeing his brother crash, the biker stops and tries reaching him. Sadly, there is a barbed wire compound inside which his brother is on the ground,injured. He tries uprooting the compound but then he sees there is a space for him to go inside.

He runs to his brother but let us warn you- this might be disturbing for some viewers. Another guy reaches there to hep the injured biker. As per reports, the biker only suffered some minor injuries even after being thrown up high in the air.