Royal Enfield has been hitting it out of the park with their new 650cc twins. But they aren’t resting with the other models in their portfolio either. Their very popular ‘Classic’ range of motorcycles is about to get new members in the form of the Royal Enfield Classic Scrambler 500 and 350. Spied during a road test recently, the Classic Scrambler will most certainly be launched in the first quarter of 2019. 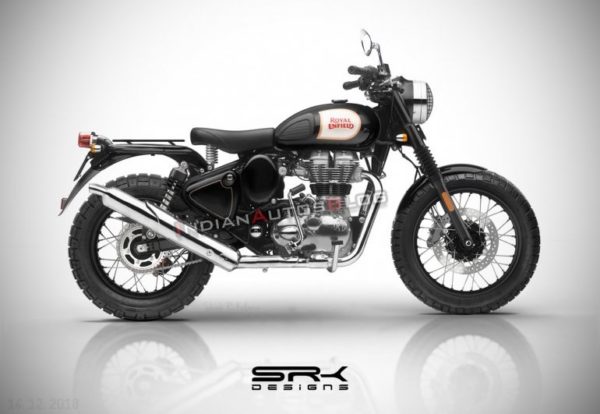 A digital render of the motorcycle has surfaced online, which gives a good preview of what to expect from the upcoming motorcycle. Pictures of the test mules suggest that the fuel tank, chassis, side panels, the headlight nacelle and the rider’s seat will be similar to the existing Classic range. However, the Classic Scrambler, just like this render suggests, will get modern telescopic forks with more travel. Although this virtual artistry imagines a flat handlebar, the test mule was fitted with a taller handlebar with a centre brace for enhanced sturdiness, like the one on the Interceptor 650. 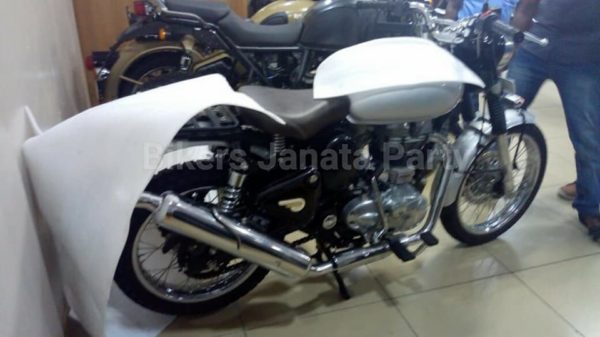 What the Royal Enfield Classic Scrambler will also get is braces for the front fender, 17″+ spoked wheels wrapped around in knobblies, and an exhaust pipe which is similar in design to the one on the existing classic range, but gets bent in the centre to point upwards and gets a longer tip towards the end. The rear fender is shorter, gets a plastic extension to contain wheel spray, and the tail light cluster has been borrowed from the RE twins. The rear seat could either be removable or optional, in case the Classic Scrambler likes its rear luggage rack as standard. We expect spring rates to be firmed up, especially at the back, and maybe, the 350 and 500 cc motors could be slightly tweaked for power delivery. We’ll bring you more updates in the run up to the launch of these two new motorcycles. Stay tuned!