Until now, the Ntorq 125 was the only TVS which could boast of a unique, Bluetooth-enabled display in front of its other race-inspired siblings. Now, the TVS Apache RTR 200 4V has gotten one for itself too. Along with the connected, all-digital instrument cluster, the bike now also gets a gold-finished racing chain. The Bluetooth-enabled TVS SmartXonnect technology of TVS Apache RTR 200 4V is paired with the TVS Connect App, which is available on Google Play Store and iOS App store.

The TVS SmartXonnect tech has key unique features like – Lean Angle Mode, Race Telemetry and Crash Alert.  While the Lean Angle Mode uses the gyroscopic sensor on the phone to record the rider’s lean angle through the corners while displaying it on the cluster, the Race Telemetry records and summarises essential data at the end of every race or ride. Crash Alert System is a safety feature which is triggered when the bike senses a fall.  The system enters crash alert mode and within 180 seconds notifies the rider’s emergency contacts with the location of the fall. 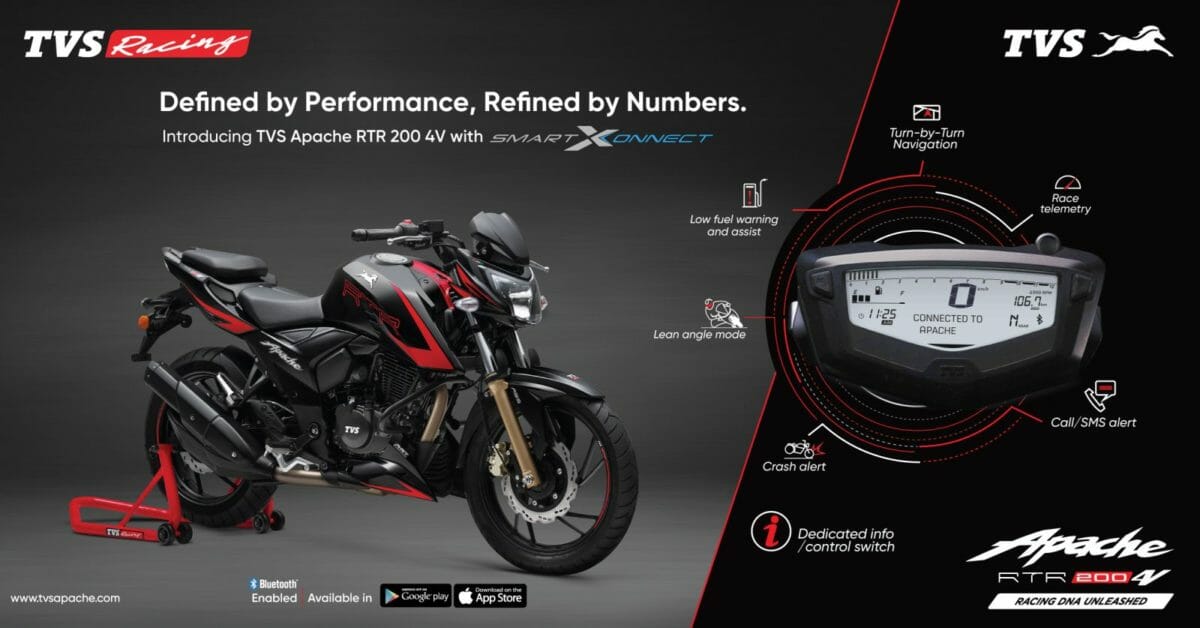 Powering the TVS Apache RTR 200 4V is a 197.75cc single-cylinder motor which is mated to a 5-speed gearbox. The engine cranks out 20.5 PS (Carb) of power at 8500 RPM and 18.1 Nm of torque at 7000 RPM. This is still a BS-IV version of the engine and a BS-VI model is currently being worked upon. We believe this feature will be carried on to that new model, along with some minor cosmetic changes which could happen in the form of LED lights and slightly redesigned panels. However, expect the BS-VI Apache RTR 200 to cost slightly more than this BS-IV model.