In India, we witness a lot of after-market modifications on-road, although some of them might not even be road legal. The affiliation is more towards off-roaders. Customers want their cars to look rugged, tough even if functionality wise, they don’t stand near true off-roaders.

So what about machines which are already very capable off the tarmac? Do they undergo some modifications? The answer is yes they do and in large numbers. We often see capable SUVs being turned into monster vehicles to give their SUV the ‘Badass’ element. The example discussed here is that of Toyota’s Fortuner. 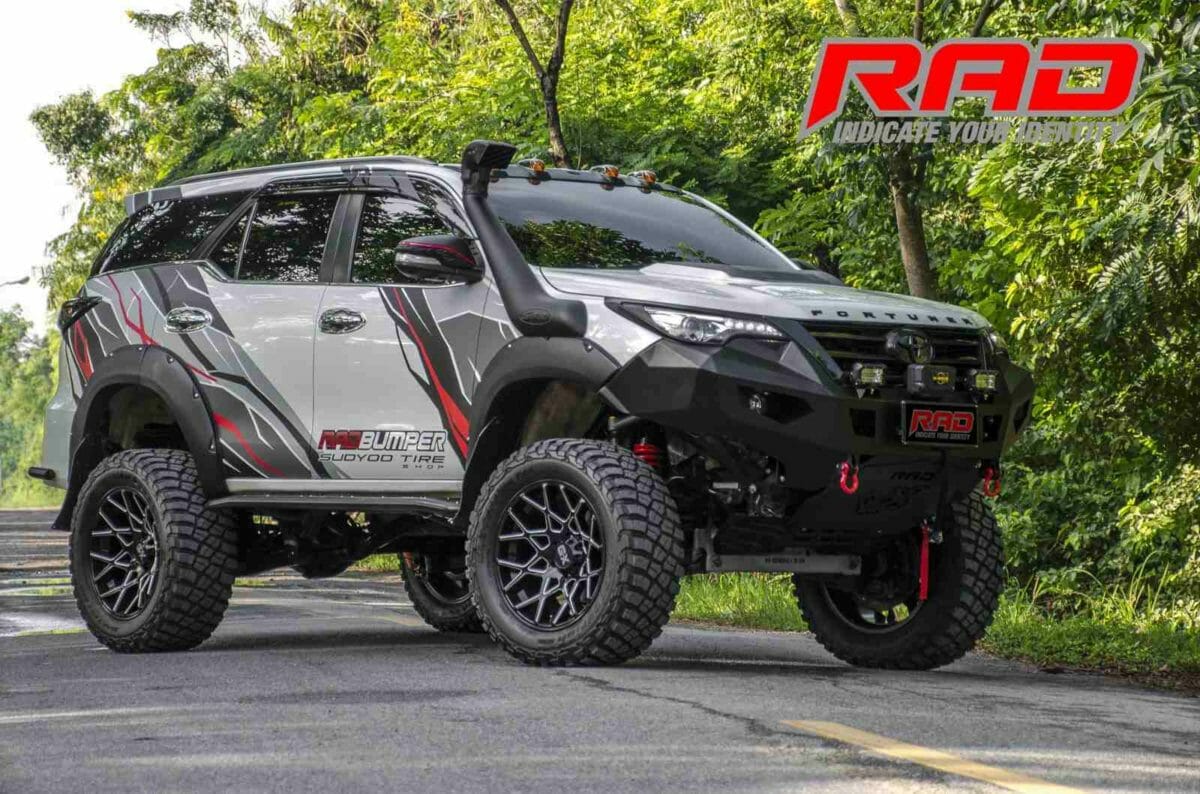 Now, it is very well known that the Fortuner is one of the most loved full-size SUVs in the South-East Asia region including India. The attributes that make it quite special and truly valuable are the reliability on offer and its undoubted off-road prowess and prescence. The Fortuner, over the years, has proven itself to be an ideal true blue SUV, through its unmatched off-road capabilities.

Here is an example where the Fortuner is given a whole new face, courtesy RAD Bumper Headquarters, an automotive design shop based in Thailand. The designer has tried to make it look like a monster vehicle that has been successful to a certain extent. There are a host of changes in terms of design which is rendered in this modified Fortuner.

Updates On The RAD Fortuner

The most noticeable changes witnessed are at the front with the stock bumper being replaced by a bull bar front bumper. Also altered is the front grille which now reads the big badging of ‘RAD’ in bold letters. The bonnet consists of a hood vent that looks quite neat. At the side, a snorkel is fitted so that the engine could breathe in clear air. Also at each side, one can notice the black fender wide bodies that are placed at the wheel-arches. 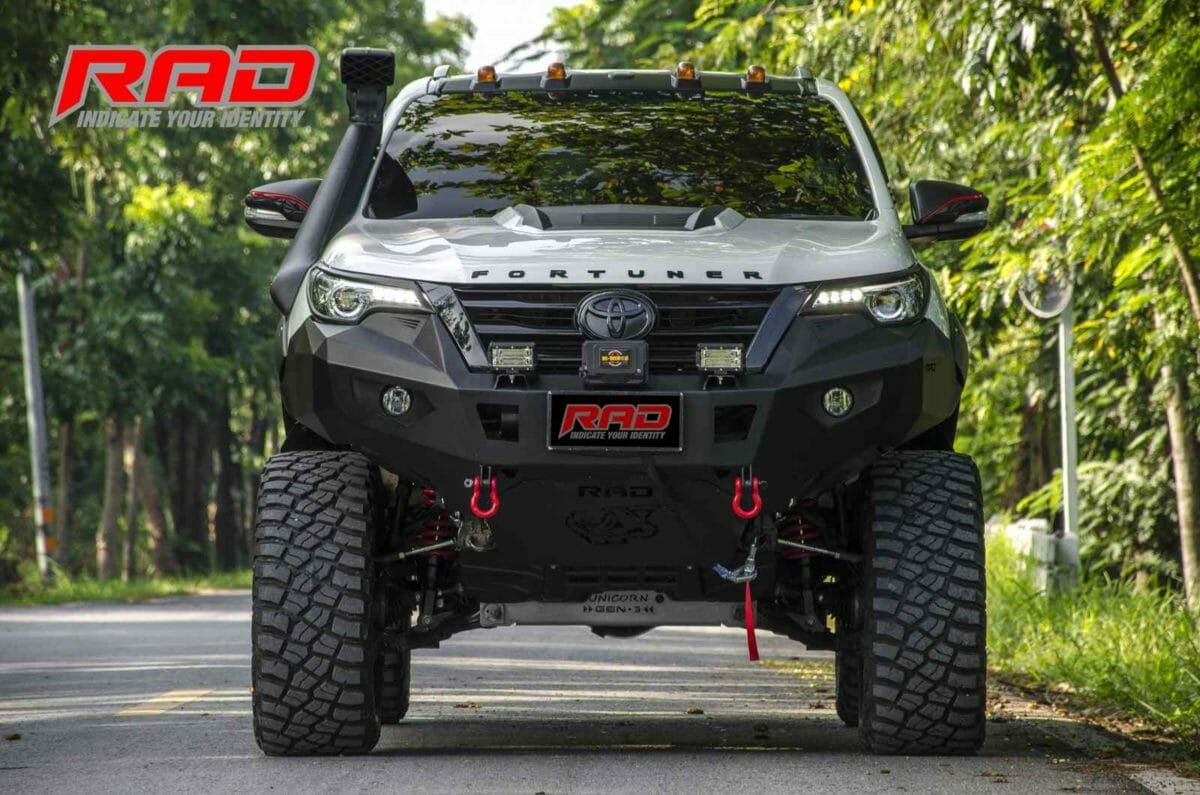 Another major point of change noticed are the humongous tyres. Now, the specification of the tyres is not known because the exact specification of this model is not revealed by the designer, however, we guess they are at least 22-inches with a very wide profile. Apart from this at the top of the windshield, there are small lights resembling those of sirens.

However, the major highlights are the updates in the mechanicals. The entire suspension setup is modified. From what we can see from the images, the designer has incorporated a front lift kit suspension from Unicorn which increases the ground clearance of the SUV. Not only this, but this suspension setup also improves the approach and the departure angles of the Fortuner, thus further enhancing its off-road capabilities of the already capable SUV. 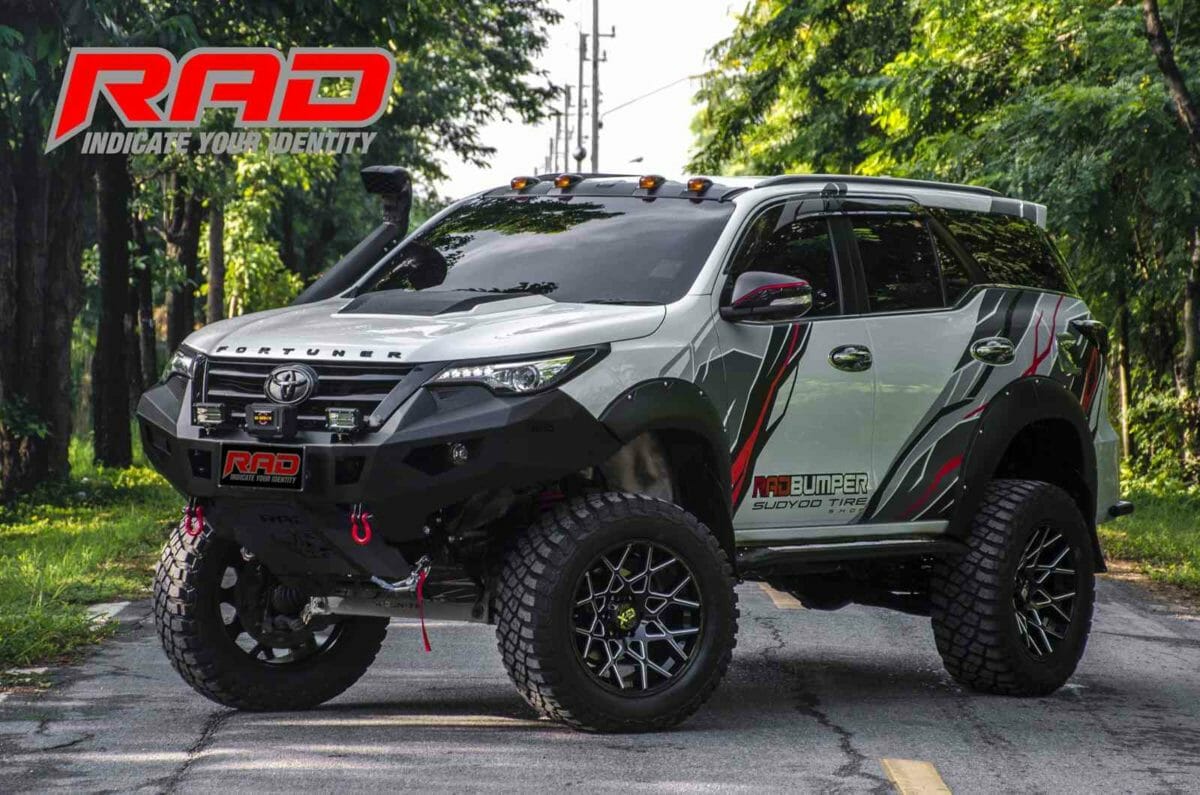 It also gets double front hooks at the front bumpers in case it needs to be towed.  Also at the front bumpers, two additional fog lights are added along with a device that looks like some sort of electronic impact sensor. Apart from all these updates, the SUV is given loads of decals and a fresh paint job with a combination of red, grey and black stripes. The designer must be credited for his effort as this model surely looks to conquer some unconquered terrains.