A new variant of the Bajaj CT100, with an added “B”, was recently spotted at a dealership. The motorcycle that would be majorly targeted by to tier 2 and tier 3 cities in the country, gets the most basic equipment such as spoke-wheels instead of alloys on standard CT100, a round headlamp sans the bikini-fairing and a black painted steel pillion grab bar with the attached carrier to name a few.

The space of the rear panel has been occupied by the seat. The triangular shaped tail light with round edges is quite different than the standard CT100. That being said, the motorcycle does come equipped with a spring in spring suspension. 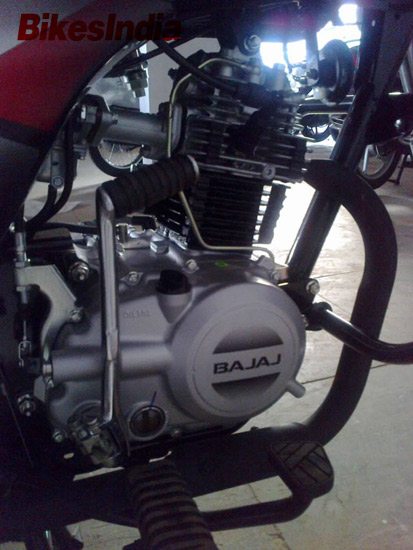 In terms of mechanical details, the Bajaj CT100 B is expected to be propelled by the same engine that powers the standard CT100. So expect to see a 99.27 cc single-cylinder air-cooled engine which delivers 8.2 PS of peak power at 7,500 rpm and 8.05 Nm of peak torque at 4,500 rpm and comes clubbed to a four-speed gearbox.

As we said before, the CT100 B will most probably be targeted to tier 2 and tier 3 cities. The standard CT100 is priced at Rs 35,034 for the spoke wheel variant and Rs 38,034 for the alloy wheel equipped model. The CT100 B, with its basic equipment, is expected to be priced slightly below the standard model.

While we await for an official announcement, share your views about the Bajaj CT100 B with us through the comments section below.

Here are some more images of the motorcycle: