A brand new Ducati Panigale V4 burst into flames as the owner was waiting at a traffic signal. The owner wrote on the Ducati Forum, “Just riding normally and smelled something burning. Looked down and it’s on fire. At a red light.”

Ducati North America was quick to respond and the owner got a replacement withing hours of the incident. The owner wrote, “Just got a call from Ducati North America. Gotta give them credit for their service though. They’re sending me a replacement right away. Will take my bike back for examination… I’m not blaming anyone as no one wants this to happen. I’m just very happy with Ducati’s level of service so far.” 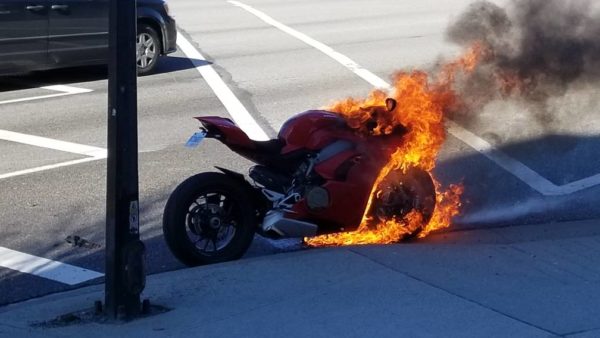 When asked whether the motorcycle had any modifications, the owner replied, “Not mechanically.”

The exact cause of fire is still unknown and Ducati North America is currently assessing the damaged motorcycle to figure out the culprit. We won’t delve into speculations and wait an official statement to know the cause of fire. You can read the complete thread on the Ducati Forum. 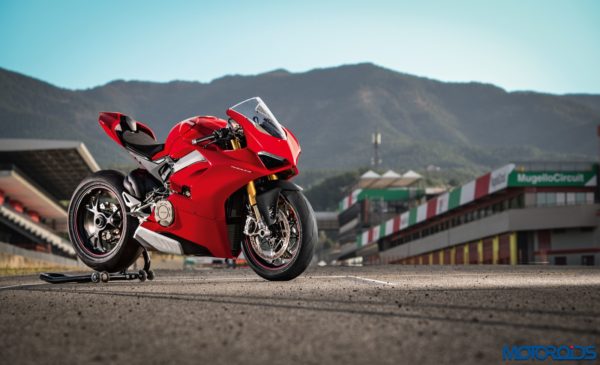 The Ducati Panigale V4 range was unveiled at the 2017 EICMA and was named ‘Most Beautiful Bike of Show’. The new Ducati Panigale V4 is the first mass-produced Ducati bike to mount a 4-cylinder engine derived directly from the Desmosedici GP MotoGP motorcycle. The 90° V4 with a displacement of 1,103 cc, the counter-rotating crankshaft and the 4 valves per cylinder with desmodromic distribution that reaches 214 hp (157.5 kW ) of maximum power at 13,000 rpm and 122 Nm (12.44 kgm) of maximum torque at 10,000 rpm.