We reported in detail when the new 2014 Ford Ka Concept was revealed in Brazil sometime back.

The latest concept will spawn the Ka successor for Europe and the Figo successor for India. Here we have some fresh details of the new 2014 Ford Ka Concept. 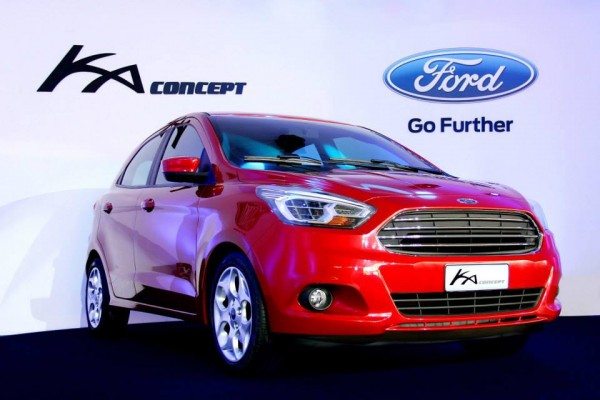 The new Ka Concept looks almost production ready and it would be safe to assume the production model won’t look too different from the design study. The car sports headlights that seem to have taken design inspiration from those of the Ford Escort concept. The grille reflects Ford’s latest design language and has more than a hint of Aston Martin in it. The car has some more design cues that remind us of other Ford cars, such as the Fiesta, Mondeo, et al.

It is being said that the production of the new Ka would commence in Brazil in March/April 2014 and the launch could happen sometime in May next year. For the Brazil car market, the new Ka will go on sale with two petrol engine options. One of these will be the 1.5-litre four cylinder unit that currently powers the Fiesta. For the new Ka though, the motor would be re-tuned to have a max power output of 111 bhp. The second engine on offer would be the highly acclaimed 1.0-liter three-cylinder turbocharged EcoBoost engine that powers the EcoSport. The state-of-tune for this motor is yet to be announced.  In India though, the car will come with a 1.5-liter Duratorq diesel engine along with the petrol variant.

In Brazil, the new Ka will rival the Toyota Etios, Hyundai HB20 and Chevrolet Onix. Prices are expected to start at 30,000 Brazilian Reals (approx INR 8.2 lakhs).