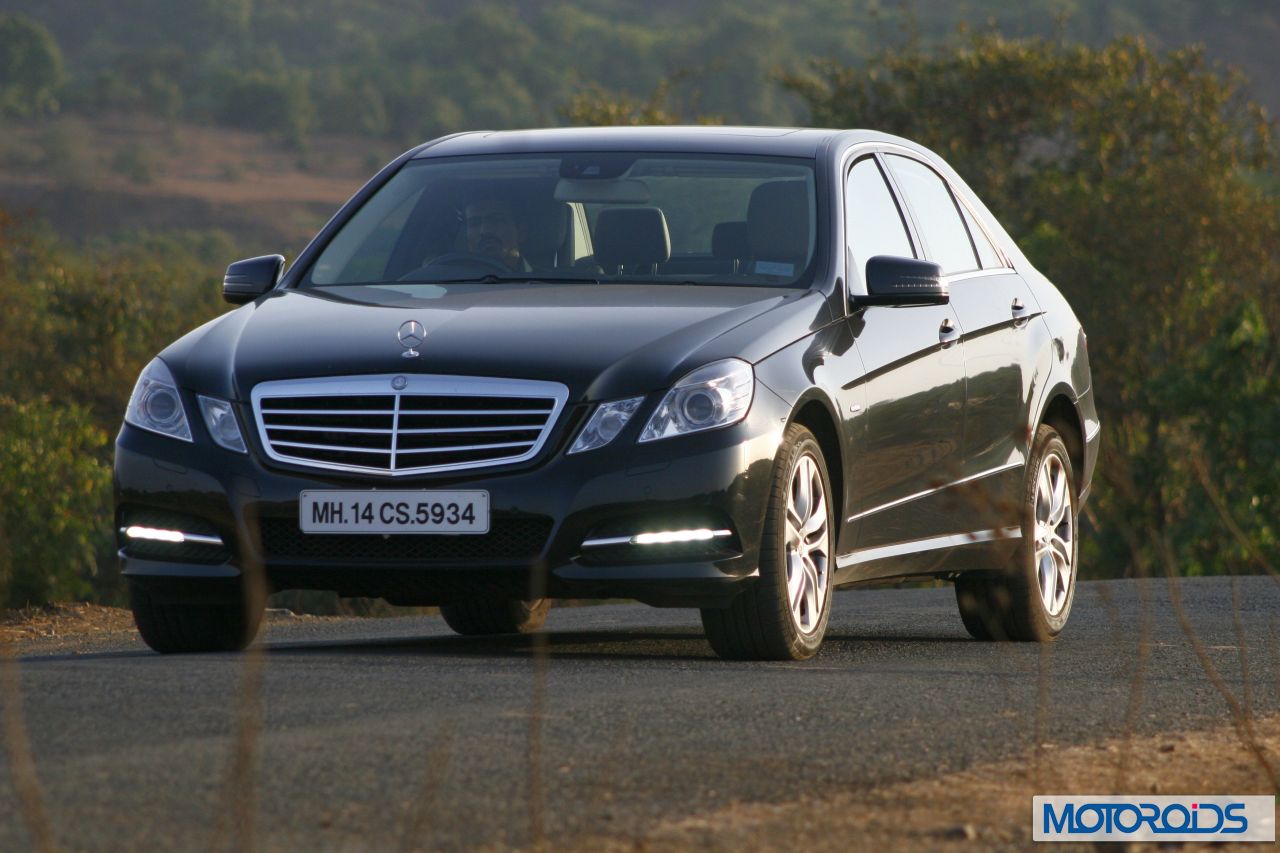 Mercedes cars have always been synonymous with luxury, class and sophistication. The E-class, in particular, which also happens to be one of the largest selling Mercedes globally has been known as the car which epitomizes the essence of a Mercedes-Benz saloon in the high-volume market. We recently drove E350CDI Blue Efficiency to experience what this mid-size Mercedes feels like. 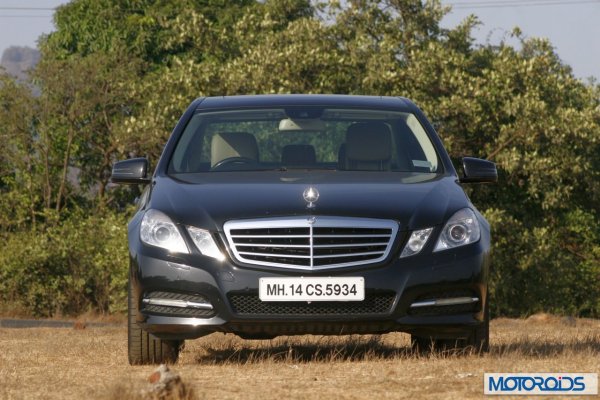 In its previous generation, the E-class had a more curvaceous look. The new E-class, on the other hand has more angular, sharper surfaces and a sportier character. The oval pairs of headlamps on the previous machine are now replaced by a teardrop shaped exterior and an elongated trapezoidal inner lamp. The V shaped grille gives this sedan a pointy nose – coupled with the slightly raised boot, the design presents a front-forward stance and exudes dynamism. 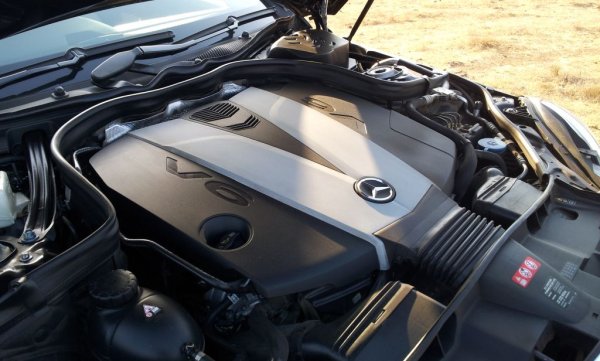 The E350CDI, following the confusing nomenclature pattern of Mercedes powertrains these days, isn’t exactly powered by a 3.5 liter engine as you would probably assume. It is propelled by a 3 liter V6 diesel which churns out around 230PS of peak power at 3800rpm and 540Nm of peak torque within a band of 1600-2400 rpm. That fat torque band endows this Merc with enviable tractability and amazing pulling power from the very pit of the rev range. The E350 CDI is also the first vehicle in India to feature BlueEFFICIENCY –a Mercedes tech which ensure lesser emissions and better efficiency. The engine is mated to the highly lauded 7 G-Tronic transmission which makes for absolutely seamless and perfectly positioned shifts.

The engine of the car is a rare gem. It’s uncharacteristically silent for a diesel mill and delivers all that power and torque in a surprisingly linear fashion. As mentioned earlier, there’s ample torque available from ridiculously low rpm and you do occasionally see the car cruising along at 1200-1400 rpm even with the auto transmission at work. There is absolutely no splutter even at the lower revs. Even as the revs build, the turbo kicks in so seamlessly that you don’t ever get to feel the transition. It is, however, after reaching the 2000 rpm mark that the engine really comes into its own and doles out bucket loads of its creamy smooth power and torque to have you smitten. 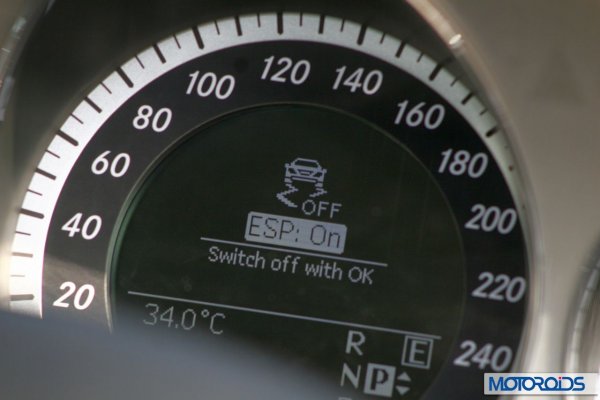 The 7 G-Tronic transmission is a beauty too. Although not as quick as some of its dual clutch counterparts, it quick enough to response to a situation calling for sudden acceleration. The highlight of this transmission, however is the smooth and absolutely jerk free manner in which its shifts ratios. You don’t even realize when the system puts the machine in a taller gear. The steering wheel has flappy paddles behind it for you to manually shift gears too. There is however a very small, but perceptible lag when you choose to shift manually. The shift points are primarily controlled by the throttle inputs and your driving style. You can also choose Sport mode to which lets the engine hold on to revs for longer. The engine doesn’t hold on to its revs as relentlessly though, as in some of the E-class’s other counterparts. 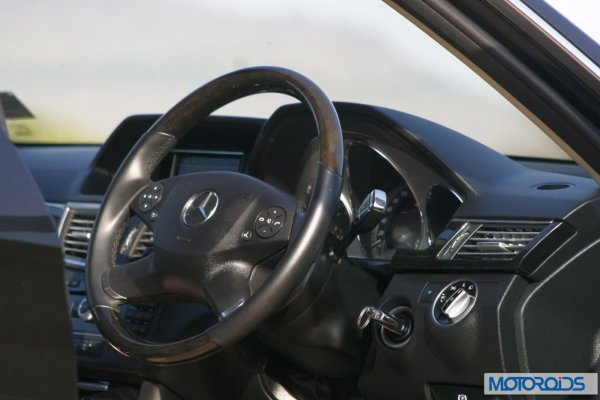 On the inside, high quality plastics and other tastefully appointed materials abound. Veneered genuine wood inserts have been thrown in to good measure. Wide, comfortable front seats and spacious and supportive rear seats – all of them draped in perforated leather, the cabin is one comfy place to be in. In typical Mercedes fashion, there aren’t too many in-your-face toys to play with. The technology to make your drive more comfortable and safer works silently without making itself too evident. There’s a classy feel to the interior as opposed to the more jazzy interiors that we get to see in some other cars in the segment. The adaptive air suspension adjusts itself for comfort or stiffness based on the driving style and road conditions. There is an option to turn the Electronic Stability Program off in case you want the car to slither around a bit, or to let it drift around corners, something the E350 CDI does happily. Not something we advise for a car this size and class though. 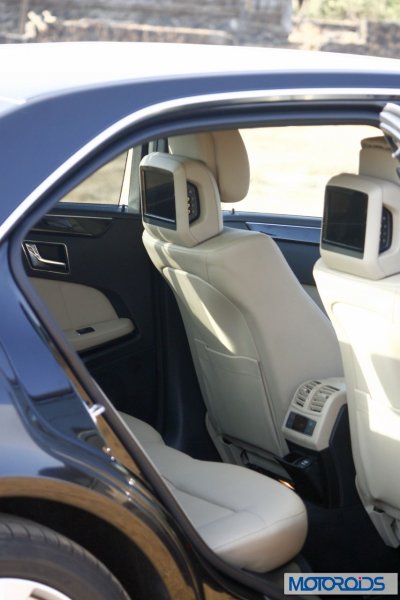 You’ve dual zone auto climate control, blinds all around, a crisp sounding Harman-Kardon audio unit, video player and dual screens for the back benchers, sunroof, memorable electric seat controls and plenty other features thrown in. The Monochromatic Rear View Mirrors do away with the need for adjusting RVMs for day and night, headlamps turn on and off automatically and adjust their beam based on the oncoming traffic, they swivel with the turn of the steering wheel and the wiper gets to work the moment the windscreen gets wet. There’s plenty of wizardry there to keep you comfortable inside. 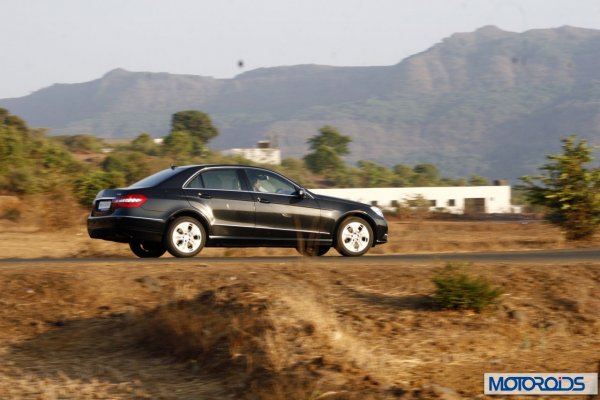 On the move, the E-class feels extremely comfortable on the inside. The ride quality of the car is exquisite, soaking in even the tiniest undulations on the road. There is no engine noise within the cabin, though we would have expected a little less road and wind noise. The enormous torque of the car being delivered only to the rear wheels means that the E350CDI slithers a wee bit when you bury the pedal while starting from a standstill. It settles down once on the move, though the suspension is on the softer side in favor of riding comfort. The steering wheel feels light for a car this size, although the car itself always feels assertively planted all the way up to 200km/h, after which it feels slightly nervous to reach its top speed of 250km/h.  The E350CDI would go from 0 to 100km/h in a little more than 7 seconds, which is impressive, except that it achieves the feat in such silky fashion that doesn’t make you realize the ferocity of it. 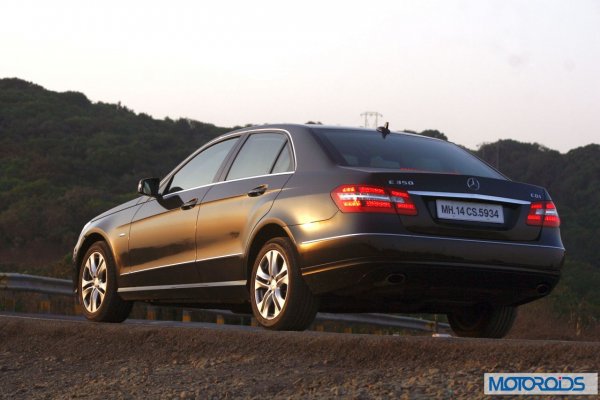 I experienced the tail happy nature of the E-class while driving the AMG variant of the car as well. At that point, I thought it was the 6.3 liter fire breathing monster which was making this saloon lose its poise. But with the 350 CDI I realized that this saloon can be a hoot for a trained drifter on a secluded track. You just have to turn the ESP off and turn in hard and counter steer to watch this baby go wagging its tail. 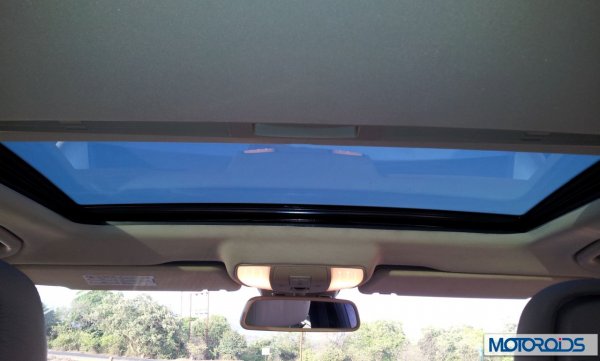 Mercedes-Benz have always had their laser like focus on safety in their cars, and the new E-class is no exception. Leading the long list of this saloon’s safety features is the innovative ATTENTION ASSIST drowsiness detection system. The system, equipped with sensors that monitor more than 70 different parameters warns you if it realizes that you’re sleepy or tired. Whether it’s those sudden steering correction, or no activity at the wheel and pedals, the Attention Assist system would warn you before you doze off and sleep with the fish. 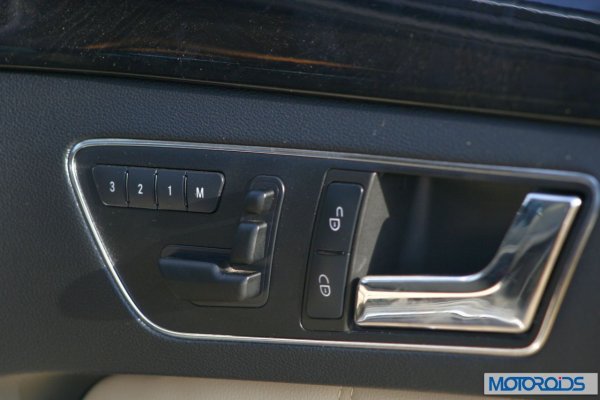 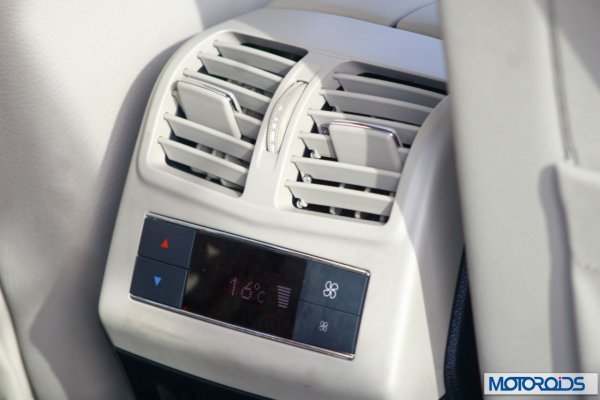 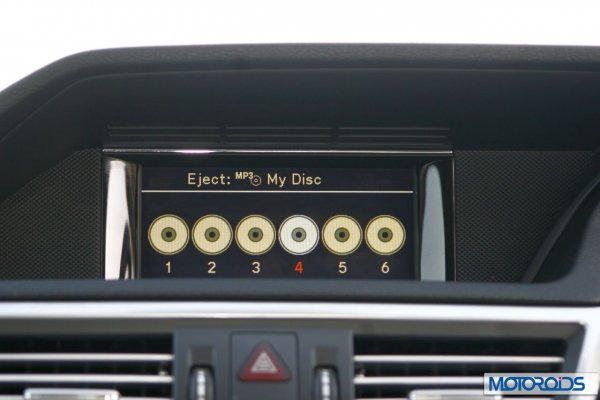 In case of a possible accident, the well though out Mercedes safety system prepares itself for pre -, during- and post- accident measures. The famous Pre Safe system on anticipating an imminent collision closes side windows and sliding sunroof. It fills air in the front seats and automatically adjusts the possible position before a collision.

In case a collision takes place, the engine is turned off automatically, doors are unlocked and the fuel supply is cut off. A crash also engages special lighting to prevent other vehicles crashing into the car. The cabin of the car is built from high-strength steel, front, side, front seat backrest and window-bags swing into action immediately to protect occupants. Then there’s knee-bag for driver to further reduce the driver’s risk in an accident. In addition, Neck Pro system prevent whiplash injuries in case of a rear collision by pushing the head restraints by around 56 millimetres forwards and 23 millimetres upwards at lightning speeds to support the heads of the front occupants at an earlier stage. 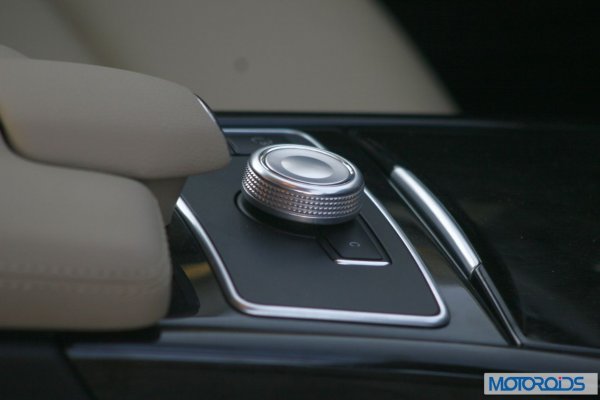 There aren’t many safer places on the road to be than a Mercedes car, and the E-class offers a liberal load of these features. You may not be able to experience most of them, but they’re there, keeping a watch on your every move, to take you home safely. I’s best you never witness them swing into action, but if ever you need, they’ll be your savior angels.

Things we’re not too fond of 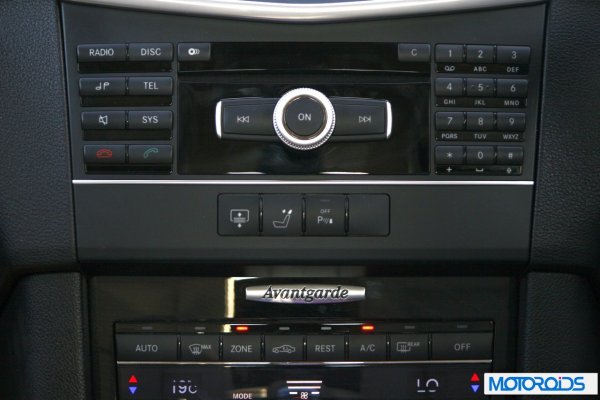 We have our little gripes with the machine too. It isn’t really as great idea to position the gear shifter stalk behind the steering wheel of the car. There is a good probability of unaccustomed drivers mistaking it for light / wiper stalk and changing the drive mode inadvertently. What this can do is, put you in neutral while you’re still on the move, and if you are not aware of the fact, and are in a situation where you need to accelerate, may lead to an untowardly incident as well. We would much rather have the gear shifter in its regular place, between the two front seats.

Then there are too many buttons for our liking. There’s a theory that suggests that most middle to old age drivers prefer buttons to menu functions, as they are easier to operate for them rather than learning new systems. Being more tech savvy, however, we prefer a giant central screen which could control everything. There could be buttons for basic functions which are used while on the move, but you should be allowed to set your car up using a menu driven interface. We could also have probably done with a heavier steering. 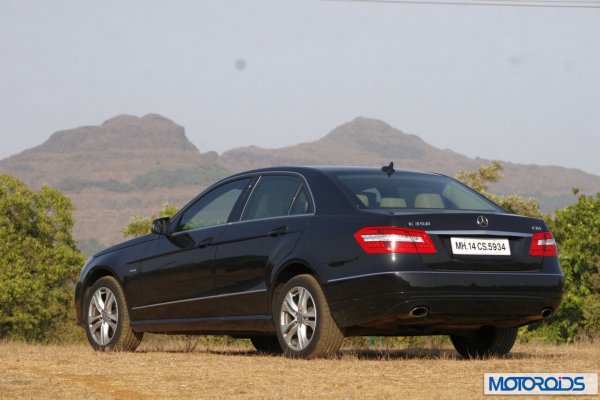 The E350 CDI is an embodiment of Mercedes-Benz characteristics. It’s classy, it’s luxurious and it’s understated. At a little more than Rs 52 lakh ex-showroom, it sure is an expensive car to own. But you know what? It needs to be that way. For the world is not equal, and all you need to do is to drive in a luxury hotel in the car and see the reactions at the gate to know why it is worth every penny it costs.