As you must already know, Triumph Motorcycles has signed a three-year deal with Dorna, the commercial rights holder of MotoGP, to supply race tuned 765cc three cylinder engine for the Moto2 World Championship from 2019. The new Moto2 engine is said to be a significant development of the Daytona 675R engine that has powered supersports wins at the Isle of Man TT, Daytona 200 and British Supersports Championships in 2014 and 2015. 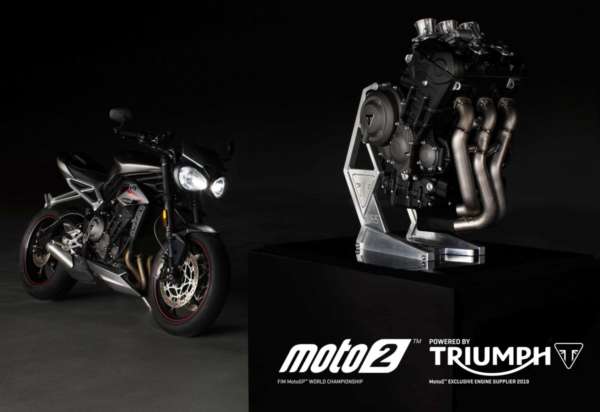 In latest updates, YouTube channel Ranic claims to have spotted the Triumph 765cc Moto2 engine testing at the Alcarras. Listen to the engine at full chat, lapping Circuito de Alcarras:

The race specification Triumph 765cc Moto2 engine, based on the powerplant that fuels the 2017 Triumph Street Triple RS, has been developed further to allow the engine to breathe more freely and rev harder than the production bike; increasing overall performance. The engine was mounted on a Daytona and given that the track is close to Triumph Motorcycles’ testing facility in Barcelona, we’re sure it is indeed the new Moto2 engine.