Honda has a huge portfolio of motorcycles when it comes to the global market and they have been a little slow when it comes to getting the exciting, yet, affordable stuff to the Indian masses. The Indian two-wheeler space has grown more mature over the years and has started demanding more from automobile manufacturers. There are a lot of motorcycles in the International market which would make a lot of sense once they get launched in India. One such motorcycle was recently launched in Thailand – The Honda CMX 500 Rebel Bobber. 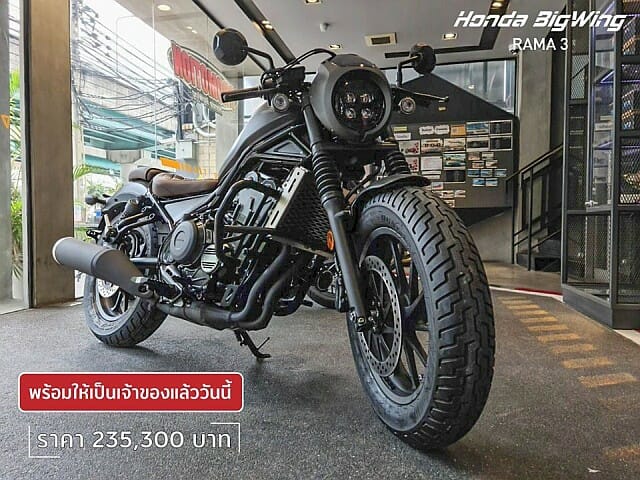 The CMX 500 Rebel Bobber might be a modern-day retro cruiser but its brutish appeal makes it stand apart from the rest of the crowd. It was launched as a limited edition motorcycle and only 100 units are made available for sale. Talk about exclusivity! Honda launched it at 235,300 Thai Baht (Rs 5.43 lakh approx). It differs a bit from the standard variant of the CMX 500 Rebel as it sports some cosmetic upgrades over it. The front now gets a blacked-out headlight cover and fork gaiters which lends it that bulky cruiser feel at the front. Other cosmetic changes include a quilted brown seat, special fuel-tank cap, a matte-black crash guard, and a new brake fluid reservoir cap.

It continues to draw power from the same 471 cc parallel-twin engine which does the duty on the standard variant as well. The motor is good to belt out 47 hp at 8,600 rpm and a peak torque of 43 Nm at 6,500 rpm. We would really love to see the 500-cc range from a Japanese manufacturer to hit our showrooms soon. The current scenario indicates that the affordable performance motorcycle segment in India is proving to be very fruitful for the manufacturers. The reason why we are seeing many manufacturers entering the Indian market using this segment as a portal to make their way in. Honda has a lot of interesting propositions in their portfolio which would make complete sense once launched in India. The most interesting ones being the Rebel and the CB 500X. We just hope that Honda brings in their premium motorcycles to our shores soon as it will definitely liven up the competition!