Kawasaki Ninja 300 was a very prominent motorcycle in the Japanese manufacturer’s portfolio, appealing especially to the riders who were more into sport touring or wanted a motorcycle with that ‘Big Bike’ feel. It might feel dated now because of the onslaught of the well-equipped competition but Kawasaki is buckling up to ‘Charge-up’ the Ninja 300. The idea of an electric sportsbike from Kawasaki based on the Ninja 300 has been floating around for a very long time now with Kawasaki constantly teasing us with frequently released teasers and now they have released a set of videos showing the development of this EV. 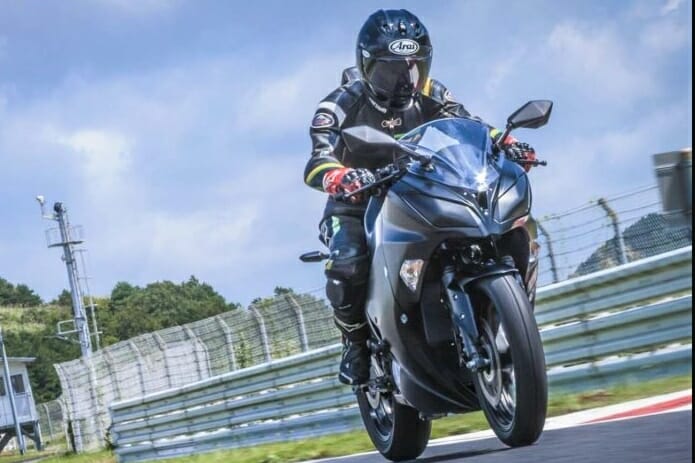 The latest addition to this video set showcases the manual transmission of this Ninja 300 based EV where Kawasaki is boasting by saying ‘Shifting your impression of EV bikes’.  The whole video package began with Kawasaki stated to be “developing the high charged thrills of tomorrow”. The video features a fully-faired prototype, which features a conventional gearbox and the bike has been developed according to Kawasaki’s ‘RIDEOLOGY’ philosophy, which focuses on the machine being fun to control, exciting and reflects the bikemaker’s passion to build desirable motorcycles. Throughout the development phase, Kawasaki has been thoroughly studying and patenting several features, which range from chassis geometry and packaging to thumb-brake activated energy recovery systems and transmissions.

Learnings from the development work being carried on the prototype will be infused in the next-generation Kawasaki motorcycles which are currently in the works. The bikemaker promises that these new motorcycles will retain the ‘Fun’ part associated with motorcycling, keep the good times rolling and bring a smile on the rider’s face.

The prototype is equipped with a DC fast charger developed in Japan and it is capable of replenishing back to 100 percent in just half an hour. It bears stark resemblance with the regular Ninja 300 and share most of the mechanical bits like the suspension system, braking unit and even the wheels. It uses a trellis frame though, as opposed to the diamond type frame to accommodate a big battery pack and an electric motor. In place of the six-speed transmission you could find in a regular Ninja, the electric version uses a four-speed unit.