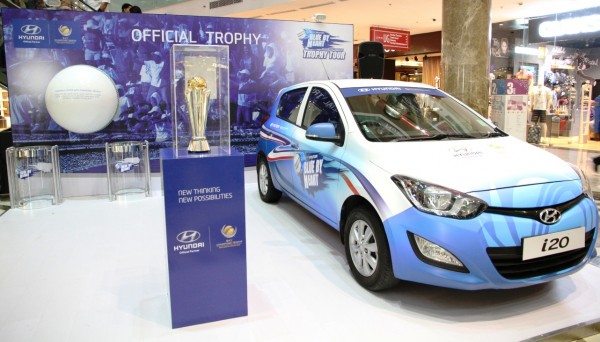 Hyundai Motor India Limited (HMIL), the Indian subsidiary of Korean auto giant Hyundai Motor Corporation, is the official partner for International Cricket Council (ICC). The car maker today hosted an exclusive preview of the ICC Champions Trophy 2013 in Delhi at Ambience Mall, Vasant Kunj. With this, the Trophy Tour commences from New Delhi and will be followed by Mumbai and Chennai.

The trophy will be on display in Delhi on May 20- 22, in Mumbai on May 23- 24 and in Chennai on May 25. With the commencement of the trophy tour, Hyundai India has launched a range of contests for Hyundai and cricket fans of the country. The fans can come to the malls and SMS – BBH to 5262 and 5 lucky couples from Delhi, Mumbai and Chennai will win an exclusive Champions Dinner with the Champions Trophy.

Speaking on the Trophy Tour Mr. Nalin Kapoor, Sr. General Manager & Group Head, HMIL said, “As the official partner of ICC Champions Trophy 2013, it gives us immense pleasure to organize the ‘Trophy Tour’ to give our cricket fans firsthand experience. We are confident that Trophy Tour will build excitement for the upcoming tournament and further strengthen Hyundai’s association with ICC in a nation where cricket is passion. We are very keen to engage with our customers through exciting activities planned for the coming months.”

ICC’s General Manager – Commercial, Mr Campbell Jamieson, said, “The initiative taken by Hyundai will provide the followers of the game and supporters of cricket in the three cities with an opportunity to get closer to and feel the thrill of the ICC Champions Trophy 2013. The ICC Champions Trophy is a tournament of the elite in which the world’s best cricketers go head to head in a nation versus nation contest. I’m sure the trophy tour in India will ignite the buzz and add to the excitement as 15 matches will be played over 18 days with no team in a position to lose more than one match.”
Additionally Hyundai Fans can visit the select malls for a preview of the trophy and will also get an opportunity to click pictures with the trophy. The fans can also follow the current location of the trophy on Hyundai’s Facebook page (facebook/HyundaiIndia) and Twitter handle (@HyundaiIndia). Facebook fans will get an invite to the events of trophy tour activities.

During this season, Hyundai Motor India in association with ESPN Cricinfo has launched the Hyundai Cricjockey, which promises to bring joy to few lucky cricket fans of the country. As a part of their Blue by Heart campaign (www.bluebyheart.com), Hyundai Motor India would organise this contest which would be available online and mobile platforms. Cricket fans need to watch a cricket video and submit their commentary. Winning Hyundai Cricjockeys will get an opportunity to see the actual ESPN Cricinfo Studios in Bengaluru city, where they would learn the entire cricket reporting procedures and also get to do Live Google+ Hangouts with the Editorial Team of ESPN Cricinfo during the champion trophy matches. The grand winner will get an opportunity to write an entire cricketing blog on the main ESPN cricinfo website. Apart from these Cricjokeys would also get prizes like smart phones, tablet and music players.