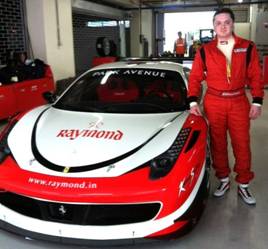 Mr. Todt had commented, “India is developing as a country and there is obviously a increase in the enthusiasm from people towards the super cars of the world. It’s great to see Mr. Singhania, who is so passionate about motorsports to take this initiative and fulfill dreams of thousands to be able to witness the best cars in the world on the streets of India.”

It will be really interesting to see Mr. Gautam Singhnia behind the wheel of India’s only 458 Challenge.