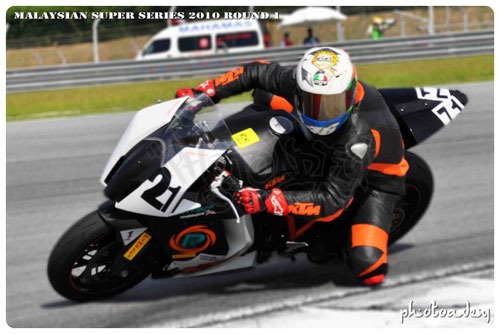 Dilip Rogers wasn’t at the peak of his health owing to a few injuries he was succumbed to during last month’s Asian GP. However, this did not act as a barrier to his victory in the Malaysian Super Series Round 1.  The Malaysian Super Series was held last weekend at the 5.5 km Sepang International Circuit. Chennai Ace Dilip Roger was subjected to a fitness test a day prior to the race which he passed with a slight discomfort though. The injuries did not bother to bring down the confidence of the team management of Malaysian Planet Cycle, Penang, Malaysia, headed by Mr. Kenny Lee over the young Indian racer’s skills. Dilip raced on a KTM RC 8 R 1198 cc (V twin) and finished 9th in the qualifying and managed to finish 5th in the Race 1. He pushed himself to the 5th place in 8th lap. In the Race 2, he managed to finish 4th bringing him his second podium finish of the Round 1.
“I would like to thank Mr. Kenny Lee and all the team Members for the trust imposed in me – despite being my not being fully fit – for giving me this opportunity race  at Sepang.  I would also like to thank Mr. Selvaraj Narayana, KTM Austria who won the AMA and super cross lifetime achievement award in 2008,” said Dilip.
News
,
Comments
Leave a Reply Cancel reply