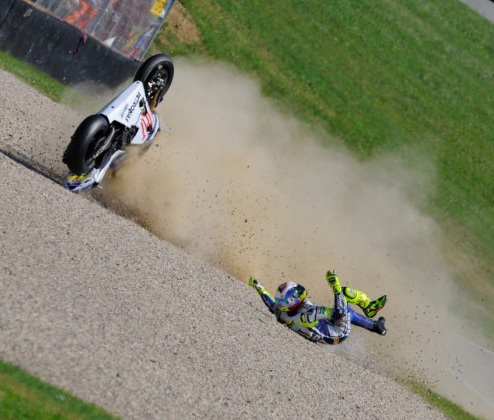 [Update: Doctors have succesfully operated Valentino’s fractured tibia. A two and a half hour long surgery has gone successful and Rossi will be able to walk after a period of ten days, with the aid of crutches though. His condition will be re-evaluated after six weeks, till then Rossi will have to stay on crutches. It is indeed a sad incident, but lets hope that the Doc recovers soon!]

2010 season isnt going great for the 2009 Champion. The first round of the season was good as The Doctor was able to secure the top spot and earn 25 points but a week later an injury at a Motocross training made things go in the wrong direction. His 3rd place at Jerez and a 2nd at Lemans were consequences of the shoulder pain Rossi was suffering from. It was the Mugello circuit where he could have made his comeback but even that is not possible now as Vale crashes again at the Mugello race track during FP2 today. This is the first time he is not able to race at his home circuit  Mugello in his whole career.

The practice session was going fine and Rossi was the fourth fastest among the riders but just 15mins before the session was about to end, Rossi had a highside which threw him off the bike and he landed hurting his tibia(the bone between knee and ankle). He had some difficulty while standing post his crash. So he was taken to the medical center on a stretcher where his fracture was diagnosed. He was then taken to Careggi Hospital in Florence for a further medical examination. Doctor Macchiagodena of the Clinica Mobile told that he will be shifted to the orthopaedic trauma center where he might be operated. There are chances that his operation will take place sometime later in the evening today.
The practice session ended with Lorenzo posting the fastest time of 1’49.282 , followed by Dovisiozo, Pedrosa being 2nd and 3rd fastest respectively. Fourth fastest was Rossi, who with a fractured tibia wont be able to make it to the race on Sunday. Fifth fastest was Randy de Puniet followed by Stoner and Hayden.

MotoGP has posted the video of Rossi’s crash here.

The Qualify and race results for GRAN PREMIO D’ITALIA TIM  will be posted soon. For further updates follow us on our new site too.