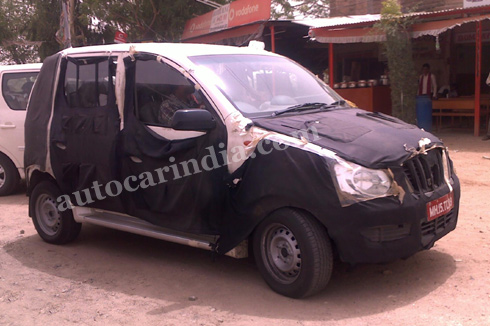 Outgrow your Sedan! That’s what they said when they wanted to grab public attention towards the Mahindra Xylo. But I guess the Sedan was too outgrown that made M&M think more and launch a smaller version of the Xylo. Well! They haven’t launched it yet. But our friends at Autocar have managed to get a spy picture of a 5 seater car based on the Mahindra Xylo. The spy picture has been tracked from Rajasthan where it was being tested. The car will kick away 12% on excise duty due to its smaller size.
It is quite clear from this that Mahindra has plans to put its foot into the small car market which is growing at a rapid rate. However, in order to bear the small car tag, the ‘Mini Xylo’ will have to be less than four meters long and should posses a diesel heart of less than 1500cc. Thus, we expect the new car to feature a chassis which will be based on a shortened version of the Mahindra Xylo. The Xylo engine is a 2.5-litre m-Eagle engine. Well, we’ve had the M-Hawk and M-Eagle already! Expect the new engine to be tuned down to about 1.5-liter by eliminating a cylinder and a few more tweaks in the Bore and Stroke. They definitely won’t name it the m-Duck though!
The new car will have only two rows of seating making it a 5 seater MPV. The Mini Xylo may come with a price tag of about 5 lakh INR. Stay tuned as we try to dig more on this topic.